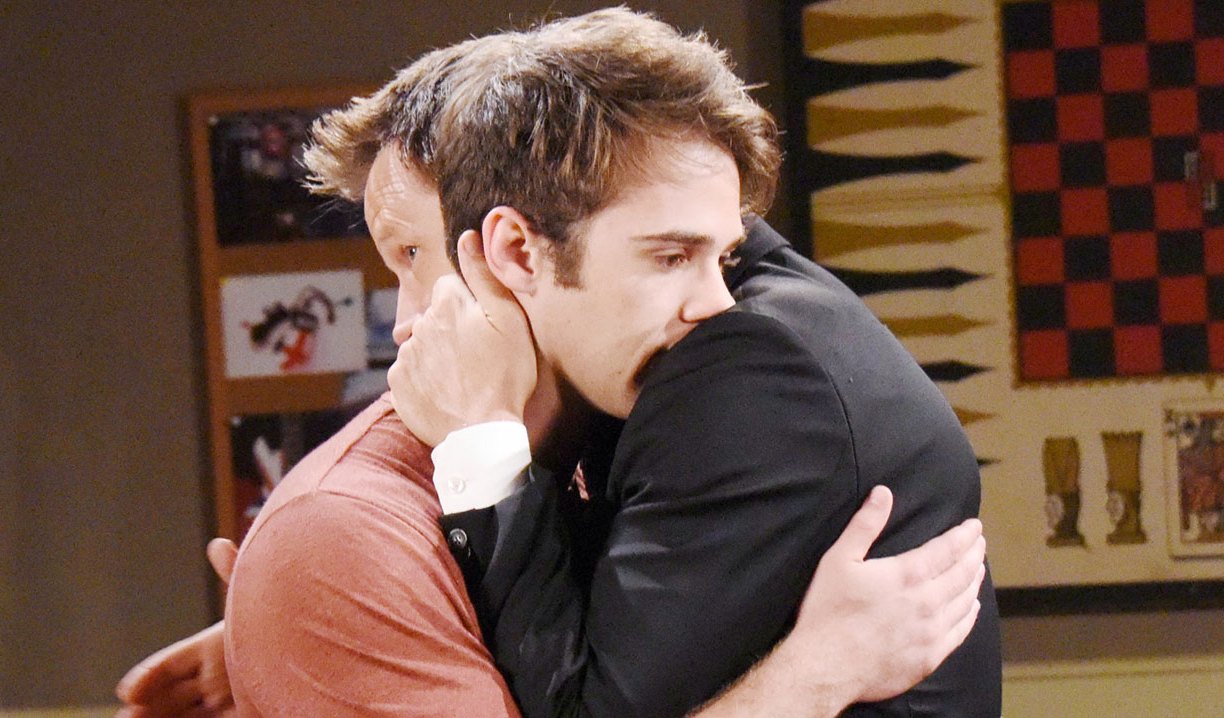 I’m Lori and I’m filling in for Christine while she’s on vacation. It was Christmas in Salem, but JJ preparing to kill himself cast a dark shadow over most of the week. There was also unexpected possibilities presented for a few Salem couples, while other pairings need some work.

Pulled back from the brink.
JJ detailing how he was going to shoot himself in the same spot, with the same gun as he did Theo was chilling. Casey Moss did an excellent job in these scenes and it was great to see Jack, whose energy would be a welcome return to the show. It was also nice to see Theo upright and speaking after weeks of him lying in a hospital bed. However, I'm not a fan of standalones and re-created flashbacks so I wasn't that emotionally invested until that last scene. I seem to be in the minority though, as when I asked our readers on Twitter what they thought, the responses were overwhelmingly positive.

I loved the episode. I am still emotional! Casey did an amazing job! Loved the flashbacks with Jack. The letter writing was heartbreaking.

Very powerful & heart-breaking episode. I was blown away by @1CaseyMoss who delivered such an emotional & gut-wrenching performance. I really felt JJ's despair. Thank you @carlivatiron for writing this. ? #DOOL

Although, there were a few dissenters on Twitter that felt like too much focus was being placed on JJ without equal time devoted to Theo and his family. I tend to agree. I mean, as many times as we've seen JJ's flashback of shooting Theo, why can't we get a coma induced recollection from the victim? Or a deeper dive into Abe's point of view and anger, which, James Reynolds is portraying beautifully by the way, and Jennifer needs to respect more. I understood where she was coming from when she appealed to Abe, but I thought it kind of disregarded his anguish. I also would like to see more conflict in Lani. Yes, she's a cop who might empathize with JJ, the man she loves, but he also put her brother in a coma! You'd think she'd be wrestling with forgiving JJ more.

My problem has to do with the lack of balance. We get to see JJ's pain and struggle but Theo and Abe's got pushed aside. I want both. #Days

As Christine mentioned in last week's Deconstructing DOOL, Eric was a good choice to get through to JJ, but nope. It was Gabi who prevented him from killing himself. It seemed like an odd choice, but then she slipped into a t-shirt to innocently spend the night with him so that Lani could walk in on them. Of course Lani then ran straight into Eli's arms. I'm all for a messy quadrangle, but it felt like a cheap follow up to the emotional suicide arc.

Sonny gets what he wants.
Sonny pushing his agenda on Will is getting on my nerves, but to be fair, Will is an idiot for agreeing to move in with him. Ignoring the fact that Will has more chemistry with Paul and I'd like to see him sow his wild oats, Sonny took a leave of absence from work to plan his wedding. Does Will think Sonny's going to give his returned-from-the-dead husband the space he needs to figure out how he feels now that they're under the same roof? Sonny filling Will in on their past was sweet, but maybe they should have done that over drinks before Will moved into the same house with Sonny and his entire family.

If those two are headed towards a reconciliation, where does that leave Paul? If this were a straight love triangle, Paul would probably be crying in his future love interest's arms, instead of his dad's. Which is the problem with LGBTQ storylines in daytime. There are very limited options. If all three characters are staying, they're going to have to bring on another gay character unless one of them remains celibate. But I'm hoping for the former.

A fine line.
Fiery adversaries usually make for great sexual chemistry and Brady and Eve are no exception. You just knew something was going to happen, even if the kiss was all part of Brady's underhanded plan. I'm digging their vibe and love how much fun the actors seem to be having slinging insults at each other. Hopefully a few hate-sex romps will be in their future. And as much as I love Brady as a snarky, bitter drunk, I was happy to hear Victor call him out about his drinking. But if he doesn't want his grandson to drink, maybe Uncle Vic should put away the fully stocked bar cart that greets Brady every time he enters the Kiriakis gathering space.

Bratty teens.
Claire comes across as weak and frail and Ciara is trying too hard to be a rebel. I see potential for nuCiara, but she needs to get on the other side of her anger before I can warm up to her. I do like Tripp though, but he needs a much more mature woman in his life than Claire, or Ciara for that matter. For the moment, he's kind of stuck in the same spot as Paul with no other options on the canvas. Unless they bring in someone new for him, maybe he and Paul can console each other?

These are just my thoughts on the week in Salem. Tell us yours below and have a Merry Christmas!