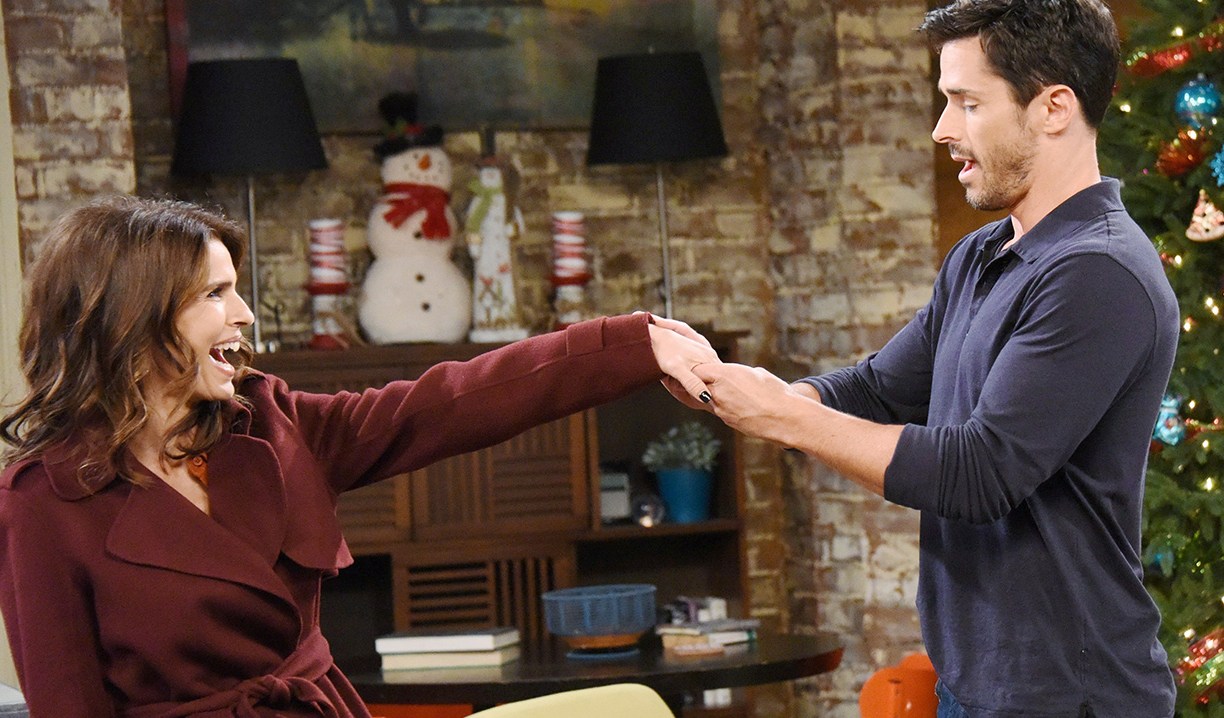 The show has been reinvigorated since Ron C came along but the ratings are still dead last and after five months there are still loads of fans refusing to watch and not enough new interest. Those fans who are not watching for one character in particular are getting bored, claiming not to be riveted by some of the outlandish storylines such as Zombie Will or Sami breaking a serial killer out of the sanitarium to strangle Will so he’d get his memory back. They say they’re annoyed by repeated storylines and the constant writing for shock value. I enjoyed this week but am wary of the pandering to the hardcore fanbases and I’ve noticed some missed opportunities…

Last week of Sami-eccentric episodes.
While I enjoy Sami, and was glad she returned, I won’t miss how unhinged and manic she was. We got a lot of touching scenes between her, Marlena, John, Lucas, Eric and Roman but not enough time with Kate. I figured Will would be thankful Sami was heading home, you know, the way you’re relieved when that house guest from hell finally hits the road, but no, instead, literally out of nowhere, and for no good reason, Will forgave Sami for the strangulation-recreation. Talk about pandering. We were robbed out of Will being angry with his mama for longer than twelve minutes. It’s a missed opportunity.

Perhaps the strangest line of the year, Will forgiving his mother for what we’re referring to as the ‘strangulation-recreation’. ? #Days #DOOL #Daysofourlives pic.twitter.com/HBbvx3VmwX

Silly and tired?
Sami lied to Will about Hope’s engagement ring being hers – twice, but she didn’t have to explain it. It was an amateur move as was putting it on her finger. Using her tears to get the stuck ring off was cute yet familiar. Blowing her nose into the tissue and shoving the ring in there to give to Rafe was nasty and unnecessary. Sort of a tired joke. Rafe proposing to Hope hours after he still had the stank on him from Safe sex had an ick factor to it. I’m not sure why they keep trying to revive this couple when most fans seem to have it in for Rafe. Are we supposed to be rooting for them as a couple or for Hope to get a clue? And now that the secret is out, will Ciara spill?

I can’t wait for Will to see Hope’s ring pic.twitter.com/gZjlDArjWK

The DiMeras really should start locking their door.
Everyone seems to be letting themselves into the DiMera mansion, something that didn’t happen often when Stefano was around. Where was Harold when Steve, Kayla and Eli let themselves into the mansion? Have they cut back on the butler’s hours? I like to think Harold and Henderson were at the pub being served by Roman and sharing stories about their employers!

Whining for a quote.
Jennifer went from mommy mode, worrying about JJ to Abigail, to aggressive journalist with Chad when she practically forced him to give her a quote about Theo’s warehouse break-in. I was offended on Chad’s behalf. It felt like a conflict of interest and she sounded so whiny and repetitive, telling Chad that her team would keep digging if he didn’t give her a quote. Did she think Chad was hiding something? Please. He’s no Stefano. Oddly, Chad did find his DiMera voice and vowed in his most intimidating way that if any DiMera was involved he’d “take care of them personally.” Now that Steve revealed her as being behind Theo breaking into the warehouse, should Kate be shaking in her Prada boots?

Sonny goes bananas.
Brady was rude to tell Sonny about Will kissing Paul. It wasn’t worth alienating himself from his brother, but the quarrel showcased both men at their absolute worst which made for a spectacular argument. Sonny pushed Paul further away if that’s even possible and then ran to Will, beating his chest and telling Will ‘me want husband back’. And. It. Worked. They bypassed what could have been months of story in favour of rushing things for a photo opp at the Christmas ornament hanging. Oy. As mentioned last week in Deconstructing DOOL, Sonny’s been a jerk too often. Will he soon push Will away in favour of Titan?

P.T.S.D.
If anyone could help JJ with his guilt over shooting Theo it should have been Eric. I found his advice to be lacking though his demeanor comforting. He had a perfect opportunity to describe how he overcame his own demons but we didn’t get to see that. At least the verdict is in and Monday we’ll find out if JJ’s going to prison or not.

Nod to defunct soaps:
How endearing was it that they gave mention to Kassie DePaiva’s former characters on “Guiding Light” (Chelsea) and “One Life to Live” (Blair) in that scene between Brady and Eve. It’s a nice reminder of our lost soaps. Plus, that’s an intriguing eye-opener as to what Eve’s been up to!

This is my opinion – popular or not, share your own in the comments!

Will, “I’m sorry for hurting you.”
Sami, “I’m sorry that I sicced a serial killer on you.”
Will, “Apology accepted.”
Marlena, “It’s a Christmas miracle.”

“A bunch of stories written by dead people,” JJ says about the bible before reading Exodus.