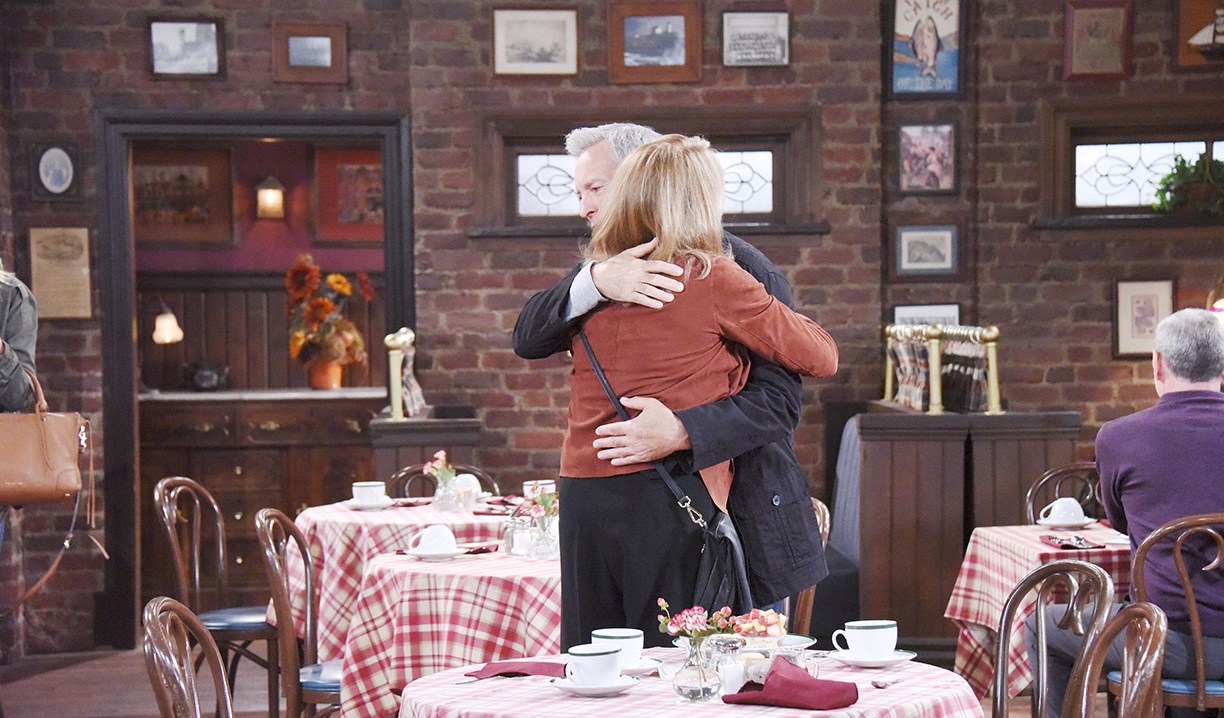 Another remarkable week in Salem filled with arguments, romance, scathing sexcapades and bitterness. There were a few more minor deleted scenes this week, (click on each to view large) but they didn’t detract from the show. While most viewers seem to be enjoying the show, several have yet to return to watching, still feeling the sting of Higley’s past mistakes. Others say they’re not enjoying the repeat of old storylines Ron C is bringing to the show.

One thing we can count on in life – Salem police never change.
Ex-FBI agent, Eli finally took time out of his hectic schedule to follow up on the massive lead Eve gave the SPD a month ago on November 9. Yep. And Brady’s even dumber than we thought. He could have thrown Nicole under the bus by now or hightailed it to his cabin in Canada and his farm supply store or whatever it is “Days” writers think that people own in Winnipeg. Hehe So now, because of Brady’s stupidity in setting Eve up, he’s the cop’s number one suspect. It makes me wonder if that’s why Nicole’s returning. Because he’s going to turn her in. Incidentally, it was about time somebody told Brady that he’s been ignoring Tate!

Safe sex.
It’s been a while since we’ve seen some Safe sex. Most loved it. Others thought it was hot but wrong! Because it’s a soap, we automatically wonder if Sami’s pregnant. After hearing her pour her heart out to Rafe and him accepting Hope’s desperate proposal, I hope she never learns the truth. How painful would that be?

Belle needs to return to Salem permanently.
It’s been good to see the force that is Belle back. I’d say it’s good to have Shawn appear too, but we’ve barely caught a glimpse of him. Belle telling Will that he cheated on Sonny was an ‘oops’ moment but it made me laugh. Finally, somebody doesn’t want to treat him like a Snowflake. I wanted Belle to ignore Marlena and tell him the rest of the story to at least put it in context. The best and worst line of the week was Marlena citing the reason Will cheated to be due to “extenuating circumstances.” That’s bloody absurd. Will took off to discuss it with Paul, not Sonny, which was surprising. The whole scene was unusual. Like us all, William couldn’t help gawking at Paul’s rockin’ body, but he was lewd about it, flirtier and more confident than we remember. That kiss! He has an edge to him that I may be enjoying and he sure doesn’t seem to like Sonny. I’d feel sorry for Sonny if he hadn’t been a jerk one too many times this year to Paul. Some might call that Karma.

Belle and Sami’s fight was so juicy. All that was missing was hair-pulling or a cake for them to throw at each other. Sami got a reality check about how self-serving she is, and we got another Stan mention! Last week as was discussed in Deconstructing DOOL, Sami acted more like a DiMera than any of the DiMeras on canvas now. Belle threw it in her face. It only made me miss the old-style DiMeras, not our watered-down batch.

Paul Narita in a towel, BLESS you @carlivatiron #Days pic.twitter.com/NJgNPgSCoL

She’s back. She’s bold. She’s sassy.
Nu-Ciara’s return is timed out well with Sami leaving next week since she needs to get back to the kids. Ciara has that fire that we need, the same fire that Lauren Boles gave to Ciara as a child. She has attitude too and is darker. It promises good times ahead for some but not everyone’s into it…

Whoa. What is up with Ciara? She’s acting really wacko. She’s scaring me ??(in the voice of Dough Heffernan). Why have they turned her into another Sami??? #pleasemakeitstop — Marge Anderson (@MargeIsHere2) December 7, 2017

Eve to Brady, “Looks like somebody woke up on the wrong side of the Bloody Mary.”

Will to Paul, “So, tell me…was the sex between us good?”

Deconstructing DOOL: It's Bad When a...