Deconstructing DOOL: It’s Bad When a Murderer Calls You a Sick Monster 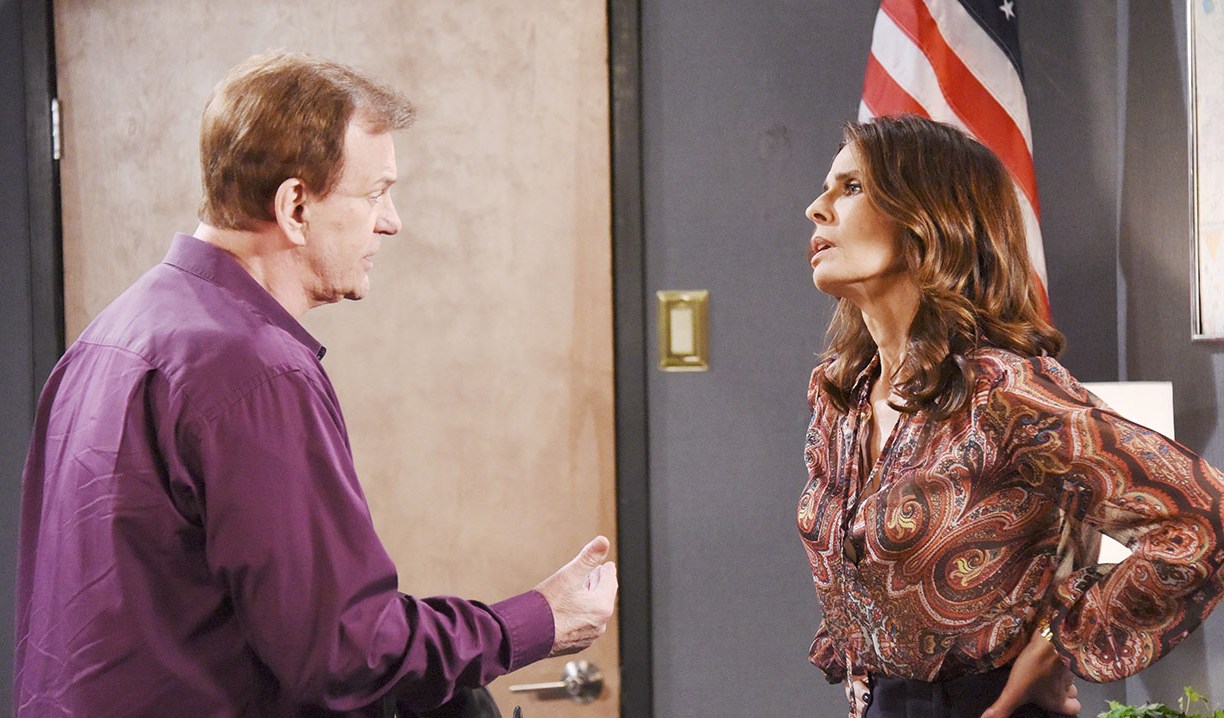 Another must-see week, with a lot of yelling and crying and crime amongst Salemites. Thursday’s episode is probably the most brilliant we’ve seen in years. The acting was superb, the storyline compelling, the dialogue perfect, and I’ve been trying to remember for weeks, the last time we had an umbrella storyline including the Horton, DiMera and the Carver families. There were a lot of cut scenes these past two weeks and here are the photos. Don’t you wish they’d put them in a blooper reel on YouTube or something?

Abe and JJ finally have something in common.
In the aftermath of Theo’s shooting, most of us are finding Abe’s abrasive behaviour  freakishly annoying. All that bellowing! It doesn’t help that he conveniently forgot that he was in the same position as JJ in the past. Though I’m not discounting how devastated poor Abe feels, he needs to put himself in JJ’s shoes and take his yelling down an octave or two. But nope, he’s gone off his bloody rocker.

In a surprising twist, JJ broke things off with Lani, which was a selfless move and shows the depth of his guilt but I wasn’t too broken up. They’ve never had many scenes together so it was difficult to invest. It might have mattered more if there was some deliberation or angst before he cut her loose. Some fans think it was done to pave the way for Eli and Lani.

I’m not sure what to think about Eli’s accusation that JJ shot Theo because he saw a black man holding a weapon. I know that it’s a topical reference to Black Lives Matter and the thought of anyone being shot because of their race takes my breath away, makes my heart pound fast, and my stomach churn. Still, it’s conjecture. Nobody knows what JJ saw that night but JJ.

All fired up.
Abe was impulsive, ordering Hope to fire JJ. I like how she refused him, reminding the mayor that he chose her to be police commissioner because he trusted her judgment. He must have felt like that was a slap in the face because immediately after, he fired her. It was unexpected and not really warranted though maybe as a case for insubordination. I felt indignant on her behalf, even though I didn’t root for her becoming commissioner in the first place. Of course, like Lani and JJ, Rafe went to confront Abe on his fiancee’s behalf, and once again, it oddly worked out – but for JJ and Rafe, not Hope. It’s a good move to have Rafe as interim commissioner and reinstate Hope after JJ’s case is solved but was this an opportunistic move on Rafe’s part? He thinks he can do a better job than Hope and maybe he can, but his admitting it was a d*ck move. It sure inspired some terrific dialogue from Hope during their fight which has been the only highlight in their dull relationship. Now that they’re over, (for now?) we’re already seeing that Rafe’s going to drown his sorrows in an equally devastated Sami. Ooh the drama!

Good parenting.
Steve dropped into the loft just to see how Tripp was dealing with Theo’s shooting. It was a brief but sweet scene that made me happy, especially since so many soap parents are narcissistic. See below…

Good idea. Let’s recreate Will’s death.
I love the scenes of Will meeting a new family member organically and in unusual settings. It’s so much more interesting than a two second conversation that he could have had at a big family meet-and-greet party. He’s taking it all so well, which I find odd. My favourite scenes are Will with his grandmothers. I felt bad for poor Lucas who has been drunk since August. There must be some record there. But amongst the pain there was humour. Lucas told Chloe that Will was alive but after him crying wolf so much, she just assumed it was a drunken hallucination. I admit I laughed.

Sami forcing Ben to recreate Will’s death was sick, twisted, outrageous, ridiculous, intriguing, criminal, uh and made for some excellent drama and fine acting from Chandler Massey, Ali Sweeney, Robert Scott Wilson and Bryan Dattilo. Sami calling herself a DiMera and carrying a gun while directing her goons is a little scary! Somehow, she broke Ben out of Bayview and used his old apartment for the trauma recreation which raises some eyebrows. As mentioned in last week’s Deconstructing DOOL, Will has been bland, without fire in him. That wasn’t the case this week. He’s been very reserved, eager to please and ready to accept his friends into his life until Thursday. Instead of being patient for him to possibly remember something, Sami told Eric she’d risk anything for her children, but her forcing Ben to recreate Will’s murder was purely narcissistic. Even Ben, the Necktie Killer, could see that. Hell, even he felt remorse. It’s pretty bad when a murderer calls you a monster, sick, in need of a padded room, wacko and a terrible mother! She got an earful from Will who spewed venom at her like a spitting cobra. It was amazing.

Unpopular opinion time: I cried for Sami when she lost Will. Yep.

Wilvis’ best scenes are with his grandmas. #Days

It’s no secret that I love Sami, but I also love the way Will’s bopping around town having heart to hearts w/everyone except her. #days — Christine (@sixxers) November 28, 2017

Even that fkin flashing red & green light is back… Damn. #Days

Safe reconnects.
Many were reminded of Sami and EJ’s grief sex when Sami went down that road again with Rafe this time and sought comfort in his arms after losing Will because of her stupid antics. I understand that both are tortured but they can’t keep it in their pants for five minutes? Sami’s making out with her Aunt Hope’s ex-fiance of two minutes ago and just as Hope is registering with help from Jennifer, why she’s so afraid of commitment, Rafe’s ready to give it to his ex. Just. Like. Hope. Feared. There are no words.

Hope to Rafe, “Make sure you read the files very carefully since when the shooting went down you were out of town, without notice, without permission, with your ex-wife.”

Lucas to Will, “I tried so hard but winning is just not my thing.”

Sami, “I’ve waited to look this sack of human waste in the eye.”

“What you did was beyond twisted,” Will says to Sami.

Sami to Rafe, “I snuck Ben Weston out of that nuthouse to attack Will. Again.”