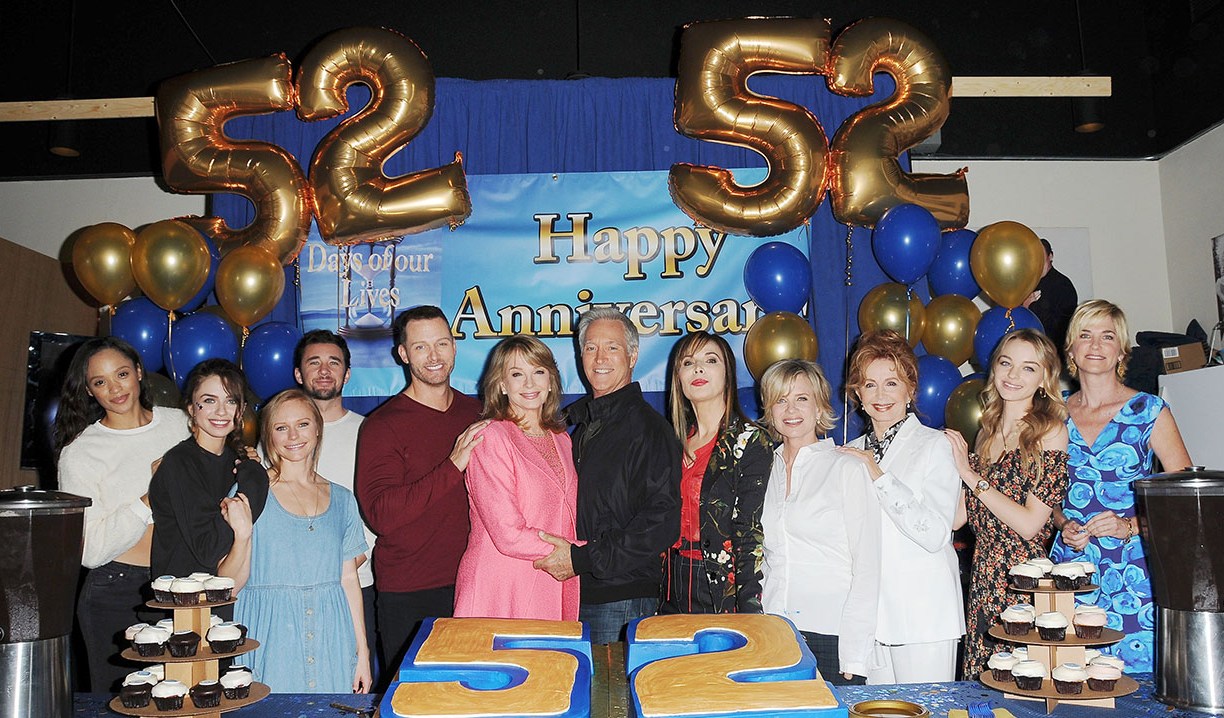 “Days of our Lives” celebrated their 52nd Anniversary! Soaps.com sends congratulations to everyone at the show.

This week saw a few big reveals and cliffhangers, twists, and turns and while numerous found the week entertaining, many viewers are getting antsy about this whole Will reveal, which is taking more time to unfold than they’d like. Some are grumping that their favourite couples aren’t being showcased enough, several maintain that they dislike watching camp… and my opinion is still the unpopular one since I’m still enjoying the entertainment overall.

Darkness suits him.
Brady’s now what Susan refers to as one of those “mean, mean, mean vampires” of Salem. He’s back to jogging again and jogged right by his brother – bummer for Eric – and shot his mouth off again about Nicole. I’m still Team Brady on that front and I know I’m almost alone in those thoughts but like everyone else, I want to move on from the ugliness. Brady, however, is sinking into his pain, wearing it like a suit of armour. Eric Martsolf is rocking Brady’s pain. That said, Eric needs to start defending himself and lose that wounded bird look. Sure he made a huge mistake, but at some point, the abuse needs to end and only he can stop his brother from heaping it on.

It was a surprise that Victor dropped Brady as CEO of Titan, so he could spy on Eve. Last Deconstructing DOOL, I assumed Eve had more secrets and she did. She’s CEO of Basic Black. That’s not even as surprising as her working there. She has even less experience than Sonny in business. Still, with her owning the company, Victor was right that she’d be a better adversary to them than an enemy. If Brady’s going to be Victor 2.0 someday he’ll need as many as he can get. Plus, he’ll have to learn from the master to stop PUI (planning under the influence) because even Rafe and the SPD saw through him setting Eve up.

IMO the character of Brady needs a loooooooooonnnnnnnnnnnnnnggggggggg break from Salem .. the only time he was fun to watch was in the Kristen storyline #Days

“This is a police station and not a kissing booth.” – Rafe
Rafe is quickly becoming the biggest hypocrite in Salem. Sure he’s right. Public displays of affection at work should be limited but Eli and Gabi weren’t the only two smooching at Salem PD. Rafe and Hope constantly lock lips there. So unless he is going to stop it himself he should shut it and lose the protective brother vibe. Gabi’s an adult who can take care of herself…I mean it took her about three months to build her company, Gabi Chic, and make it such a vast empire that Countess Wilhelmina can see how potentially lucrative it could be and wants to buy her brand. Okay so it’s completely implausible, but she still doesn’t need big brother to treat her like she’s 12 anymore.

Riding Chad’s coat tails.
I’d prefer it if Abigail got a job away from her husband’s company so she could have her own identity apart from being a wife to a DiMera. That’s who Abigail used to be. But this week, she followed Chad around all week for no apparent reason and it made her look like the little woman when I want to see her as a bold businesswoman of her own merit. She’s not just Chad’s wife and shouldn’t be seen as such.

What is Abigail’s purpose in this conversation other than looking lost as all hell???? @SheKnowsDOOL

Drama queen.
Claire is the biggest drama queen since Samanther Brady. Theo’s idea to pay for social media followers was a surprise but could be a good business decision, one that could prove fruitful if the followers listen to her tunes and enjoy them…It hurt her ego, which is understandable and made me wince, but her looking to Tripp for comfort is a bit much, what with her throwing herself in his arms, constantly telling him how amazing he is. It looks like she’s into him and doesn’t know it yet. Good, because Theo can do better.

Secret comes out by a classic eavesdropper move.
It didn’t take much convincing for Kayla to reveal to Kate that Tripp was the anonymous donor at the hospital. Kate’s reaction was interesting. She was concerned that the hospital wouldn’t have wanted to accept mob money. They accepted money from Clyde Weston, and never returned it once he was convicted, so chances are they don’t give a crap. The money’s being put to good use but that’s neither here nor there because the best part of all this – or the worst, depending on how you watch your soap, is that Kate now has something juicy on Tripp.

DiMera sabotaged. OoOoo.
I’m having a hard time caring about this story. Worse, because my Theo got shot because of Kate’s stupidity and JJ’s craptastic cop skills. Okay, it was dark…But I agree with Abigail. Andre’s innocent. I think Vivian and Stefan are behind this.

Paul’s mistake cost him some fanbase.
Paul has been a good guy but boy, the guy made a humdinger of a mistake. For his first offense, it was surprising to see the hostility he took. Those who want Sonny back with Will called Paul every name in the book, outraged, while those who don’t want WilSon back together saw it as a big mistake but one worth redemption, especially considering he came clean about an hour after he hid the truth that Will is alive. I didn’t judge him either way. I cringed and enjoyed the ride for what it was – a mistake meant to provide a nice dramatic effect, prolong the big day when everyone finally sees Will alive, and create a reason for Paul and Sonny to break up. I’m still probably alone in my thinking that Paul and Will had more chemistry than WilSon or PaulSon…but my heart still ripped out watching PaulSon break up.

Oh Sonny gave back the ring. Over a 24 hr lie. You’d think Paul slept with another man & hid it for months. #days

This is my sometimes unpopular opinion – share your own in the comments. Popular or not!

We’re looking forward to attending #DayofDays tomorrow @CityWalkLA. @KristynBurtt @soapoperafan ?We’ll be on social media throughout the day trying to get those home a few pics, clips! #DAYS pic.twitter.com/iNXfs3iMjR

Kate to Jennifer, “What else did Deep Throat tell you?”

Victor to Eve, “That makes you a fortune hunter and a squatter, and an opportunistic carpet bagger.”

Eve, “I tell ya. Keeping those studs in line can really make a woman sweat.”

Sami to Roman and Marlena: “It is possible to come back from the dead. Look at the two of you. It’s practically in his blood.”