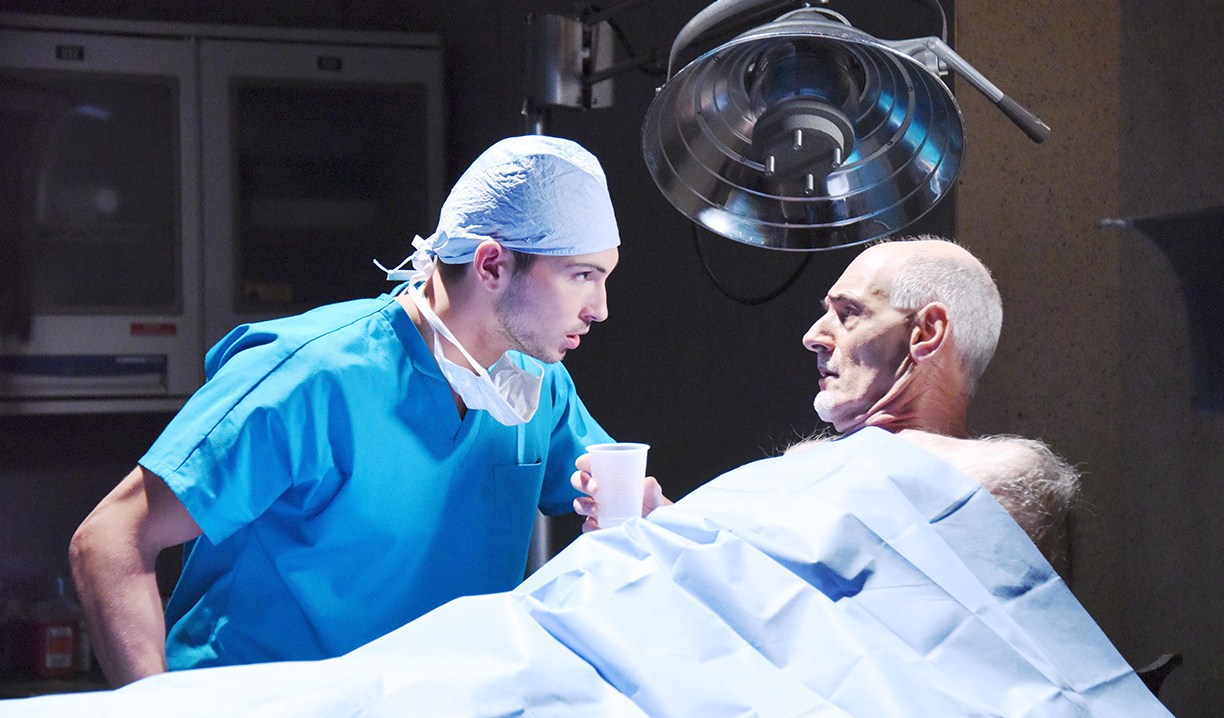 Whether viewers loved it or loathed it the macabre stand-alone Halloween episode got an extraordinary reaction from all viewers. Like any real-life nightmare, it had confusing elements, the scenes flipped around, there were gaping plot holes, and those of us who loved it were on the edge of our seats. It was like watching a horror film. Sure, it didn’t further any of the storylines but was worth watching for pure, unadulterated fun. The rest of the week fared well, with a few WTH moments…

A bombshell drops a bombshell.
Eve’s return was pretty explosive but is still missing a reason. I don’t think marrying Deimos is the only thing she’s hiding. How hilarious was it that her eerie moaning music was back along with her. We thought we’d heard the last of that…and we hope we’ve seen the last of that uncomely faux fur she wore.

DiMera sabotage.
Though I love me some Kate, I cannot stand how she’s treating my Theo! I’m afraid this sabotage storyline is going to land Theo in big, big trouble and she’ll be to blame.

Memphis Blues.
Sami, Marlena, John, Sonny and Paul, AKA, the cast of “Scooby Doo” broke into somebody’s house in order to find clues about claims that Will is alive. While I can empathize with the urgency of finding Will, and how poor Sami and everyone else is feeling, this scene would have worked better for me if at least one person even mildly attempted to stop the proceedings. It’d have gone a long way in balancing Sami’s impetuousness and to some – annoying nature. I would have liked to see John use his ISA skills to interview Elvis or Marlena use her psychiatry degree to put Elvis at ease. None of that happened which made zero sense. Because they didn’t devise a proper plan, their impulsiveness cost them. Sonny attacked Elvis and got karate chopped into unconsciousness, and Sami’s aggressiveness landed herself in jail. Yep. Sami hounding Lucas to do ‘what he did best’ and get drunk and make a scene so she could break out of jail was both cringe-worthy and funny. At least the second B&E was more fruitful when Susan Banks revealed herself, and told the tale (some of it a tall tale) about how she wanted to murder Will for revenge on Sami but that Ben beat her to it and Rolf couldn’t resurrect him because the ‘re-animator juice’ didn’t work. Diabolical but amazing. Of course, she’s lying about Will being alive since Lucas and Paul saw him in the flesh. The big concern now is that Will might not know who he is. Could Rolf have made him believe he’s EJ or something equally deranged?

Abigail’s most excellent nightmare.
Listening to Abigail and Chad on repeat with what sounded like filler dialogue about her eating candy corn and having nightmares but ‘not anymore since I married you, pookie-schnookums’ was painful, but luckily it was the start of an incredible Halloween ride, complete with a fog machine. Abigail was on edge because of Ben’s machinations and then she ate all of Thomas’ Halloween candy which gives her nightmares, and on top of it, she read Jane Eyre, which as we know, parallels some of the happenings on “Days” with the Ben Weston storyline. It all accumulated into an explosive nightmare she had with some Salemites being murdered by resurrected Necktie Killer and his victims. Kayla’s ghost was shocking, Both Paige and Serena were engaging and funny. In the last Deconstructing DOOL, I hoped Rolf was still alive even after he killed himself with cyanide and we got a reprieve for one episode while he dug up half of Salem and brought Princess Gina and that dreadful British accent back – by satellite no less. Holy campy! We had a nod to the killer lipstick storyline from April 2007 when Celeste gave Sami that drugged lipstick for Sami to use on EJ, and Serena’s wretched elephant statue somehow ended up on Chad’s bedside table when Abigail awoke! Good times.

Tripp’s naked, yadda yadda yadda.
What a lost opportunity. Tripp’s towel fell off in front of Claire and nothing happened. If Theo returned to the loft after remembering he forgot something, then got an eyeful ala “Three’s Company,” it could have been a lot of fun. Instead, they moved on with their lives. That’s not soapy!

Abandoned again by a fickle female.
I felt for Lucas. Either way, Adrienne dumping him after Bonnie discarding him as Adrienne was never going to be easy for both parties and although I like Adrienne well enough, the way she went about turning Lucas loose didn’t endear me to her. I do think she and Justin are a better match but found her rationale for reconciling with Justin to be eyebrow raising. She learned Justin still had feelings for her, which changed her feelings for him, and when he rescued her from prison, she was transported into a classic Disney storyline or romance novel heroine. Oh boy. One day Lucas might be happy he dodged that bullet.

Daddy issues on the way.
Gabi’s got to stop introducing her kid to the men she dates, or Arianna’s going to have abandonment issues.

She’s probably sick of her mom’s revolving door of men. Poor thing had 3 boyfriends of Gab play daddy to her. Not the mother of the year. ? — Elie (@MeElectra) November 1, 2017

This is my opinion – share your own in the comments!

Victor says, “Fine, she gets 24 hours of compassion. Then we throw her out on her ass.”

Paige to JJ, “You’ve been cheating on me again?”
Paige, “If it helps, you can call me Eve.”

Lucas, “Maybe I can get my Hallucination Will to hook me up with another bottle.”