As Days of Our Lives Builds to Two Big Show-Stopping Events, Xander’s Time May Just About Be Up! 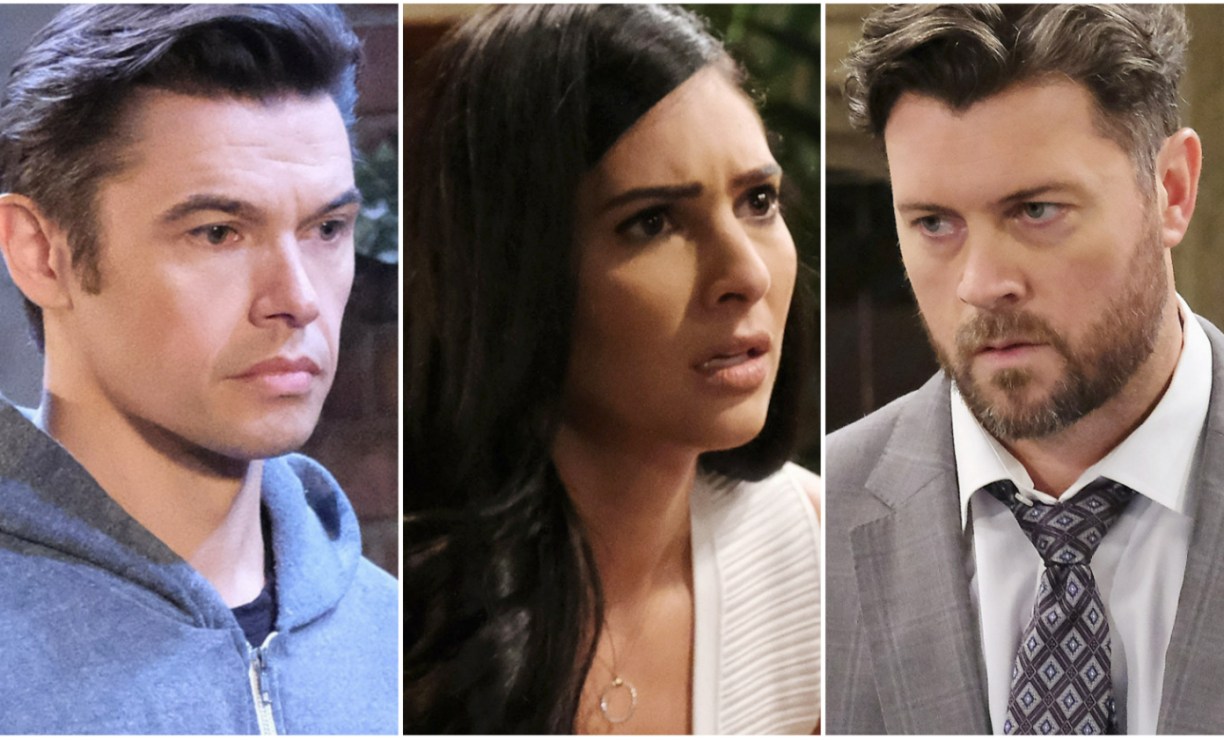 We seem to be back to holding patterns as we wait for the two big events coming up: Gabi and Li’s wedding and Susan’s funeral. But there were a few revelations this week, which kept the show from dragging completely! 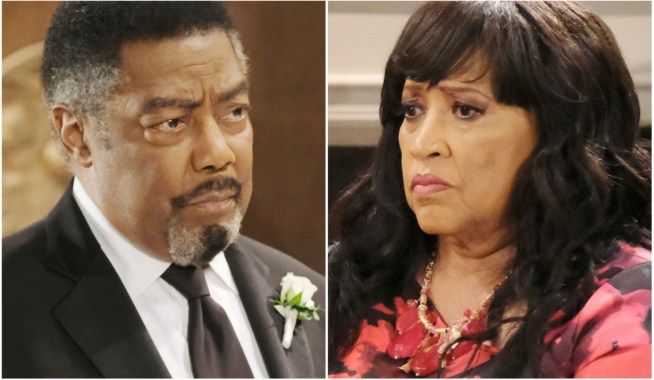 As Days of Our Lives’ Paulina Drops a Bombshell to Save Her Marriage, Jackée Harry Lets Fly Another That Could Destroy It!

Nicole and Eric are officially done, and I say… good riddance. I hope it sticks. I knew they would be in for trouble back when he first showed up, but I was not expecting them to explode so spectacularly. Their relationship has been ruined for me at this point. He’s just angry, flailing and vicious to everyone around him and Nicole… I sympathize with her a bit more, but then every time I start feeling too charitable, she goes and pretends she didn’t try pushing Jada to get an abortion. 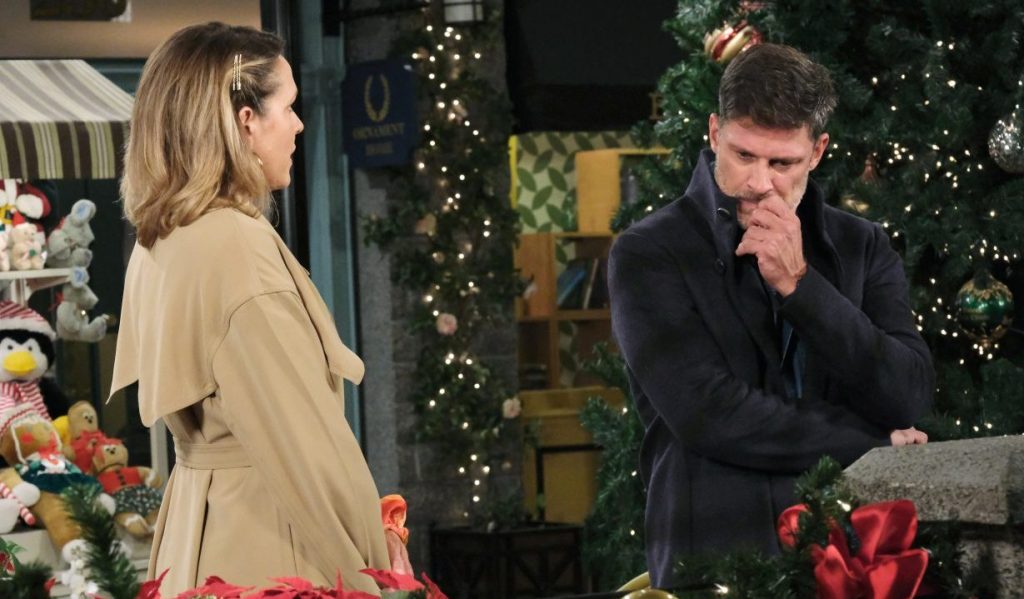 Eric’s five full minutes of silent thought when Nicole asked when they ever really work was a dead giveaway that these two need a fork stuck in them.

Whether it’s a decision Jada made of her own accord is beside the point. Nicole, as Jada said, *checks notes* “was not going to let anything stand in the way of her and Eric. Not me, not her marriage to you and definitely not my pregnancy.” So what’s next? Nicole and EJ? Eric and Sloan are definitely happening, though I’m a little disappointed the show made them bond so effectively over their loss. I mean, it’s great from a character perspective, helps make Sloan more human and less one-note and makes them make more sense together. But I was kind of hoping Eric would just turn into a cad and start hooking up with her for fun.

Aunt Sister Mary Moira Banks better not stay long. Other than the “Aunt Sister” part, she’s just irritating, mean and lacks basic human emotions. She’s a gimmick from the past that should have stayed there. Yes, her brief appearance on Beyond Salem was amusing, but again, it was mostly just as a quick joke. That’s all she should ever be. Some fans are already theorizing that she’s actually either Susan or Kristen in disguise. But Kristen can’t pull off an extended stay and Susan wouldn’t have been able to keep pretending once she saw her beloved Elvis Jr. 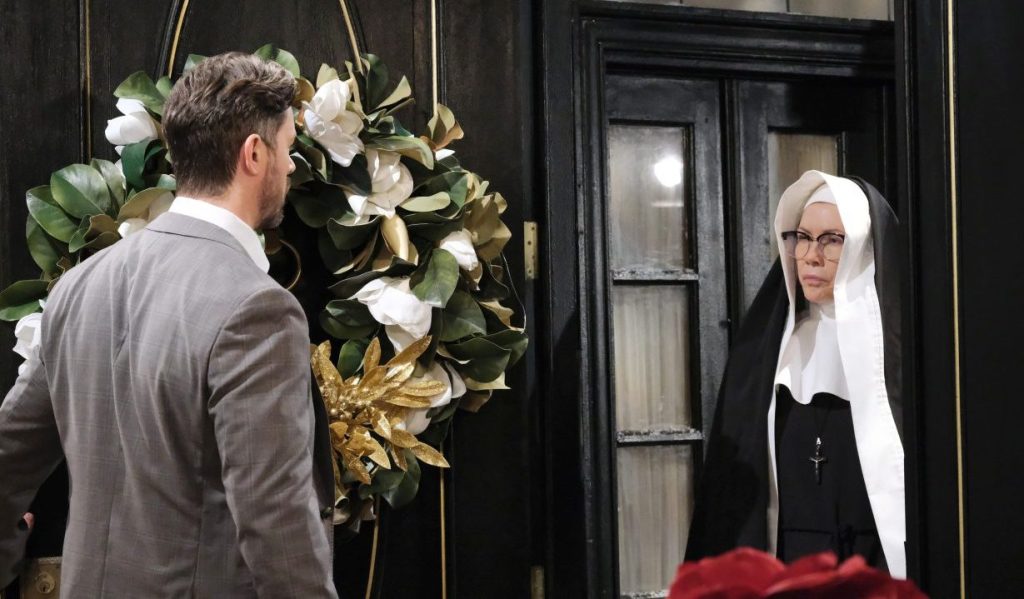 Lord, give me strength to survive this visit.

EJ can be an entitled jerk, but five minutes with his aunt and I keep waiting and hoping for him to blow up at her and throw her out. As Nicole said, right now, he’s being a borderline saint and I do like seeing those two bond in their grief. I suppose they’re going to be getting back together and I won’t hate it, but it also might be kind of nice to see them become just good friends. I know Nicole has Chloe and Brady, but EJ could use folks in his corner, especially with Ava definitely alive and on the loose. Susan’s funeral should be one heck of a ride — whenever we get to it.

Speaking of people with no friends… eek, Gabi. I love her and Wendy’s vibe, but I’m hoping it’ll survive what’s to come. At the very least, could we see her hanging with Sonny more? They’re co-parenting Ari, they’re friends and he could use someone besides Leo. Trouble with Will was inevitable if the show couldn’t bring them both back fulltime, but I hate that the trouble is Leo. Paul’s still out there. Shane’s son Andrew could come to town — Leo is not the only other gay man around. 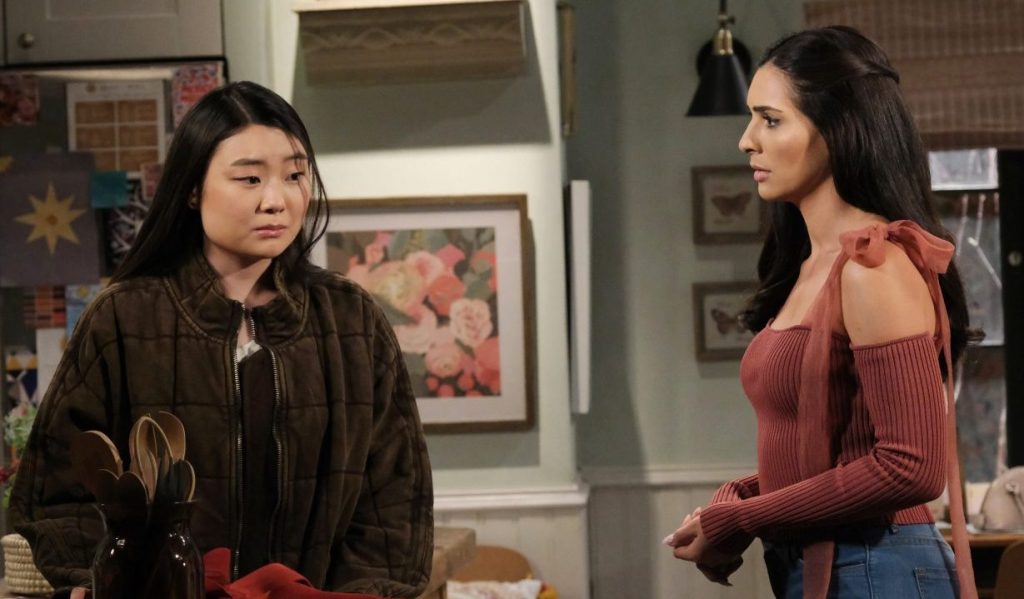 Realizing that Gabi has no real friends got them both depressed.

As for Wendy; I’ve never been in this situation before, but I feel like once you decide to keep a secret you just… keep it. This constant “Oh no, I almost blurted it out” she and Johnny keep going back and forth with is a little silly. They’ll either decide to do the right thing or not. And how many times are they going to ask each other if they’re sure they’re not going to say anything?

We’re just spinning our wheels here waiting for the wedding — which means we’ve got the better part of a month of this left. And while I’d like Wendy to give in and tell Gabi before the wedding, so the bride can start planning revenge for the big day, I have a feeling it’ll just go down as another wedding reveal.

Well, wegot our answer about how the show would deal with Paulina becoming governor. Her quitting is less dramatic than fighting to keep the position in the midst of a scandal, but now there’s no risk of them going anywhere. As for Abe staying mayor, though, I love him, but he should be ousted anyway for running for an office he knew he might be quitting on day one. Let’s give him a new job. Maybe he can team up with Paulina in business and add a third corporate pillar to Salem alongside Titan and DiMera. 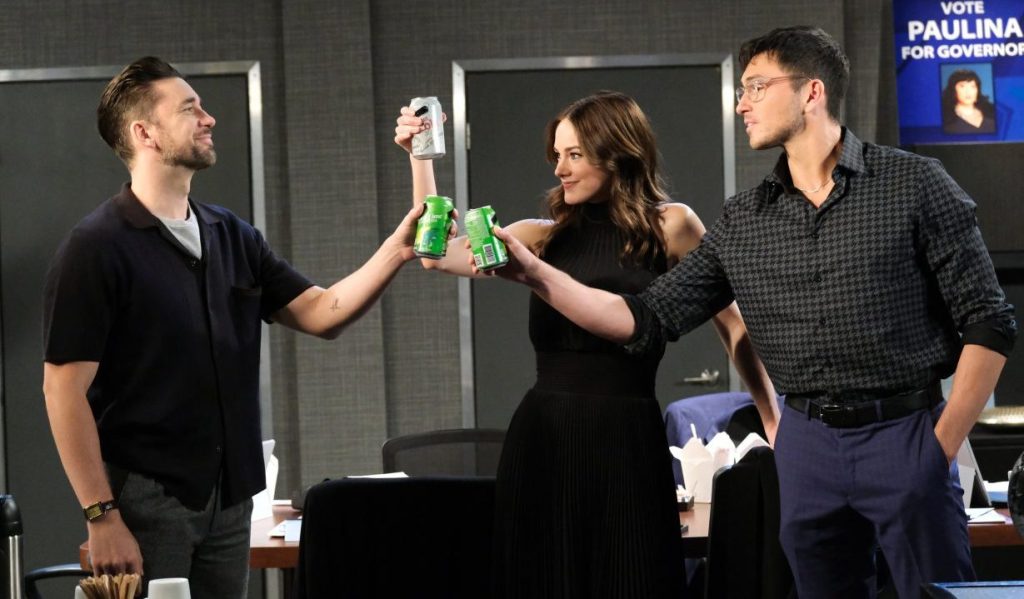 Clearly, Chad and Alex are both feeling a little green with envy. Or is that soda?

But she’s stepped down and inadvertently pulled Chad and Stephanie back together again. I think Alex is finally doing things right now, but I’m still having trouble getting behind him and Stephanie and buying just how into him she is now. I’m rooting for her and Chad, sorry “Chabby” fans. But I dunno how good Sonny’s advice was to essentially fight over her and force Stephanie to pick was. I mean, I guess, but that’s just setting everyone up for pain.

A World of Trouble

The show needs to stop with this fake “I know what’s really up” stuff. They did it with Stefan, with Gabi, with Justin and Xander. I know it’s a soap trope, but it’s practically being used every other day at this point. What I did appreciate, though, was actually showing that what happened to Bonnie was traumatic, though it’s a bit jarring compared to how silly she and Susan were during the kidnapping. But I suppose Susan’s death made Bonnie realize it wasn’t just some wacky telepathic game. 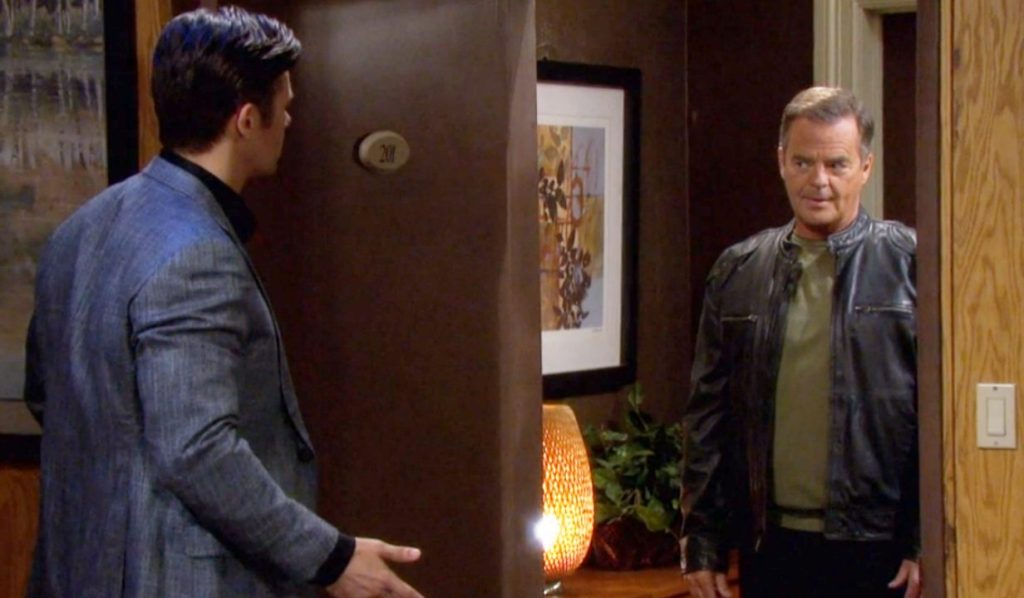 “Sloan doesn’t think I’ve won a case since she was in pre-school… I’ll show her. I’ll show everyone, Xander! Are you with me??”

But as annoying as the fake out with Justin was, his pushing to help Xander added a whole lot of delicious tension for me. Gwen’s online template contract is supposed to fool a business lawyer? Please. I don’t think Bonnie realizing Xander kidnapped her is going to be the only trouble he’s going to be facing. And once Sarah realizes how much she was duped… Sorry, Xander. That’s that.

Check out all the fun your daytime faves have behind-the-scenes with our new bloopers photo gallery from shows across the dial! 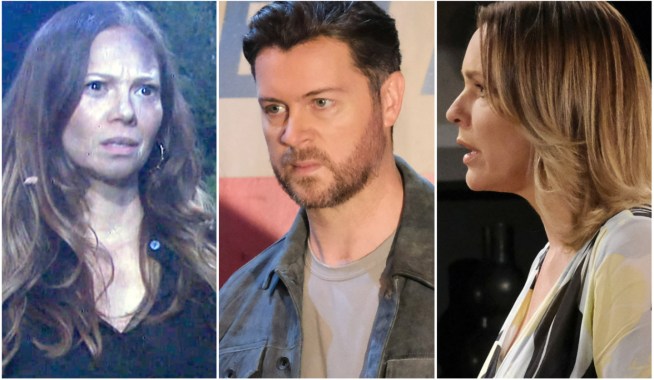 A Series of Fiery Days of Our Lives Confrontations Forced Us to Face Uncomfortable Truths — But Also Gave Us Hope for a Return!

Days of Our Lives Gave Us the Perfect Pairing We Never Saw Coming — Plus, the Two Characters We *Really* Hope that Bomb Took Out! 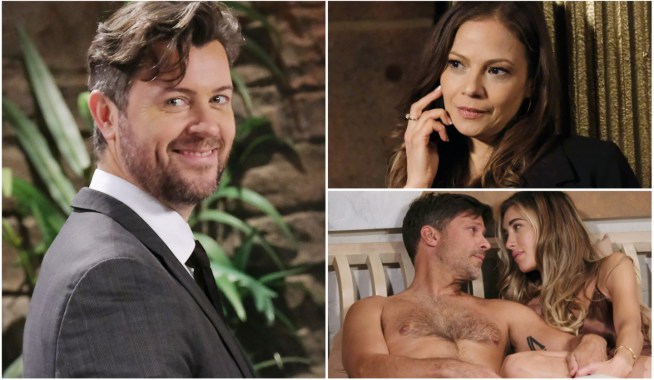