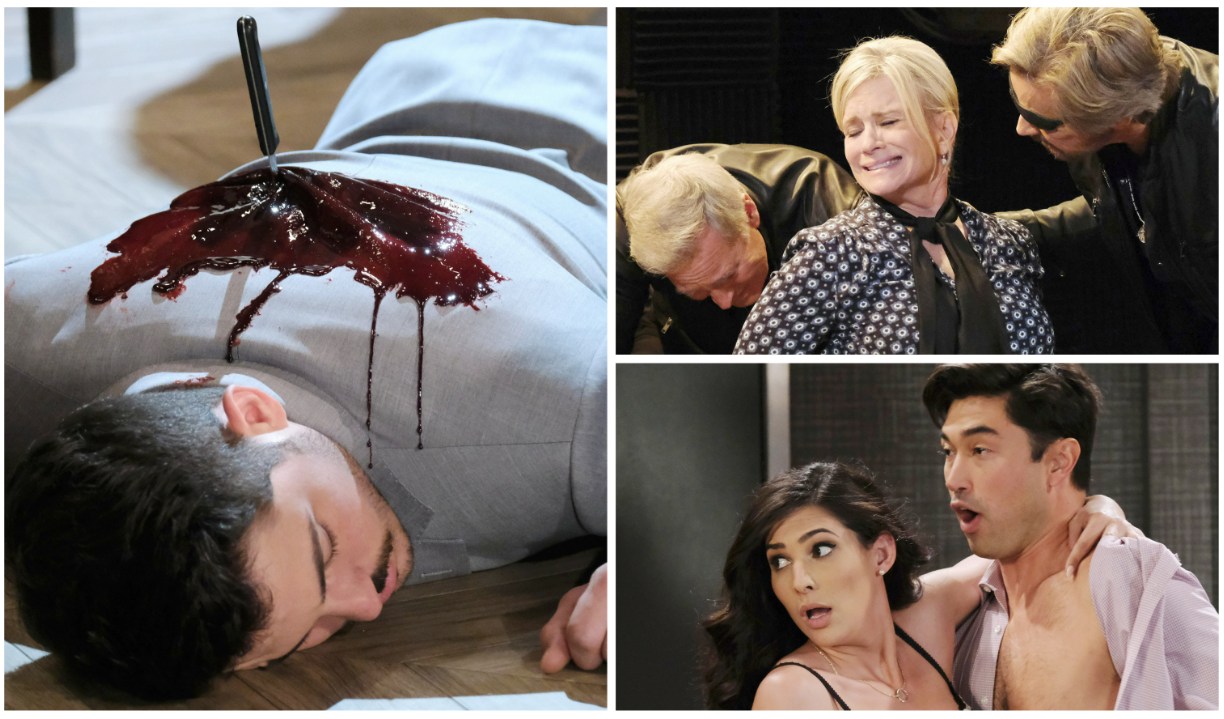 It looks like Abigail’s killer made their next deadly move, but it’s just left us with more questions than answers… and has us pondering if two of the show’s biggest plots right now may somehow be tied together! There were still a fair share of cringeworthy moments this week, but overall, things are looking bright as the show approaches the end of its NBC run.

Up until this week, both Gwen and Leo were believable in their protests of innocence, but we didn’t quite get confirmation. Now we have it. Gwen was in prison talking to Chad when Sonny was stabbed, and Leo had left him alive. (Yes, Leo, you are being framed. You’d think as a conman you’d have caught onto that a little sooner.) 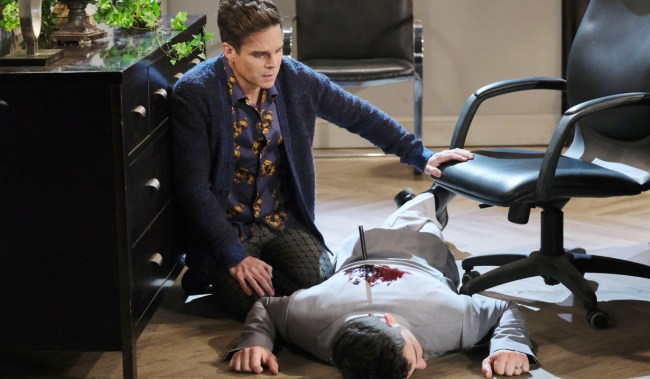 “Oh wow, I thought I was the only one stabbing people in the back around here! Sorrynotsorry, Gwen…”

I’m going to confess to be being baffled at this point. Is someone framing Leo because he’s so easily framed or because they have it out for him? If it’s the latter, there’s no end of people who could be doing it — but who would be willing to kill to take him down?

More: The shocking relationship that could save Chad

Has Nancy suddenly snapped? Who would have something to gain by removing both Abigail and Sonny besides Leo? Is it business related? Distract Chad from DiMera Enterprises and remove the head of Titan… Is Li playing an even more dangerous game we just haven’t figured out yet? His role in keeping Stefan alive was definitely a surprise out of left field.

Leo finding Sonny stabbed would have been a great Friday cliffhanger, and I was a little worried that the show had blown it again, but Sonny fighting for his life in the hospital works just as well. Leo pronouncing him dead was a bit of a heart jump moment, but fortunately that didn’t last long. Well, so far. Would they really kill him off?

Round and Round They Go

This round of DiMera drama has been far more entertaining than the half-baked board maneuvering that put Gabi in power to begin with. That look on Li’s face as he realized convincing people that Ava was hallucinating was about to backfire on him was priceless. 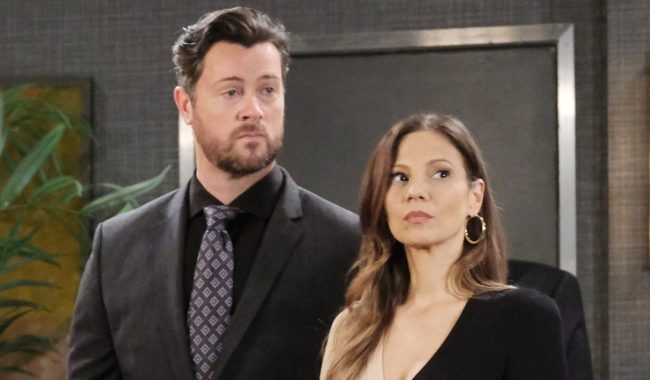 EJ and Ava’s rousing game of “Look Anywhere But At Each Other” ended up being a draw.

He seems so menacing and capable when working behind Gabi’s back and locking horns with Kristen, but then his dad shows up in town and the Ava debacle happens and it suddenly feels like he’s playing a game he doesn’t entirely understand. That’s something I feel many have found out the hard way when tangling with the DiMeras. I don’t see a bright future for him…

Also, I think EJ works best as ruthless businessman who isn’t even trying to do the right thing. Concerned about Ava’s wellbeing indeed… Now that he alienated Johnny, EJ’s just about out of options. He could win his son back over by playing nice, but if Johnny falls for Ava, he’s still likely to continue backing her. EJ’s only chance now may be to try to seduce her and win her (and her shares) over himself. That should be a wild ride.

Plus, Stefan’s imminent return should spice things up even more. I’m hoping that if Dr. Rolf is “erasing” his memories (however that’s happening with his little remote), they won’t end up taking the easy road back and, after a period of loathing Gabi, suddenly remember everything again.

They already played a version of that with Xander and Sarah and, well, look how that’s turned out. Where’d they go again? Maybe it’s time to trot them out to re-solve Abigail’s murder since they got it wrong the first time. Or, you know, just to let us see that they’re still around.

Seeing Alex stand up to Leo for Sonny’s sake was nice to see. Leo is, objectively, even more of a predator than Alexander, but Sonny’s brother is still treading on dangerous ground. 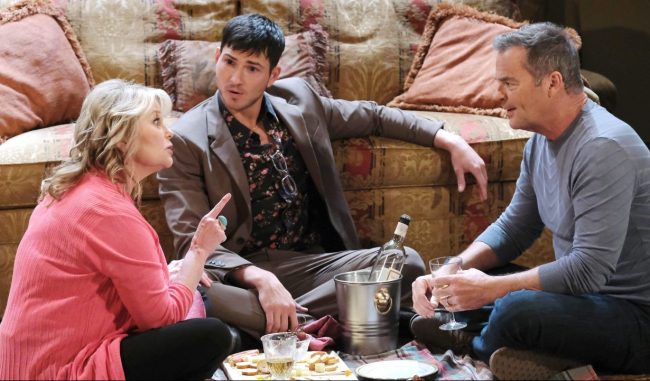 Even Alex was surprised to hear someone defend his behavior…

Stephanie made clear that Alex wasn’t “a predator, or anything like that,” but he kind of is flirting with it. No means no. There’s a difference between being persistent and harassing someone until they give in. Sonny playing dad to Alex hasn’t been my favorite thing, but I did appreciate him recalling how when Will wasn’t interested (for completely different reasons), he backed off and gave him the space he needed. Sonny won Will over by being a decent person, not by pressuring him into something he made clear he didn’t want.

And Bonnie, I know you have a “colorful” history yourself, but please don’t encourage your stepson.

OK, great, so Orpheus has more planned than kidnapping the ladies and holding them hostage with a bomb. It still went down as usual. Damsels in distress working through their issues (with that said, I didn’t hate Kate, Marlena and Kayla’s prickly interactions) and being rescued by their men folk. 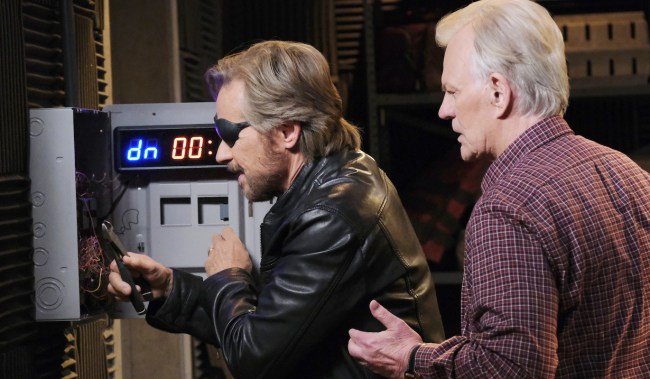 “For the love of God, man, hurry up before this whole story bombs!”

It was kind of nice, though, to see the old gang banding together and take a trip down memory lane with just how long Orpheus has been making them miserable. But the whole thing was underwhelming. I get that the bomb wasn’t Orpheus endgame, just a diversion. But it seems silly to blow his pardon so soon on something that as John said (or was it Steve?) he treated as an escape room.

• Chloe’s reaction to Nicole’s obsession sums everything up perfectly: “I’m a little embarrassed just hearing about it.” Same. 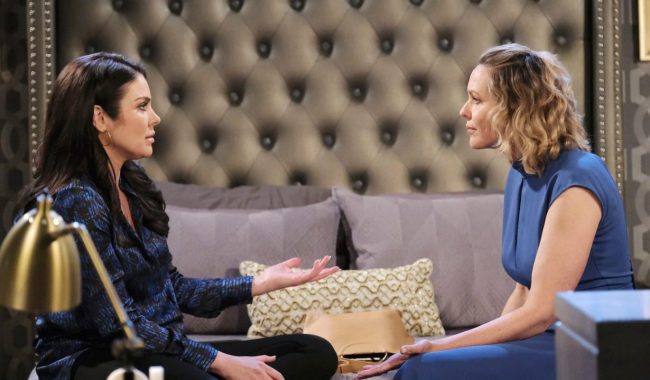 “Look, all I’m saying is that every time you open your mouth, I’m more and more embarrassed for you.”

• Eric and Rafe’s Nicole obliviousness is almost eye-rolling at this point. Some characters are just too good for their own, well, good.

• I enjoy Jada guffawing as she’s brought up to speed on how bizarre life in Salem is, but even I got lost with Rafe trying to explain that chain of marriages.

• Leo really went through some mental gymnastics to get to “I need to call an ambulance.” I guess his mind isn’t quite as nimble when it comes to doing the right thing.

• I wish Tony had a bit more to do — his business experience should dwarf even EJ’s — but I chuckled at his running commentary as the tables kept turning in the board meeting.

• Now that Belle and Shawn are off to shower together once more, does anyone else smell a Jan return in three… two… one…

Check out our photo gallery of some of the hottest couples ever teased in daytime… only to be dropped before they got together! 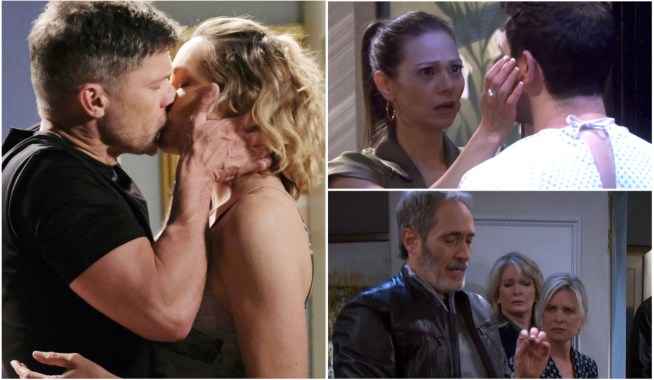 From Stefan's First Contact to Orpheus' Big Move, Find Out What's Working and What's Not Before Days of Our Lives Moves to Peacock

Days of Our Lives' Final Week On NBC Leaves Us With Cliffhangers and Mysteries Galore — Not to Mention a Steamy New Relationship! 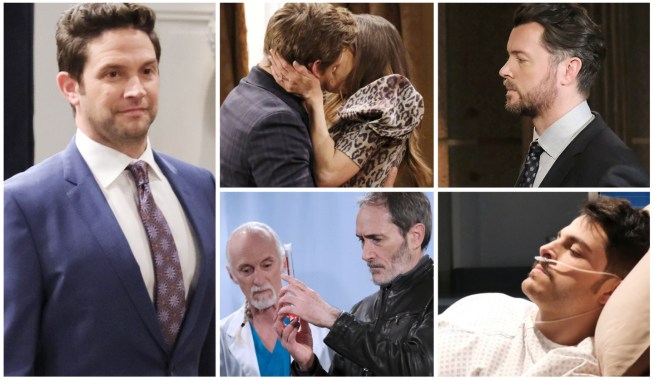