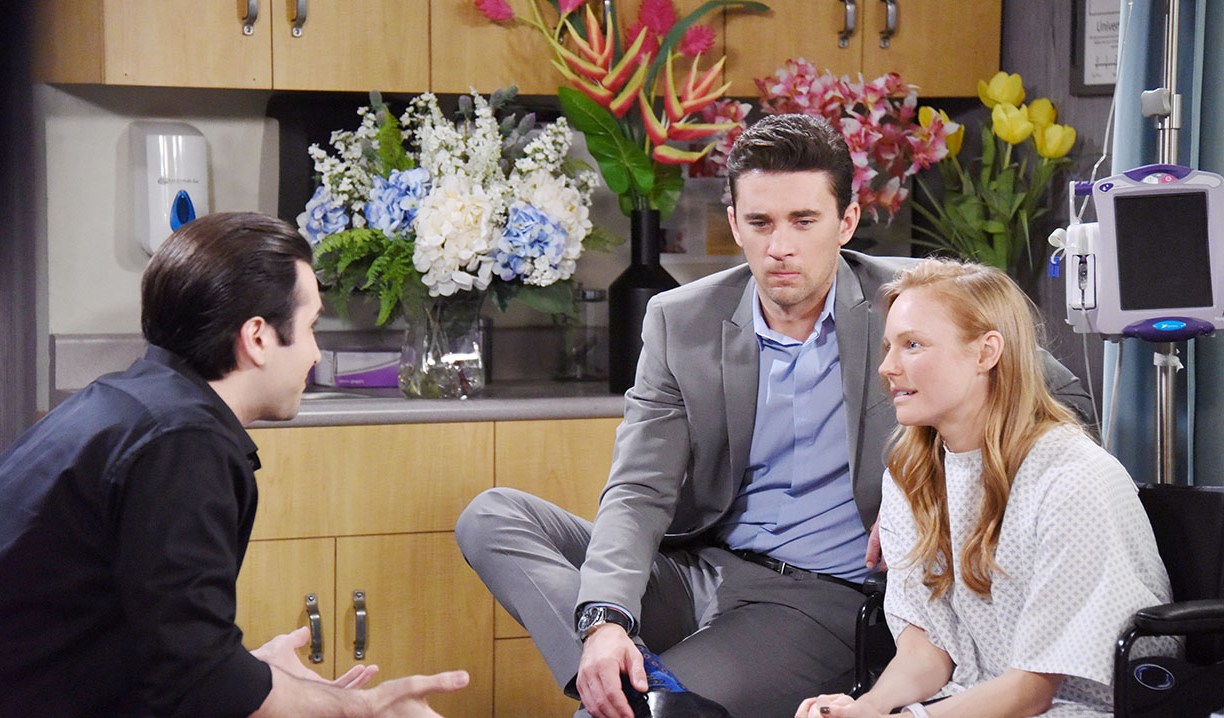 Ron Carlivati seems to know what so many “Days” fans want in terms of the surprises, twists, mystery and adventure. Sure, many have still not warmed up to the idea of the doppelgangers, though you can’t deny they bring comedy relief, and yeah, another fake backstory crept up once again like a putrid stench wafting in the air, but the Brandon Walker mention, the humour, and the excitement of seeing Nicole get her baby back made up for it in an otherwise solid week.

Scooby Doo cops.
It was pretty funny to see Hope and Rafe in the interrogation room with Abe talking about sticking it to Raines, yet having no concern that their criminal commissioner might have bugged SPD or at least the interrogation room like Aiden did once upon a time. Lani and JJ did the same thing a few days later. It may be lucky for them that Raines (so far?) hasn’t bugged the room. It’s a shame Rafe didn’t tail Raines on Friday because it looks like Gabi’s in a big predicament now that she knows Raines is Dario’s silent partner. But when Aaron D Spears leaves Days, will we be able to keep Myron?

Loose cannon?
The Honey Badger reared its head in JJ’s mind once again this week when he defied Raines’ orders by not staying out of the counterfeiting case. It turned out fine. While Lani (and I) didn’t catch on when Raines was grilling her for information on the case from her FBI sources, JJ showed good instincts and quickly surmised that Raines was Dario’s silent partner. JJ’s tactic with Raines was also adept when he pretended that he didn’t fully trust Abe since he was married into the DiMera family.

He pulled out all the stops – for someone else’s kid.
Some of us may or may not have raged on Brady for interrupting Judge “I’m always open to take bribes” Thorpe when he was recounting how Nicole defied the court order to stay away from Holly by holding her kid at the town square. Then by the end of that episode, all was calm as Brady saved Nicole from living a life without her baby when he threw Deimos’ bribe in Thorpe’s face. It was epic. Brady was a superhero. Of course, one good deed doesn’t dismiss the fact that Brady forgets his own kid’s name. Couldn’t Anne return and entertain us by rubbing it in?

Surely somebody will miss her?
With all of the twists and turns Ron C writes for us, mentioned in Deconstructing DOOL last week, we can’t help but wonder if somebody will miss Anjelica. Hattie is right, nobody liked her but we can’t discount that phone call a few weeks ago when she was discussing ‘him doing homework’. That person might miss her. Anjelica’s secret partner might miss her. I’ve been thinking that partner could be Kristen since John and Marlena are involved. Unless Anjelica instigated this mess on her own. It’s been fun to watch both Hattie and Bonnie screw up their look-alikes and watching those they interact with become more perplexed each time they open their mouths, but Andre had better look out because if Hattie gets her way, he’ll be off to Bayview in a heartbeat.

Will she or won’t she?
Abigail and Chad married once, in a lovely ceremony at the DiMera mansion. Then, during her plight with PTSD, she abandoned him and her child. When she returned, she wasn’t just an entirely different actress but she was and remains an entirely different person. Still, they were patched up, put back together and then her insecurities forced her to abandon him at their vow renewal. Her claims were that he belonged with Gabi due to that horrid made up backstory, which was a shame considering they actually do have a backstory – a nasty one! Then when they were drugged with Halo 2.0 they had a makeshift vow renewal yet each gave up on the other and moved on. So with all of that contention behind them – or against them – why do we need to rush this latest wedding and why does this couple need to marry in a church? Can’t we get used to Abigail as a person and then them as a couple and decide if we even like them before forcing them down the proverbial aisle?

Forced backstory full of holes, double wedding full of BS.
First of all, in the United States, it does not appear as though the Catholic church will allow same sex marriage but they’re opposed to homosexuality altogether. That bears the question, why would two gay men want to marry there? The double wedding is too forced and the entire scene in Abigail’s hospital room was alien to watch. Since we haven’t even seen Abigail in a scene with Paul since Kate Mansi played her, it gave us a start to see them conversing suddenly. I had to ask around to see if they knew each other, it’d been so long. And while Abigail probably went to St. Luke’s as a child, Sonny must have had an aneurism because somehow, he recalled loads of times that never happened when the foursome went to St. Luke’s together. He forgot he lived in Dubai. Meanwhile, Chad wasn’t even a part of their lives until high school, and we have no idea what religion he is or if he even is religious, while lastly, Paul grew up in California. Regina George says, “Stop trying to make fetch happen. It’s not going to happen.”

Billie’s return.
We learned that Lisa Rinna is bringing Billie back to Days. I’ve enjoyed Billie in the past and am looking forward to more of the Roberts’ family returning.

This is just an opinion – go ahead and share your own in the comments!

Mad-Hattie, “I’m not a doctor. I just play one in Salem.”