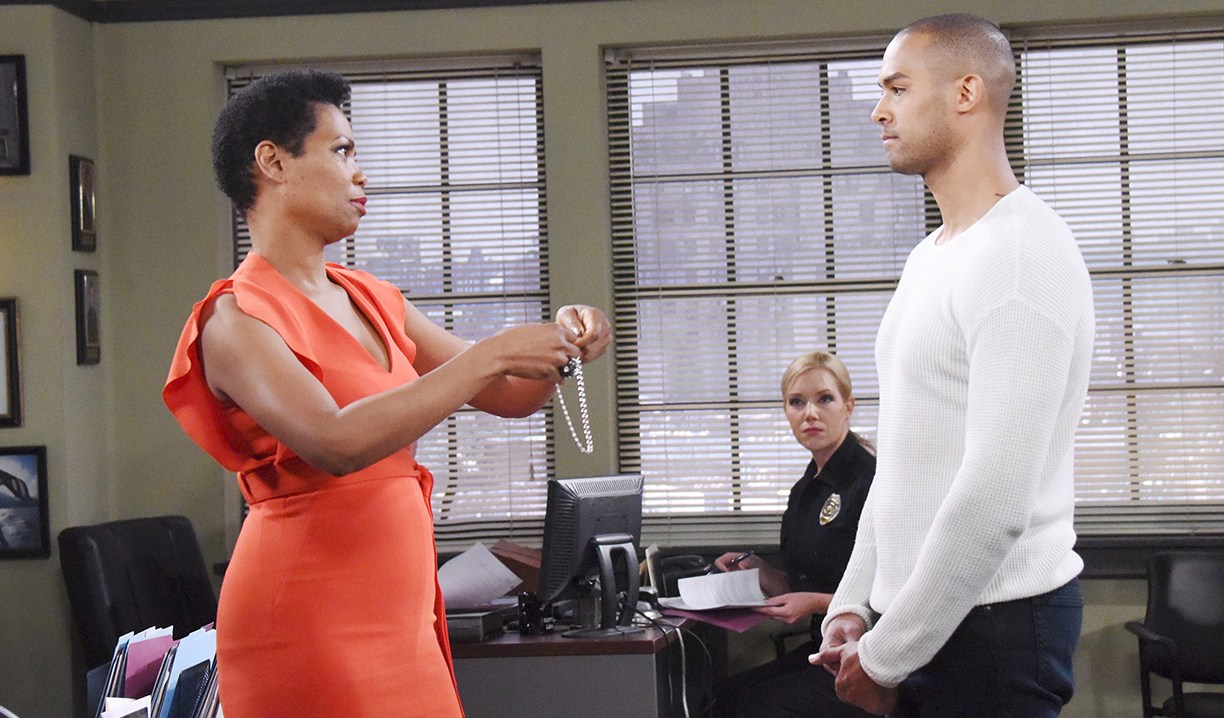 The week started off slowly with things quickly heating up with Abe’s arrest, Joey acting on his decision to turn himself in, and the fallout from Lucas and Brady’s binge. The result was a great deal of drama we can invest in. We also experienced viewer solidarity which was a bright point. Every “Days” fan appears to be outraged at the thought that SPD would believe Honest Abe is anything but law-abiding. It’s so much more fun than defending why we like one character over another…

Mixed feelings.
Now that there’s been time for last Friday’s episode sink in, we can discuss how shocking and heartbreaking it was to see Brady and Lucas quickly turn to alcohol during tough times. Since things seemed to be going so well for Lucas, it didn’t really make sense that he’d cave so quickly. As for Brady, he’s been weakened by fighting feelings of desperation and jealousy for weeks so it was easier to see coming. Sadly. Still, since I tend to compartmentalize, I found watching them drunk exceedingly amusing, especially Monday with Lucas yelling, “Adrienne,” as Chloe lead him out of the bar! What a treat to see the guys in a scene together, and to be reminded of Chloe’s past with them.

She cares about people other than herself!
Claire has grown so much this summer that I find myself interested in future developments in her storyline both with or without Theo.

Abe’s arrest was shocking, but chock full of delicious drama.
It has been intriguing watching Abe’s new story begin. I love how we get to look back and see how Abe was spending money more than usual and how it all came together in the one episode where Eli was about to tell Hope and Rafe who it the silent partner was and the camera switched to Abe and his wad of cash. It looked guilty but we know Abe’s innocent. Seeing Val removing her earrings and necklace and throwing them on the floor while glaring at her son kept me glued to my screen, then Abe seething and swearing to sue everyone at SPD for slander – titillating. This was the highlight of the week. But…I smell a set up. For one, he’s Abe. He’s an ex-cop who might have been able to spot counterfeit money, he’d never spend the cash all over town, and risk getting caught, and he’d never intentionally run over Abigail – or anyone else. It looks like Raines is our guy.

Psycho vs. a saint
It was an interesting twist to have Tripp forgive Joey for killing Ava. Tripp seems to think they’re even now since he threatened Joey’s mother’s life and Joey killed his mother. Uh ok? It’s not even but we won’t tell Tripp that. From this melancholiac storyline, we saw growth from both sons, especially Joey, who made us proud by doing the right thing and turning himself in, and all that drama between Kayla and Steve. I can’t wait to see how it’ll play out.

Tripp saying there’s no difference between his crime and Kayla’s is not true. Only one of the victims has a laundry list of felonies. #days

New information in Deimo’s case.
I realized this week that I truly no longer care who killed Deimos and I just want all vestiges of the past writing regime gone so we can move on.

Hattie and Bonnie.
A little of these two in the same scenes together goes a long way… On her own, Hattie’s unprepared and unpredictable. Bonnie actually feels guilty about Lucas, not that it’s going to stop her from taking him to bed. It’s no wonder Anjelica pulls her hair out just talking to these two! And that’s saying something since Anjelica is messed up too. It’s amazing how not one of the threesome have a conscience about what has happened to Adrienne and Marlena and how they’re hurting people like Lucas, John, and Brady to get what they want. I’d love to see at least one of them feel a bit of culpability.

Friday notes:
We were treated to more of Abigail and Andre’s friendship which was a highlight. Chad was released and asked Abby to marry him immediately, not wanting to waste more precious time. Neither does Sonny, who upon his own release, immediately asked Paul… something. Of course we’ll pick that question up next week but we know where it’s headed. Julie and Andre’s sparring was hilarious and Hattie getting shot down by Roman for that kiss and then Roman getting slugged by John was – amazing. What a crazy Friday. Last but not least, what about the kiss between Roman and Kate? Just how does Andre really feel about that?

That’s just my opinion – please share yours in the comments!

The psych ward orderly to Marlena, “Now, Hattie, you’re gonna find out what happens to bad girls.”
Victor to Brady, “Did you even think of your son while you were banging back the booze?”

Abe to Theo: “You broke the law. For nothing.”