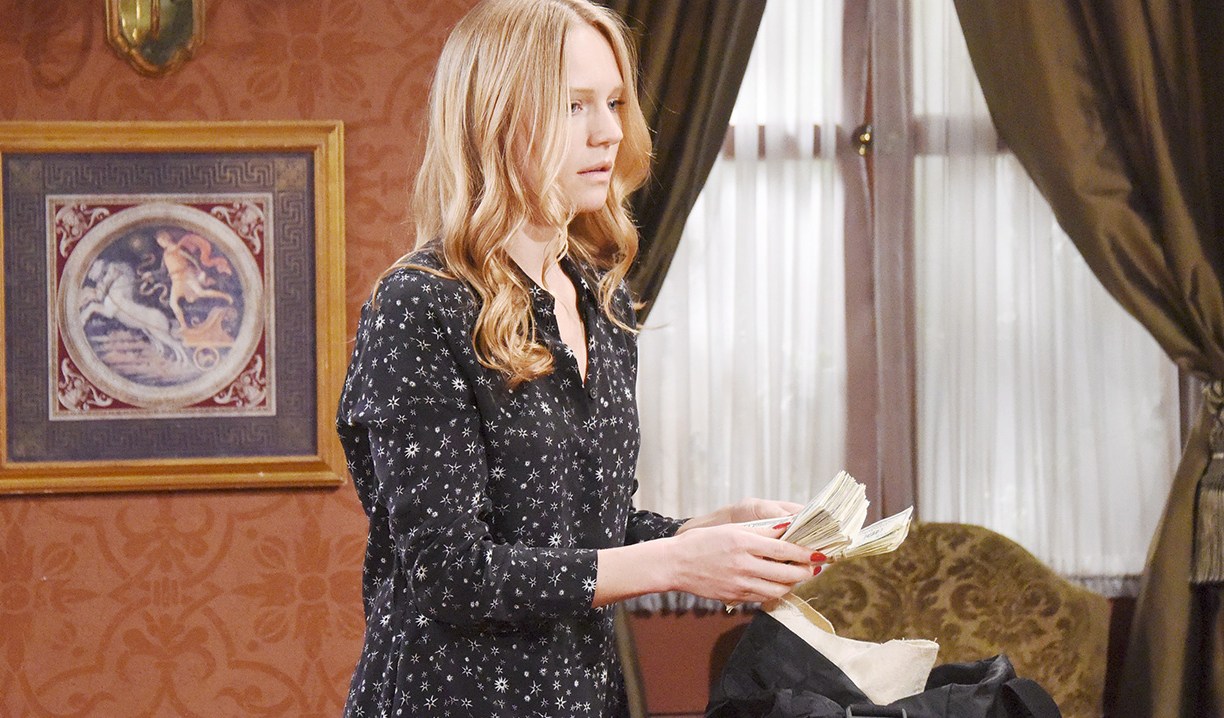 A few items on our wishlist for ‘how to make “Days” great again’ (hehe) have been checked off even before Ron C’s writing begins. We were treated to laughter between the closeness of friends, which has been sorely missed, making it the highlight of the week, and the fun evened out with a little drama thanks to Sonny, Tripp, Ericole, and that awful Nurse Shelly. Now, all we need are these stories infused with a bit of romance…

Good times!
Last week in Deconstructing DOOL we talked about humour returning to the show with Andre and Kate’s wedding. This week we were entertained by Val, Marlena, Kate and Kayla’s night out even more. Friends in soaps are far and few between, which makes us appreciate it more. The conversation was fun and light and Marlena’s response of ‘I think you’ve lost your marbles’ to Kate after hearing she married Andre was priceless, coming from the town psychiatrist. Give us more!

Adrienne’s a mature woman.
This protective vibe from Lucas and Justin over Adrienne during her cancer treatment was sweet but now that she’s feeling much better, some viewers feel that the boundaries are being blurred.

Anne running The Spectator.
Yeah that happened. Jenn Jenn’s back to her old habits of working whenever she feels like it while Adrienne’s still convalescing. It may be easier to root for Anjelica to take the newspaper away from them permanently…

Good ole Salem Police Department strikes again.
It’s annoying that Lt Raines, Justin Kiriakis and DA Melinda Trask are the only people a part of Salem’s law enforcers that have a brain and the propensity to abide by the law. Or maybe I’m looking at this the wrong way. Let me rephrase: It’s great that Salem’s finest have at least two brainy law enforcers. The others are no prize. JJ has been acting like the honey badger. Raines put him on paid leave and said to stay away from Deimos’ murder case. But JJ doesn’t give a shit. He just does what he wants. So do his pals, the Dumpster Divers who lead by example. Those two set Twitter on fire with humorous memes and rants from viewers with captions relating the coupling to garbage. Ouch! Sonny’s always been an upstanding member of Salem society, so it was no surprise that he approached SPD with his new memory. After that reveal, he appeared more like our old Sonny, not a gangster.

Regarding the murder itself, so far, our killer left a phone charger and a girlie magazine called “Big Busty Bras” behind at Salem Inn. That’s rather sloppy, which is interesting. It could be a red herring.

One beef: We didn’t get to see Maggie and Victor’s happy dance now that Deimos is dead?

It’s good to know Xander and I have the same taste in women! ????

There’s no substance…
While it’d really be nice to sing this couple’s praises, the writing is not there for Rafe and Hope, making this a rather forced couple. While I can find good in just about anything I’m tired of forcing it. We don’t even know who Rafe is anymore and Hope hasn’t been herself for years. Rafe has always loved and wanted kids but they haven’t had that talk, nor have they discussed where they’ll live once they marry. We only see them working together or bathing together, but viewers need more than that to invest. Even the other characters are grasping at straws to try to prop them. How embarrassing was it to have Julie tell Hope that Rafe’s good with her kids, as if Shawn and Ciara are toddlers? The biggest cringe-worthy moment was watching Hope show off her engagement ring. It was effing pedestrian having her act like a schoolgirl at show-and-tell and not befitting of Hope ‘my middle name is class’ Brady. No matter how much beer her suitor sucks back, she’ll always be a champagne kinda gal. Many viewers find it distasteful that she’s marrying both her neices’ leftovers as if she’s Brooke from “Bold and the Beautiful.” Some find the 7-year age gap too much. I don’t mind any of that but feel the need to voice those thoughts. Maybe, if Ron C keeps the couple together, he’ll show us more about who they are as a couple instead of having them doing things a 20-year-old would do like ‘Netflix and Chill’ or picnicking on the busy sidewalk in the park. Or…maybe he’ll tear them apart.

The creeper’s a creepin’.
It’s painful watching Dario take advantage of Abigail. Watching her reaction to that attempt at a kiss was priceless. The story’s getting creepier and Dario’s reminding me of Ben the Necktie Killer, but thankfully Abigail’s got a bit of “Nancy Drew” in her and has learned a few secrets which could turn this story around in more than one way.

Ungrateful little…
Seeing how much pain poor sweet Kayla is in due to Tripp messing with her career is excruciating. I’m torn between liking Tripp and wanting to bash him in the neck with a fire extinguisher! Yikes. It shouldn’t take long for Steve to learn that the rotten apple doesn’t fall far from Ava’s crazy tree but in the meantime it’s fun to hate on Nurse Shelly who has a big stick up her arse over Kayla.

I just used this for Jade. Feel free to use for Tripp pic.twitter.com/mwJLa9tTP0

Gabs would look smokin’ hot wearing a dirty burlap sack, but…
Why does Gabi suddenly have a penchant for baring her midriff ala 1990s? And since we’re talking 90s, Chandler Bing wants to know…could the dresses be any tighter? If she dressed with class, she’d attract an elite clientele with bigger pocket books. Like Anjelica Deveraux, who clearly needs wardrobe help and has money to burn, the beastly hag.

This is my opinion – please share yours in the comments!