Abigail Finally Busted Gwen, But Was It Enough? Plus, Ben and Ciara Are Officially Having Satan’s Baby! 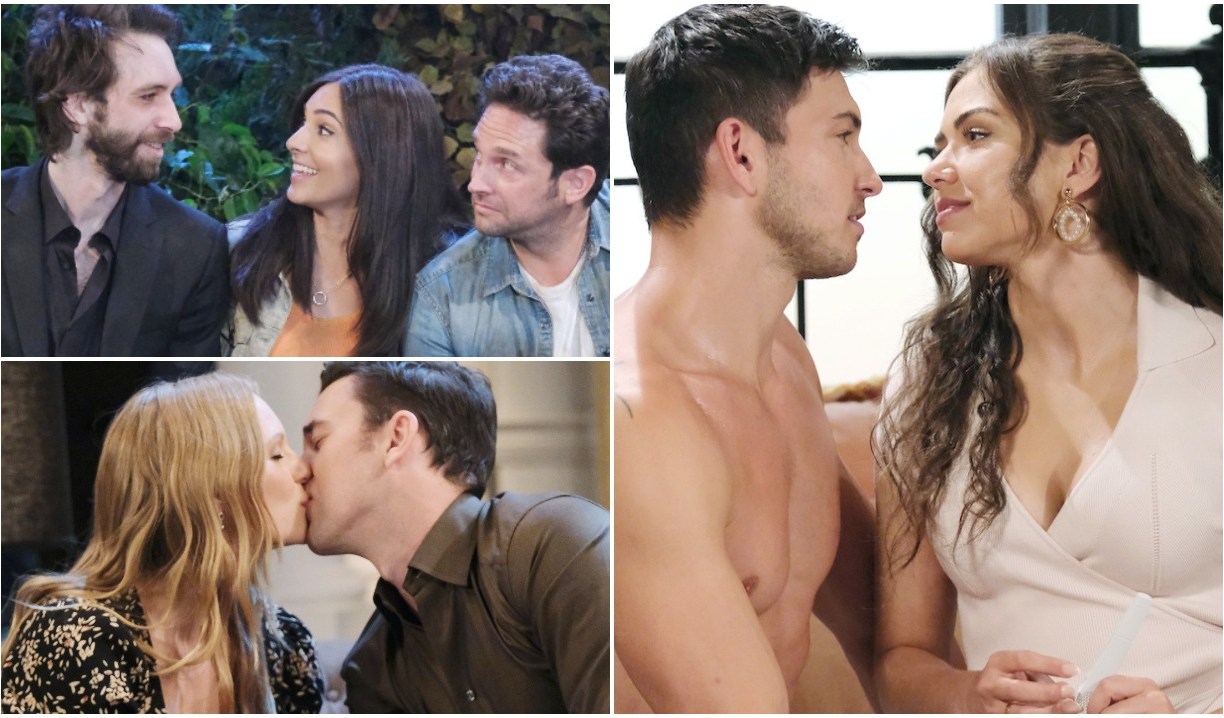 It was definitely a strange week in Salem thanks to MarDevil raising a trio of vengeance-seeking zombies. But even odder was the response they elicited from their victims… and how quickly everything went back to normal a day later. Elsewhere, Abigail finally busted her sis, while Ben and Ciara got confirmation of their baby… so what happens next?

Calling All the Monsters

I’ve been a horror fan for as long as I can remember, and of course, I’m a huge soap lover. So why is the whole MarDevil plot falling so flat for me? In a way, I suspect it’s for the same reason that I’ve never really loved the movie The Exorcist. In both that film and the currently unfolding story, a demon takes possession of a single person and proceeds to create what I’d call low-level chaos. 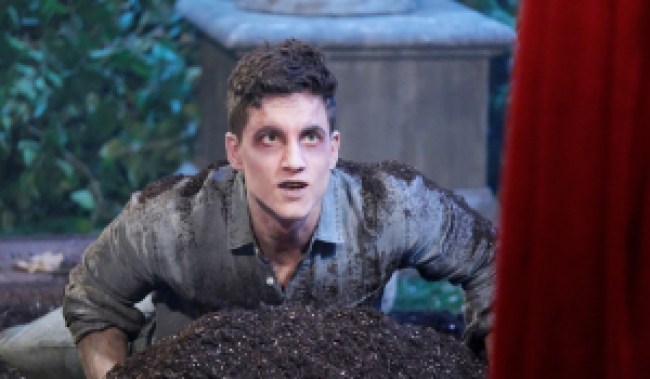 I guess I feel like if I had the power to raise the dead, I’d unleash an entire cemetery on the world as opposed to three people. But obviously, this is a soap, so things need to be done on a more intimate (and cost-effective) level.

That said, Days did a pretty good job of creating horror within the necessary boundaries of soap opera. Each of those resurrected came with an agenda, leading to two days filled with bizarre scenes in which typical soap scenarios played out as the dead confronted the living. “You’re such a loser,” Tripp told his undead brother, Charlie. “You were a loser when you were alive, and now you’re just a loser as a zombie… you’re not even scary!”

Dead and Lovin’ It

One of my favorite things on this planet is to watch Deidre Hall really let loose and have fun. Under normal circumstances, Marlena can be a bit uptight so when her portrayer gets to play Hattie or MarDevil, it’s what my grandma would have called a hoot. When MarDevil pulled Nick into a kiss, it was shocking… in the best possible way. The writers even let her visit the graves of Tom and Alice, toying with the idea of bringing them back to life before saying they could “both keep pushing up daisies for eternity.” 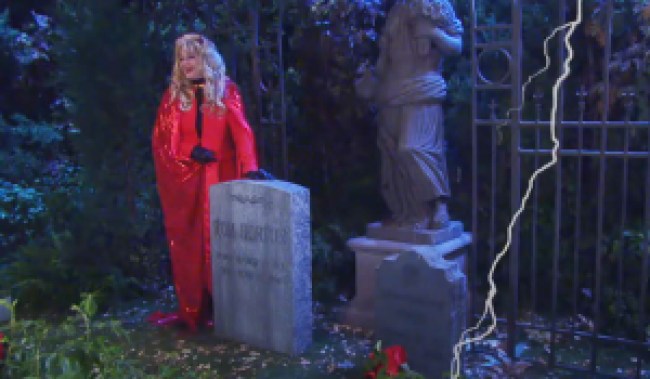 Above: It turns out the devil doesn’t wear Prada, she wears Spirit Halloween Shop.

My vote for quote of the week has to go to this exchange:

Another highlight of this week was Abigail finally discovering — and revealing — the truth about Gwen’s miscarriage. This is something we’ve been waiting for a long, long time and the scenes definitely delivered the payoff fans deserved. Gwen tried her darndest to spin things — even threatening to have Abigail arrested for pilfering her medical files — but to no avail. And how fantastic was it that Xander, completely unaware that his girlfriend’s secret was at that very moment coming out, gave in to Trask’s blackmail in order to keep it under wraps? 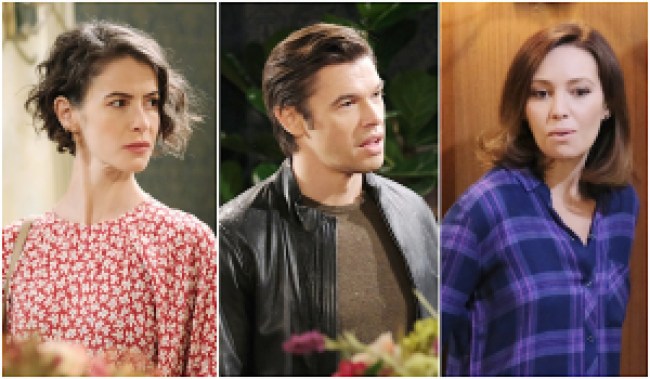 I’m not really sure where Gwen goes from here. It’s not as if she showed any signs of remorse for what she’d done to Abigail (although she did hate having hurt dad Jack), and I’m not sure the audience is really digging her with Xander, especially since most really want to see him reunite with MIA Sarah. I fully admit that I’ve loved Gwen from the beginning, but I’m a sucker for a schemer who is largely motivated by a deep seated belief that they deserve a better lot in life than they got. From Delia on Ryan’s Hope to Ava on Loving, I’m always rooting for the bad girl. And yes, that includes ones that many fans despise, such as Gwen or General Hospital‘s Nelle.

Ben and Ciara got confirmation of their impending parenthood on Friday. Not gonna lie, I kinda expected a shocked Kayla to tell Ciara that she was, like, four months along in her pregnancy. We know that MarDevil has plans for the Cin baby, and I can’t really imagine this possession story going on long enough for Ciara to go through a “normal” pregnancy.

While a lot of people have referenced the classic film Rosemary’s Baby when talking about this storyline, I can’t help remembering how a similar tale unfolded on the classic sitcom Soap. Viewers of that genre-mocking spoof opera will recall that Corrine had a baby in record time, only to then discover that the newborn was possessed. Much hilarity (including the clip below) ensued before Corrine’s mom, Jessica, gave an impassioned speech in which she banished the devil by declaring, “You’ve come to the wrong house!”

• It’ll be interesting to see how things play out next week, given that several locals had encounters with zombies. Will Gabi and Jake tell Rafe about having dealt with Nick, which would perhaps leave the cop a little more inclined to believe Ava’s story about her son’s visit!

Above: Here’s hoping Duke didn’t have to watch this!

More: Robert Scott Wilson has good news for you

• Speaking of Rafe, I was disappointed in him for sleeping with Nicole. I mean, he didn’t even bother to talk to Ava, instead assuming the worst of her and then hitting the sheets… er, the desktop with Nicole.

• I found myself really missing Paulina this week, but knowing we’re heading toward some big, juicy stuff with her and Abe helped.

• Victor snarking before — and grimacing through — Justin and Bonnie’s wedding was my favorite part of that storyline, which felt rushed and left me worried that the newlyweds will wind up with nothing to do and be ushered to the backburner. Then again, after that awful Calista fiasco, maybe that wouldn’t be the worst thing in the world.

Now that I’ve shared my take on this week’s episodes (and yes, your regular Soapboxer Lori Wilson will return next week), hit the comments to share your highs and lows. Then see what else November Sweeps has in store (as well as what we hope to see) in our previews and predictions. Plus, celebrate Thaao Penghlis’ 40th (!) anniversary as Tony DiMera with the below photo album full of memories. 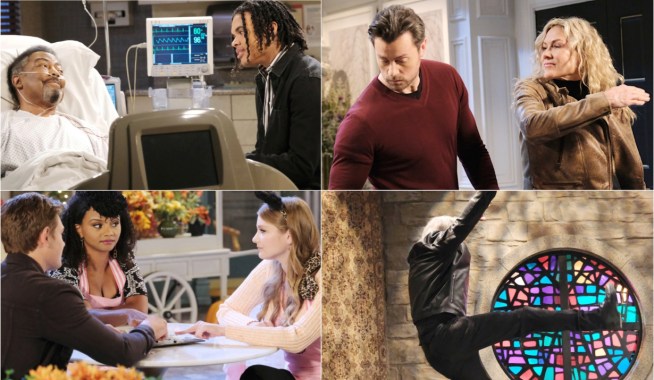 Days of Our Lives Upped the Bonkers Factor With a Cat, SuDevil, and... Eileen Davidson??!! 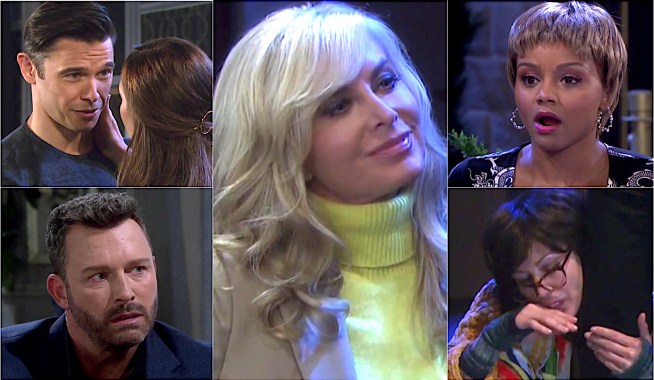