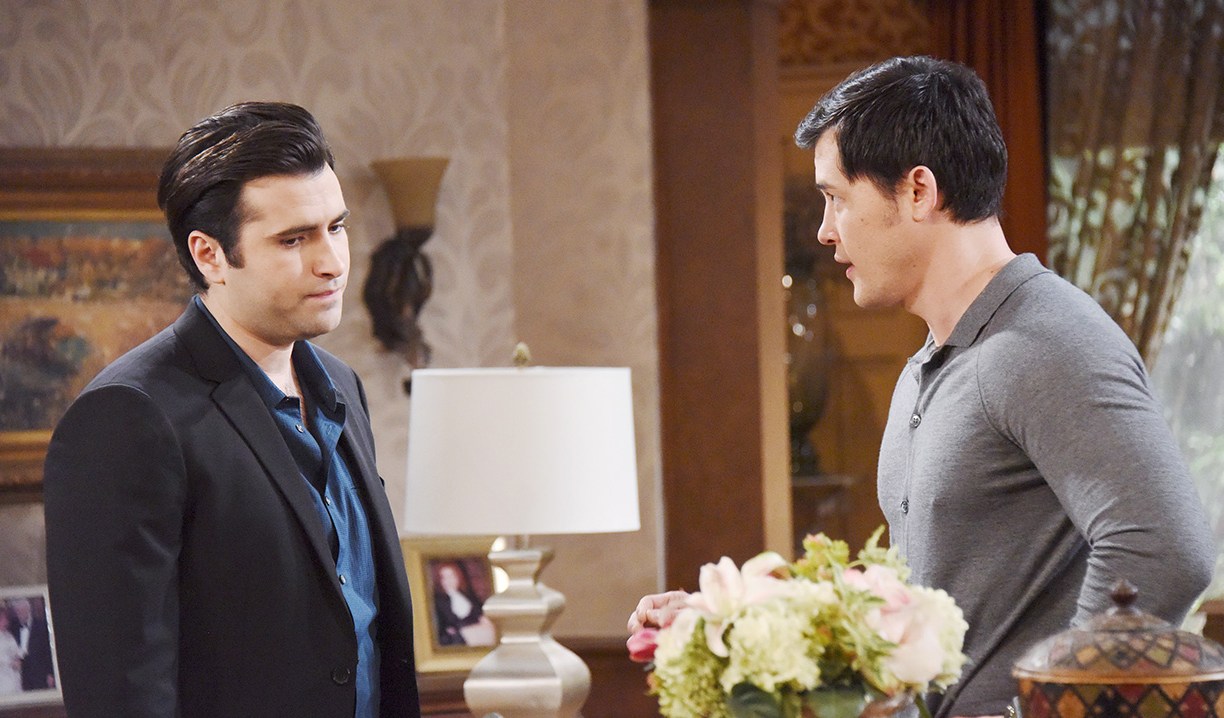 We’ve gone taken the DeLorean back to 1950 again and the theme of the week was adults asking for permission to marry someone’s daughter. There are still bizarre continuity issues that we hope are resolved by the next writing regime in 2 weeks but otherwise, you can already see a bit of a change in the show – for the better!

“Great Scott, it’s a time paradox, the result of which could cause a chain reaction that would unravel the very fabric of the space-time continuum and destroy the entire universe.” – Doc Brown.
Friday Hope was on death’s door but true to “Days” writing lately, the show skipped through the good parts of how she got better and Monday, though wasn’t released from the hospital, she waltzed into SPD to get back to work. As usual, for the next two days, we all wondered if we’d missed an entire day but by Wednesday’s show, Nurse Shelly was talking about how Kayla allegedly prescribed the wrong dosage for Hope Brady “last week,” and we were in shock, grateful at least that the show had touched base upon the timing. Then Thursday’s episode, Marlena hypnotized Lani about “the events that happened last night” at the Martin House. Um. Is the hospital in a time warp?

That awful hospital administrator.
Did anyone else want to get in Seth Burns face and tell him to shut the hell up when he was reaming out Kayla in public? What if a random patient heard that? They wouldn’t want Kay as their doctor, or Chief of Staff, based on that. And it’s Salem. We know everyone eavesdrops in Salem. Brady’s mood.
Living with a constantly whiny woman who is unable to forgive his saintly brother must be rough enough on Brady, but he has to cover for Sonny who isn’t doing his job. On top of all that, he heard that his woman made out with said brother while under the influence of Halo 2.0. Brady might want to attend a few AA meetings. Unless there’s something else that’s bothering him? I’d love to hear your thoughts on that.

Whodunit?
In the last Deconstructing DOOL we rounded up the suspects in Deimos’ murder. Thanks to the insightful comments, we should be adding Rory, the water, and Deimos’s goon to the list. Viewer, Jackie Koons, even stated that the killer could have been Dario teaming up with the goon. Aside from asking whodunit, we’re also wondering who has the cursed amulet. I’m leaning toward Dario being the murderer, even though it feels possibly too obvious. Dario’s greed could mean that he also has the amulet. Maybe Myron helped him. Maybe Dario tried to steal it from Deimos and accidentally or purposefully killed him to get it. Of course, it could be anyone on that long list of suspects. Half had an altercation with Deimos. The innocent marrying her stalker.
I admit my attention wandered during Dario’s creepy wedding vows. They seem to have creeped Abigail out, too, and she could barely speak. It didn’t help that Chad sat there shooting daggers with his eyes! An eye-roll or a chuckle at Abe asking Abigail’s mommy for permission to get married would have gone a long way. There’s a lot of this going around…

The only place Rafe didn’t run to was to Hong Kong to ask Shawn’s permission!
Wednesday’s episode was surprising when Julie made Rafe ask Doug for Hope’s hand in marriage and he said, “But she’s a grown woman,” with that ‘are you effing kidding me’ look that he sometimes gets. It made me laugh. It was utterly ridiculous, yet in good humour, Rafe did it anyway, which was sweet and funny and reminded us he’s in love. We haven’t seen his good-natured side of him for a few years and it was welcomed. Even though I’ve never been a big Rope fan, I found it endearing that after Doug gave him his blessing that he sent him to Victor, since Bo’s dead and already gave his blessing. Vic related to him, being that he married Maggie after wonderful Mickey had died, reminding us that Rafe’s got big shoes to fill after our Bo. Then Vic sent poor Rafe to Roman who was like ‘dude, you don’t need anyone’s permission’. Roman’s right, of course. But the scenes were cool, the dialogue enjoyable. It was a perfect way to see all of those vets that we don’t get to see that often, especially in one day. Kudos!

But those are just my thoughts…

Ridiculous! One of the worst #days pairings. #cuttherope

@nbcdays There is nothing cute about #Rope. This couple makes 3/4 of your audience sick & your ratings should make that obvious. Stop it!

Normally don’t like Rafe or Rope but this was cute.

If I liked them as a couple. I’d think it was sort of cute. Instead I think it is really dumb because I just want it to stop.

Friday’s episode.
Friday’s episode had a completely different feel to it – in a good way. We got a warm and fuzzy feeling when Lucas mentioned Billie and Austin, and Lucas’ reaction to Kate’s marriage was pretty funny, as were her claims that she always tried to be supportive of her children’s decisions in life. Andre and Kate’s oddball marriage was light and silly, and refreshing, especially after so much darkness. But it’s doubtful that Sonny or JJ killed Deimos.

This is one woman’s opinion – please share your own in the comments!

Victor, “I don’t mean to be glib about this but what does it matter who killed him? He drugged an entire house full of people without any regard for any of them.”