Is [Spoiler] About to Become a Possessed Marlena’s First Victim? Plus, Why Ben and Ciara Need to Slow Their Baby-Making Roll 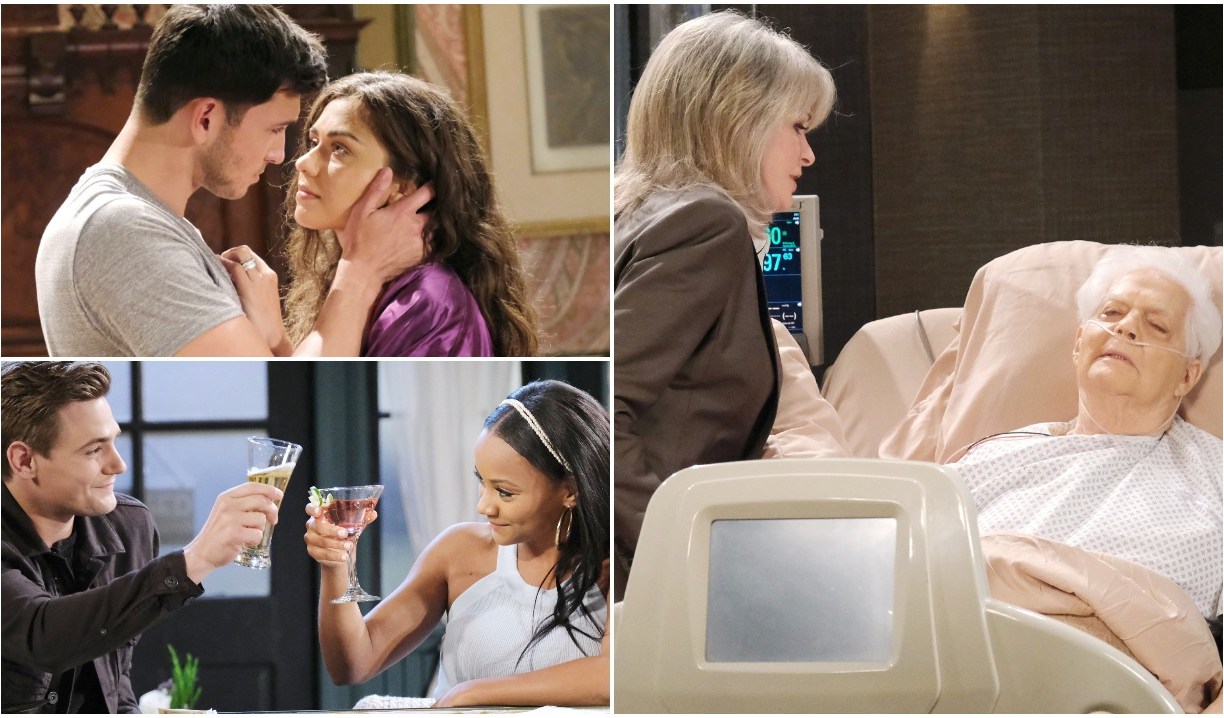 How you felt about Days of Our Lives this week probably depended on two things: which episode you were watching and whether you’re into the possession storyline. While a couple episodes were pretty much all about the devil’s return to Salem, we also got some sweet romance, red-hot revenge and a whole lot of historic references. Ready to discuss the week that was? Then let’s dive in…

I fully admit to being a very big fan of the original possession story. While some point to it as an example of everything wrong with daytime, I just remember being enthralled as Marlena’s reign of terror unfolded. I mean, with an assist from her dark passenger (to borrow a phrase from Dexter), she desecrated churches and terrorized the town. When she levitated, I’m pretty sure I screamed. At the very least, I yelped. 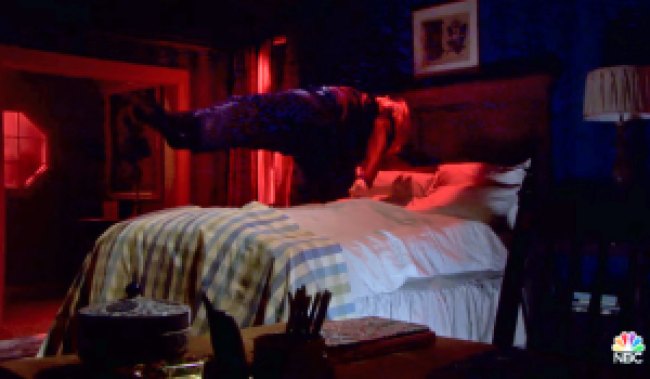 Above: That’s one way to avoid having to make the bed.

All of which has me both excited and nervous about satan’s small-screen return. I can’t wait to see headwriter Ron Carlivati’s spin on the story, but I also wonder how they can up the stakes? What new twists will prevent this from having a “been there, possessed that” feeling?

So far, they’re off to a good start. Using a weakened Doug to force Marlena into willingly accepting the devil back into her life and body was friggin’ brilliant. Sure, having Demon Doug wiggle his fingers like Willy Wonka summoning a horde of Oompa Loompas wasn’t exactly chilling stuff, but one of the things which made the original story work so well was the human factor, and right from the start, with Marlena’s sacrifice, that’s what we have here.

Meanwhile, the show gave us another great cliffhanger as she-devil Marlena stood by Doug’s bedside, determined to keep him from blabbing about her return. Would the show really kill Doug? Tune in tomorrow… fine, fine, Monday.

Are We Having Fun Yet?

There’s nothing I love more than a really strong script. Giving the characters interesting things to say can make even a plot I’m not interested in fast-forward proof. While The Bold and the Beautiful aired a totally skippable episode this week in which characters sat around complimenting one another, Days had great dialogue such as this exchange: 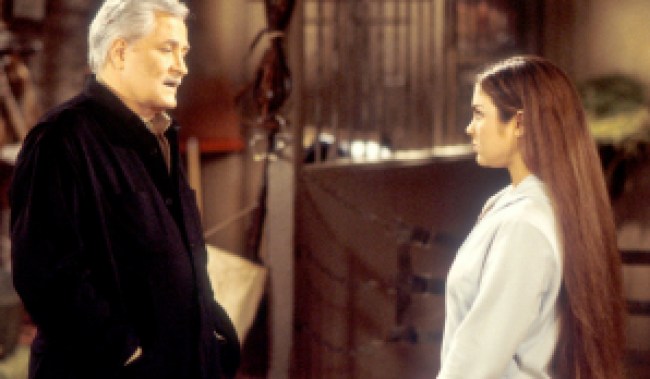 Above: Victor’s disdain for Chloe has its roots in her long-ago refusal to share with him the secret to her enviably luscious locks.

More: Are two Days favorites heading back to Salem?

The same episode featured fantastically fun scenes in which Gabi and Stefan tried to kick Chad out of the DiMera mansion only to have the tables turned on them when EJ revealed he’d bought the place and booted them, instead. Did I understand the mechanics of how EJ stole the place out from under Gabi? Nope. But it didn’t matter because the quips were flying fast and furious.

GABI: You’re not being very welcoming.
CHAD: That’s because you’re not welcome here.

Gone, But Not Forgotten

Sami may not be on the canvas at the moment, but the writers have found ways to keep her front-and-center. First, there was that call Johnny received from his mom which, after they were disconnected, was followed up by a text saying he shouldn’t reach out to her again because she was “tied up at the moment.” (Pretty sure we’ll eventually find out Sami managed to steal her phone from whoever is holding her hostage and call Johnny. But she was, of course, caught in the act and her kidnapper then sent the text… before tying her up.) 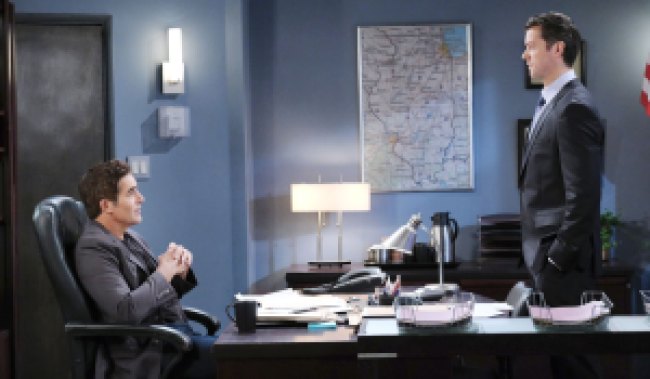 Above: “I’d suggest you take a seat, EJ, but you’d just take that as an invitation to steal it.”

Then there were the scenes in which EJ went to see Rafe about the much-discussed million dollars. Given their history, of course Sami’s name came up during their discussion despite her having absolutely nothing to do with their interaction. Galen Gering (Rafe) and Dan Feuerriegel (EJ) perfectly played the animosity between the two men, which also led to my favorite line of the week. When EJ said he knew that his rival disliked him, Rafe quipped, “Dislike is such a tepid word for how I feel about you.”

I wasn’t a big fan of the twist that saw Gwen accusing Abigail of causing her miscarriage. At the time, the whole thing felt ugly and, given that the audience already had a hate-on for Gwen, unnecessary. That said, this week’s scenes in which Abigail apologized for her actions as a tormented Gwen was eaten alive by guilt were beautifully written and played. 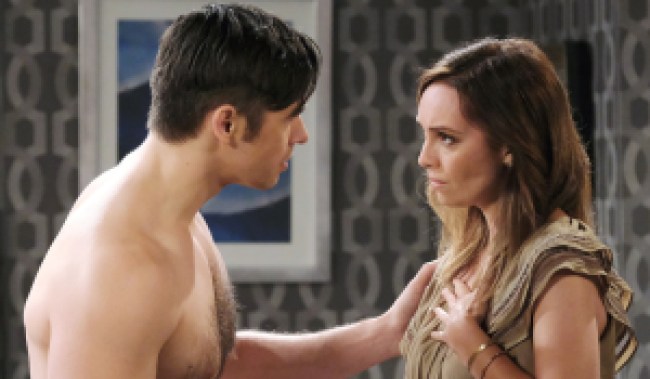 Above: “I understand, Gwen. Sometimes, the sight of me naked leaves me breathless, too.”

I don’t know if it’s too late to “humanize” Gwen in the eyes of the audience, but portrayer Emily O’Brien did beautiful work during the scenes in which the Brit opened up to Paul Telfer’s Xander. I kinda dig the way these two terribly broken characters are being drawn together, especially knowing that Sarah is out there somewhere — I’m guessing on Melaswen, probably with Sami? — waiting to throw a monkey wrench into thing. I suspect that should Sarah resurface, it’ll be tough for fans to see Xander with anyone else, but it’s worth a try, right?

• Longtime viewers were treated to a smorgasbord of historical references and flashbacks this week… including the unexpected ones of John and Marlena’s infamous table-top romp, complete with references to how seeing them in the act changed Sami’s life forever. 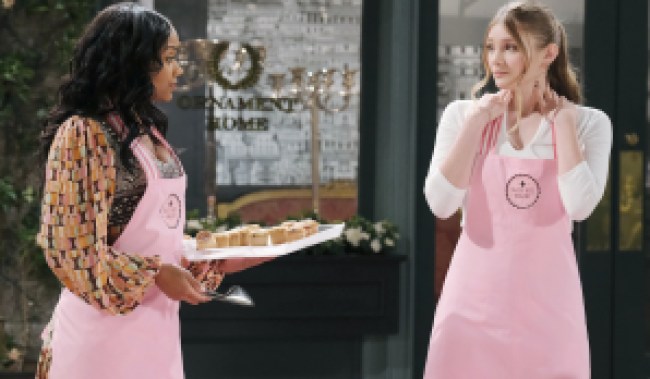 Above: “I didn’t bring drinks to go with our baked goods,” admitted a chagrined Allie. “When you said your milkshake brought all the boys to the yard, I thought we were covered!”

• The Johnny/Chanel/Allie/Tripp story continues to be a total winner for me, in large part because of the wildly charismatic Raven Bowens, who makes it easy to believe that everyone crossing Chanel’s path would obviously fall in love with her.

• It’s impossible for any soap fan to hear Gabi reminding anyone who’ll listen that the DiMera mansion is hers because Stefan left it to her and not immediately think of General Hospital‘s Monica saying the same thing about Alan having left her the Quartermaine manse.

• It was a mostly Cin-free week and when finally we did catch up with them, it was so they could talk about babies. I still think it’s foolish to rush this couple straight from marriage to babies. Surely there are other storylines to pursue with Ben and Ciara… such as, I don’t know, them finding the kind of gainful employment that would allow them to afford a child? As Ben recently pointed out, he ain’t exactly raking in the big bucks working as a mechanic! These two need to slow their baby-making roll and be given something to do. So far, they have no discernible connection to the possession plot, which could leave them on the outside looking in as what’s clearly an umbrella storyline unfolds in the weeks ahead.

That’s my take on this week’s episodes… now let’s hear yours. But before running off to the comments section, check out this collection of wildly unpopular characters, including a flame-haired Days of Our Lives vixen who viewers pretty much hated with a burning passion. 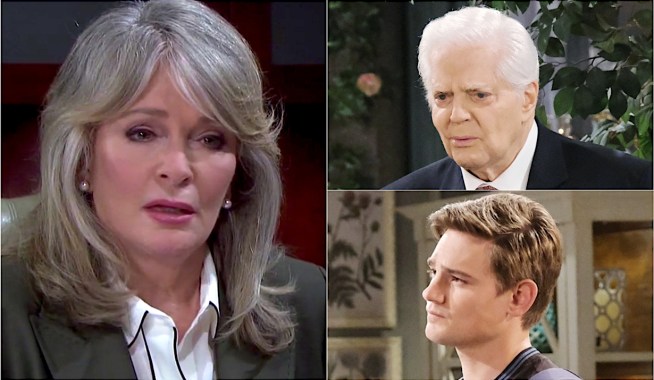 Days of Our Lives' Delivered With a Devil of a Cliffhanger: 'That's How You Do It' — Plus, Johnny's Movie Promises Must-See Drama 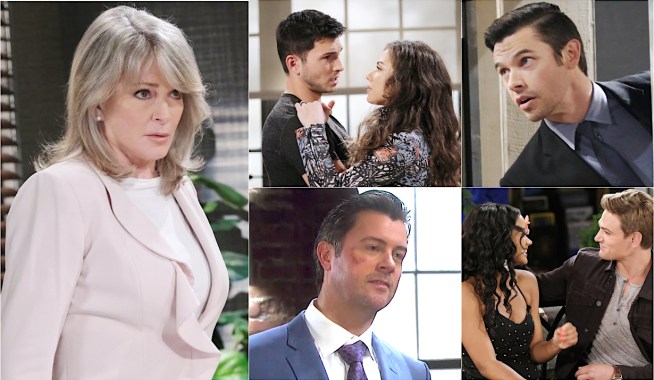