Deconstructing DOOL: Will the Nicole & Brady Show ever end? 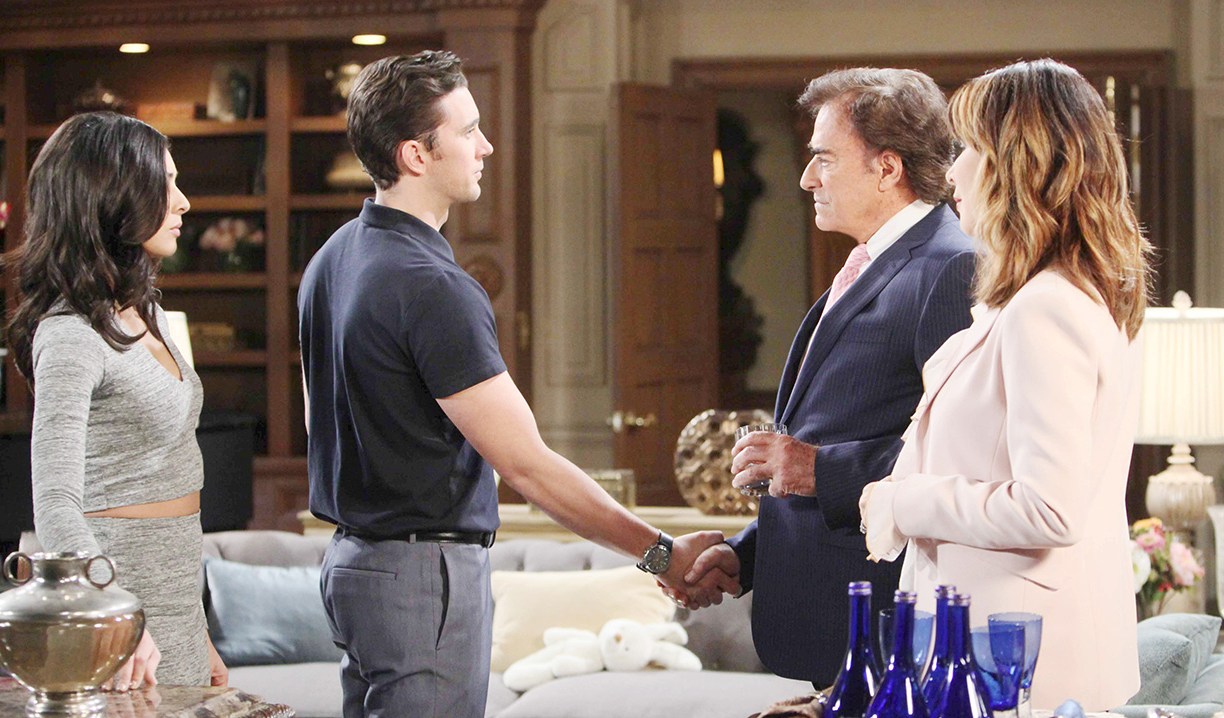 Watching “Days” is like reading a book after someone has torn out several pages. There’s still a lot of telling vs. showing and it’s grating on viewers’ last nerves. Four weeks is how long it’ll take for us to see Ron Carlivati’s writing on Days, for which we are grateful.

Maybe they should have stuck baby Holly on the scripts and made them come alive. Worked for Brady.

Soap kids.
Holly’s a few months old, yet Chloe says she has already pulled herself up on her knees and will soon be crawling. Uh really? Yet Tate, who was born in April 2015, and who should be walking by now, appears to be de-SORASED! Chloe finally returned Holly to Nicole and the scene was sweet, and the acting was terrific. Yet it was all for naught because they were back in the judge’s chambers Friday to drag it on some more. Not that I disagree with the judge, but when will the Brady, Daniel and Nicole Show ever end? Will we stop hearing about the perfect, angelic Daniel once Ron C’s writing begins? For a person who enjoyed both Nicole and Daniel’s characters, I’m now counting the days until they’re off my screen. Thanks Higley.

The castaways returned home.
If it wasn’t enough that the actual crash wasn’t aired, when the Salemites heard the Kiriakis plane went missing, none of them seemed especially concerned with the exception of Adrienne. Sadly, we weren’t privy to the other’s pain, which is mind-boggling. The last big fail is that we didn’t get to see John and Marlena’s search of the islands. We want to see the entire story – which I’ve repeated ad museum. Even the ones who should have shown more emotion played it down quite a bit, which made us feel as though no real harm would become of anyone “vacationing on the island,” as Victor put it. If Sami was still around she’d have displayed anger and sorrow. There’d be tears! Either we need Sami back or we need somebody with her passion!

Some good came of the island storyline.
Though once again we did not see this, Eli going missing had both him and Val reflecting on their relationship and upon reuniting, all was forgiven. Both actors are talented and it was easy to be touched by their reunion. Julie’s gift of the Martin House came out of left field. We’re to assume that Julie and Doug bought the house back from Kate, and hired someone to take over the bed and breakfast business. Hmm but does the young and unencumbered Eli really want to live in a house where there’s no privacy? Maybe that’s the point for the upcoming storyline…

Kate’s thoughts on her love life.
As mentioned in the last Deconstructing DOOL, Andre and Kate’s scenes were a highlight of the week. Though I enjoy that they aren’t on the same side concerning which lovely lady Chad should be with, Kate was hilariously hypocritical telling Andre, “A move against her [Gabi] is a move against him [Chad] – and me.” I only wish Lucas was there to fall to the floor with laughter. Once again we wonder if there is more to Andre’s preference for Abs than we know.

Bros before hos.
There is supposed to be some “unwritten rule” that you can’t date your friend’s ex or that you should choose friends before lovers. And then on the other hand, the poet John Lyly once said, “All is fair in love in war” meaning that the rules of fair play don’t apply for either. So whichever one you subscribe to has to do with your own perception. I believe many viewers think Gabi dating Chad is her being a lousy friend. Gabi made a point that she and Chad tried to get over each other but it didn’t work. But is that really how things went down for Chad? She can speak for herself but if Abigail hadn’t dumped his ass, Chad may not have ever left her. Let’s hope it doesn’t get more complicated with a surprise pregnancy!

Oh Eric.
Eric still has feelings for Nicole. Either he needs to get over it considering she’s in love with his brother now, or he can consider that Nicole was in love with him a few years ago, then Dr. Dan a year ago and Deimos three months ago so hey – maybe it’s coming full circle. Haha! Jenn Jenn was smart and didn’t want to play second fiddle so she dumped him. It’s a shame that they keep putting two characters together only to fling them apart just as fast. Whether we loved or loathed this almost couple, it’s still off-putting in any story.

Paul and Sonny, BFFs or lovers?
It’s Pride month and yet the gays on “Days” still can’t catch a break. Higley has written these two as though they’re BFFs, not a couple, not the lovers that they should be acting like. There’s a disconnect when viewers don’t see a couple share loving kisses at the very least. While the entire show is too conservative for my personal taste, it irks me that Theo and Claire who are maybe 17 were shown making love yet Paul and Sonny, two grown men, aren’t shown making love or even basking in the afterglow.

Rory to the rescue!
The irony didn’t escape viewers that Hope and Rafe aren’t always the best detectives that they had to get our favourite stoner, Rory, to tell them who The Candyman is. Hehe

Maybe if they actually left the station they would catch someone. — Forever SAFE⌛️ (@Forever_SAFE) June 21, 2017

OF course he did #Rope was probably to busy covering up thier crimes or in a bubble bath! but no worries they will take full honors for this

Best lines:
Andre asks if Kate wants to move her things into his room. Kate, “Remember ground rules?”
Andre, “Yes, I was just hoping it slipped your mind!”

Kate to Chad, “I’m thinking that being stranded on that island wasn’t quite the ordeal that we thought it was.”