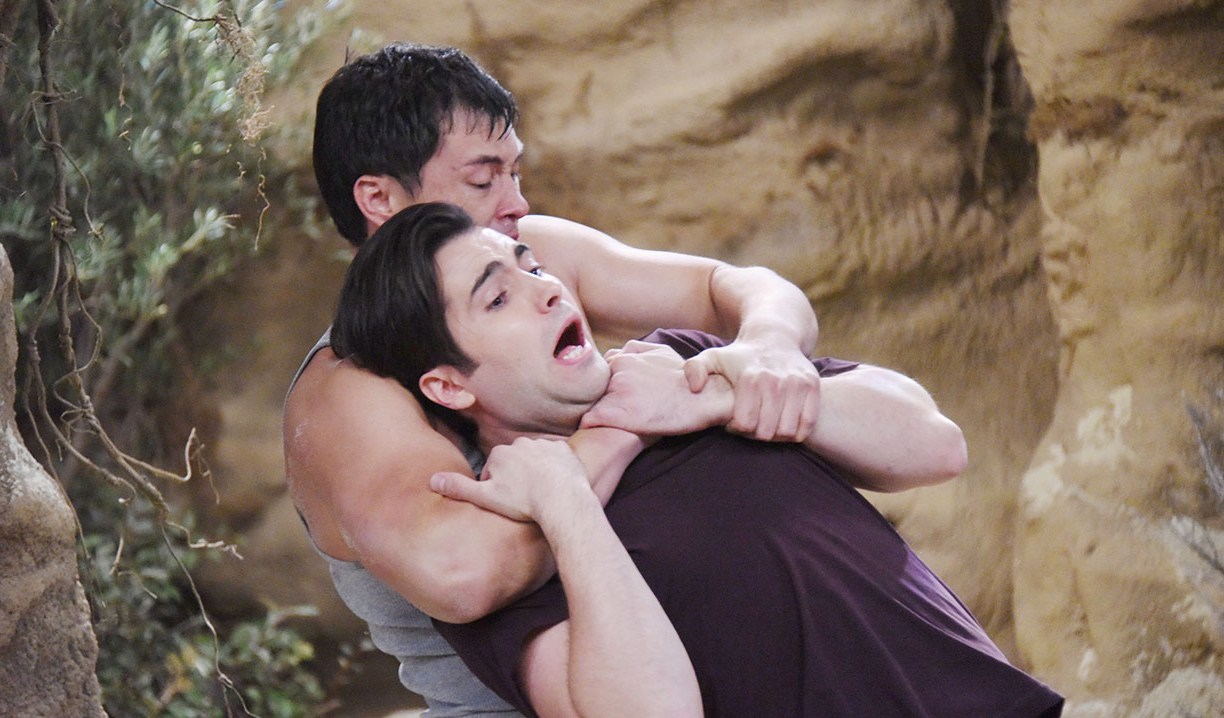 Short term returns in soaps can be fun stunts to gain more viewers as long as they’re combined with building the long-term characters so viewers stick around long after. Though I don’t need soaps to teach me lessons in morality, I wouldn’t mind if they were just a little more realistic where it counts such as with Nicole’s prison sentencing. If it’s too much to accommodate the consequences it takes readers outside of the story.

Stunt casting is always a failure!

Kate and Andre, the “happy couple.”
This is a couple I can get behind because of all of their zaniness, refusal to give a crap about having a “real marriage” and…those rules. Kate: “No sex, at least not between the two of us. No sharing a bed.” Andre: “No talking to me, especially not in that tone of voice when you want something. And not before I’ve had my morning coffee.” Though I found it difficult to believe that the board wants to break DiMera Enterprises up while Chad’s missing only a week, I’ll go along with it only because…that wedding! What a scream.

In the plot driven twist of the year, Chloe finally comes to her senses.
Chloe has been out of her mind with worry over Holly’s kidnapping which allowed her to understand how her sometime BFF Nicole felt having her kid taken from her. Hmm okay. At least Chloe is back to being Chloe. I just want to move on. Nicole basically skated even though she has a lengthy criminal record. She even kind of thanked Eric for saving her life and going to bat for her by encouraging Chloe to make a statement at the sentencing though her heart wasn’t in it and it pissed Brady and I off that she couldn’t forgive him. But then my annoying voice of reason reminded me that people forgive on their own time frame. Not ours. Sometimes I hate that voice of reason!

The Trippster isn’t physician material.
Tripp trying to ruin Kayla’s career based on a slim possibility that Kayla might have killed Ava is a stretch. Would he really be willing to go to prison for someone he never met? Also, he could hurt Brady or someone else while he’s playing with patient charts, then hurt his chances as a future doctor.

Jade: “I didn’t think sex had to be that private.”
Hope gave Claire sound advice about fame leaving you empty. I adored their scene and Claire in that moment. Jade ‘she’ll thank me for it later’ Michaels helped create vulnerability for Claire by going behind her back creating the sex video which allowed some to feel sympathy for her but that diminished when she confronted Jade about making the sex tape. I’m not defending Jade but Claire was abusive which then endeared me to Jade. Then Claire wouldn’t (not “wou-int”) forgive Theo for his accusations which could have them on the outs until Ciara returns.

Jungle madness.
As Dustin mentioned in the last Deconstructing DOOL, the island storyline still isn’t grabbing me except for Paul “Ironman” Narita who has been brilliant, along with Sonny’s heartbreak. Gabi and Chad’s interaction goes from sweet to sexy, to forced to cheesy then icky, which is confusing. Mostly I think he should be licking his wounds, not starting a new relationship yet especially when he’s still in love with two women. Some of my readers expressed annoyance that in my columns I never call Chad a “douche” for his part in this triangle but it all comes down to our perception. I’ve never seen him as a douche but I respect your opinion.

Lani wants the D.
JJ is worried he’ll hurt Lani so is taking things excruciatingly slow for her because he didn’t give her the Good & Plenty in the sand that day she found the skull. Hey, skulls don’t make me hot either, JJ. Plus, they’ve no protection. It feels like they’re gearing up to break Lani and JJ up so they can pair her with Eli. They’ve great chemistry but it’s scary to invest.

Hope’s investigation.
Hope’s about as subtle as a freight train with her investigation of Dario and GDR. Does she want to scare them into going underground?

Jenn’s the voice of reason.
Jennifer gave Abigail a reason not to get that quickie divorce. That scene was intense and Marci Miller rocked it, making us concerned when she was letting the crazy back. Though it appears as though Chad has “moved on” with Gabi especially with Friday’s sex in the sand scene, but for how long? Hopefully we don’t see a child come of that.

Anjelica’s return.
So far it’s not really much of a revenge story now is it? Still, it was nice to be reminded of Jack.

This is one fan’s opinion – please share your own in the comments! Agree or disagree, I’m interested.

Kate to Andre, “I need to become a DiMera and God help me, you’re the only one left.”

Hope to Claire, “We Salemites lead such dull lives, don’t we?”

Andre to Kate, “We always have a supply of prenups on hand. Father married almost as many times as he died.”

Harold, “I hope I catch the bouquet.”

Deconstructing DOOL: Will the Nicole...