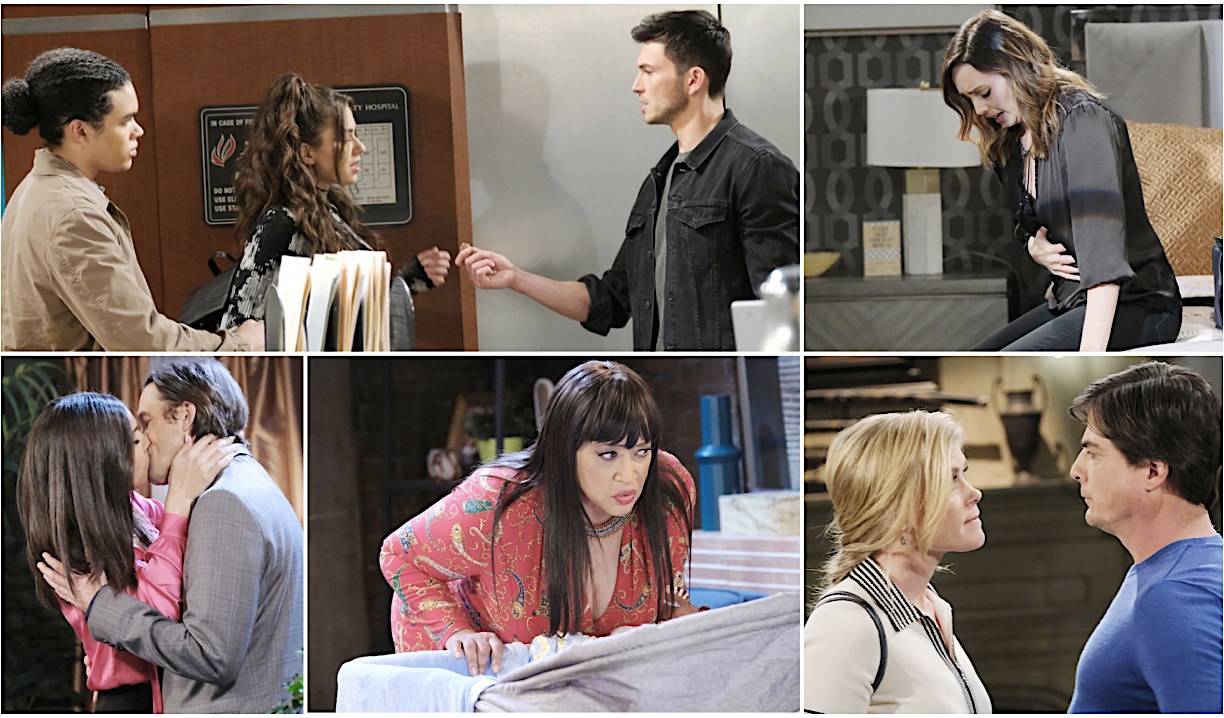 The pacing was really off on Days of Our Lives this week with storylines left on cliffhangers not picked up until days later. It was so bad they had what felt like a ten-minute flashback of Kate’s kidnapping to remind viewers why she was tied up in the wine cellar. I mean, Days doesn’t need much of an excuse to use a flashback but that was a bit much. Other stories were picked up mid-week after big developments from last week or completely dropped after their one episode of the week. Aside from that, a lot happened that we need to talk about. So, let’s get to it…

As much fun as it is to watch Lauren Koslow play Kristen pretending to be Kate, Kristen’s masks are officially too much. There’s suspending disbelief once or twice to believe she could fool people despite not being the same height or body type as the person she just so happens to have an exact replica mask of, but when it happens every week it goes beyond fun and camp. Not to mention — when, where, how does she get them on a moment’s notice?

More: The most successful daytime actors in primetime, ranked

Who is Kristen’s mask person? And are they on speed dial? #Days

Listen! All these wigs and mask has got to stop. I love you cousin Ron but enough is enough. #days

Is it Goodbye? Hello? See Ya Soon?

My first reaction to watching Ciara get on that elevator with Theo was… that’s it? Her goodbye felt like an afterthought shoved into an already full episode. But mostly, why re-tarnish Ben’s character just to have her leave with no memories of their love?

But then, we learned there are already plans to bring Ciara back this summer and I had new thoughts.

Instagram commenter mellojenni might have summed up my reaction best: “Yay and ugh.” For me, that means, yay, she’s coming back and there’s hope for Ciara and Ben but, ugh, what if she doesn’t stay and it just leads to more torture for Ben and Cin fans?

Over on Facebook, Kathy C. said, “I like her a lot but once the people you are interested in leave it is never the same. Same as with [Sami] you know she isn’t staying so you can’t get into the stories about them.”

There are, however, those who are all for the angst, like Ashtonion below:

This #Cin story is gonna get really good once Ciara returns. I’m good with the pacing. #Days always loves to rush the reunions and I am good with all this angst. Ciara is gonna be so upset with herself when she realizes what she put Ben through, but it’s gonna be good.

I do believe we should wait to see what happens but based on this last go around with Ben reverting to his crazed stalker ways, trying to force a drug on Ciara, and then wanting to kidnap her, plus, the no guarantee on how long Victoria Konefal will stick around (no blame or judgment on the actress), I’m a little leery.

Xander and Chanel’s entertaining yet short-lived marriage seemingly, came to an end this week. I’m actually glad it didn’t overstay its welcome and wrapped but before their high jinx was played into the ground or turned into an actual romance. Not to mention, there’s no way Chanel and Xander should have gotten the better of the very savvy Paulina, who left town with a secret. I’m super intrigued by her whispering it to Jules and Carver before her exit and hope it leads to something good and juicy when she returns.

Xanel’s end doesn’t mean the end of humor though as Sami and Lucas picked up where they left off and ran with it this week. While I wish their storyline was more about Sami trying to hide her one night with Lucas from EJ as they fall deeper into an affair, and a lot less about Lucas lying to Chloe about having a brain tumor, their shenanigans are highly entertaining.

This whole mess with Sami/Lucas/Chloe/Brady/Kristen is so much fun to watch. A storyline centered on two amazing couples with decades of history, and an iconic villain played by an actress who is so good at being evil… Love it! #Lumi #Broe #Days

Frenemies Moving on Together

I get why Gabi can’t let go of Jake even though he doesn’t really deserve it. Many of us have been there but I’m hoping she sees the light and turns to Philip for real. They have great chemistry, he’s been honest and upfront with her, he’s respectful of what she wants, and I just want to see more of them.

Speaking of Gabi, I need more scenes of her and Abigail. Based on their history, they should never, ever be cordial to each other but their banter at Julie’s Place was too much fun to not want more of. Also, I much prefer the “You go to therapy by yourself” Abigail to the “I will try to overlook the fact that Chad is having a baby with someone else and let our love guide us” Abigail. I hope we get more of the former especially as the fallout to Gwen’s tumble down the stairs looks to be going where we think it is.

Winners of the Week

Jake called it as he saw it twice this week and he was dead on both times — earning him the Winner of the Week title.

Jake to Chad after he confessed Gwen is pregnant with his child: “Oh, crap. I’m sorry man, but It’s kind of your doing, right?” Yes, Jake, yes it is.

Philip to Jake: “Gabi’s not over you. Not by a long shot.”

Jake: “No man. She’s not over my brother… who I just happen to look like.” Yes, Jake, exactly.

Claire pushing back against Ben’s latest dangerous impulse while stating the obvious: “If you kidnap Ciara she’s going to freak out. Ben, she’s going to be traumatized.”

Paulina to Chanel: “You made this particular bed — and it’s the only bed you ever made up in your entire life I might add — you lie in it.”

These are just my thoughts on the week in Salem. What are yours? Tell us in the comments below and then look through our soap opera photo gallery of silly outtakes from photo shoots over the years.

Days of Our Lives' Character...

Sami’s Blast From the Past...