Days of Our Lives’ Ciara and Ben Need to Disconnect Their Psychic Hotline, But Paulina Should Keep Callin’ People Out 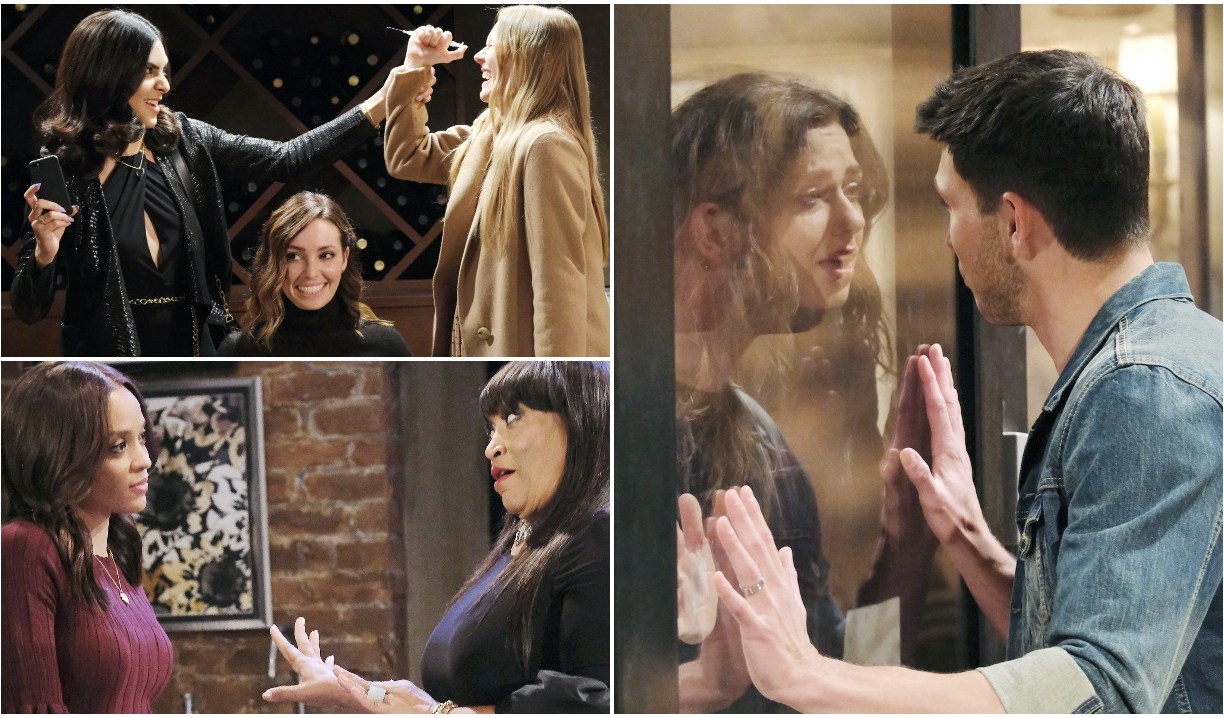 I’m using the power of my mind to cry out for help… can you hear me? If so, bring tequila… and maybe some nachos. We’ve got a lot to talk about this week, so we’re going to need our strength. From Ciara literally connecting with Ben by just kinda shouting into the air to Paulina speaking some serious truths, this week’s episodes of Days of Our Lives were a bit of a mixed bag…

Voices In My Head

I’m not gonna lie… I literally laughed when Ciara called out to Ben, and he was able to hear her. This wasn’t just one of those scenes where a character “feels” the presence of another, she was actually speaking things into the air, which he then understood as if she’d dialed him via her Psychic Friends & Family plan. Wanting confirmation that this was as silly as it seemed — because let’s face it, I can be a bit jaded sometimes — I ran to get my best friend, Charlie (aka the site’s Deputy Editor) whose response was, and I quote, “Oh dear.” 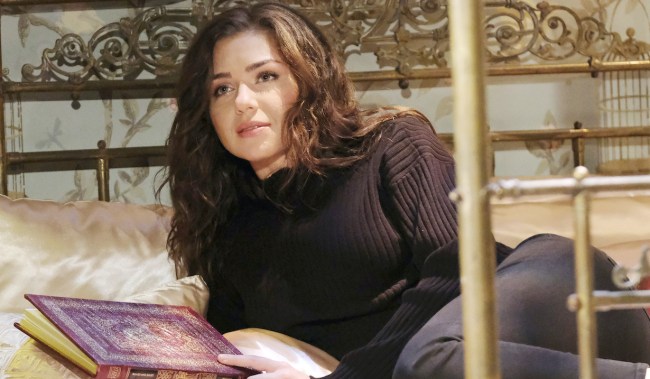 “Ben, if you get this telepathic message… bring ice cream.”

Here’s the thing: You know how in elementary school, you had that friend who everyone picked on? The one you did your darnedest to protect? That’s how we feel about soaps. So when one of them does something that we know is gonna get them mocked, part of us goes into defense mode while the other says, “Come on, you had to know that wasn’t going to go well.”

I know that Ben and Ciara fans will say it’s super romantic and goes to show how connected they are — and some have rallied in their defense (read why here) — and I’m glad they see it that way. But I saw something more than a little silly that also felt a little bit lazy. It’s as if someone said, “Well, we can have Ben and Shawn follow clues and question whether or not Ciara’s alive, or we can have Susan touch a fortune cookie and Ciara tell Ben what’s going on.”

And if all this time, Ciara coulda just hooked up with Ben psychically and said, “Hey, come and get me,” why did she only do it now?

More: Get your When Calls The Heart scoop here

The good news? Ben and Ciara are finally being reunited and can go back to declaring their love in person. Because I’m sure they’ll have smooth sailing from this point forward… right?

A Breath of Fresh Air

When Jackée Harry first arrived on the scene, I was equal parts thrilled and nervous. Would her Paulina wind up being little more than an updated version of her infamous 227 character? As it turns out, that is definitely not the case. 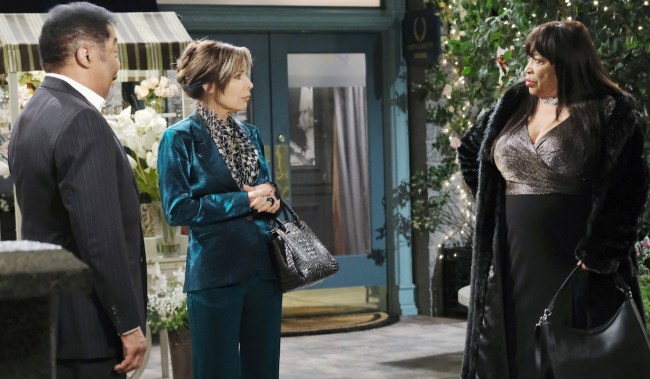 “You represent Basic Black? Well, I see the basic part… “

By the time she declared, “This town needs me,” I agreed wholeheartedly… and not just because the actress is so delightful. Paulina, as it turns out, is speaking some truths about Salem which happen to be a reflection of daytime as a whole.

“Salem,” she pointed out to Abe, “is whiter than the Alaskan tundra, and I’m not talkin’ about those miles and miles of picket fences.”

More: How dead Deluca could still return to Grey’s Anatomy

When Kate spoke about the fact that DiMera Enterprises prides itself on being an equal-opportunity employer, Paulina wasn’t going to let her spout corporate buzzwords. “I had the chance to look up your board on the corporate website,” she countered. “Jake Dimera, Brady Black, Chloe Lane, Nicole Brady… white, white, white.” Paulina then asked Abe how many shops in Horton Square were black-owned, practically shaming him for not knowing the answer.

More: Behind the scenes of Kristian Alfonso’s new project

Heck, Paulina even stopped Julie from making the faux pas of trying to touch Val’s hair (although I was disappointed that after saying it was a “teachable moment,” the actual explanation happened off screen — what a missed opportunity!).

Yup, this is a character daytime needs, desperately. I only hope that she is not only allowed to continue speaking her truth but that the message leads to actual change around the daytime dial.

Hey, a fan can dream.

As much as I’ve really enjoyed watching Camila Banus and Marci Miller work with one another — and man, do they play off each other well — I was glad that Gabi and Abigail’s plot to against Gwen was short-lived. I kind of expected that Gwen would be stuck in the DiMera wine cellar for at least a few weeks, but instead she was freed after a few days, allowing us to move to the far more interesting fallout for Chad and his troubled wife. And man, do I hope we get to sit in on this couple’s therapy sessions. That could make for some fantastic soap.

More: The only possible story for Days’ most-hated character 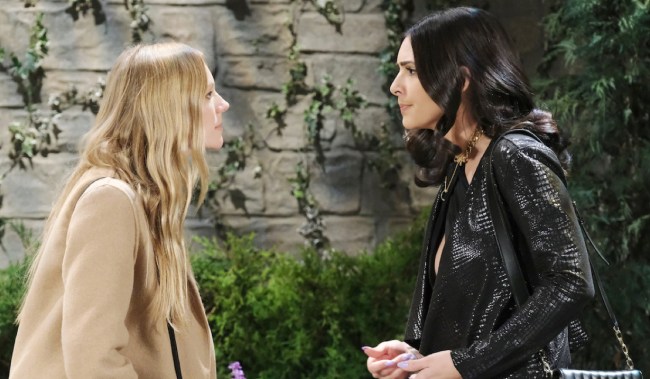 “Gabi, you killed Nick… twice! When do I get to have a little fun?”

If there’s one thing that baffled me, it was Gabi suddenly fearing things had gone too far. What in the world did she think Abigail intended to do with Gwen? Also, Gabi was the one who drugged Gwen and helped kidnap her… and sure, Gwen promised to leave her name out of it, but in what universe would anyone take her word for anything? 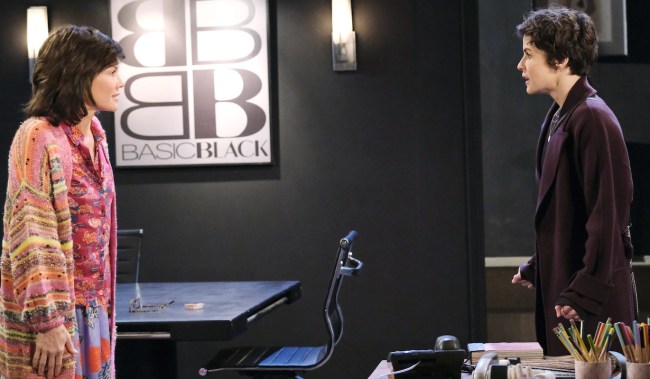 “Kristen, I’m shocked to see you… in so hideous an outfit!”

• The build-up to Sarah and Xander’s wedding really drove home that these two characters are pretty isolated. I mean, he had to ask Jack to be his best man while Sarah wound up with Bonnie, of all people, as her matron of honor! I suppose the real reason for that was so that Bonnie could awkwardly offer up some Rex-related exposition on the eve of his return. Meanwhile, why in the world would Kristen remove her Susan drag while at the Basic Black offices? Sooner or later, she’d have to leave there and head for Marlena’s. I might have bought it had Kristen had some kind of wardrobe malfunction which necessitated her removing the wig (and eyelashes!), but this just felt like a plot point which didn’t track at all.

• Keeping Ava under Rafe’s roof may not necessarily make a lot of sense, but it’s a smart move in that it helps move us toward a Nicole/Rafe/Ava triangle.

So that’s my thoughts on the week’s episodes… I’ll be anxious to hear yours. Do you love Paulina as much as I do? Did you find the Ben/Ciara stuff silly, despite maybe being fans of the couple? (Be honest… it’s just between us!) After discussing all things Days in the comment section, check out this really fun gallery in which we look at our favorite recurring bits from Days and all the shows. You know, things like the fact that people in Salem never wear a coat, even when outside in the dead of winter!