How Days of Our Lives Shook Things Up With Sami’s Killer Return — Plus, How Ciara’s Not Playing by the Soap Rules 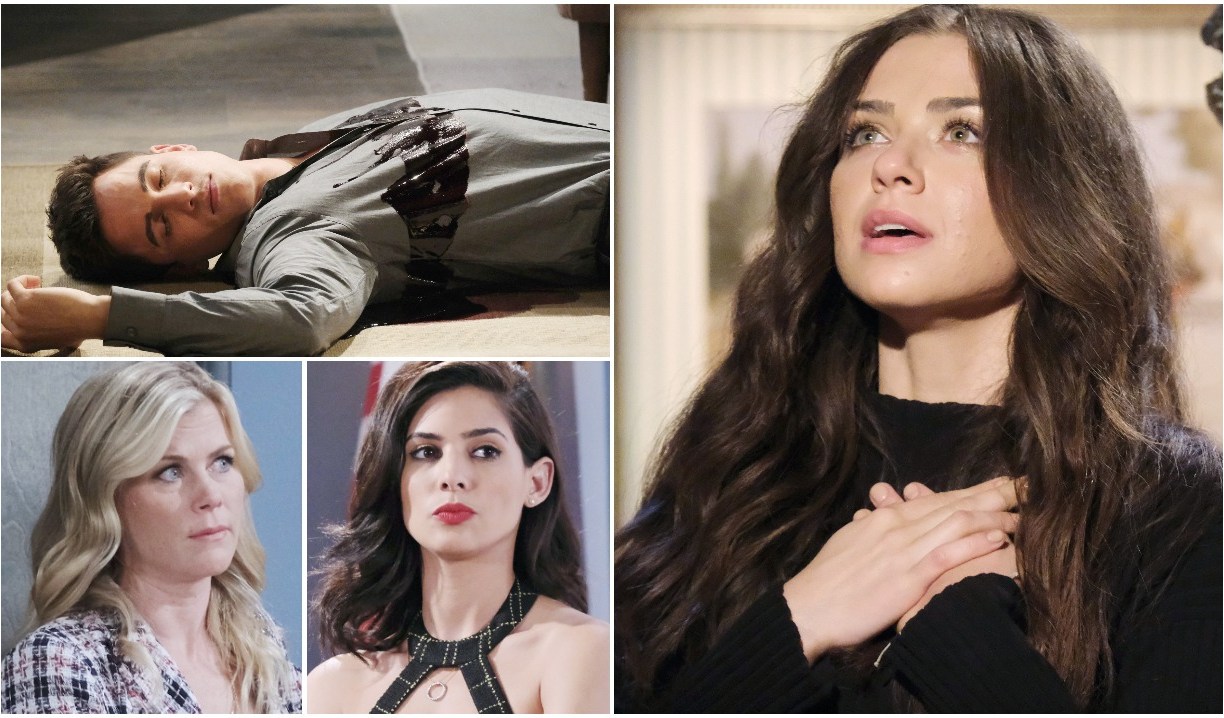 Fun fact: Because it almost never does national preemptions, Days of Our Lives is the only soap which actually stayed on schedule where their February sweeps storylines are concerned. Thanks to that, the show was able to go out with a literal bang with its take on a classic whodunit. But because this soap knows how to tell more than one story at a time — unlike some others (I’m lookin’ at you, Bold & Beautiful) — we’ve got a lot to talk about, so let’s get started.

There’s something wonderfully old-fashioned about the “Who Killed Charlie?” storyline. As someone who grew up watching similar mysteries built around the murders of characters like All My Children‘s Zach Grayson, General Hospital‘s Susan Moore and — perhaps my all-time favorite — The Edge of Night‘s Nora Fulton, I’m all in.

This one followed the standard playbook: Everyone in town threatened the guy, who later opened the door and said “Don’t shoot me” before being found dead the next morning as half the Salem population was seen asking the other half where they’d disappeared to the night before. I’m fully expecting an innocent person (likely Sami) will be arrested, we’ll get a juicy trial, and it will all climax in a (hopefully) stunning reveal. 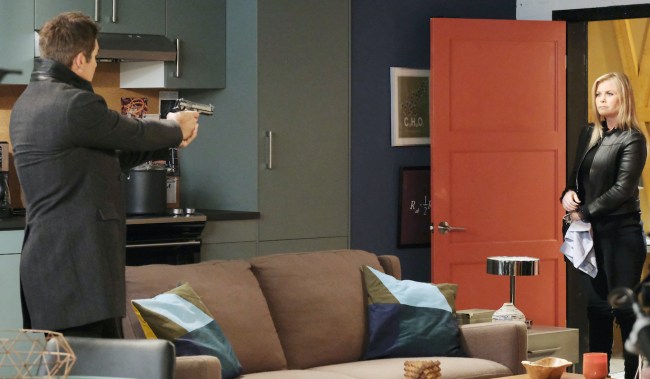 “Rafe, is that a gun in your hand or are you just happy to see me? Wow, that really doesn’t work unless the gun’s in your pocket, does it?”

All I ask is that when we find out who really pulled the trigger, it doesn’t turn out to be a pizza delivery boy whom Charlie never tipped. I want it to be a major player and — despite Charlie having been deserving of his fate — I want the killer to be punished.

More: What’s next for the newly-returned Sami?

I’ve really enjoyed the way the show is writing and Victoria Konefal is playing Ciara during this whole “lady in a cage” storyline. We’ve all seen enough “woman in jeopardy” storylines on soaps to know that they often involve the heroine in question weeping or cowering in a corner. That’s definitely not the case here. 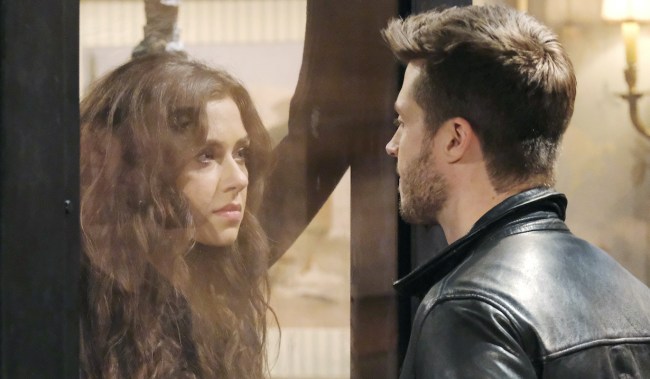 “How many times do I have to tell you, dude: I don’t do windows!”

Yes, Ciara is still waiting to be rescued by a man, but in the meantime, she’s not putting up with anyone’s crap. She barely flinched when Rhodes was shot, then got right up against that blood-stained glass during her scenes with Evan. Ever since, she’s been practically taunting her captor, making it clear she’s not in the least bit afraid of him or worried about how this will end.

What’s cool about that is that by playing against the expected dynamic, it makes this much more about the romance than the suspense. And that works, because none of us actually believe that Ciara is going to die. Of course Ben is going to eventually ride to her rescue… otherwise, what’s the point? So why bother reducing a strong female character to a stereotypical victim when you can instead let her show exactly the qualities the audience has always loved in her?

Since we’re on the topic of strong women, let’s talk about Gabi for a moment, shall we? Like Ciara, Gabi is a no-holds-barred kinda gal. But while the cloth these two are cut from may be similar, their patterns are distinctly different. In Gabi’s case, the biggest weapon in her arsenal is her confidence. She walks into every single room as if she owns it. We know she’s got some major insecurity going on under those flashy outfits, but she does her best never to let others see it. 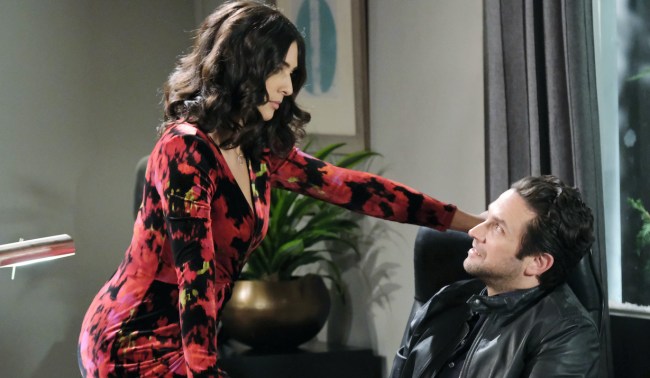 The other thing I really love about Gabi is that she’s one of those characters who speak their minds… usually without thinking. For example, while talking about Jake with Philip — whom she hoped would become her new business partner — there was this priceless moment…

GABI: He’s made it very clear he chooses Kate. God knows why, I mean, the woman is twice his age, she’s narcissistic, she’s selfish…

It does, however, amuse me that the success or failure of Gabi’s fashion empire seems to ride on whether one of two business conglomerates based in the tiny town of Salem back her. Forget New York, Milan, Paris, Los Angeles… Salem is where the action is at!

• Whoever came up with the “Sorry Charlie” promo — which you can see here — deserves a raise. Fast, fun, well-edited and with a great tagline? That’s how you sell a soap story. 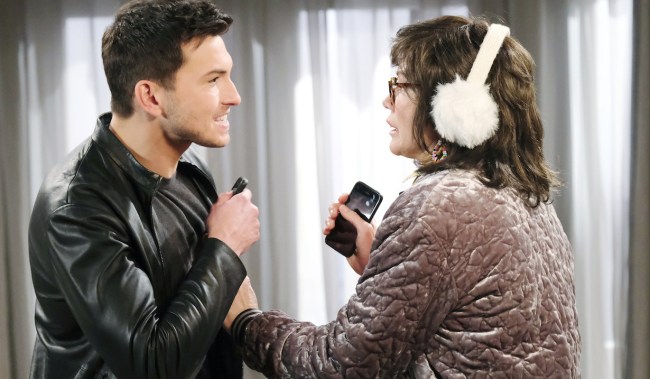 “Susan, I need you to stop acting crazy and prove that my dead wife is communicating to me via fortune cookies and dreams!”

• I’ve said it before, I’ll say it again: I don’t get Kristen’s plan. Nothing about it makes sense to me. Sure, she gets to be near Brady, but how long until he says, “Ugh, enough, get this crazy lady away from me!” I love me some Stacy Haiduk, but this story has my finger hovering above that fast-forward button. It was, however, fun watching Kristen-as-Susan try and fake her way through “channeling” information about Ciara for Ben.

• It always amuses me when soap couples begin planning an event — usually a wedding, but in this case, the christening of Jules and Carver — and say things like, “Oh my gosh, the guest list is already 200 people! How will we pull this off?” We all know that when the festivities begin, there will be, like, six, eight people tops in attendance.

Now that we’re all caught up, it’s time to hit the comments with your theories as to who might have murdered Charlie. We all agree it definitely wasn’t Sami, despite that whole standing-over-the-body-with-a-gun thing… right? Take a look at this gallery of suspects, then let me know who you think really pulled the trigger! 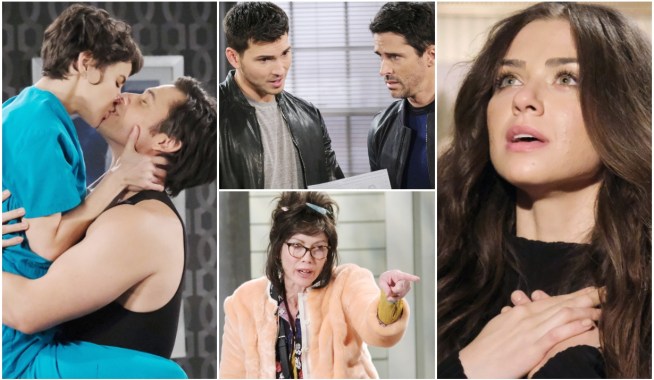 Days of Our Lives' Ciara Shocker Changed Everything — Plus, the Tag-Team We Never Saw Coming

Days of Our Lives Fans Defend Ciara, Marlena and Other Strong Salem Women — Plus, If Sami Didn’t Kill Charlie, Who Did? 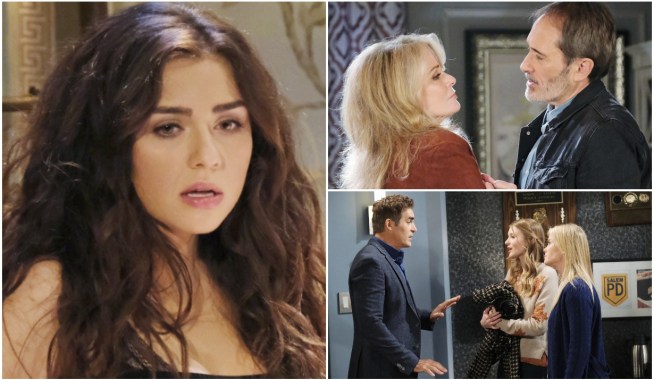