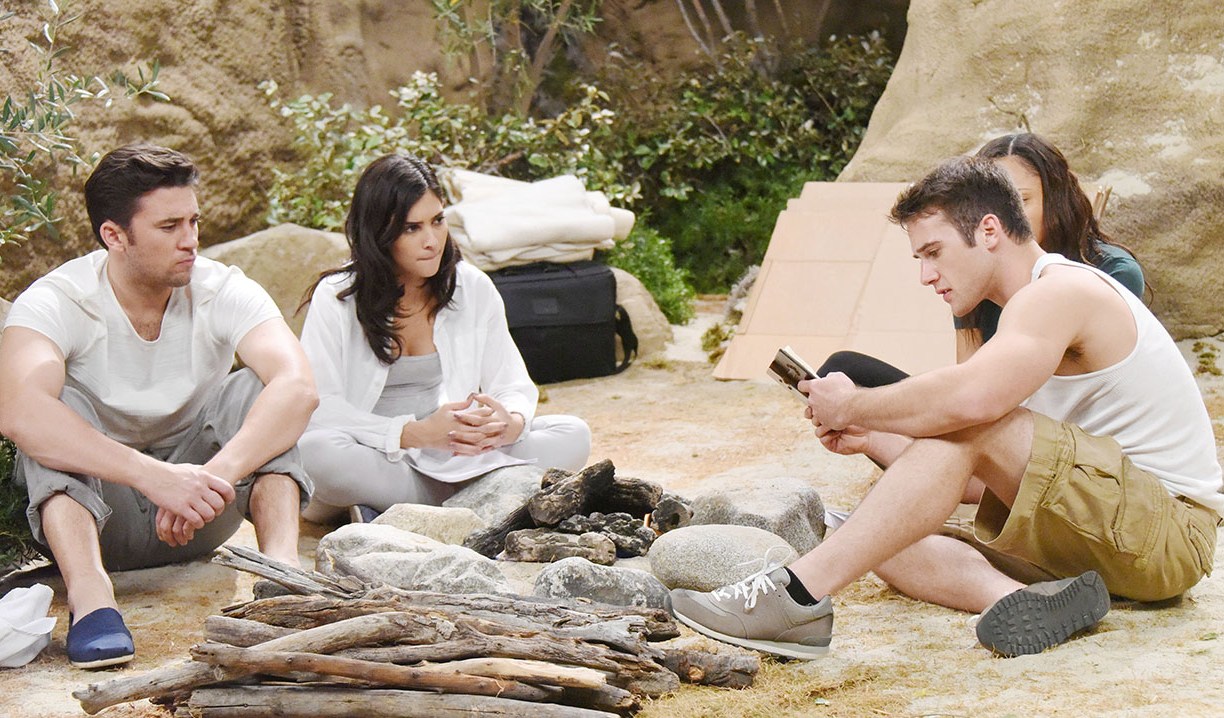 The magical baby.
Brady’s been dying for what feels like an eternity, but this week, no thanks to his anti-rejection drugs or science but thanks to a baby, he’ll live. Good thing because nobody bothered to mention Brady was cashing in his chips to Belle or Sami. Though John and Brady’s scenes were really well written and poignantly acted, we all knew Brady wasn’t going to die, so it was easy to slip out an eyeroll or two, especially when they were trying to turn him into a saint and ruin him like they did with Daniel. Enough of the stories of people near death, enough with killing somebody off each year, just give us real normal family drama that we can invest in.

And the thing is, I don’t even hate bricole, in theory, but they did not receive the epic love story #Days is pretending they did.

Castaways.
The castaways all got together and decided to wear their whitest ensembles, which haven’t gotten a spot of dirt on them. They look and act as though they’re vacationing in the Hamptons.

Always on the back burner…
Though I’ve mentioned I like Adrienne with Lucas or Justin, in the May 19 blog, Deconstructing DOOL, I found Lucas and Adrienne discussing intimacy after her double mastectomy to be endearing and romantic, but I had concerns that they wouldn’t be seen for weeks on end, thus delaying anyone’s investment in them. It’s been weeks and after seeing them together this week in bed at Salem Inn, where as stated in the previous blog, Deconstructing DOOL: Salemites have a fetish about staying at Salem Inn, I just couldn’t care less. Thanks “Days.” At least we’ve a new story coming with Sebastian Howard of Snowglobe Inc. buying out the Spectator’s loan. Maybe Ron Carlivati can do something with it.

Too little too late.
Feisty Maggie had it out with Deimos, finally, telling her brother-in-law that he wasn’t worthy to kiss the bottom of Brady’s shoes, but all I could do was mumble under my breath for her to shut her pie hole. And I like Maggie, but she had months to yell at Deimos for putting her in a wheelchair, and she delayed it so long that it lost the shock value and made me side with Deimos of all people. At least she had some good lines, but July can’t come soon enough.

@SheKnowsDOOL Shut up Maggie if Brady didn’t have St. Daniel’s heart you could care less about him — Erica Johnson (@ElaErica) May 30, 2017

Somebody left out the best part of the entire storyline! Again!
As usual it was telling vs showing on Tuesday’s episode when one of the biggest bits of drama to happen on the show this year happened off-screen. According to Justin, Victor called a meeting of the board and in a unanimous vote had Deimos removed as CEO of Titan, kicked out of the house and appointed Sonny as CEO. PhillyK would never have agreed to this and he’s on the board. If Victor was able to do this, why did he wait so long? And what was his reason for doing it at all? Why did the other board members go along with it? Blaming Deimos for Xander shooting Brady? Knowing Victor as we do, shouldn’t he be blasting Nicole, blaming her? That’s more his style. At this point, Xander should be able to go free, what with everyone blaming everyone else for the crimes he committed.

Let’s play devil’s advocate, which is easy to do with this show under the current head writer. Victor put his own brother in prison for 30 years for no good reason at all. Who would forgive that? It’s the least Deimos could do to hurt the woman his brother loved most and to steal his fortune and home. An eye for an eye is how Victor has lived his own life. Deimos is a victim, a survivor, albeit one they should have written better – but alas, should have, could have, would have… all pointless.

This only an opinion piece based on Monday to Thursday’s episodes. I’d love to hear from you so please share your own opinions in the comments!

Maggie to Deimos, “There’s nothing inside you but a black hole.”

Maggie to Deimos, “You are not worthy to kiss the bottom of Brady’s shoe.”