Sexy Secrets, an Overdue Slap and a Not-So-Shocking Return Made for an Uneven Week in Salem 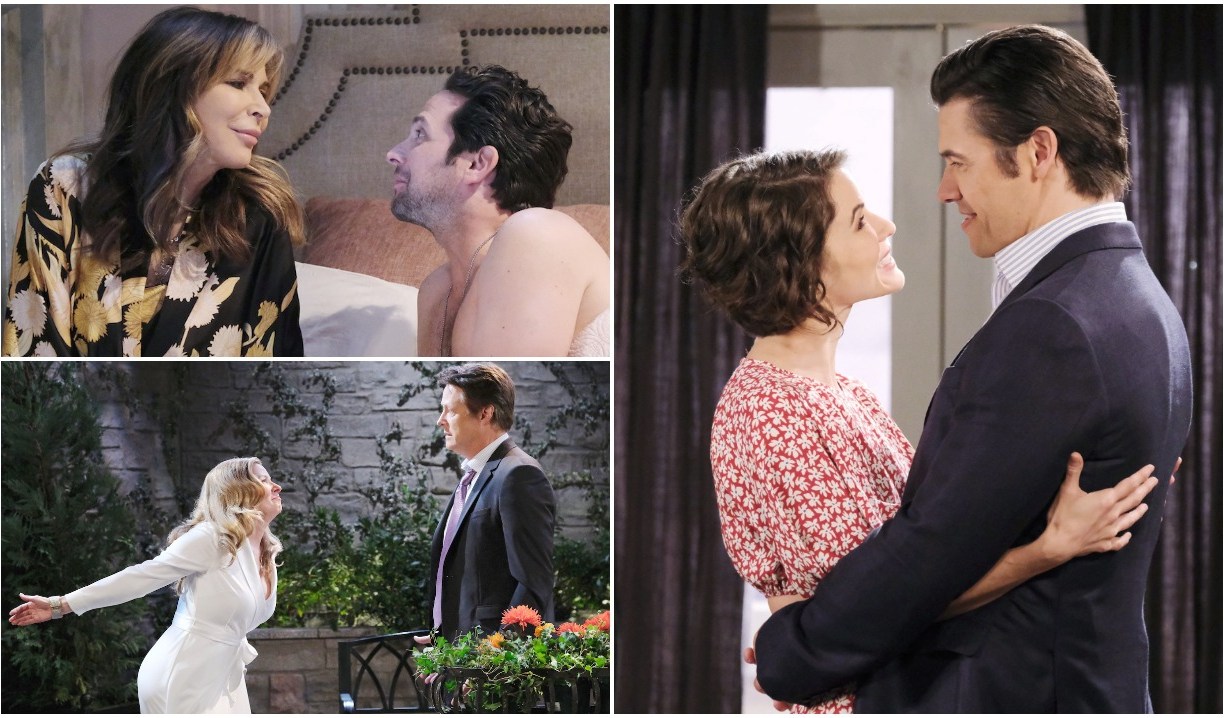 Things got off to a slow start this week as Days of Our Lives‘ Jack and Kate explained — in excruciating detail — how they wound up in bed together. But once we got that pesky (and pretty unnecessary) exposition out of the way, things picked up dramatically. Ready to unpack this week’s highs and lows? Read on, my friends!

Rules Are Meant to Be Broken

“Show us, don’t tell us.” That’s long been my mantra when it comes to the way things should unfold on soaps. It’s difficult for us to get invested in something that we didn’t actually see for ourselves. Claire might have gotten weepy describing to Theo the beautiful memorial service held for Ciara, but that only served to annoy viewers since we weren’t actually invited to attend.

That said, I’m about to prove that there are exceptions to every rule: I just don’t think we needed to see and hear the details about Jack and Kate’s one-night stand. Yes, Jack had to explain his actions to Jennifer, and it was interesting hearing Kate’s side as she talked to Jake. Unfortunately, the script — coming on the heels of Friday’s incredibly fun build-up to the reveal — fell flatter than the proverbial pancake. Worse, instead of it all leading up to the slap we knew was coming (thanks to the promos), Monday ended with Jack asking Jennifer’s forgiveness. 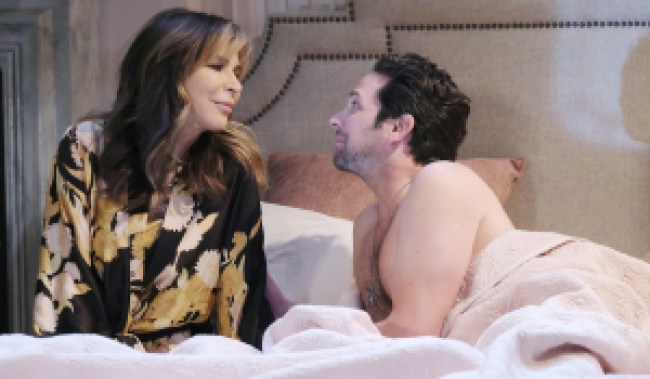 “This can never happen again… after we do it 12 more times.”

Monday’s episode also somehow failed to sell the idea of Jake and Kate falling into bed together. Yet Tuesday’s proved what a difference a day (and a solid script) can make, magically fixing everything. Jennifer finally delivered the much-ballyhooed slap, after which Jack had the nerve to turn around and blame Abigail for what had gone down.

Meanwhile, in Kate’s bedroom, she and Jake had a witty, intelligent conversation about why they shouldn’t have sex (including what she called the “significant age difference” between them) before doing exactly that. This was followed up by the obligatory “We can’t ever do that again” conversation, after which, of course, they did that again.

The Jake/Kate pairing probably shouldn’t work, but Lauren Koslow and Brandon Barash had me eating out of their hands. As I said on Twitter, Barash is so charming in this role that he has chemistry with everything and everyone. If he started whispering sweet nothings to the bedside lamp, I’d ship them. He’s just that dang charismatic.

For Her Next Trick…

The audience seems a little disappointed in the fallout from the party, and I suspect that’s because it ultimately didn’t get us any closer to understanding Gwen’s agenda. On the plus side, the manipulative minx immediately began weaving another web, and I could watch Emily O’Brien gleefully romp about the mansion verbally sparring with Jake or rolling her eyes at Abigail’s naiveté all day. However, the modern soap audience isn’t quite as patient as I am, and already people are demanding that the show “get on with it” and reveal her connection to Abigail.

I’ve had indigestion that lasted longer than Theo’s visit. As spoilers in the Charlie/Claire relationship go, that wasn’t much of a speed bump… although I’m pretty sure we’ll be seeing more of Theo down the road. Otherwise, his visit was as pointless as it was unnecessary, given that you could edit out the scenes in which he appeared and there would be no impact on the overall canvas.

Meanwhile, this was a good week for both Charlie fans and Xander/Sarah shippers. Yes, I’m fully aware that the world is expecting it to be revealed that Charlie raped Allie in London. I’m holding out hope right up until the truth comes out because Mike Manning is too awesome a find to waste (and it’ll be really, really hard for me or many others in the audience to accept him with Claire if he really did take advantage of Allie).

More: Charlie’s portrayer is braced for the worst 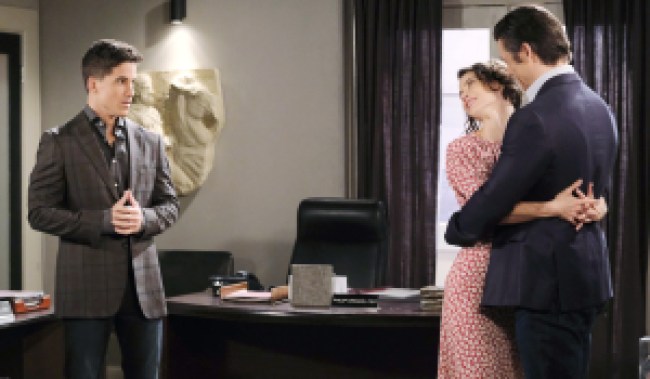 “Charlie, I’m pretty sure when Xander said he’d teach you the ways of love, he didn’t mean you could watch us make out.”

I’ve long been a sucker for “you and me against the world” type stories, so having Sarah and Xander work to bust Philip (all the while pretending to be at odds) checks a lot of boxes for me. Meanwhile, I’m sure that somewhere in Peoria, a viewer was shocked when the show revealed that Ava is the one pulling Philip’s strings, but for the rest of us, it was one of those things that suffered from being revealed in advance. One of the reasons that General Hospital is so incredibly watchable right now is that it’s learned the fine art of the tease. You may think you know where things are going, and you might be right… but the promo department isn’t putting out ads confirming it for you.

That said, I’m ecstatic to have Tamara Braun back on screen. Yes, I hate back from the dead stories with a passion, but sometimes, you just have to look for the rose among the thorns. Philip getting in over his head with gambling debts, thus opening the door to Ava’s manipulation, makes perfect sense. The two of them hanging out in the park chatting despite her being a wanted women and both wanting to keep their relationship a secret? Not so much. Why does everyone in Salem seem to think they can take secret meetings in that very public — and well-trafficked — space?

People eavesdropping has long been a soap staple. As one scribe told me years ago, “If people didn’t overhear secrets, how would stories ever move forward?” While I’d happily suggest about 10 other ways in which that can be accomplished, there’s no debating that for years, people talking aloud to themselves in empty rooms has been as closely associated with Days of Our Lives as the Brady and Horton clans.

Whereas on other soaps, a character might pick something up and muse aloud, “What the heck is this doing here?” Salem residents have entire monologues with inanimate objects. When conversations are overheard on other shows, it’s because two people were talking about something they probably shouldn’t have whereas on Days of Our Lives, the chat is probably being had between a person and a portrait, or perhaps their glass of bourbon. (Yes, Gwen, I’m lookin’ at you, the current record holder when it comes to outwardly-expressed private thoughts being overheard.)

• I’ll admit that if you’d asked, I would have said Belle and Shawn are married. I mean, why wouldn’t they be? But with Jan ready to stir up trouble for the couple and their fast-tracked ceremony, I’m actually more excited about this wedding than I was about the Jack/Jennifer party.

• Speaking of Jan, don’t think I wasn’t watching when she gave that ginormous “healing crystal” to Claire. I said it weeks ago, and I stand by it now: That thing is a murder weapon waiting to be used.

• It was somewhat surprising how little of this week’s action centered on the Allie/Tripp story, given that last week’s DNA-test results has set the stage for canvas-wide drama. But man, the guy really needs some sense slapped into him. The second he found out charges weren’t being filed against him, where did he go? Straight to Allie’s apartment! Is he a glutton for punishment or just plain dumb?

Before hitting the comments to share your thoughts on this week’s action, why not click here to take a walk down Memory Lane with our photopalooza celebrating the 55th anniversary of Days of Our Lives? 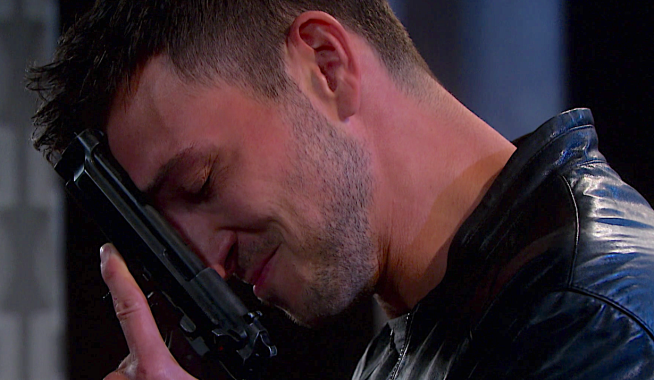 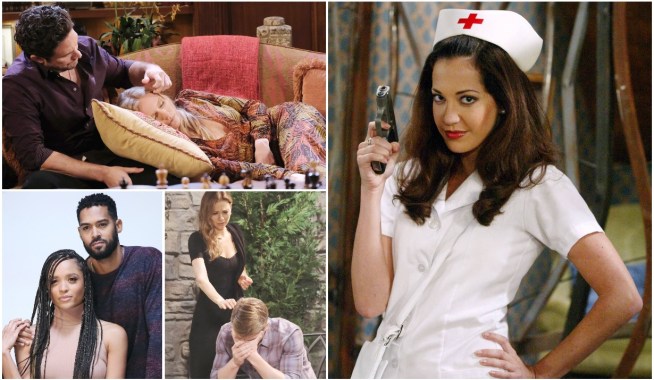