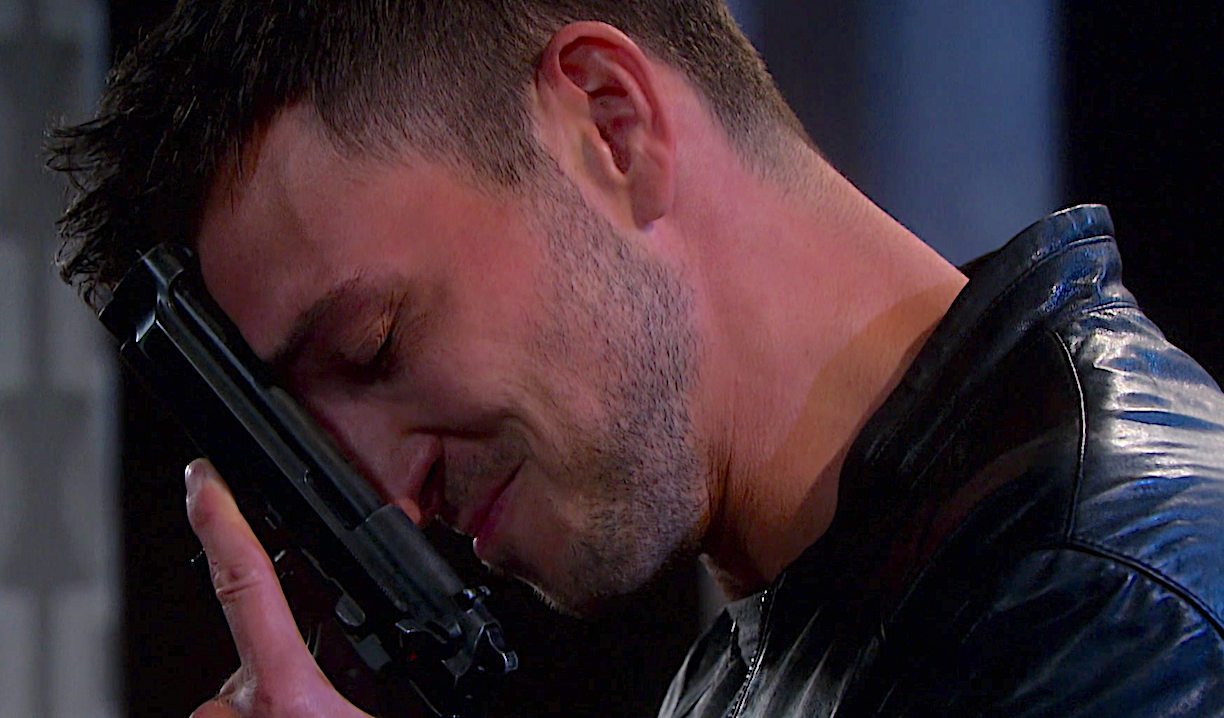 If you fell asleep when the lights went out in Salem, it’s understandable. Sadly, because the storyline was created specifically to fill a two-week gap left in Days of Our Lives‘ schedule by the cancellation of the Summer Olympics, it was destined to have no real heft or consequence. Before we get back to the stories that already were in progress before the jailbreak, let’s talk about the hits and misses of last week’s episodes.

We Interrupt Your Regularly Scheduled Programming…

The biggest problem with the jailbreak story was that from the beginning, there were no actual stakes. There literally couldn’t be, as the story was designed to fit neatly into an already unfolding narrative. This meant that the writers couldn’t, for example, have John take a bullet while riding to Marlena’s rescue. Why? Because that would have impacted weeks’ worth of story which had already been written long before the jailbreak was conceived. Anything that headwriter Ron Carlivati and his team came up with to fill the Olympics-sized void had to be, in essence, self-contained in order not to impact future story.

More: Did we just locate Ciara? 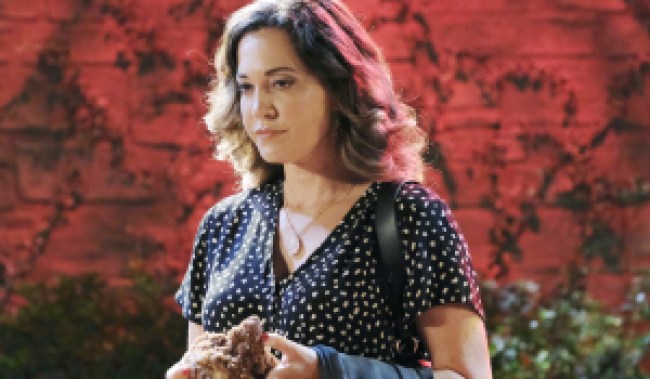 Much like Charlie Brown, Jan found herself muttering, “I got a rock” this Halloween.

A while back, I speculated that Days of Our Lives would fill the two-week gap with a story built around Jan’s murder. In hindsight, that wouldn’t have worked because of the ripple effect such a tale would have had on the canvas long after the mystery was solved. That said, I still believe Jan will wind up dead (perhaps during November sweeps?). And if that ginormous “healing crystal” she fantasized about knocking Belle out with isn’t the murder weapon, I’ll… well, write another column in which I have to admit my predictions were wrong.

Having three prisoners on the loose allowed the show to craft numerous stories, all of which had to be loosely tied together in some fashion. Interestingly, it only just occurred to me — as I write this — that the connective link was fatherhood. Clyde and Orpheus each hoped to help their sons, and Rolf essentially wanted to play daddy to a Stefano clone. More on that particular story in a moment…

Why, exactly, Clyde agreed to kidnap an innocent child — which he sort of had to know Orpheus was essentially threatening to kill — I never quite understood, but it was sort of adorable that Ben’s dad thought he might be able to use Henry to cheer up his grieving son. Apparently, Clyde’s inner dialogue went a little something like this: “Look, I know you wanna kill the man who murdered your wife, but I guarantee you, the smell of a baby’s head will knock that notion clean outta your skull.” I’m also gonna give Clyde points for offering to kill Vincent on Ben’s behalf. I mean, I can’t even get my dad to let me play with one of his remote-control airplanes, and there’s Clyde, ready to commit murder for Ben.

More: Recast Marlena? Don’t even think about it

The scenes between Orpheus and Marlena contained some great history-referencing dialogue, especially for longtime viewers, and Allie bonding with her baby as a result of him being kidnapped worked nicely. I also really loved seeing Kate and Nicole — who share a contentious-at-best history — sitting on the couch throwing back martinis while contemplating the possibility of maybe possibly becoming, if not friends, at least frenemies. But when it comes to the story that was most likely to have people buzzing, well… read on.

You Want to Put What Where?

Cloning Stefano is not an idea that’s all that out-there, at least not when it comes to this show. Heck, a few days before Rolf announced his latest plan to resurrect the object of his obsession, we suggested as much (as well as who could play the newly-risen Phoenix). But the idea that of all the women on the planet — or even within the narrower confines of Salem’s city limits — Kayla might be the best possible incubator was ludicrous at best. 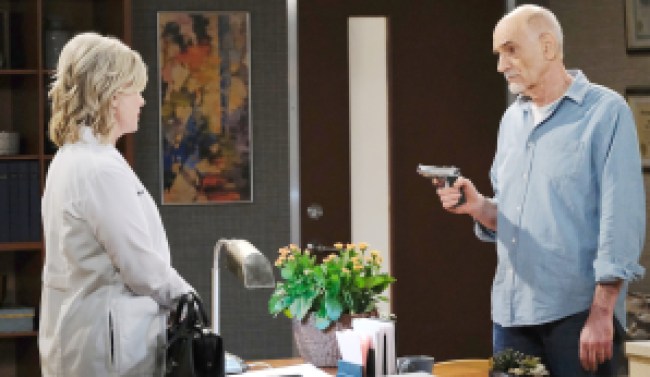 “Truth be told, I may not have thought this all the way through… ”

“Clearly, your field isn’t gynecology,” the sane doc told the mad scientist, “because I’m a little old for what you’re proposing!” Rolf acknowledged that “conventional science casts doubts on the viability of your womb” before saying that he wasn’t “bound by their ignorance.” But why, one might wonder, take the chance on a past-its-expiration-date womb — let alone one belonging to a woman whose extended family is basically comprised of superheroes — rather than someone younger without so many pesky attachments?

But of course, as evidenced by the fact that Kayla was kidnapped on Tuesday and rescued on Thursday, this wasn’t a plot designed to be looked at too closely. Rather, it was, like the rest of the tales unfolding during the blackout, filler. On the plus side, the writers again managed to find a nugget of emotional truth in the fallout, with being held against her will reminding Kayla of her long-ago rape, which will continue to influence her actions as the Allie/Tripp story moves forward. Soaps are at their absolute best when rather than forget a character’s history, they use it.

The fact that Steve’s wife was raped by his own brother would be easy to sweep under the rug and never mention again, especially given that Jack has since become one of Salem’s good guys (all things being relative). While the three of them have made peace with the past and moved on, the show has never forgotten that this ugly chapter is a part of Kayla’s story. Suddenly, what was a downright ridiculous plot took on new gravity as Mary Beth Evans, her hands shaking, let us see how Rolf’s actions had impacted Kayla. “The arrogance and pleasure he took out of scaring me,” the traumatized doctor whispered to Steve.

And that, kids, is how you make even the most outlandish soap story relatable.

• After watching Lauren Koslow and James Read positively sizzle — right up until the moment Kate shot Clyde (while she was holding a baby, no less!) — I couldn’t help wishing Ben’s dad had come back a free man, ready to dive into a romance. But that’s OK, because I hear there’s juicy stuff ahead for Kate. (For more on that, make sure to check out our November Sweeps Preview on Monday morning!)

• Hope refusing to believe her daughter is truly dead and heading off to search for Ciara was a smart way of explaining the character’s absence. However, it could also create some serious problems down the road. If Ciara is alive and eventually returns to Salem — whether played by Victoria Konefal or another actress — what does that mean for her mom? Would the show actually recast Hope? (We’ve contemplated that very idea, to the point of imagining other actresses who could try to tackle the part.) Or would they need to do something extreme, such as have the character experience an off-camera death?

• Abby saying that Gwen is the “she’s the closest thing to a best friend that I have had in a very, very long time” is one of the saddest things ever. How does Abby not have friends? I mean, she doesn’t, but how is that even possible? We need to set up a coffee date for her and Lani. Much as we love the cop’s friendship with Kristen, Lani could probably use someone to hang with when her bestie is behind bars or on the run, which happens an awful lot.

• It probably shouldn’t surprise me how easily Cady McClain slid into the role of Jennifer — the actress has, after all, been a daytime staple for decades — but it did. McClain’s Jen seems to have a bit more of an edge, which I expect will prove useful during the big story that’s about to blow up the character’s world.

Now that the show is back on track and ready to pick up the storylines which were pushed aside by the blackout, which plot are you most excited to return to? Swing by the comments to share your thoughts on the week that was and the week we’re heading into, then check out our photo-packed gallery in which we rank the best Days of Our Lives characters of all time.

Chad, Abby, Gwen and Rolf Made the...

Sexy Secrets, an Overdue Slap and a...