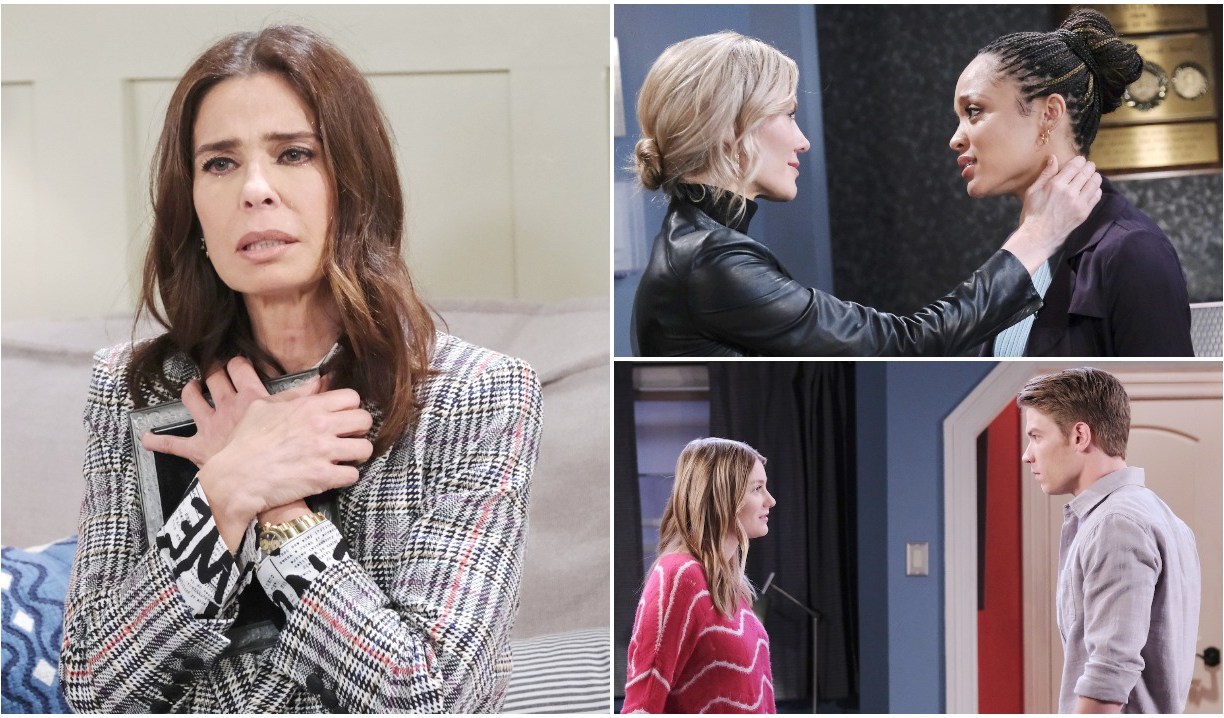 It was another short week for Days of Our Lives thanks to pre-emptions, but the show did its darnedest to make sure we had a lot to talk about in this week’s column. From a newbie who seems to be headed down a disastrous path to a longtime couple at a crossroads, there’s a lot to unpack. So grab a cocktail — it’s 5 p.m. somewhere — and let’s dive right in.

Okay, so I put this off as long as possible. In last week’s column, I focused on other things because I wanted to let the Allie/Tripp story unfold a bit before we dove in. Rape is never an easy topic to discuss and, frankly, daytime has a downright horrific record when it comes to stories of sexual assault. Far too often, the tale is clumsily (at best) or insensitively (at worst) handled, which is especially problematic, given that soaps are aimed at a largely female audience.

Combine that with the fact that Salem is currently home to several former rapists who have since become romantic leads — not to mention a serial killer who followed a similar trajectory — and it’s easy to understand why some audience members were wary about Days of Our Lives going down this road again. While there are some who say it’s simply not a subject that should be tackled at all by entertainment-based programming, that’s a discussion to be had another day. What we’re here to look at is how this particular story is playing out, something we’ll continue to examine in the weeks ahead. 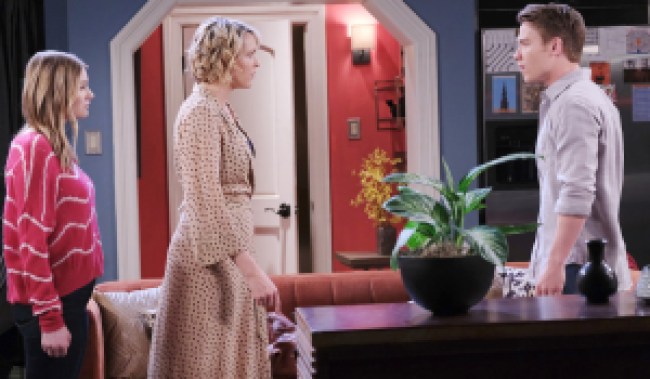 It’s important to point out that this is an opinion-based column, and not everyone is going to agree with my thoughts… which is exactly as it should be. That’s one of the reasons comments sections and message boards and pieces written on the same topic by other staffers exist, so that a multitude of voices can be heard. But for my money, headwriter Ron Carlivati and his team have so far done a pretty good job with this difficult material. Having Nicole play a central role as Allie’s confidante has been surprisingly effective. She’s been supportive of Allie at every turn, even when faced with the difficult task of asking probing questions which, if handled incorrectly, could lead the younger woman to feel shamed or accused. While there’s no doubt that Sami will eventually show up and make things infinitely worse — as is her way — Nicole has stepped into the surrogate-mom role with surprising ease.

Putting Steve and Kayla at odds over the situation — with him upset at her having the audacity to question Tripp’s innocence, and her having to point out the young man’s past actions — is a nice way of creating drama within a relationship. Although as yet there’s no sign they’re heading in this direction, it also would have been a great opportunity for Kayla to reconnect with Justin. Their tie was severed so quickly, it would be easy to play the unresolved issues (and feelings) lingering within them.

If there’s one thing about this story that troubles me, it’s Charlie. Now, for all we know, the charming, bumbling new intern might be every bit as adorable and innocent as he appears. But like a vast majority of the audience, I can’t help thinking his arrival on the scene at this particular moment in time is less than coincidental. Tripp has repeatedly mentioned leaving his name and number on Allie’s bedside, and every time she claims never to have seen it, I think to myself, “Search Charlie’s pockets!”

The thing is, I really, really don’t want Charlie to be Allie’s rapist. Like, I want that less than I want broccoli to replace French fries as a side dish with any given meal. Because portrayer Mike C. Manning is exactly what the soap needs right now… a new character who is funny and appealing, played by an actor who shared an instant spark with Isabel Durant (Claire). This pairing shouldn’t work, because it’s two newbies, and generally speaking, that’s the kiss of death. But geez, did these two instantly pop! 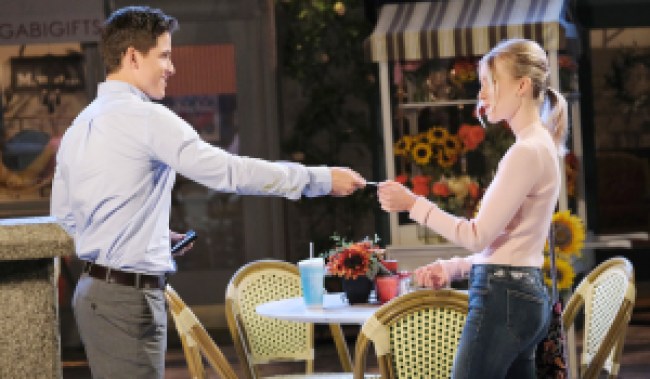 Yes, it would be a big, dramatic (if, as proven by audience speculation, predictable) twist for Claire to find out her new guy raped her cousin. But that would leave the show with two options: figure out a way to “redeem” Charlie for his actions or write the character off. And frankly, I’m not too thrilled about either prospect. So instead, I’m going to hold out hope that all of us — yes, including me and you — are wrong about Charlie and he really is the good guy that we want him to be.

As we get ever closer to the departure of Kristian Alfonso and her literally iconic alter ego, Hope, it’s hard not to be frustrated by the story which we now know will be her final one. It’s equally frustrating to realize just how much big story could be played were she sticking around. For example, as was pointed out by both fans and Alfonso, why isn’t Hope lashing out at Ben instead of working with him? Imagine a scenario in which Hope blamed Ben for Ciara’s death (after all, his past actions put her directly in Vincent’s path).

The show could play the rift between the grieving mother and her equally distraught son-in-law for months, with Hope determined to make him pay. This would beautifully set up a whole new conflict when Ciara returned (whether played by Victoria Konefal or a recast) to find that the two most important people in her life were once again at odds. Ben, thrilled to have his wife back, would want to reunite immediately. Hope, however, would beg her daughter to reconsider, now more convinced than ever that no matter how much Ben had changed, he couldn’t escape the sins of his past. How far would Hope go to keep them apart? Talk about a potentially epic story which would put Ben and Ciara back on the path toward a reunion while creating an obstacle to their happiness at the exact same time. 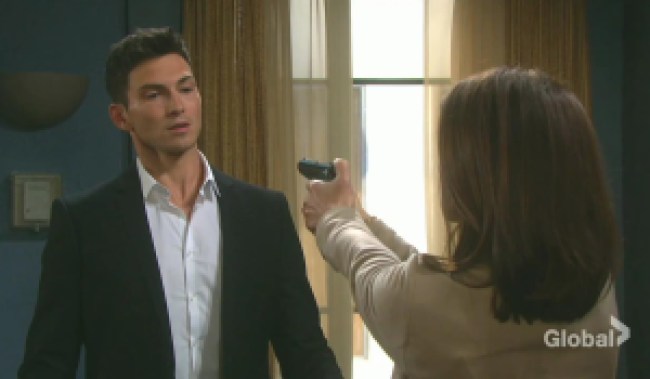 Meanwhile, soaps need to realize that today’s audience — raised on decades of smart shows like Law & Order — are pretty savvy when it comes to the ways of the criminal-justice system. Sure, Eli got Kristen’s confession on tape, but any good lawyer (heck, probably a bad one, too) could get that dismissed, given that he didn’t have her permission to tape the conversation. Likewise, anyone who took Basic Law 101 would know that Kristen’s attorney could easily get Melinda Trask booted from the case, seeing as she’s clearly got a personal vendetta against the woman she blames for daughter Haley’s death.

On the plus side, the show has managed to find a way to create problems between Eli and Lani — thus keeping them front and center — in a way that makes sense for them as people. OK, sure, it’s a little insane that Lani would put her friendship with Kristen above her new husband and their twins. And Eli has to know that plotting to put his wife’s gal pal behind bars — even if it is to keep Lani out of trouble — will definitely rock the marital boat. But it’s good, soapy drama, and I’m here for it.

• How in the world did Allie not know that Ciara was dead? Is the Internet connection so bad in Eric and Nicole’s apartment that she has no access to the outside world? 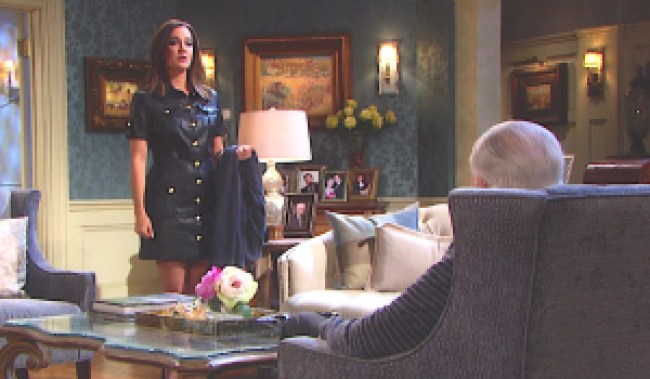 We’d be willing to bet Jan has a whip that goes with this outfit!

• Jan Spears may be nuttier than the proverbial fruitcake, but her fashion sense is definitely on point. That outfit she wore during her chat with Victor? I hesitate to use the word “killer” where she’s concerned, but…

• I don’t know why, but I’m a total sucker for scenes in which a character (in this case Philip) picks up a phone and whispers to the person on the other end about how their plan is working perfectly. I instantly want to know who the mystery person is… even when I’m pretty sure I already know.

Now it’s your turn. What worked — and didn’t — as far as you’re concerned over this past week? What are you looking forward to most next week? Share your thoughts in the comments, then peruse the gallery below as we count down Days of Our Lives‘ 35 most memorable characters ever. Find out who landed at No. 1 and where your favorite fell… assuming they made the cut! 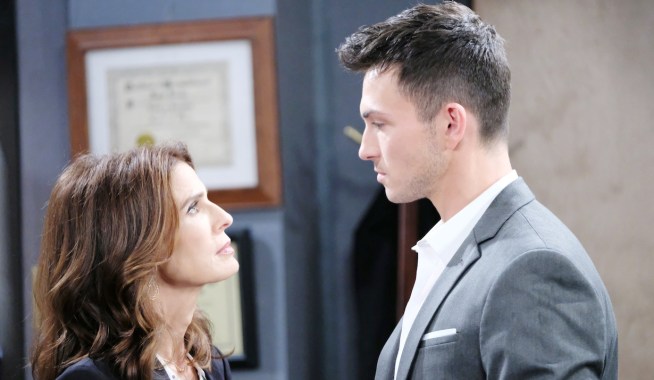 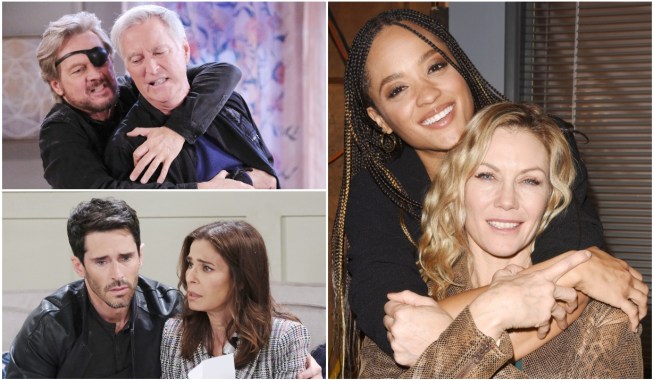