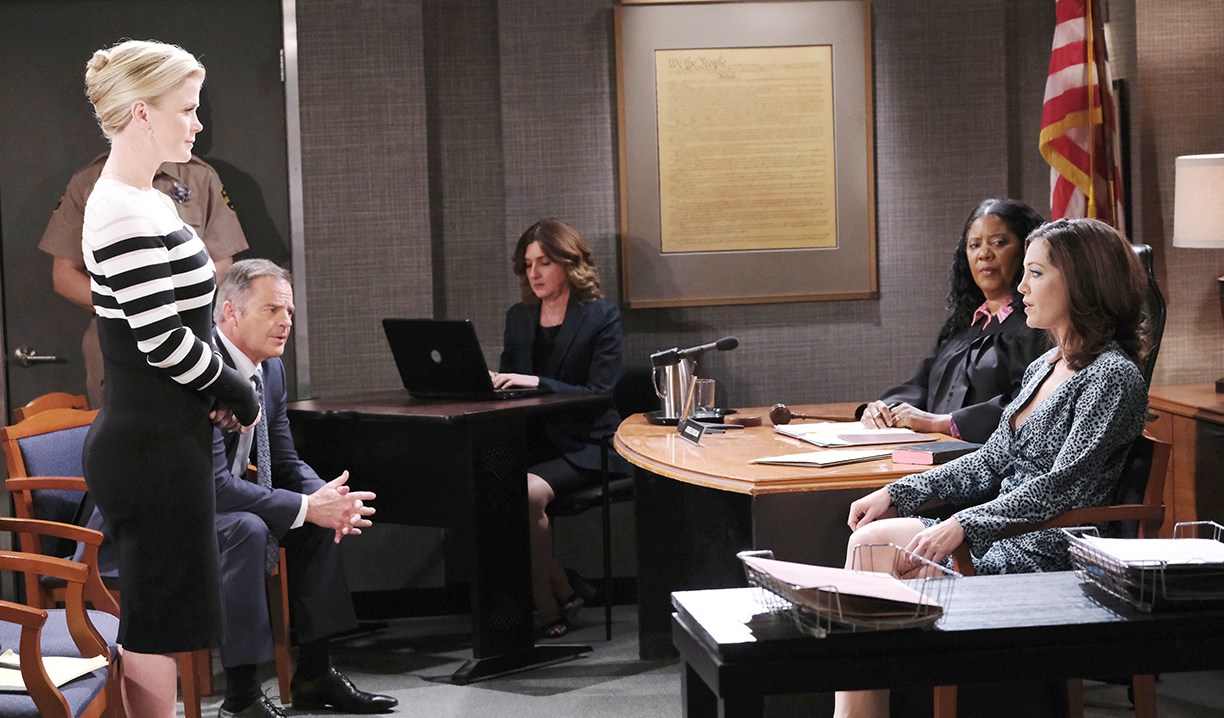 The mishandled court case finally ended and not many were satisfied with Judge Duncan’s decision, which seemed to be baseless, while the neverending plot to showcase Ben Weston in a good light went on…and on…and on, just when we hoped it would end already.

It’s either entertaining or annoying

Why Eric and Nicole used Justin Kiriakis as their lawyer is beyond me and how sad for everyone that Judge Duncan is as bad of a judge as Justin is as a lawyer!

Justin had the audacity to say that attempted murder had no bearing on a child custody case. Yeah. Let that sink in. And if that doesn’t make your head spin, don’t forget that Justin wants to win this case so badly that he doesn’t care that Nicole tried to off his uncle, whether it was now or 25 years ago.

We already established last week that there were no background checks done on Nicole, Eric, or Sami, and this week we learned that Judge Duncan didn’t care about the law altogether. She was thoroughly entertained by Sami’s soap opera, the way my mama is when she misses an episode of Days and I update her. Duncan didn’t listen much to Victor’s testimony and she kept telling Nicole to shut up for calling Sami names, only because she was so engrossed in letting Sami run her court. I found it ridiculous and hilarious but most viewers found it mind-bogglingly annoying. Rightly so! Many were angry that Nicole didn’t get to sling some dirt Sami’s way. And that Justin had every opportunity to use the information he knows about Sami kidnapping Belle and trying to sell her on the black market but didn’t! Why not!

The biggest ball of confusion thrown our way was Jan Spears’ decade-old diary being entered into evidence. Is an old diary really proof of anything? It could have been doctored! Only in Salem…

Sami leading the witness like no one ever has, but the judge so into the story she don’t even care anymore 😭😭 #Days

Give it a rest already

Soap operas need their messy characters, otherwise everyone in these fictional towns would be kind and loving which translates to boring. But sometimes they go overboard and force characters down our throats for whatever reason, which doesn’t always turn out well.

In 2018 the show wrote Eve and Brady into the ground and most viewers were pleading with the powers that be to get them off their screens. And they did for a while. But when they brought Eve back only to make her more hateful than her last few stints in Salem, many sighed, wishing that she had moved on from her bitterness so that she could be involved in other stories that didn’t involve politics or Paige’s death.

The show passed the ‘omg I’m so sick of you two’ torch on to Ben and Ciara, and in my humble opinion, of course, a once-hot couple with decent potential was ruined for many, because of the constant attempts, mostly through Ciara’s rose-coloured glasses, to convince us by way of Mary Poppins, that Ben is “practically perfect in every way.”

These repeated plots to show this protagonist trying to overcome his inner monster in ways that didn’t work for most viewers played themselves out too often. I’d love to see both characters rest for a few weeks and return with new storylines because none of which has played out onscreen so far has made Ben haters feel better about him. It’s just made him annoying to many who actually did like him. With the rating so low, the show can’t afford to keep alienating the majority of fans.

I’ve been enjoying Vincent’s time in Salem. He’s been intriguing, and vampire creepy and it turns out the reason behind his lust for brainwashing Ben didn’t really have much to do with whatever amount Eve paid him but with something far more interesting. In a surprising twist, we learned that Nurse Wendy Taylor was the love of Vincent’s life, and Ben ruined his life by murdering her – for no reason whatsoever. It was good for Ciara to listen to his story I guess because so far, though she loves Ben, her Wonder Boy’s murderous rampage hasn’t seemed to have affected her one way or the other, which is asinine. I’d love it if the reason she’s leaving is to take some space to figure out a few things. Who she is, and if she can stand to be with a man who tried to murder her. It’s another issue I’ve taken with Ciara, that in reality, she should have taken more time to struggle with her feelings over what Ben did. If she doesn’t this time, it’ll be a massively missed opportunity and will make me dislike her more.

Who else isn’t buying that Hope commiserating with Eve over Zack’s death for three minutes turned Eve’s bitterness around and made her squeal like a pig to the popo?

I went from not liking Jake at all to being heartbroken for him since Gabi lied and told him she was using him. But though I felt bad for him, and believe me, I’m no fan of Gwen’s, I admit I smirked when she busted a gut over him being dumped. He deserved her taunting since he did cheat on her!

Eli and Lani are the only cops left in the police department and both are crooked. It’s no surprise. They’re just carrying on the tradition, but could Eli have at least taken more than three seconds to decide that Kristen, a known rapist, attempted murderer, and kidnapper didn’t need to be caught? Ciara’s twentieth kidnapping is somehow more important than a woman who has a lifetime of criminal activities under her belt that almost makes Vincent’s little brainwashing and kidnapping operation look lame. I guess with just the two of them as cops, they can only work one case at a time…Oy! I guess Eli’s motto, ‘we are cops 24/7’ is out the window.

Sometimes you can’t help but cringe at our soaps

Ciara’s makeup was perfect while she was kidnapped, long after she sobbed the mascara off her lashes during Brainwashed Ben’s murder attempts.
Ciara’s dream sequence was embarrassingly lame except if you’re a stan of the couple.
Nu-Claire looks the part, can act the part, but is way too nice and sweet, making us wonder if she was given any direction in her role.
Nicole’s “caught in the rain” hairstyle needs a makeover.
Marlena’s two-second hypnosis that had Ben remembering what happened to Ciara after one minute was dumb.
Rafe left the country without appointing a commissioner to take his place. Yep.

Belle’s angry for Sami unleashing Jan on her.
Sami, “I wasn’t thinking of you.”
Lucas, “That much is clear.”

Xander headbutts Philip: “True to form. Once a thug, always a thug.”

Shawn D: “Damn it, Weston, I will beat the truth out of you.”

Eli, “We are cops 24/7, not just when it’s convenient.”
Lani, “If you arrest Kristen, Rachel won’t have a mother.”
Three seconds later, “I guess the department has bigger problems than Kristen anyway.”

Hating on Nicole and Am Team Sami...

Aren’t We Ready for Abigail to...