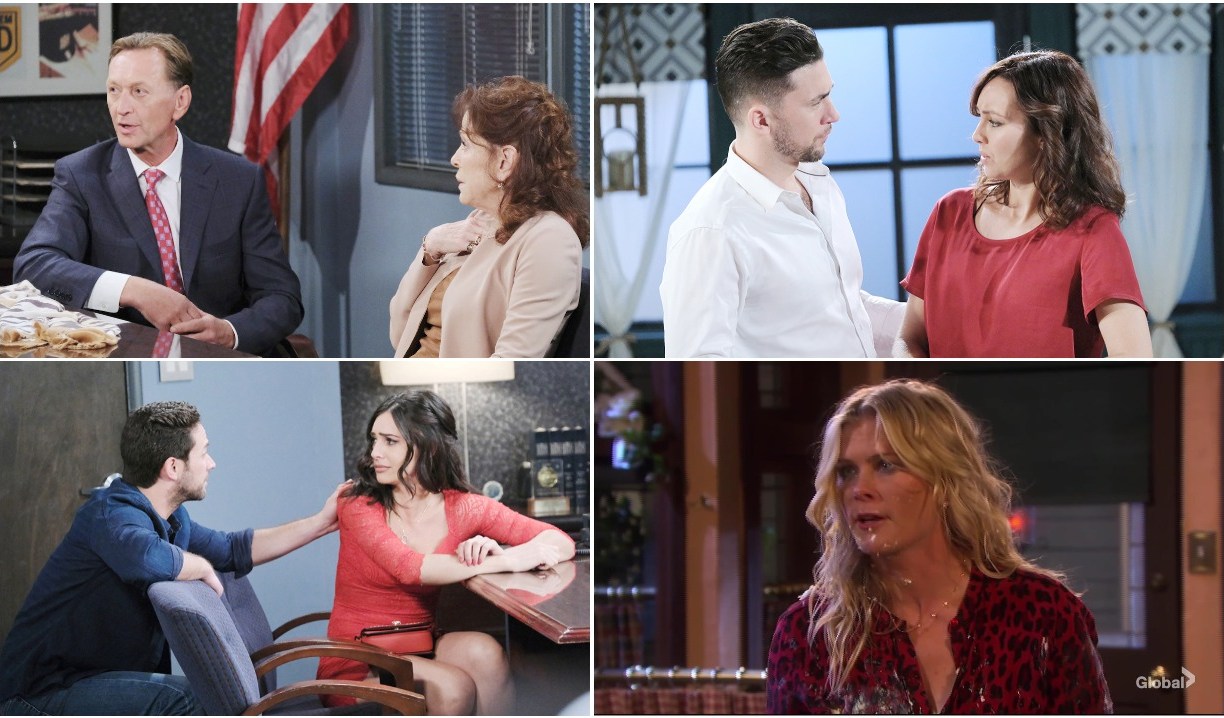 This is the third week I’ve felt that shift, that different tone on the show. It’s calmer somehow, that was, until Sami’s return, which made for a lot of soapy drama. Ivan’s appearance has sparked thoughts of him sticking around in a longterm role with Vivian – because, no I don’t believe she’s dead. This is Salem, after all. Plus, I can’t help but wonder what is going on with Chad…

Last time in my Days column, I was depressed that Bonnie was wearing “boring-assed conservative” clothing. Mostly I was worried they’d change her personality to suit the boring clothes and I like the weirdos on our show to stay weird. But Judi Evans didn’t disappoint, and soon, we had that fun shirtless Lucas fantasy, and Bonnie grabbing Jack’s arse to show him she wasn’t Adrienne. Hilarious! But I’m not altogether sure why they brought her back. It’s not like Lucas would forgive and forget, would he?

What’s going on with Chad?

Chad and Gwen commiserating over their hatred of Gabi was fun, to begin with, but Gwen’s drunken behaviour was more pathetic than anything, which sucked the fun out of it for me. After a while, both of them couldn’t have annoyed me more. I guess I am team Gabi against them. I love Emily O’Brien. She’s talented. I loved her as Jana on Young and the Restless but as Gwen? I’m still not sold on her. She creeps me out. She’s so intense. Her relationship with Jake seems to be the only thing in her life, which is sad – and it’s toxic. She has no job, no money, no home and a one-track mind in getting Jake back by forcing sex on him. I don’t get her, and I really don’t get Chad taking a perfect stranger, into his home – where his kids are. There must be more trouble with Abigail than he’s saying. Or maybe he’s still under Stevano’s spell. Who knows!

Hurricane Sami blew back into Salem

Nicole and Eric’s wedding snuck up on me. It really was moving to see Roman back on screen with Eric on his special day. Giving him that letter from Grandma Caroline was touching. The wedding itself was the first wedding at the pub. If you’re an Ericole fan then it was lovely and it all of the romantic moments. It’s a shame Nicole’s mama, Fay had to miss out, but how sweet was it watching Abe call Nicole his family? Thankfully, it went off without a hitch, well, until hurricane Sami blew back into town.

The rave – The classic overused trope of having somebody interrupting a wedding cropped up for the second wedding in the form of lovely, and very angry, Samantha Gene was very dramatic. I’m thrilled she’s back. And I am team Sami all the way, even though she ruined the reception. I’m not discounting anything Nicole said to Sami. Everything Nicole told her was the truth. But there’s a time and a place and though I think Nicole should have stayed out of it, she at least could have used some decorum. Sami was already hurting and as a mother, it was surprising that Nicole went after her. I say Nicole asked for the beat down and Sami delivered. Agree? Disagree? Vote in our Sami vs. Nicole poll.

This blow up over Allie being pregnant is making my head hurt. This is 2020. She didn’t commit grand larceny. She just got knocked up. #MakingMountainsOutOfMolehills #DAYS pic.twitter.com/V0d1Ickb8E

I’ll always be Team Sami no matter what she does lol… #days @Ali_Sweeney https://t.co/CeUdPl0bwi

Jake’s maybe growing on me?

Jake is finally starting to show us who he is. This week we learned he has dignity. He didn’t bone Gwen when she was blasted, and he offered Gabi comfort when she learned he’s not Stefan. I actually melted a little when he told her he finally understood her deranged actions. Crazy, right? And when he went to Ben for support after his world was turned upside down, I felt for him. Finally. Now if he can get away from that gold-digger, Gwen!

I love how the story played out with Jake assuming he was Stefan from the DNA test and Vivian not even knowing that she had twin boys, to Gabi’s devastation that Stefan isn’t coming back to her, and Ivan’s storytelling abilities. Ivan shone this week. He’s grown into his own man, he’s more confident and assertive. He looks good, too. A highlight. I would definitely be into it if he were to take over where Stefano left off, as a new Stefano so to speak. Of course, with Vivian dead in hiding, I’m not sure how that would work.

He tried to put a ring on it

Where did the ring Ben and Claire picked out for Ciara go? If Claire didn’t take it and Gwen’s not gaslighting Claire, could Eve be behind the shenanigans? We know Kassie DePaiva’s returning to Salem. I’m sure she wouldn’t want Ben to have happiness while her daughter is dead because of him.

That’s all I’ve got. Join in on the discussion with your take on this week in Salem.

Allie about Sami, “My life was a circus and she was the ringmaster.”

Ivan, “Stefano seduced Madame and left her after taking her ruby.”
Jake, “If that’s a euphemism for…”
Gabi, “Gross.”
Ivan continues, “It was a priceless gem.”

Vivian, “And you named him Jake?”
Ivan, “Madame, would I name anyone Jake?”
Jake, “What’s wrong with Jake?”
Lucas to Sami after the cake fight, “Hey Sami, you got a little cake here,” he says, pointing to his lip.

Allie to Sami, “I love you but I do not want you involved in my child’s life.”

Sami to Rafe, “I want to report a crime. The police commissioner is trying to steal my grandchild.”

Sami to Will after seeing him with Ben, “If this is some kind of sick joke?”
Will, “We bonded in prison.”
Sami, “You bonded. With the Necktie Killer.”