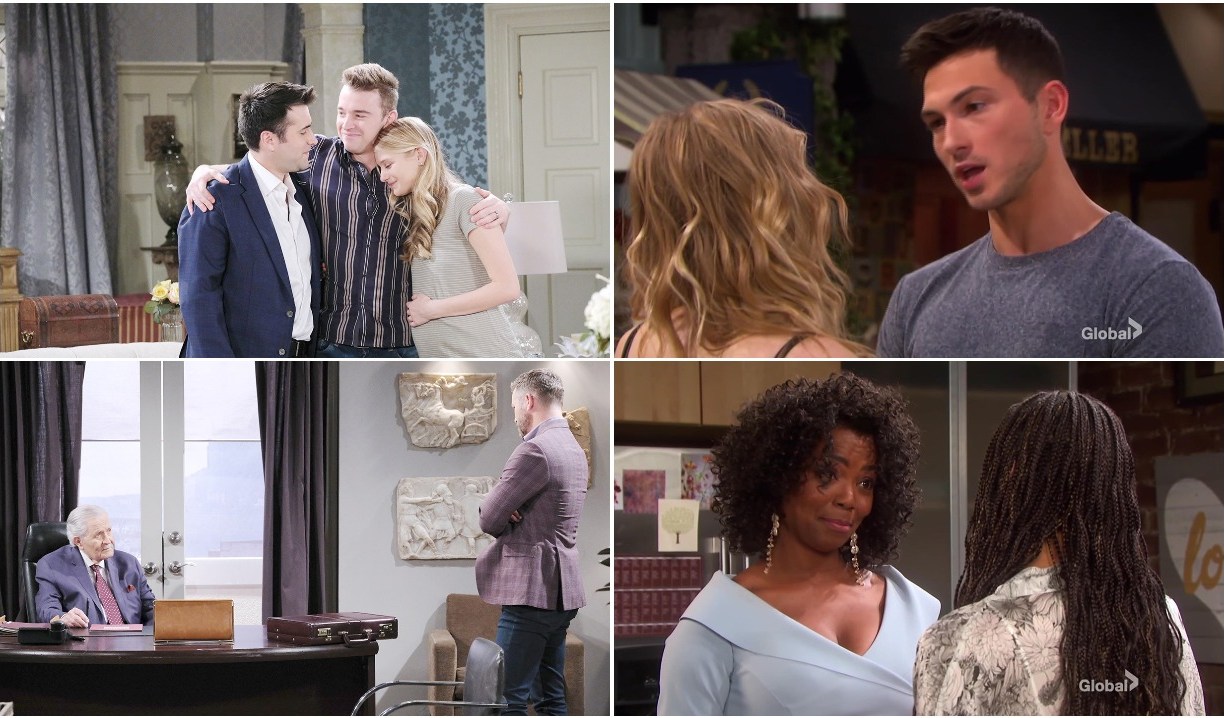 We got to know Allie a little better this week and oddly, Sami and Lucas’ kids are nothing like the two. They’re mature and not the least bit bratty as we expected when we watched them as kids. I’m both impressed and disappointed. I can’t wait for Hurricane Sami’s return. Everyone in Salem knows her daughter is pregnant except for her. Ouch! There could be some payback in there for her.

Sami is gonna be the last to find out about Allie’s pregnancy. Salem folks are in for it #days pic.twitter.com/JWUT64tfTD

Someone help her, already

In last Friday’s column, I mentioned that Gabi’s kidnapping story wrapped up super fast. So did the aftermath. Like any Salemite, Gabi’s resilient. After being kidnapped, most people would lock all of the windows and doors and turn on every light in the house before diving under the sheets, shaking. Gabi bounced right back and is ready to get back to proving Jake is Stefan. And all Sonny and Will did about it was to look annoyed and say, “Oh no.” It’s bloody annoying that neither of them could have just said to her, “You know, Gabi, you’re right. Jake could be Stefan. Want help in finding out?” That’s just a missed adventure they could have had together before WilSon rides off into the sunset.

I cringed when Nicole promised Allie she’d do anything she could to keep her mother away from her. As a parent, shouldn’t she know better than to go against the parent code? Nicole only needed to tell Allie that no matter what, she’d be in her corner when Sami learned the truth. If I was Sami and heard about this…oh boy has Nic Nic made a mistake. In fact, anyone else who hasn’t told Sami yet is in for it!

Even though I don’t think Sami should be in the dark about her kid’s pregnancy, I still found it fun watching Nicole play keep away with Lucas’ phone so he wouldn’t call Sami.

Abortion is a four letter word in Salem

This week, Lucas told Kate he had to ensure Allie didn’t “make a mistake we’ll all regret.” Since we all know Days of our Lives doesn’t do abortion storylines and since the next scene had Allie saying that it was too late to abort her baby, I assumed that was the “mistake” Lucas meant. When he learned she was going to have her baby, Lucas told her he was “proud” of her. I think that sends a terrible message to those getting abortions. I’d have loved it if the show would get into this century and write in an abortion storyline. It could be filled with emotions that we could go through with the character. Most of all, it’d be relevant to this century. But for a while now we’ve been able to see the writing on the wall, that Allie’s going to give her kid to Rafe – or WilSon. Lucas heard of the pregnancy and then the adoption and went off on Allie in a tirade rivaled only by Sami. Even Nicole shook her head as if to say, “You stupid Dunce. What were you thinking?”

Lucas, “If you start acting like an adult, I’ll start treating you like one.”
Allie, “Excuse me?”
Lucas, “You have to take responsibility. You have to accept the consequences. You’re the one who went out and got yourself pregnant.”
Allie, “Oh yeah is that what you and Mom did when you had Will?”

Poor Lucas is clueless at parenting Allie. One would think his past would make things easier on him. I’m not sure Allie’s pregnancy is much different than what he and Sami did. At least Allie’s not keeping the baby when she knows she’s not ready for one. I love how self-aware she is. I also really enjoyed Allie, Will, and Sonny’s scenes. Will and Allie have great chemistry and who knew we were missing seeing Will with at least one of his siblings?

Anyone else wondering how Allie and Ciara will get along once they meet again? Speaking of Ciara – the highlight of the week was Ben warning Claire not to hurt Ciara and Claire calling Ben out for being a hypocrite since he’s friends with Will. Boom!

I guess we’re moving on from Brady and Sarah’s revenge plan, which is fine with me, considering they were terrible at coming up with a good plan of attack. Two peas and all that. I loved that Sarah confessed to Xander that Brady wasn’t her lover. It gave Xander hope. And that she almost admitted she couldn’t go through with sex with Brady because she’s in love with Xandy. Their scenes ran a gamut of emotions from anger to betrayal to love. I was wowed. Poor Xander. If only he didn’t see that as an immediate sign to start wooing her again. He always goes too far trying to get back into Sarah’s good graces. Like trying to give her another baby in Allie’s kid. Oy. He probably needs another chat with Jack to calm him down.

I loved the surprise of Brady getting Victor to lie to the cops and confess that Kristen didn’t stab him. It’s such a bizarre way for Victor to make amends, though of course, it backfired on them. I’m anxious to find out how this plays out, especially now that Kristen’s back.

My Val returned which was another highlight. Her scenes with Lani were sweet and welcomed. Though I was torn between Vivian and Kristen stalking Lani, it turned out Kristen couldn’t stay away. As much as I know Kristen’s a nutter, and I don’t like how Lani, a cop, is harbouring a fugitive, I was still happy these two friends were reunited. Yep.

Join in on the discussion with your own thoughts on whatever storyline made you think this week.

Victor to Eli, “Vivian Alamain came back to my house naked, and I knifed myself.”