Deconstructing DOOL: Beyond the Criminal Element Were Touching Moments and Random Proposals 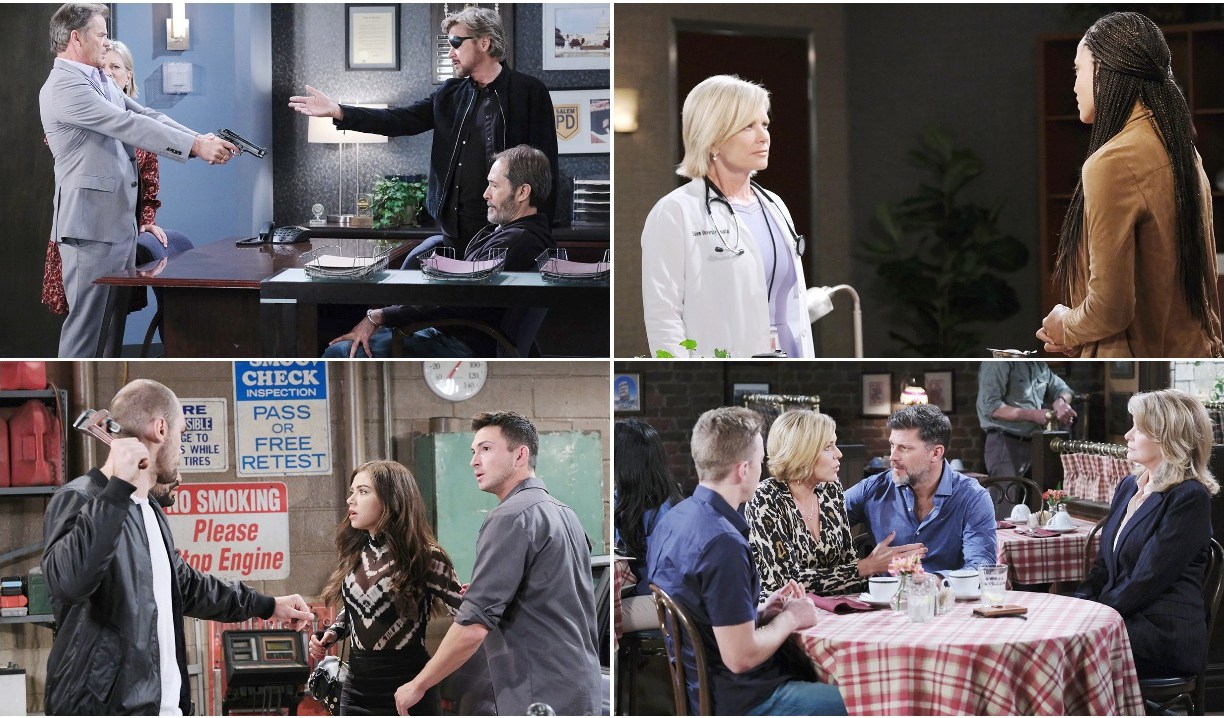 There are fewer lawful citizens of Salem anymore since we’ve added Justin Kiriakis and Zoey Burge to the list of criminals. It’s truly astounding and a little extreme for me. The interrogation room got a workout this week with Steve and Justin going rogue on Orpheus’ ass and Jake and Jack going off on Gabi for a crime we’re sure Rolf and Vivian committed. Beyond the criminal element, we saw some touching moments and for some reason, Salem men couldn’t resist the urge to propose to their girlfriends. What’s in the water?

In last Friday’s column, I babbled about the obvious – that crimes are often overlooked in Salem, and how even our most saintly characters these days are turning a little darker than what’s comfortable for many viewers.

This week, the town’s lawyer, Justin Kiriakis, pulled a gun on Orpheus at the cop shop no less. I mean, I don’t blame him, but if SPD wasn’t so corrupt, he’d have been in jail. Having good and decent, moral, law-abiding characters constantly going outside the law is chaotic. We need the good to balance the bad and though I still see Justin as good, I’d rather have seen Steve hold him back from beating on Orpheus rather than stealing a gun from evidence and almost shooting the man. Ack. Worse, later, Justin wasn’t feeling contrition but was still bitter that Steve didn’t off Milo, and he felt insecure that Steve has the killer instinct that Justin doesn’t have. Well to be fair, Steve was ISA and has always straddled the line between naughty and nice. Justin’s supposed to be a good guy. Stick to what you know.

Like Justin, Zoey, another lawyer, pulled a gun but she pulled it on a cop. Not that Rafe and Hope aren’t strangers to breaking the law. But to top it off, Hope let Zoey go after hearing her sob story that Orpheus had her son. (Just who is her son anyway?!) Hope didn’t even get proof. I’m not saying I necessarily disagree with Hope’s decision to let her go but having everyone in Salem turning to crime just muddles things. I like my characters consistent and I don’t want them straying too far from who they are. Good or evil.

Orpheus’ reign of terror is over

I don’t have a lot to say about the end of John’s kidnapping ordeal or Orpheus being sent to jail or even the bomb that Orpheus planted. Likely the ISA will just spring him from prison anyway and I’ve had my fill of kidnappings so I am happy to move on. One good thing that came out of this is that Marlena saw Hope with new eyes and Hope felt good about herself again. She’s ready to forgive herself for what Princess Gina did in the past. Steve also played a big part in the rescue and has put Stevano behind him. He’s ready to ask Kayla back. But um…she’s in the middle of a proposal from Justin. As nasty as it sounds, I want Steve to interrupt. Justin and Kayla need to end already.

I wish they’d separated out everyone’s Orpheus interactions a bit. If every story had its own day to deal with things, it wouldn’t have felt so rushed #days

It was a bad idea to put three low energy folks in a kidnapping story about a random child. #days

I teared up watching Abigail say goodbye to her children. I was amazed at how well she explained her hallucinations and made them relatable to the kids. But I’m glad her story has come to a close for now because it was too close to what we’ve already seen with Abs. As much as I like Jack and Jennifer, they’ve been relegated to the background as scenery which makes them boring. I can’t wait for their upcoming adventure. Did anyone else notice adorable Thomas look directly into the camera and grin? What a character!

I hope we get to see more of Will with his grandmothers before he leaves Salem. Their scene at the pub with Eric and Nicole was the highlight of the week for me. I’m fond of the slice of life scenes. I loved Nicole calling Sami to tell her she was engaged to her brother and Sami congratulating her while texting Eric moments later to ask if he lost his mind.

Eli and Lani became engaged this week. It was long overdue. It was super low key. But that’s not all their news. As we know, Salem doesn’t sell birth control, and since Eli and Lani have an active sex life, Lani became pregnant – again. I imagine it has to be frightening for Lani since she lost David. I can’t imagine the anxiety she must be feeling. But…I hate to be a downer but honestly, if she was that worried about having children because of David’s death, she should have used protection. So here we are embroiled in another baby storyline. Meh.

Ciara surprised me this week. She doesn’t like Gabi but defended her, knowing she loves Stefan and wouldn’t have done anything to harm him. She also wisely called Lani biased. Not only did she stand up for what she believes in but what she said was heartfelt and kind. I find they don’t write her with enough personality for me to be able to characterize who she is. This helped.

I also love that Ciara doesn’t want a “real” ring for her engagement. This is so rarely seen in soaps. I also loved that they went old school and handed out the Save the Date cards and are going small with their wedding. It’s realistic. I was a little worried watching that silly cake testing that they were going to write it going in another direction of “let’s invite 200 of our closest friends and family.” Is anyone else getting nervous about their upcoming wedding? Now that we know Claire’s returning, Soaps.com spoke with Olivia Rose Keegan on Zoom about Claire’s mindset and she spilled a little tea of what’s to come.

How about those goons who heard of Ben Weston being The Necktie Killer and ran away with their tails between their legs? I was torn between feeling irked that Ciara had to resort to using that information and laughing that the guys were frightened by his reputation. I admit I was yelling at the TV, “Use your gift, Ben!” Ben played it up well, telling them to listen to Ciara or “I’ll find you and end this!”

We need Vivian to come in here and show these goons how it’s done. #Days

Those are this week’s thoughts on Days of our Lives. Feel free to join in on the discussion!

Ben to Jake, “I don’t see why Gabi would want to hurt you when she thinks you’re Stefan.”
Jake to Ben, a mentally unstable man, “I have no idea. I’ve been trying to figure out the behaviour of the mentally unstable is a whole brand of crazy in itself.”
Ben, “I know something about crazy. It’s not Gabi’s problem.”
Jake, “Fine, sane with homicidal tendencies.”

Kayla to Steve about Justin, “You saved his soul.”
Steve grins. “Let’s not go overboard.”

Victor to Kayla, “You’re better off with Justin rather than that aging delinquent.”

Sami’s text to Eric, “You proposed to that bitch? Are you out of your mind?” 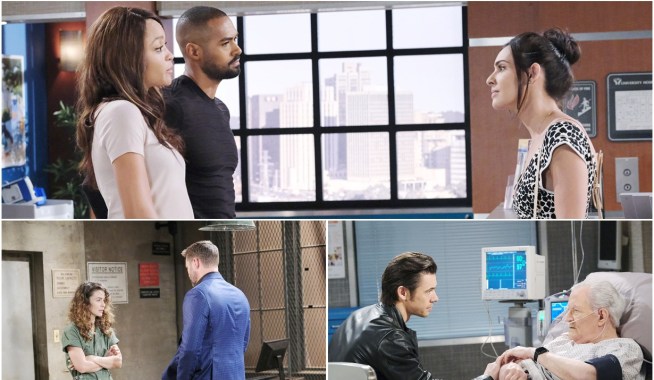 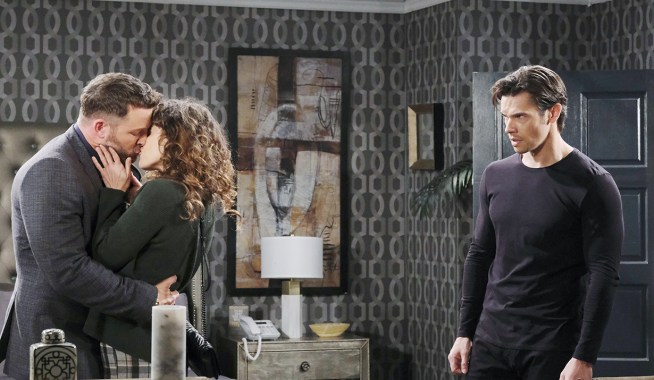