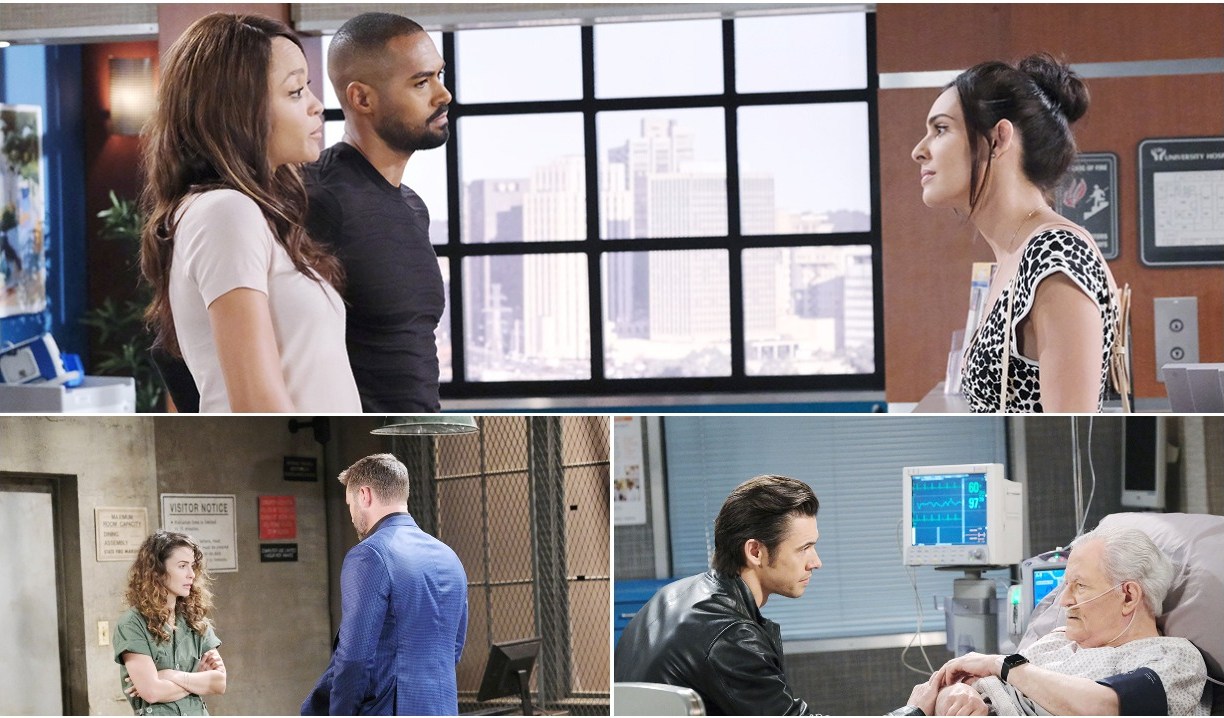 Lots to discuss on Days of our Lives this week, so let’s get right to it!

Bonding over a bad situation

After letting Kristen take Rachel to who knows where Brady was down in the dumps and called Tate to tell him he missed him and would try to visit soon. I feel for Brady but that’s an empty promise. And me feeling for him didn’t stop me from wanting Sarah to punch Brady in his stupid face when he admitted he let Kristen take off with Rachel. Instead, she drank his whiskey. I was letdown momentarily until Sarah surprised us by pretending to have sex with Brady to get back at Xander and later whispered to Brady about their plans to take Xandy and Victor down. That’s the drama we need! Of course, these two are essentially good and sweet at heart, and revenge may not be easy to follow through with.

Highlights: Brady blamed Victor, the victim, for somehow forcing Kristen to stab him. Ouch! Brady ranted that he should be CEO, not Xander since Xander wasn’t qualified because he doesn’t have an MBA. So funny and something we’ve often mocked ourselves but honestly, does anyone have an MBA in Salem?

Has anyone graduated from High School? 😜

Viewers are shaking their heads collectively, some losing their minds since Sarah kidnapped a baby and nobody from SPD cares. They also don’t care that Brady was an accessory to a crime in letting an attempted murderer go or that Xander and Victor stole a baby and swapped it out for another. Of course, the coppers won’t do much now that Lani let Kristen escape and Eli covered it up. Such a tangled web! As we know, crimes are often overlooked in Salem depending on where the storyline is going or if the characters are Horton or Brady’s and sometimes if the cops just play favourites or are involved. This week the cops were too busy arresting Gabi. Again. And since she’s neither a Horton nor a Brady, and they hate her and the evidence looks bad, this will be bad. My hope is that she doesn’t let Justin become her lawyer and that someone will get Jake a DNA test already. Instead of acting as if it’s impossible for him to be Stefan.

Another kidnapping. Honestly. So this time, Orpheus demanded 10 million and threatened to kill John if Marlena brought in the cops so of course Marlena brought in the cops and everyone else she knows! But Orpheus dealt with it not by killing John but by asking for 5 million more. I laughed aloud. Not only are his threats empty so far but he might have considered threatening to kill one of her grandkids in exchange since obviously if he killed John he’d wind up with bupkis. I didn’t realize John and Marlena were wealthy. That happened before I started watching. They sure don’t live like it. The townhouse and Marlena’s clothing are a testament to that. I know kids are expensive but surely Orpheus doesn’t need 15 million dollars to raise David! This guy needs to go down. But not everyone shares that view!

I was hoping Orpheus would stick around as a full-time villain but after this farce of a storyline, looks like he’ll be out the door quicker than I thought.

Give me more Rabi

We were right to suspect Dr. Rolf might not be on the up. He lied about bringing Stefan back to life so he could set Gabi up for a fall. At least he said that someone else might have zombified Stefan. Vivian. That means she’s behind drugging Abigail and now setting Gabi up. Vivian’s interference in her son’s private life is something she finally has in common with Kate. Gabi and Dr. Rolf had mad chemistry and I would love if they were in more scenes together, even if they’re at each other’s throats. The biggest problem with Gabi being fingered for a crime she didn’t commit is that Abigail could still be in trouble even when she’s in Florida.

Deep dive into thoughts on CIN

A commenter in my last column Deconstructing DOOL, on CIN, was upset about comments that I made about the couple which to them meant I disliked them. I wish it was that simple. If that was the case I wouldn’t even mention them. Do you see me mention Ericole? I think the commenter wanted some validation on their favourite couple, which is something that I haven’t been able to give for months. I get it. But I can’t fake it. And providing validation isn’t what this column is about exactly. But I can explain.

The writing for this paring makes it easy to be constantly disappointed when I want more for them. They’ve great chemistry, they’re hot together, Ciara is a legacy character, and Ben’s interesting. Though they started out so promising, things soon fizzled. I’m not 100% happy with the writing for any couple but CIN has issues beyond the coupling. Paulie, a Soaps.com commenter, explained my position on CIN surprisingly well except that I see Ben as being mentally ill, not a serial killer. Though it’s a soap and I still reserve the right to mock!

Paulie, “It’s not about disliking this couple, it’s about being frustrated at Ben and Ciara’s lack of character development and their repetitive storylines. Soap or not, Ciara should have been seriously conflicted by her feelings for a man who she knew had killed 3 people and attempted to kill 4 others, some of whom were members of her own family. Ben should have been more focused on finding redemption from the people he’d wronged rather than pursuing a romance. Plus, time should have been devoted to Ciara dealing with her rape ordeal and Ben dealing with his childhood abuse. Over a long period of time they could have been slowly drawn together, encountering, and dealing with obstacles along the way. That is how you create a super couple. What we got instead was them prematurely thrown together and the writers currently having no clear idea what to do with them other than sex, Chinese food, repetitive rescue storylines, and now a wedding proposal that came out of nowhere. And the idea that Bo would have been at all happy about his daughter marrying a psychotic killer is laughable.”

I’m team drama. I want that full ‘they made it against all odds’ story, which should take a little more time to reveal itself on screen. We’re consistently getting highlights and repeats. Considering the low ratings for the show, I’d say I’m not alone.

Why can’t this Ben thing be that some people will never accept him and Ciara has to live with that? #DAYS

Those are this week’s thoughts on Days of our Lives. Feel free to join in on the discussion with your own.

Xander to guard, “I have to talk to Maggie Kiriakis right now.”
Misogynistic guard, “Visiting hours are over.”
Xander, “Then you’re going to have to order a suicide watch because she just wrote to her husband saying she’s going to kill herself.”
Misogynistic guard: “Women are always saying stuff like that.” 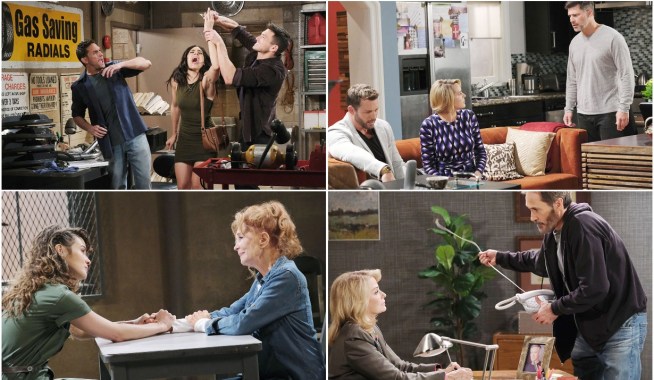 Deconstructing DOOL: May Sweeps Is About to Take a Darker Turn

Deconstructing DOOL: Beyond the Criminal Element Were Touching Moments and Random Proposals 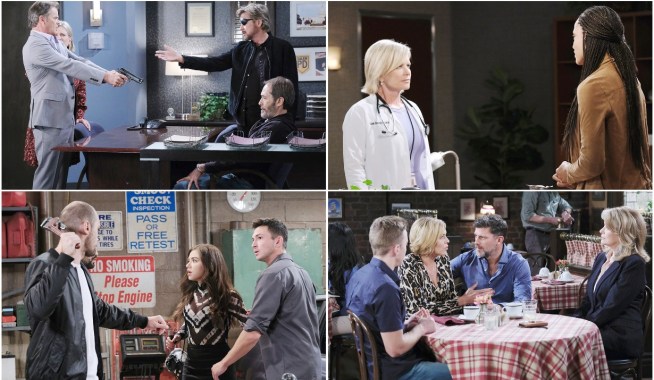