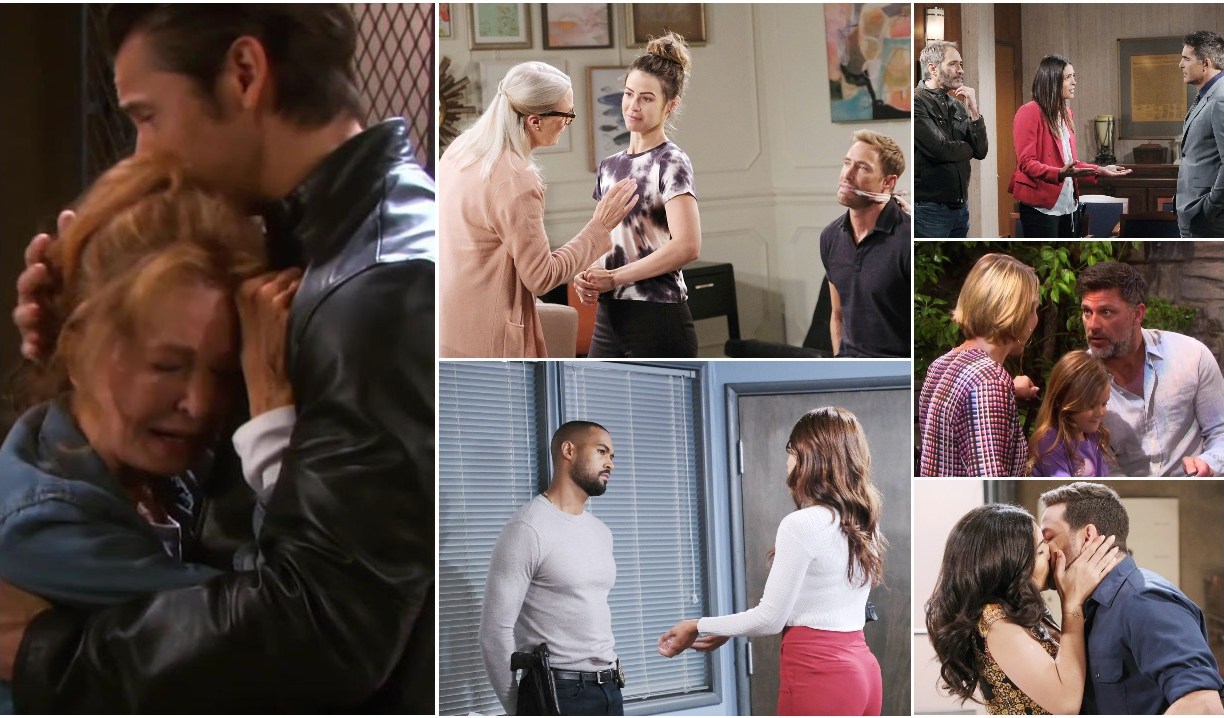 Days of our Lives is in the midst of May sweeps and we’ve watched another kidnapping, another back-from-the-dead story unless we believe it’s another doppelganger story. We’ve got a new cutthroat lawyer making our Salemites and some of us viewers miserable, and Abigail’s gone off the deep end again, thanks to someone drugging her. All in a week!

The truth is finally out

Maggie took an awfully long time to figure out she killed her own grandchild. Almost the entire hour. I thought it was understood right away when Xander started to tell his version of the story but I guess when you’re hearing it for the first time it takes longer to process. I love how Xandy kept himself looking golden by leaving out certain facts for as long as possible. It’s a wonder Maggie let him hold her while she wailed away since he and Victor caused this whole mess. But then as a prisoner, who else does she have? I almost wish she didn’t know. I can’t imagine her being able to survive this.

Zoey and Ted Laurent went to the same cutthroat law school. She was almost more horrible in her quest for getting Evan/Christian custody of David than Ted was in court. That or I’ve forgotten his tactics. But why talk details about Sonny and Evan’s sex life? The details are irrelevant. No judge would let her discuss such intimacies. She’s a crackpot if she thinks one would. And Will wasn’t there anyway! It was validating to hear Sonny shut her down. When she started talking smack about Rafe “murdering Jordan” I wanted more than ever for her to lose the case. And leave town. Forever, especially since if Rafe loses, I’m pretty sure he’ll ‘pull a Sarah’.

Chad made a bad move on Monday, having an epic meltdown in front of Abigail, who can’t be around stress right now. I can’t imagine how terrorized poor Abigail feels. It’s a shame Tony is back in Paris because Chad could use his brother’s support, though once in a while Chad seems almost cold or detached about her DID. In last week’s Deconstructing DOOL, we talked theories on who could be drugging Abigail. I’ve no new theories to add but my top theories remain that either Abigail’s alt is doing it or my Vivian is and Vivian still seems most likely. She’d want Stefan back as CEO of DiMera which would mean Stefan is Jake?

More than ever I believe Jake is Stefan. The way he’s taking being a doppelganger is – weird and seems like he’s hiding a lot – and not just a reason behind those goons visiting him. I’m not into having him find Gabi a “pain in the ass” just like Stefan did. I was hoping for more originality in that respect. Soaps.com interviewed Brandon Barash this week and he made some remarks about Jake being very different from Stefan, which was strange since Ben found Jake to be exactly like Stefan in mannerisms and behaviour. I agree with Barash’s assessment. And though I like Stefan and Stabi, I’m not a Jake fan. He’s not well spoken, stylish or elegant, the very things I liked about Stefan. That’s a true testament to Barash’s acting range. I was going to suggest Gabi needs to steal his DNA and get the testing over with but going to Dr. Rolf was a great idea.

Sarah has had some long monologues this week. Long, a little monotonous, but compelling. I’m against her kidnapping Rachel. I think we all are. It’s illegal and reproachable. She slung the dirt at Kristen all week yet what she’s done isn’t much better! But her explanation for leaving makes sense. She essentially is Rachel’s mother and knows Kristen DiMera’s past could likely mean a child raised by her will be psycho. Not only that, but she’s completely messed up after learning that her mother killed her baby (still refuse to believe this!) while drinking and driving. I’d have to be made of stone not to feel something for her. So would Kristen and since Kristen thought she lost her own child for an entire year and went into a crazed state and accidentally murdered Haley Chen, I’m thinking she may be sympathetic to Sarah. Bets that she’ll take Rachel on the run rather than face prison? Boy, poor Brady really knows how to pick ’em…

It had to happen sometime. All of the Salem police go bad or go rogue. It’s almost a rite of passage. And Lani has done it. She let Kristen escape, knowing her BFF attempted to murder Victor Kiriakis. It’s wrong, it’s illegal…but it’s also disappointing, especially when all our Lani seems to do these days is look for ways to put Gabi behind bars for breaking the law. It hits harder knowing Lani, a good and decent person, would break the law and it makes her look like a big, fat, hypocrite. And what about Eli? He looked at SPD video surveillance and saw Lani letting Kristen escape, then kept it from Rafe, the commissioner. So Eli’s also a bad cop now? I’m not even sure I care about that right now. I’m more in awe that SPD suddenly has video cameras in their offices…

God Lani was so self righteous explaining her actions to Eli.

I love that Lani is unapologetic about her decision. She’s loyal and she’s a mother. And Eli has every right to be pissed and he’s right. Kristen DID manipulate Lani to influence her to make the decision when she brought up David

I understand POVs from Lani and Eli #Elani #Days

It was a highlight of the week to see Eric so happy when Holly called him Daddy. I was very touched by this, especially after what Eric’s been through losing his child and having Sarah taking off with Rachel. The scene made me want more happiness for this little family.

Those are this week’s thoughts on Days of our Lives. Join the discussion!

Zoey to Rafe, “My brother didn’t kill Jordan. You did.”
Rafe, “What are you smoking?”

Gabi to Jake, “You’re standing in front of me by the grace of Rolf or God. Whatever!”

Xander, “How are you feeling Uncle?”
Victor, “Like I got stabbed in the chest by a knife-wielding maniac.”

Deconstructing DOOL: May Sweeps Is...