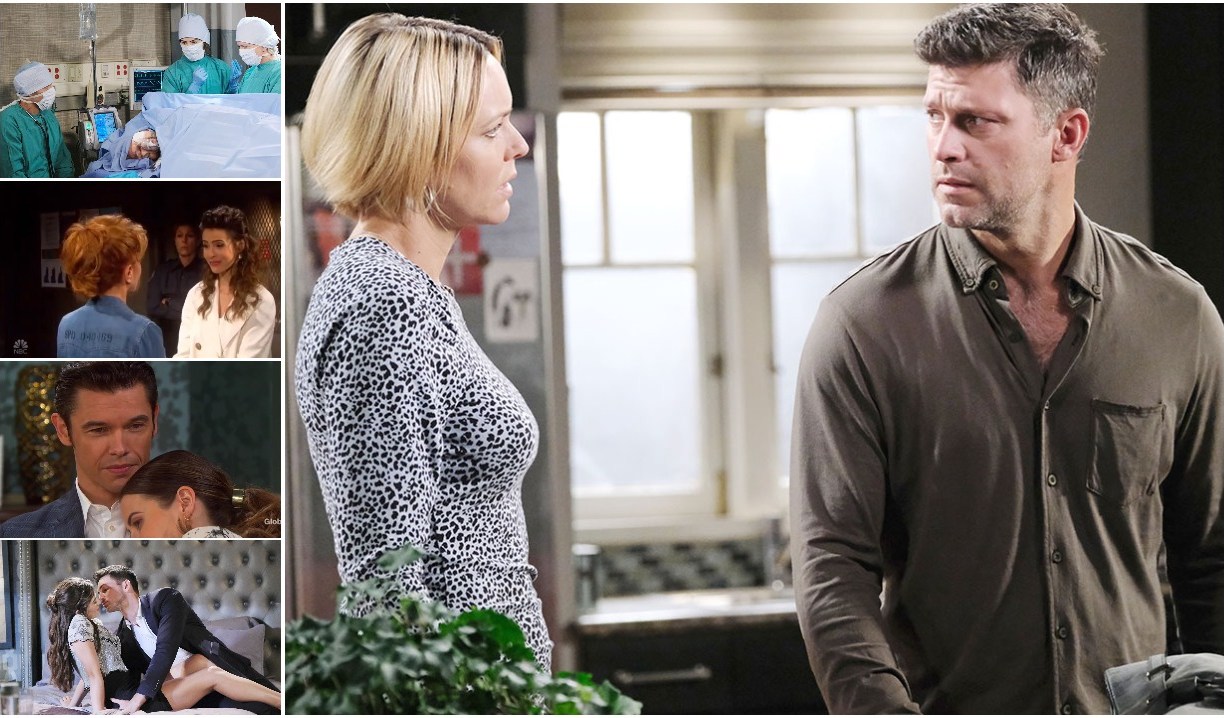 Days of our Lives kept many of us invested all week long, especially since we were all watching the baby swap storyline come to a pinnacle. The romance, intrigue, humour, and twists kept things interesting and balanced. This week I also wrote some fan fiction for the DiMera and Kiriakis butlers, Harold and Henderson because I wondered what it would be like to see them gossiping about their employers.

Xander got what he always wanted

Xander finally proved himself to Victor as a true Kiriakis and for it, was given a coin that was handed down to Kiriakis children over the years to signify family support and belonging. I was happy for Xander, but the cost was ridiculously high. And it’s pretty crazy that the way to Victor’s heart is to kidnap a baby. When all is said and done, will he only have Victor’s support? No love, no child? That’s a pretty huge lesson to learn and it’s sad he wasn’t able to learn it at a young age. But maybe this means he won’t be so soft anymore. Paul Telfer touched base on Xander going soft and on how he almost played EJ DiMera in Soaps.com’s recent interview.

Nice touch to have Sarah visit Maggie in prison before the wedding. I still don’t think Maggie was the cause of the accident considering she was driving in the same direction as Adrienne, about five minutes after they’d already left. But since that’s not what’s being shown, I digress. I respect Mags for doing time. I didn’t even mind at all that she cried seeing Sarah in her dress though I could have done without the extra sobbing through that scene and with Victor. Wait until Sarah realizes that Maggie caused her baby’s death…yikes.

I was a little letdown at Eric’s reaction to learning Mickey wasn’t his. Then he showed great restraint being around Xander afterward which must have taken great strength. He allowed Xander to order him out of the mansion! I was expecting him to punch Xander’s lights out.

Nicole’s selfishness was at an all time high this week. That’s always been her nature so it’s expected but my problem was that she went through the trouble to find the truth and tell Eric and then bugged him all week not to tell Brady and Kristen that Mickey’s their kid. Weird. And after everything Nicole went through with Chloe, it’s incredulous that she’d even consider this as a possibility let alone continuously badger Eeyore to do it. Those scenes made many rage out, including me. What she was suggesting is almost as bad as what Victor and Xander did. Poor Eric was struggling to wrap his depressed brain around the news and probably only needed her silence and comfort, not those nasty suggestions. I’m wondering if this will hurt their relationship when he pauses to think about how different they are at their core. I’m glad he told Sarah the truth. It was the right thing to do, as painful as it was. Sarah’s reaction was better than Eric’s but I’m dying for Monday’s episode which should be an all out war between her and Xandy.

I bloody love this show. Kayla performed surgery on Steve’s neck, saying that the location of the chip was surrounded by tissue and that she’d have to cut through the vital areas of the frontal lobe in order to get it out, but she was cutting at the back of his neck! Eyebrow-raising. When that self-destruct message started to play, it sounded as if it was coming through the hospital speakers. I started to laugh and had a hard time not laughing five minutes after. Hilarious! I wondered what would have happened had she not removed it. Nothing at all or would it have blown them all to smithereens?

I like Justin and was glad he and Kayla found comfort in each other and rebounded into a relationship. While I’m big on waiting a year after one relationship ends, sometimes rebounds can be good for people. It seemed to work for them, and it’s smart of Justin to know that Kayla would jump back into Steve’s arms given the chance. It’s only a matter of time. Of course Steve woke up with the classic amnesia trope. We have to wait just a little longer for this couple to reunite.

The chip having a speaker is preposterous! LOL.

@SheKnowsDOOL Kayla fretting for two days now is on my last nerve. Everyone reassuring her makes it worse. She did the best she could with what she had. Enough! Does anyone else feel this way, too?

More: Relive the original Dallas through the pilot recap

Life outside the bedroom

Last week in Deconstructing we touched on CIN’s romance and this week they did get steamy together but they also spent some time apart. While stans of Ciara and Ben will love any scene with them in it, there are many viewers who still either loathe this couple or don’t mind them but wish they’d get lives outside of each other. This week there was a great scene of CIN coming in from job hunting and discussing it like a normal couple. It’s what I’ve wanted to see for a while. Give us more of this. I was glad Ben got closure with Evan for murdering his sister but the nature of the scene was a little cringy. Some viewers found fault with Ben lashing out at Evan when essentially, Ben did the same thing. He murdered more people and like Evan, let their families grieve over the deaths of their loved ones without coming clean. No argument here but seeing them commiserate wouldn’t have worked either. My thought is that the situations differ as do the reasons behind the murders.

At least we learned that Orpheus is being held at some compound for questioning – probably to keep him from escaping again. I’m thinking Even should be sent there too. He actually thinks he murdered Jordan by accident. That’s a little frightening.

Those are a few thoughts on Days of our Lives this week. Join the discussion with your own!

Xander to Sonny, “I was hoping you’d be my best man.”

Sonny, “You know where you can stick your olive branch.”