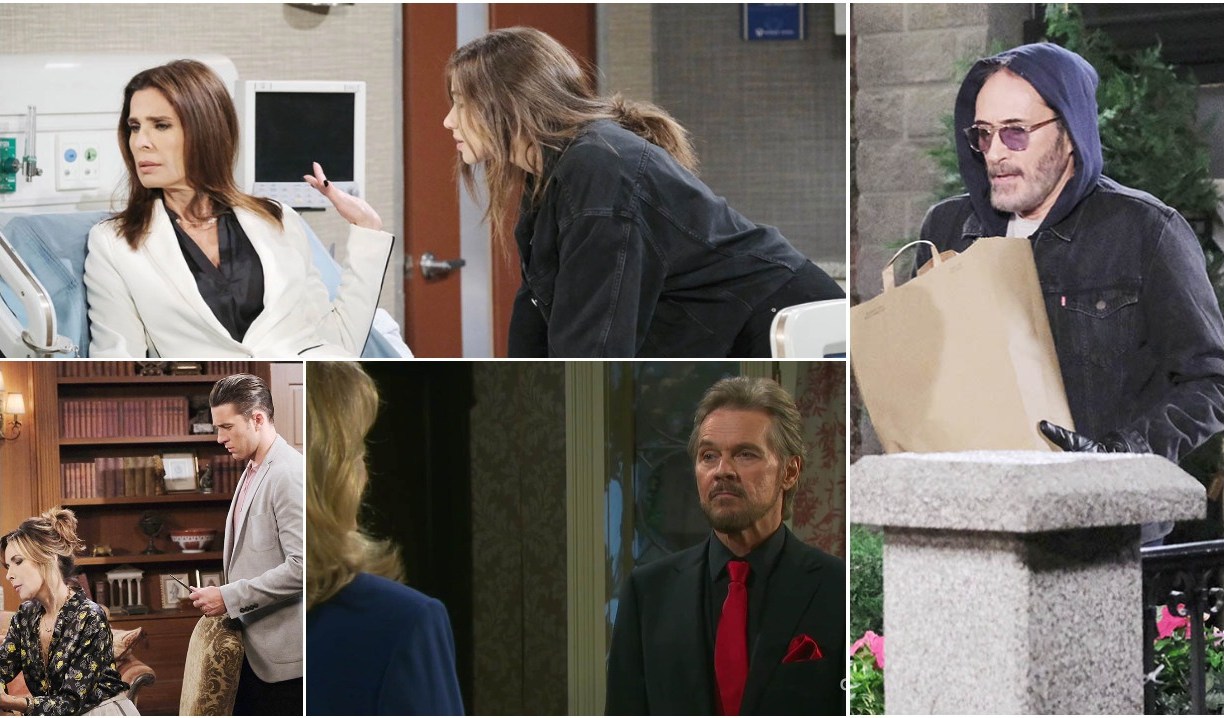 This week on Days of our Lives, saw a balance between the campy storylines and the deep-reaching drama, with of course, as always, some humour thrown in. Mackenzie’s bone marrow transplant was successful and it looks as though the baby will be fine, but the more important story seems to be that Kristen remembered that Rachel had a heart-shaped birthmark on her neck and Nicole realized it’s just like Mickey’s. Since Nic didn’t blurt it out in Friday’s episode to Eric, will she spill next week? Doubtful…

The judge threw Evan’s confession out which means I won’t be able to mock our show by saying, “Only in Salem would a forced confession be viable.” I love it. This twist added realism to the story which we talked about in last week’s Deconstructing DOOL with the lack of realism complaints from viewers. Plus it means another setback for Ben which allows a bit more drama to unfold. I guess Ciara doesn’t watch enough cop shows to know that a forced confession doesn’t hold up in court. I couldn’t blame Evan for gloating. At least there’s doubt now that Ben murdered Jordan since both his and Evan’s DNA was at the scene of the crime. Maybe that’s enough to toss his conviction. SPD doesn’t yet know that Evan pulled a gun on Sonny, Will, and Ciara, so they could press charges. They never mentioned the gun he used but I can’t imagine it’s registered to him. If it is, it’d be registered to his alias. Maybe that’s a cause for arrest. Did everyone enjoy Friday’s reappearance of Orpheus? I like the twist and what’s to come…

Will “confronted” Victor again about letting him go to prison, and explained how the repercussions were further reaching than he thought Victor understood. But Will must have had a momentary lapse of judgment because Victor understands all too well. And he doesn’t care. He doesn’t care that “Sonny shacked up with a murderer” as Will stated. He only cares about his precious Maggie, obviously, and ‘screw the rest of them’. Poor Sonny. Poor Will. That scene would have gone better for me if Will would have put some backbone into it. Really let Vic have it, though Victor’s health isn’t the greatest so I’m assuming that’s why he was calm. Victor has caused so many problems with his family and his wife and another cropped up with the return of Dr. Amanda Raynor. Somehow along the way, as Victor’s been manipulating everyone in his life, he’s missed the fact that Xander isn’t the same “devious bastard” he once was. At least not to the point of murder. Raynor better hope he doesn’t have another goon on his payroll to take her out. Even if he does, Nicole now knows Mickey’s Kristen and Brady’s kid. Though I doubt she’ll spill that tea.

Many are unhappy that Will and Sonny are still living under Victor’s roof. It is a shame but it’s a huge place and since neither has a job or anywhere else to go, I can’t see them leaving. Maybe my Gabi will move back in once she’s out of the hospital. I wouldn’t mind seeing her and Victor sparring.

I’ve been really impressed by the writing for Kristen and Brady this week and of course the acting. The scene where Brady takes her through Unconscious Remembering was the most moving scene of the year so far for me. I felt Kristen’s pain. I realize Nicole hates Kristen and for good reason so I was glad they didn’t have Nic even reluctantly lending support to Kristen even though Nicole has been through a few similar tragedies. I don’t think Nicole should be ready yet if ever, to forgive Kristen.

Days of our Lives is zombifying everyone on canvas. First Steve and then Hope, followed by Chad and Marlena. A few more and they could redo Michael Jackson’s Thriller video. It’s almost becoming a pandemic, the way COVID-19 is in reality. I’d like to know what was in Chad’s drink that Stefano spiked because ever since he drank the Kool-Aid, he’s hearing Stefano urging him to kill, kill, kill. But luckily, it doesn’t seem to be taking since he experienced confusion when he almost smothered Gabi with a pillow. How ironic that Rafe doesn’t know he stumbled into saving both Gabi and Kate’s lives.

The whole town should be brainwashed. Let’s make them all walking weirdos 😂 #days pic.twitter.com/0yOJnaycUV

Some of Princess Gina’s best scenes were hating on Hope’s children. From her snooty mannerisms and body language to her accent. Sure, she may not have the best British accent, but the whole package this week has been entertaining AF. The accent issues added to the great lines directed toward Shawn and Ciara. Calling Shawn “strangely repulsive,” and telling Ciara she needed a breath mint was surprising and funny. And of course, Shawn dished out better than Gina could take. He had zero patience for her crap. Somehow, Ben has become Ciara’s conscience. He had to persuade Ciara to go see her mother and brother. Ciara sulked that there was nothing she could do for her. True, I suppose, but there was also nothing she could do for Ben, lying around in his infirmary bed either. But since she hasn’t been with him for a year and “Hope” hasn’t been herself this whole time, I can’t exactly blame her.

Has anyone else wondered why Gina hasn’t mentioned her own kid, Greta, one single time? I realize she’s just a plot point but I wouldn’t have minded a Greta return.

Try as I may, I can’t find much to like about the Stevano story anymore. Now that he has his queen, it’s lost its luster for me. Stefano could always be a romantic, but the sexism and obsession are off-putting so watching him read the poetry to Not-Marlena was just – weird. To me, anyway. I’m probably not as much of a romantic as brainwashed Marlena or brainwashed Steve either.

Nicole asking about Eric’s mom … awww. 😍😍 Thank you #Days for including that scene and the info that Eric keeps calling John for updates on Marlena.

Those are some scrambled up opinions on Days of our Lives this week. Lay yours on me!

Some of the best lines come from viewers:

Soaps.com commenter AuntPat says, “Maybe I have a chip that keeps me watching.”

Formerlyusmc88: “If it’s a chip and they believe it’s risky to remove it, then why not ask the ISA if they have a programmer who can disable it or jam the frequency. Or better yet use [a] laser to begin to disintegrate it all together in steps.”

Kristen to Brady about the Unconscious Remembering, “Is this something she learned from Gwyneth Paltrow or something?”

Marlena to Stevano about his plan, “Making me into a zombie? Does that turn you on?”

Marlena to Stevano, “You want to turn me into an imitation because you are an imitation of the person you are trying to be.”

John to Princess Gina, “Stefano groomed you, used you, and threw you to the wolves. He’s got Marlena. What do you have?”

Will to Ben, “It’s better waking up to Arianna’s sweet face instead of your ugly mug.” 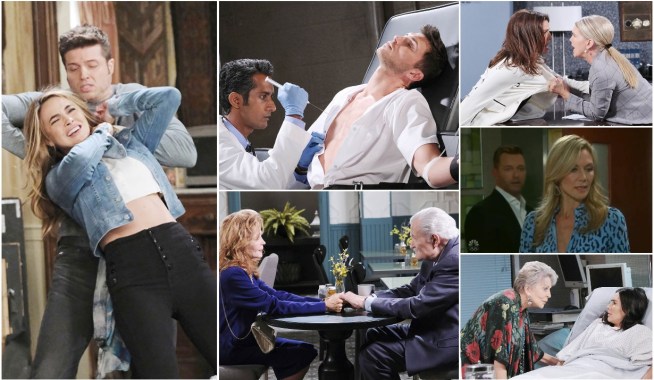 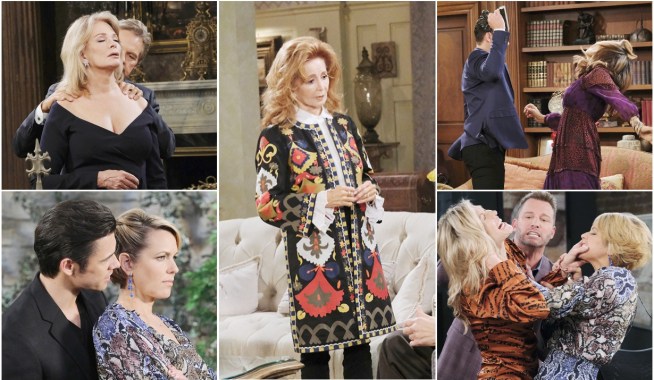