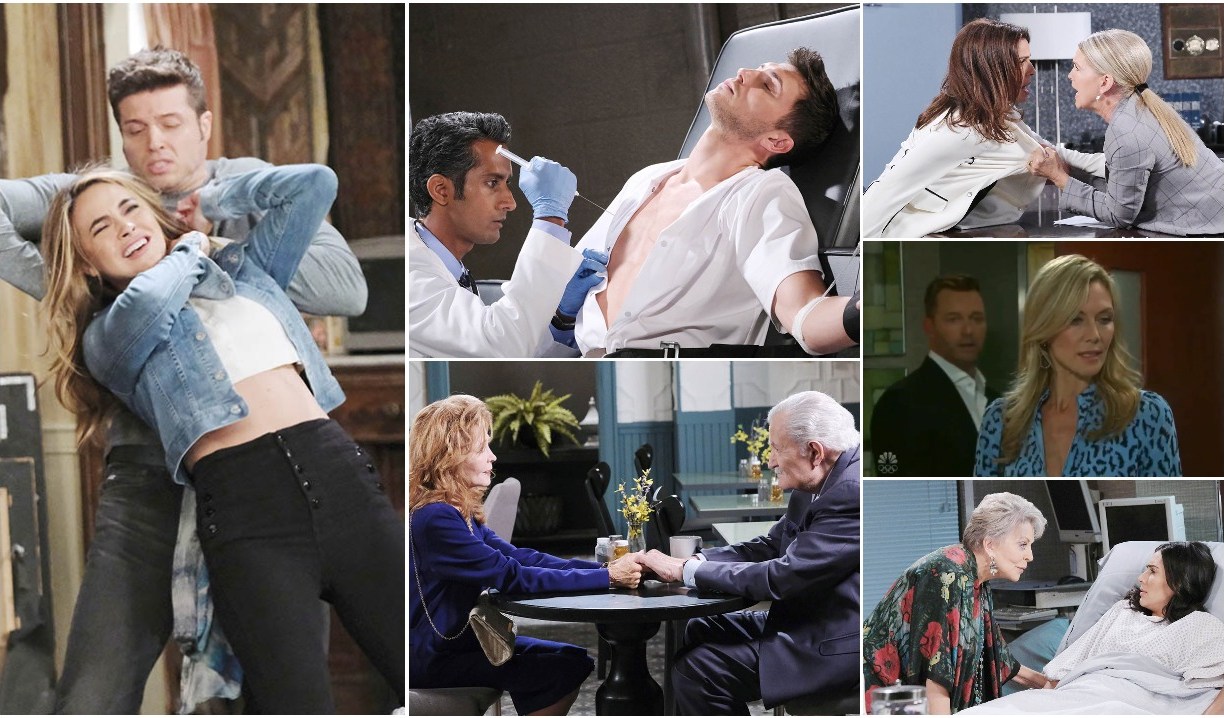 Days of our Lives focused mostly on Ben Weston’s execution storyline this week which meant half of the audience watched with rapt attention while the other half found it painful since they were watching sober.

Like so many other storylines, Maggie’s skipped a few key scenes that would have made me sympathize with her plight. Maggie turned herself in at the end of one show and then we didn’t see her being processed or anything and boom – the next day she was knocking on Justin’s door to apologize. Maggie cried and whined to Victor that if it wasn’t for his excellent lawyers, she’d be in prison where she belongs for her DUI. The only things stopping her from doing time are her Horton privilege, her billionaire husband, and… it’s Salem. There are other options. I asked readers their opinion on this and the majority at 31% suggested rehab while 27% said the truth about her killing Sarah’s daughter will be punishment enough.

Shawn and Gina returned after weeks of being MIA. No reason for their disappearance was given as far as I could tell. Mostly their scene consisted of Gina repeating “I’m Princess Gina. I’m Princess…” until she was blue in the face and Shawn looking for relief from his Gina-induced migraine. Jennifer Rose attacking her highness was a surprise and a highlight, but could have been so much fun if it lasted longer.

Three days of this

There are a lot of comparisons out there between Ben Weston’s execution and Sami Brady’s death penalty story from 21 years ago. Generally, any original storyline is superior because it’s fresh. The original was written more somber with fewer hijinks, and some fans, including myself, started to care for Sami through her emotional ordeal.

Ben’s execution storyline was campy and seriously unrealistic. The cheese was poured on like a romantic Hallmark movie, especially at the end, except we didn’t know in advance and weren’t able to use the Hallmark drinking game to get through it. So we watched sober. This wasn’t a problem for everyone, of course. But the lack of SPD in the story and the overuse of the inmate’s girlfriend made it difficult for many to take any of it seriously. Commissioner Rafe was dumbed down once more, running off to who knows where while Ciara of all people was in charge, taking calls from FBI, calling Statesville to stop the execution, and storming Statesville and somehow getting through security with a gun to Evan’s head. Why is Rafe, the police commissioner, not in any of those scenes? And why is he dumbed down like this? Those endless flashbacks of Ciara and Ben meeting and saving one another made sense and all but were overkill and Ben should have also been flashing to murdering Serena, Paige, and Wendy and trying to kill Marlena, Will, Abigail, and Chad. What a missed opportunity that could have gone a long way toward redemption for some viewers.

I was endeared by the Rafe and Ciara scene at the end. He’s been a good step-father to her, especially since she didn’t have her mama to support her. Of course Ciara won’t be brought up on charges by the prison or Evan since…Salem. And even though Ciara forced a confession out of a man at gunpoint, it’s sure to be admissible in a court of law since…Salem.

Ben having flashes of what his future life with Ciara could have been would have been far more interesting to watch than flashbacks of the last two (?) years. #Days

As far as criminals go…

We finally learned a little about how Jordan was murdered but at this point, meh. Don’t care. Evan’s not the smartest criminal Salem has seen. If he was really worried that his felonious past had caught up with him, he could have easily taken off with David when the first letter from Child Protective Services arrived before they learned he was Christian Maddox. And a thousand times after. Last week we lovingly mocked about how it felt like the 1990s in Deconstructing DOOL since CPS didn’t call Rafe, preferring instead to send snail mail. This week, as expected, Roman reamed Kate out for keeping Stefano’s reappearance a secret (pay attention – this was “payment” for her crime!) then fired her, stating that he already put an ad in the Spectator. Like it was 1990. I love how Hattie defended Kate and was glad Kate finally admitted that the simple life wasn’t doing it for her anymore. That’s our Kate.

Kristen is about as pious as Lucifer. It was pretty funny and hypocritical of her to lash out at Gabi about using a baby as a bargaining chip and for using a murder pacemaker app on Julie considering the extensive list of nasty things she’s done over the years to various Salemites such as assault, torture, rape, identity theft! In fact, if anything Kristen should identify with Gabs since Kristen herself once offered to give a formula of Rolf’s to wake John up from a coma if Marlena would talk Eric out of testifying against her in court. Poor Brady. That nose candy really killed some brain cells. He believes telling Kristen “No more lies,” will be a deterrent from her lying to him in the future.

Speculation: The fact that Kristen and Gabi were in each other’s orbit gave me pause. Maybe Rolf implanted Gabi’s eggs into Kristen and that’s how Mackenzie is Gabi’s daughter.

Julie’s little visit to Gabi was fun. I do wish we’d seen Julie admit that she was hurt by Gabi which would have added more to the scene.

Sarah: “What kind of person uses a baby as a bargaining chip?”

Eric, internally: Sami would. Sami absolutely has and would. #Days

Kayla and Stefano exchanged the same tired barbs from last week’s scenes in Thursday’s episode which sucked a few points of IQ out of my brain. I did like how Kayla manipulated Rolf into showing her his notes on how to plant a chip of someone’s essence into another person’s brain. That information will come in handy. I don’t have much to say about Stefano’s storyline this week except for it’s getting ridiculous. Stefano hated Marlena after she paralyzed him so the obsession is getting harder and harder to suspend disbelief for. I do like that Kate moved back into the mansion but with Chad as Stefano’s pawn, it’s going to spell disaster for her – and for Marlena.

It would have been more effective if she was trying to reach Steve. Instead, it was mostly Kayla telling Stevano he was delusional and crazy.

Those are my thoughts. Feel free to join the conversation with your rants and raves.

Evan about Jordan, “There was something off-beat about [Jordan] that I fell for.”
Sonny, “Off-beat? Is that a euphemism for clinically insane?”

Sonny, “Where were you hit?”
Ciara, “The bullet went into the wall.”
Will, “Thank goodness it didn’t hit one of Maggie’s figurines.”

Victor to Xander about Dr. Raynor, “She took the money. Has she no sense of decency?”

Shawn to Gina, “Hopefully it’ll show them how Rolf turned my mother into a homicidal windup doll.” 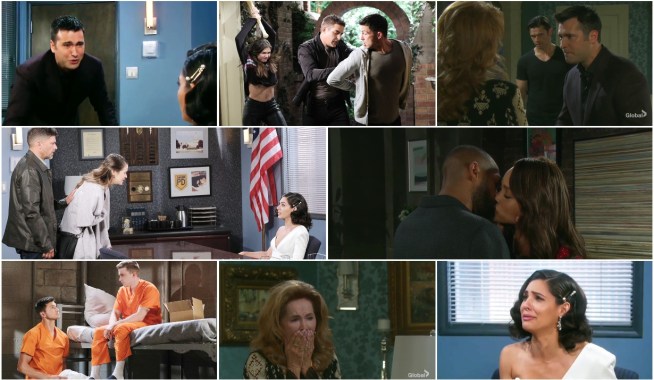 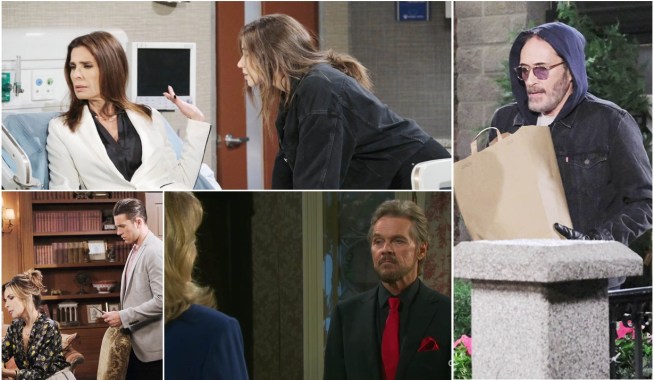