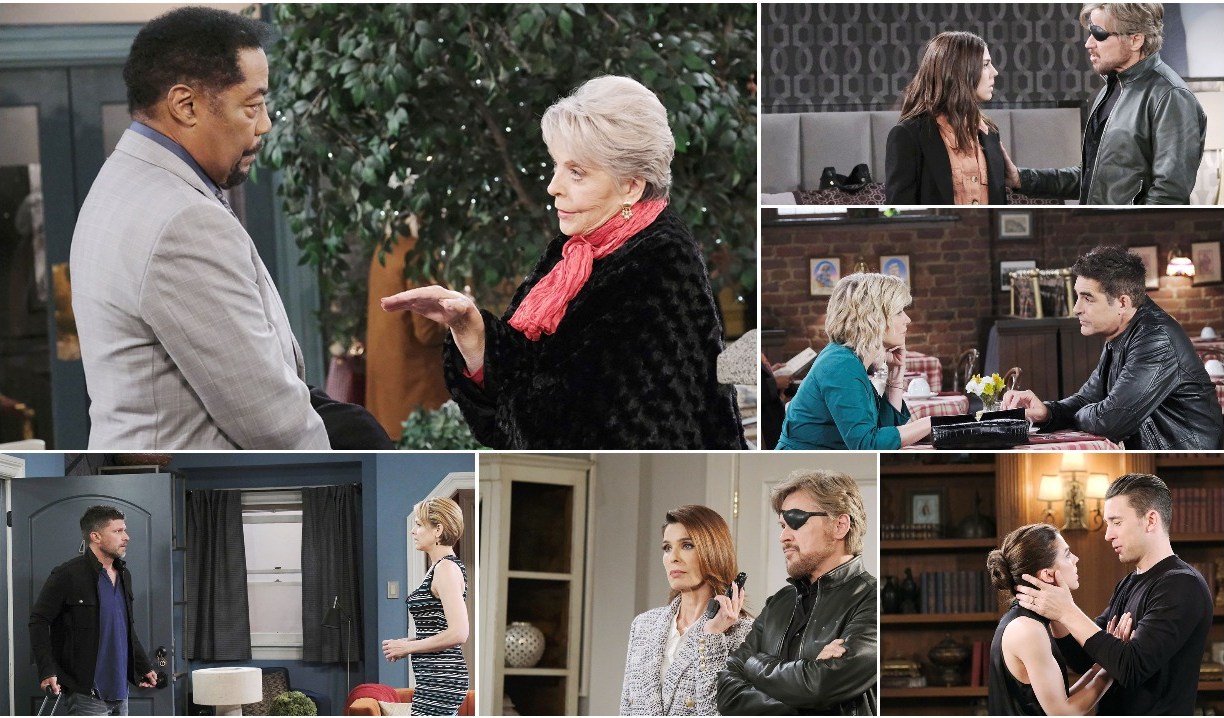 I’ve always seen of Days of our Lives’ Salem as an alternative universe, like the ones in superhero films. Their reality isn’t always parallel to ours. Case in point with there being capital punishment in Days’ Salem when it was abolished in 1928 in reality’s Salem. And various other crazy situations. Thinking this has made it easier to suspend disbelief and enjoy the show for entertainment for part of the audience. It’s not always easy. So often I read a lot of negativity and I’ve been there so today I’m challenging readers to come up with five positive things to say about Days. Post either in the comment section or on Facebook where I started this challenge:

A little bit of romance

Romance doesn’t have to be the standard flowers or chocolate or even whipped cream. We saw a different type of romance this week in Jack and Jennifer’s scenes. She remarked on writing her first article since coming out of her coma and when Jack read it, feared she’d become a target for Stefano and Rolf. His protectiveness was heartfelt, and his passion was swoon-worthy.

I enjoyed Stefano and Kristen’s scenes this week. They’ve chemistry. I teared up when Stefano bemoaned losing a grandchild and when Kristen sobbed over her realization that Steve really is Stefano. Their scenes made me able to suspend disbelief more than ever.

Our resident narcissists, Princess Gina and Stefano’s idea to “kill off” John and Marlena so they can have them to themselves is intriguing. How will this go down? Will Stefano put Marlena in a cage again? Will Rolf plant some sort of chip in John’s brain that’ll make him love Gina? Will it even go that far now that Abigail is in the mix? She may be the one to blow this whole thing out of the water. Oh and if you thought Gina and Stefano would really kill Jarlena you probably need to have your ‘soap card’ renewed. Or revoked!

Julie’s running around Salem talking Salemites into committing to each other like it’s February 14th and she’s Cupid. She told Eli to put a ring on her new “BFF” Gabi and then suggested Kayla pop the question to Justin. I guess when you’re in love you want to spread it around, but it was rather presumptuous to give such unsolicited advice. She was lucky nobody was offended! At least Kayla recognized that she’s not able to move on to that extent. But would Eli have proposed if Julie hadn’t intervened? I didn’t feel the proposal, though they did seem happy when they shared their news with Rafe. This movement in the story makes me wonder if Gabi’s secret will come out during their wedding.

Highlight: Julie telling Abe not to be offended before she shits all over his daughter, “Please don’t take this personally but your daughter’s history of hurting the people she’s supposed to care about the most, I’m afraid it was just a matter of time before she hurt you too.” That was entertaining and cringey. Never change, Julie.

I’m impressed that Julie managed to be THAT civil to Abe. As far as they know Lani left Eli at the alter then skipped town for no reason at all. Total fruitcake in my book!

Once again I hate to sound as if I respect nasty ole Clyde but I again felt his love, albeit twisted love, for his son. I felt his desperation to keep Ben alive by asking him to break out of prison. Maybe they should if Ben’s innocent. Hope did and that turned out well for her when she cleared her own name a few years ago. What I didn’t feel – Will telling Ben he wished he could trade places with him. Ridiculous! That sort of declaration is reserved for a loved one.

I’m not feeling Chad and Abigail’s return. All Chad thinks or talks about is “Father” and those DiMera shares. I’m glad Abigail’s new career is working out well but there isn’t enough balance for me to care that these two are still around. Perhaps if there was more of a balance and some more romance for them.

Between Will’s teary eyes and raised voice and Sonny’s look of shock, I was heartbroken for this couple divorcing when I’m not even a fan.

It was validating to see Rafe and Kayla talk about how strange Hope’s behaviour has been. In last week’s Deconstructing DOOL, I brought up Rafe’s firing and wasn’t disappointed that he was able to discuss it with someone, especially since Kayla remembered that Hope was in the room at the same time her patient’s cigarettes went missing. Wait until Roman weighs in.

I felt letdown that Eric and Sarah returned. We have a bloated cast as it is but these two and their storyline brings me down some. Nobody expected the chemo to work for Mackenzie since this is a soap opera. I’m guessing or hoping Xander will be a match for the bone marrow transplant.

Maggie yells at Victor and when he tells her not to nag him she yells, “I am not nagging you. I’m just trying to keep you from having another stroke!”

Kristen to Brady about Nicole, “There’s no way you’re going to settle for a dishrag like her when you can have me.”

Deconstructing DOOL: Who Caused the...