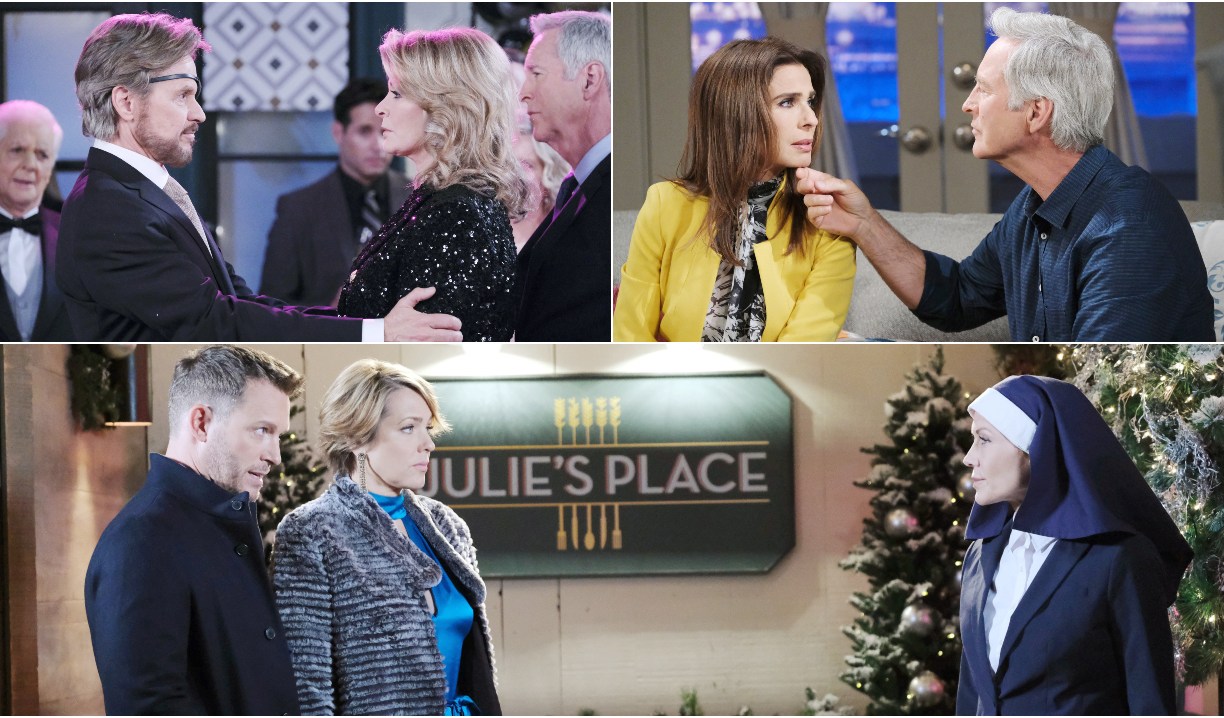 Days of our Lives still has that 90s vibe that I’m enjoying. There’s rarely a dull moment. I’ve been noticing a shift in how much longer some of the scenes are. It makes for more intimacy between characters and lets us in on their thoughts which is appreciated and something we were missing. Is it me or are there too many obsessive Salemites in town right now? Is there something in the water?

For the third year, Julie and Doug’s New Year’s Eve celebrations were crashed. I love how Chad wanted to leave early, knowing that something would happen. He hasn’t forgotten Eve and Jack’s return last year or the year prior with Vivian and Stefan’s appearance. This year, the most famous obsessive Stefano appeared as Steve along with Princess Gina, his sidekick, looking fashionable, while fixating over John. Salemites’ mouths dropped open at the return and John was the only one smiling widely while Marlena, Justin, and Kayla narrowed their eyes. Stevano couldn’t take his eyes off of his Queen of the Night and if he keeps that up along with all of the hints as to who he is, he’ll soon be caught. I’m curious as to how Hattie fits into this since she’s hanging about still. I wish they’d do something with her hair to distinguish her looks from Marlena’s more but I’m assuming again that it’s intentional. Last time in Deconstructing DOOL John & Marlena’s interlopers were discussed by Lori Wilson who stated that they didn’t need yet another interloper with Hattie. I think she forgot to knock on wood because now they’ve Stefano living there of all people. If Stevano didn’t like sharing a bathroom with Katarina, he’s certainly not going to be into sharing with Hattie Adams. Just the idea of it makes me shiver. Again I’m wondering how much of Stefano’s memories Rolf has given him back because though he’s fixating on his Queen of the Night as if it’s the 90s, he hasn’t once mentioned his latest son Stefan. Yet he knows who Hattie is.

I know Kate is working as a waitress because she’s tired of the cutthroat corporate world and not because she’s broke, but why on earth is she living above the pub? Where does she fit her extensive wardrobe?

Isn’t it blasphemy or something?

Lani and Kristen learned so much during their year at the convent. Lots for the nuns to take pride in such as how to steal nun’s habits, how to vandalize a storefront window, lessons in attacking Christmas decorations, and how to lie about taking your vows…When I saw the spoiler for Lani smashing the Gabi Chic window I cringed. It didn’t fit with who I saw Lani as and I worried that she’d become as obsessive as Kristen is but when I watched the scene, it made me feel her bitterness and I figured it foreshadowed what was coming for Gabs. It’s a good example of why not to rely on spoilers to guide us in our viewing habits! But I still have concerns that this story will go around in circles. Sending a potted plant through a boutique window is one way to take out your aggressions but I really just want Lani to steal Gabi’s cell phone or at least record her admitting to what she’s done.

Obsessive Kristen could have turned up on Brady’s door in a new not red dress, professed her love to Brady, told him she missed him and came to her senses and wants him back but 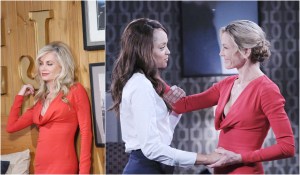 no. Instead, she let her emotions rule her actions and turned up in her favourite dress that we’ve seen too many times since 2017 and had a meltdown of epic proportions. She really should have listened to Lani but no. And then Nicole got into Brady and Kristen’s business when she should have stepped aside to let them argue as etiquette would dictate. I’m not sure why Brady would take Kristen back anyway because though Nicole should have kept her mouth shut or left, she was right. That long list of misdeeds is why Brady should run the other way. Though Kristen and Brady are hot together, she’s revealing her crazy like it was her first show at an art gallery.

Kayla’s reaction to seeing “Steve” at the New Year’s Eve party and hearing him admit he’s in love with another woman sure makes it appear as if she’s still in love with Steve. Sending Steve divorce papers when she only wanted to get his attention backfired. It was a bad idea anyway. I don’t see Stevano as a permanent fixture so think Stayla are likely still endgame.

#Days #Stayla Steve & Kayla first scene alone was everything I thought it would be. SN facial expressions when MBE touched him showed our Patch is in there. Such a powerful scene that Stevano had to yell he loved someone else. Kayla’s reaction says it all…. pic.twitter.com/I5RhepeTRd

Please feel free to share your thoughts on the short week in the comments.

Nicole to Kristen, “Wow, for a nun, you have one hell of a potty mouth.”
Kristen, “This is all your fault.”
Nicole, “You should have thought about the consequences when you stole my life.”

Stevano to Hattie, “You can bunk with Kate at the pub.”

Best lines from when I was on holiday:

Kate to Princess Gina, “Have you always been such an airhead?”What exactly are you princess of exactly? Hoboken? Perhaps it’s all the inbreeding that causes you to be such a moron.”

Kate to Gina, “You just bitch-slapped the wrong bitch.” 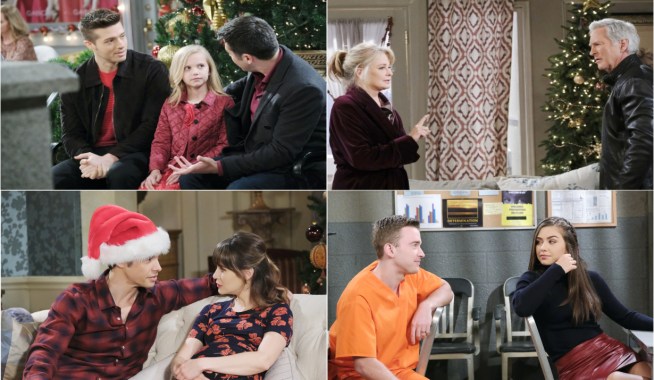 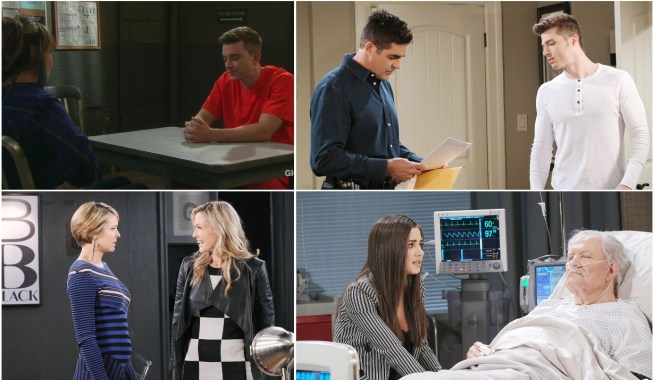