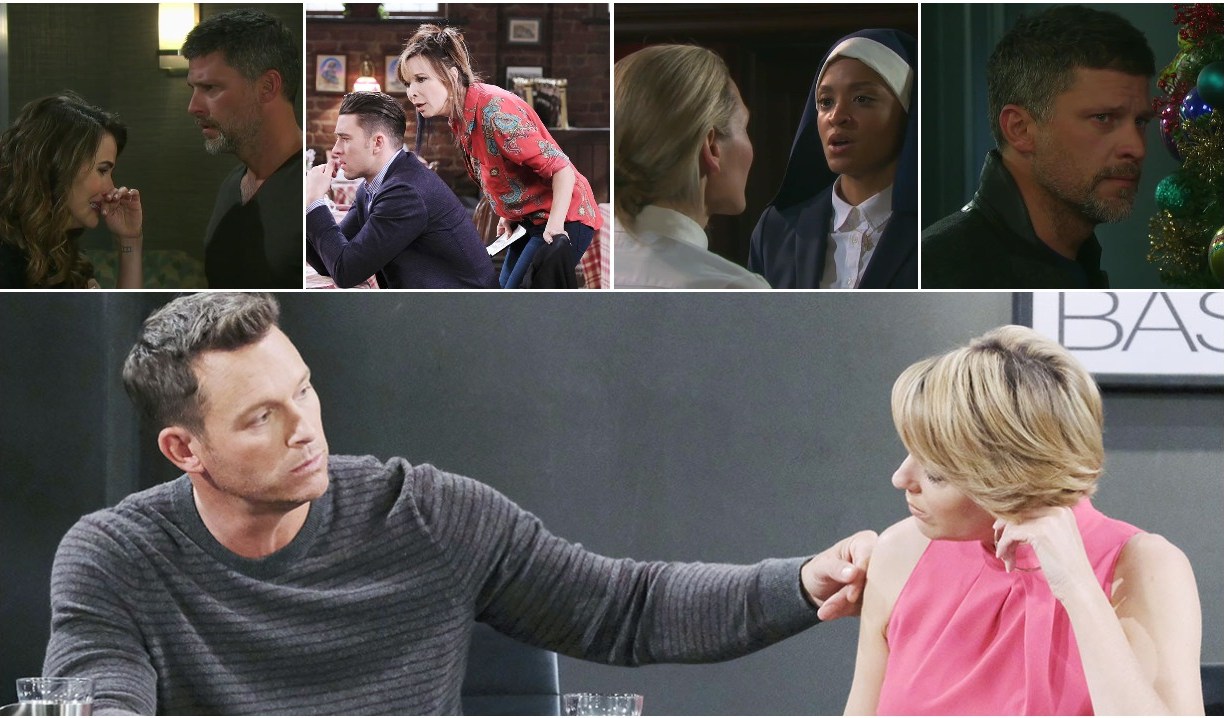 The week in Salem was filled with drama, business dealings, people jockeying for Gabi’s position at DiMera, Princess Gina worrying about Abigail’s interference, Kate’s big secret coming out, a tragic cancer storyline and we also saw a little romance between Jack and Jennifer this week as they celebrated their wedding, finally, once Jenn was released from the hospital. The show is on fire right now.

Is Gabi really a threat?

Between Gabi’s nostril-flaring and treating others like garbage including Eli and Kate, I’m a little wary of my Gabi’s bitter hag routine. I do prefer seeing her channel her bitterness into becoming a shrewd businesswoman but am having a difficult time seeing her as such. I miss the camaraderie Kate and Gabi once had and I think Gabs kind of owes Kate something after all Kate did to hide her crimes against Abby. With Kate being Arianna’s grandmother and Chad being Kate’s stepson, it’s another good reason for Gabi to keep her close in her fight against Chad for DiMera Enterprises. Not that I think those jockeying for Gabi’s position need to worry. Especially since a true DiMera should be able to take down a newbie like Gabs. Unless I’m underestimating her which is altogether possible.

We polled our readers and the majority voted that they wanted Chad as CEO. Even above Stevano.

Last time in Deconstructing DOOL I got into the convent storyline but this week, though the acting was terrific, I was preoccupied with wanting it to end. I’m not a fan of the so-called murder attempts. Usually, it’s Kristen waving a gun around and blathering on and on until you know she’s not going to pull the trigger. This week it was Shaky JJ. I couldn’t take him seriously. Though I’m glad for Kristen and Lani’s friendship, I found the show of solidarity and symbolism when the novices decided to remove their veils and ditch the convent forced and cheesy. But I appreciate the effort. But everything that they ran away from is still in Salem waiting. Lani needs to come clean, Brady already looks like he’s falling for Nic, but hopefully, JJ will gain clarity and realize that life does go on even when love is lost. Especially since he knew Haley for five minutes. Mean, mean, mean, right? My attention span for watching characters grieve just isn’t that long and gives me attitude after a while.

Steve sounded and reminded me so much of Joe Mascolo’s Stefano when he had that outburst Monday. My mum, who always had the hots for Stefano, is now into Steve! I’m even into Stevano and Kate’s scenes, as strange as that may be. But I feel for poor Chad who hasn’t learned yet that he can’t trust my Kate. Moreso now am I puzzled as to why Stefano is renewing his obsession with Marlena especially when he can have Kate who is obviously still willing.

Big question: Is Stefano getting rid of Princess Gina’s vanity important? Is he getting rid of all of her stuff as he grows tired of her? He didn’t even return her calls when she panicked on Friday’s episode when she realized the jig was up and her pushing Jenn off the balcony at the Bistro would be revealed. What a great cliffhanger, by the way. I can’t wait to watch Monday’s episode.

I love Justin, but I find it risky of Ciara and Ben to hire him as Ben’s new lawyer. You all know why…Maybe for once, Justin will get a win. Justin and Will’s run-in was unexpected and heartwarming. The acting was perfect for both Chandler Massey and Wally Kurth. I didn’t expect to tear up at the talk of family, love, and forgiveness. I also found it powerful watching Kate fight for Sonny and Will to hold on to their marriage. Sometimes those who are unlucky in love have the best advice.

On to those orange jumpsuits…I’ve heard grumblings from some who miss Will and Ben in their regular clothes. But hey, we at least got to see Will shirtless a few days ago. For those who are missing Will in regular clothing, I created a flashback to all of Will’s plaid looks over the last while. He’s only ever in plaid so I’m not sure what we’re missing here. I like him best in blue or plumb and am dying for the wardrobe team to put him in other more form-fitting shirts to show off his new muscles once he’s out of the pokey.

Cancer is horrible enough but when it’s a child it’s even more heartbreaking. And to top it off, we get more sadness from Eric. I don’t think it’s the best thing for a baby to be separated from the only father she knows but considering Xander almost killed Marlena and has never even expressed sorrow for doing so, I’m not sure I can or should blame Eeyore Eric for wanting to keep Xander away from his kid. But I want to because just like most fans, I find his sanctimonious hypocritical act annoying. But he did say that Mickey was the most important thing that matters and that the past doesn’t matter. If he believes this, shouldn’t he let Xander comfort their daughter at least supervised? I loved Eric and Nicole’s no-holds-barred discussion when Eric told Nicole he was leaving for Boston to take the baby for cancer treatment. Between Eric calling Nicole out on never changing (which I disagree with to some extent) and dumping him for 5 million dollars and her retaliation that she forgave him for killing Daniel, I figure either their relationship could be strengthened by the outburst or they’re truly and finally done. But I don’t think they are. This is still fresh for Eric and Nic needs to give him time.

Dare I say that generally when a child is sick on a soap it’s for some bigger reason. Either to get a couple together or to reveal a baby twist. I’m thinking we’re about to get a baby twist.

“Why did you give the baby cancer?” — Voicemail from Dad #days

I’m tired of Eric crying, too. But, Nicole died. Then, Holly “died” and “Nicole” blamed him. Now, his new daughter has cancer. I don’t know what else he’s supposed to do but cry #days

Marlena has every right to be rude to and not like Xander. He shot her and almost killed her and has done so many awful things to her son. Which speaking of her son Eric also has the right to hate Xander. #Days

Kayla, “I love you.”
Justin, “Is it the dimples?”
Kayla, “They are irresistible.”

Justin to Will, “You’re a part of our family for better or worse.”

Eric, “In the 20 years since I’ve known you, you haven’t changed. You dumped me for Lucas and five million dollars.”
Nicole, “Sitting in judgment is God’s job and that’s how I forgave you after you killed Daniel. Who is to say you can’t forgive me?” 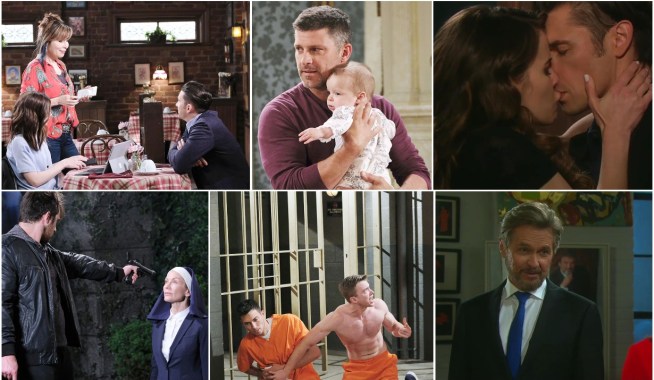 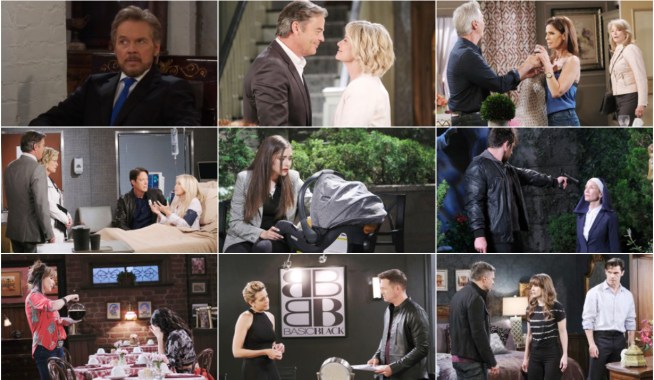