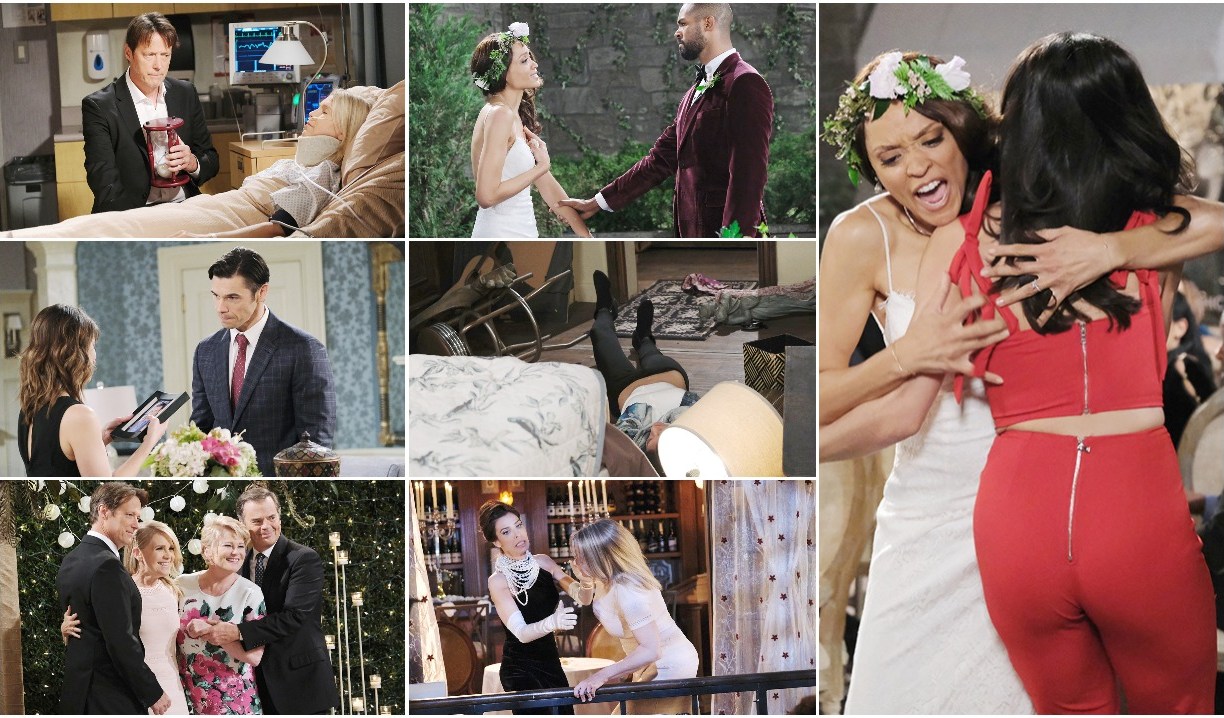 Today marked the beginning of something that hasn’t been written for soap operas ever. A time jump of a year into the future. It also marked Days of our Lives’ 54th Anniversary. This is a bold move for soaps especially since much of the audience doesn’t like change. So far I appreciated how they fast-forwarded a year in the future, while the rest of the storylines were wrapped up in this timeline of today. I think this could give us more surprises and possibly more viewers needing to tune in since the biggest issue with Days is that they tape so far in advance that we all know what’s coming. It might be a brilliant way to keep our show going.

Three weddings in one week must be an original soap opera record. Some highlights included gin-soaked Eve and basically all of the Eve scenes. I felt for her. Roman’s right. Eve is her own worst enemy. Did anyone else gasp aloud when JJ told her she was too old to have children? Ouch! It hurt but was refreshing to hear a character say what many are thinking. Abe soothing Lani at Salem Inn was as heart-warming as it gets. And I loved the exceptional writing for siblings, Adrienne and Jack, who played Rock, Paper, Scissors to decide who got married during Tuesday’s episode. It balanced nicely with the devastation from the first wedding bringing in realism and light fun.

It turns out that while I said I no longer felt invested in couples because of lack of writing for them, the show dragged me back in with Eli and Lani’s wedding fiasco. Solid acting meant I was bereft when Lani cried as she dumped Eli and lied about the reason, and when Eli fell apart. Oh. My. Heart. But I still laughed aloud while watching Xander’s face in this scene!

I love that everyone is horrified… except Xander. 🤣 #Days pic.twitter.com/BkIeookonr

Princess Gina tried to get rid of Jennifer three times, without success. Gina seemed genuinely upset that she attempted to murder Jenn the first time because “I am not a violent person,” but that didn’t stop her from trying to smother Jenn twice, hours later. Gina’s a complex princess. Someone should explain to her that the British use contractions.

Last week in Deconstructing DOOL I called Gabi mini-Kate and found it dumb and frustrating that instead of constantly flashing back to Gabi’s threats that Lani wasn’t fantasizing about punching Gabi in the gut but she surprised us this week with that fantasy at the wedding where the women fought over Gabi’s cell phone and then later, Lani finally got a little payback and sucker-punched Gabs. Hilarious!

Gabi’s not a villainess?

Some viewers are arguing over whether or not Gabi should be seen as a villainess. I say call her what you will. I use the word loosely. Either way, it gives me a chuckle to see so many viewers shocked at how far Gabi’s gone, how “evil” she’s become when Kate, Stefano, and Vivian have taken their vendettas way further than this. Like they’re supposed to since they’re irrational and ridiculous. We do need a “bad girl” in Gabi’s age group especially since Sami’s older and MIA and Nicole’s lost her edge along with the sentence, “I’ll have a martini” from her vocabulary. Dating the Morality Police will do that.

Kristen did a good deed?

In a shocking turn, Eric learned that Sarah’s pregnant with his child before the time jump. From Kristen of all people. I’m torn between thinking that Kristen does want to be a better person for Brady, since she used to be good, and thinking she only wants to score points with Brady. Either way, it worked. But then Brady’s so easy.

I hesitate to even discuss this story because this isn’t the platform for spoilers. But the photo I used in my recap Friday was of Jordan, not Ciara, though they were dressed the same. I’m not sure what that means since we’re going to be in the dark somewhat going forth with the time jump. Which may I add I love. What we do know –  either Jordan or Victor or someone else is or was trying to set Ben up by breaking into the gatehouse and leaving the window open to make Ben wonder if he was missing a chunk of time. But who? Jordan? And did Ciara catch her and kill her in self-defense or did Ben somehow between leaving his place and showing up at the hospital? Could it have been Jordan’s baby daddy? Or Clyde? And who was watching Ben from outside his door? I can’t wait for next week!

Love to hear your thoughts on this week’s episodes and the time jump.

Eric to Kristen in the chapel, “You aren’t scared you’re going to be struck by lightning being in here?”
Eve to Roman, “I don’t like this bar and I’m never coming back.”
Roman, “Promise?”

Xander about Kristen having spotting, “Maybe it’s nature taking its course.”
Brady, “What does that mean?”
Xander, “Kristen’s a bit long in the tooth to be having a baby.”

Sarah to Nicole, “Are you that insecure?”
Nicole, “Yes.”

Deconstructing DOOL: What the Blank...