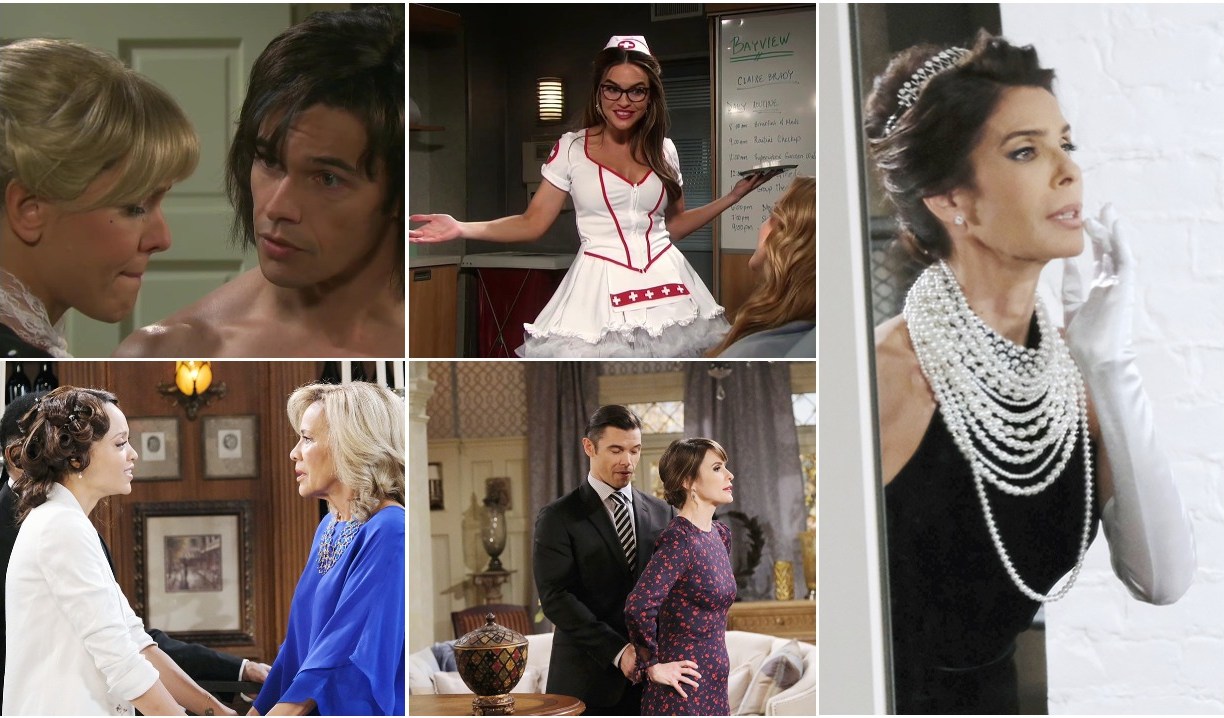 Halloween focused prominently on Days of our Lives this week with trick-or-treaters and that crazy Halloween episode which was full of cheese. We also saw the beginning of Lani and Eli’s wedding day which was bittersweet…

Last week in Deconstructing DOOL I loved how creative the booby-trapped heart story is. I’m still enjoying the drama. Gabs is crazier than ever. I thought of her as a mini-Kate though some are calling her the next Sami. I can’t help but bark out a laugh every time she mentions the fact that her husband is dead which is every five minutes. It’s going to get old pretty fast if it hasn’t already for some. Not everyone is suspending disbelief. Lani could have grabbed Gabi’s cell phone at any point and turned off the app, arrested Gabi and told Kayla to switch the pacemaker with another. Lani could have come clean with Eli too. She hasn’t even fantasized about any of this! It’s a little dumb. I don’t have much to say on Eli and Lani’s bittersweet wedding since it only began Friday though so far Princess Gina was the highlight for me.

Looking down her nose

It was a nice random surprise to see Marlena and John interacting with Haley about “Hope” smoking cigarettes. I didn’t even know they knew one another. Marlena’s like your stuffy old maiden aunt who would cuff you across the head if you deigned to step foot inside the sitting room with your shoes on or use the wrong fork at dinner. She’s is absolutely disgusted by smoking. She found the crushed cigarette butt on the ground an abomination. She sniffed, “Smoking, what a disgusting habit and then to toss it on the ground. Who would do such a thing?” I know Salem’s a small town but surely she’s seen this countless times in the past! Then when Gina dropped by, Marlena wanted to look in her purse. I gasped aloud, appalled and said to myself, “Who would do such a thing?” I like how it’s so completely out of character for Hope to smoke let alone wear that red shade of lipstick that has her family and friends gossiping – very realistic. But since they already know that Hope has a doppelganger, how is it that nobody has automatically wondered if she’s Princess Gina? How dumb are these people?

Turning in his villain card is a turn off

I appreciated how EJ and Sami, a villain and a bad girl, loved each other for who they were and didn’t try to change themselves entirely for love. Xander’s our new villain panting after Sarah and within weeks he has turned in his villain card for a woman who can be such a wet blanket. He tries way too hard which has lessened his sex appeal for me.

When Xander and Nicole were at each other’s throats in the past it showcased wicked chemistry. These two could have been the next Ejami but Days of our Lives has ignored this potential pairing in favour of turning my Nicole into a shell of her former bad girl glory to pair her with hot yet exceedingly boring do-gooder Eric.

Maybe the time jump will jumpstart this story.

No aptitude for revenge

Jordan’s not only demented but she lacks proper revenge skills. It’s embarrassing. She should have gone to Kate and Gabi for pointers. I did find it amusing that Jordan’s not exactly lying when she says she’s worried about what will happen to Ciara next. She’s worried alright. Worried that whatever plans she has to kill her next will be thwarted again. Did anyone else suspect that Ben didn’t lose Jordan, that he made a pact to let her go if she gave him David?

As usual, Halloween in Salem was full of craziness, murder, and mayhem. It was cheesy, all over the place the way any nightmare is and made no sense. Seven murders made my head spin and though it was fun at times, it was really…weird. I loved seeing the children trick-or-treat but I admit I rolled my eyes more than once at the forced references to past storylines.

I never knew how badly I needed to see John and Marlena’s great-granddaughter trick or treat at their house. What a great day! #days #jarlena

By now everyone should know that starting November 8, Days will jump an entire year in their storylines. Most have mixed feelings about this. I’m trying to reserve judgment until it begins but can’t help but be worried it’ll be too confusing and that the show will lose viewership. Hopefully our concerns are unfounded and that it’s fabulous.

Love to hear your thoughts on this week’s Salem Shenanigans.

Eric to Xander, “I’ll take over candy duty until you can put some clothes on.”
Xander to Eric, “Turning you on, am I?”

Princess Gina, “What is my dismal doppelganger up to? I hear she’s penniless and alone.”

Princess Gina, “I never understood his (John’s) attraction to that commoner (Marlena).”

Claire asks Victor if she can be in Titan’s Executive Training Program and Victor says, “Well we didn’t think you’d be eligible being in the bin and all.”

Posted 43 mins ago
Posted on: TVLine