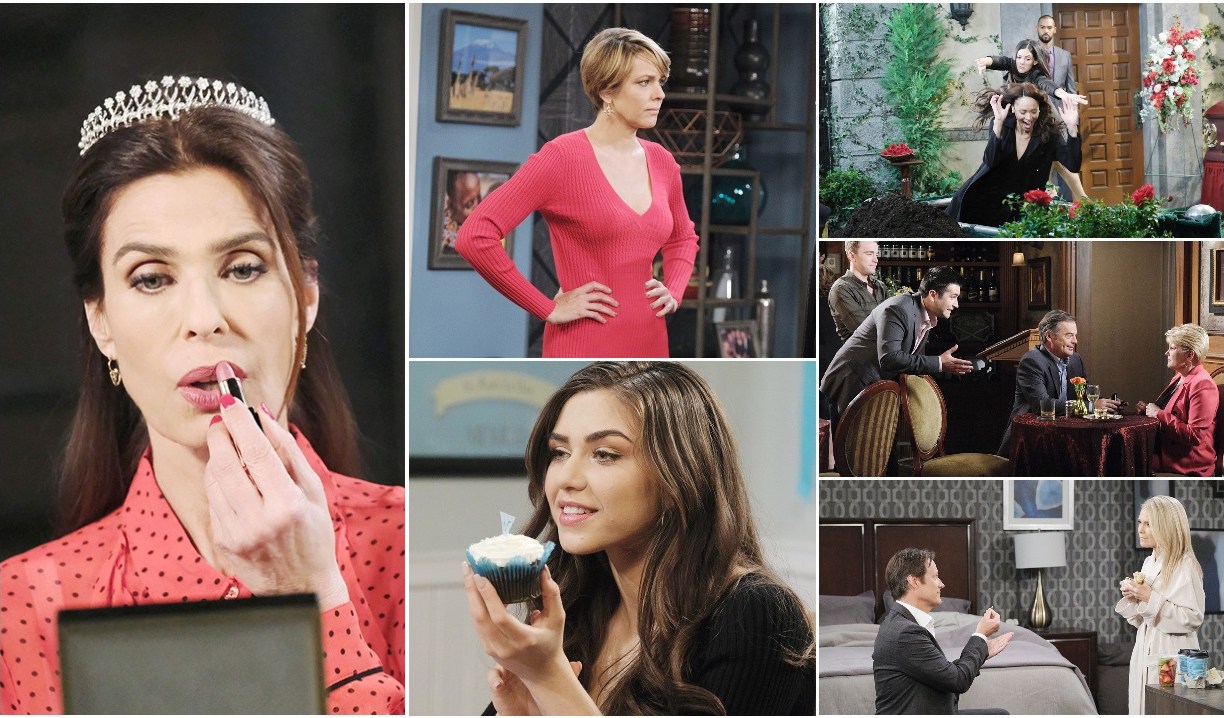 This week Days of our Lives flaunted old-school goodness with a heavy and welcomed focus on love and romance to balance the secrets, lies, blackmail and attempted murder. Victor was at his hilarious worst with his best dialogue and Princess Gina began her subtle intriguing return. Plus, that gorgeous new set in The Bistro was a hit.

Lori Wilson talked last week in Deconstructing DOOL about Jack making amends to Abe, which I agree was a positive step. This week I loved Jack’s continued heartfelt apologies and found Haley was very gracious when she accepted hers readily, but it made me rage a little when she and Adrienne said Jack wasn’t responsible for his own behaviour as an amnesiac. I mean he wasn’t a pod person. Not everyone is ready to accept his apology. Not everyone is a fan of Jack’s but those who are loved his fun and original proposal to Jennifer. It seemed oddly natural for Jenn to eat a muffin while he proposed.

I don’t buy Jack and his stupid apologies. Just take your memories and go #days

We haven’t seen Justin and Adrienne in months so having them pop up out of nowhere was bizarre and foreshadows tragedy. Having Sonny lean over Justin’s chair and coach him through his marriage proposal to his mother was both cringy AF and cute. The scene was sweet, loving and tender but two proposals in one week is a bad omen, I tell ya. All this happiness is wonderful and appreciated but I know a calm before the storm when I see one.

Can we dump Doug’s Place and keep The Bistro? It’s much classier and cozier.

Most of the audience including me have expressed issues with the Princess Gina storylines and Kristian Alfonso’s accent over the years but so far this time around the return of Princess Gina has been so subtle and provocative that I am really into it. Kristian Alfonso’s doing a great job of portraying normal and confused Hope and carefree Princess Gina drinking bargain-basement champers and littering cigarette butts on pub property as if it was the 90s. But why is Gina mooning over Stefano’s portrait?

Jennifer and Kayla sure didn’t mind lending Dr. Rolf the lab to scare up some return-from-the-dead potion for Jack but as soon as Jack’s memory returned, Kayla gave him the boot and Jennifer stole his flash drive and treated him like the cigarette under Gina’s pump. Wouldn’t it have had more impact if they still felt grateful to the mad scientist before Jenn Jenn stumbled upon Rolf’s Princess Gina files in his flash drive? And how about Will and Sonny treating Rolfie like garbage? How ungrateful – if it wasn’t for Rolf Zombie Will wouldn’t be alive to smirk another day.

There’s a lot of grief and a lot of revenge (griefenge) on our show but this time I at least love how creative Gabi’s revenge plot is. It reminds me of Stefano implanting the chip into Vivian’s tooth in the 90s. But is it just me or are they dumbing down Eli so that he doesn’t see Gabi’s passive-aggressiveness toward his fiancée?

I’m still team drama (I like both Gabi and Lani) but I did laugh myself silly seeing Gabi fantasize about shoving poor Lani into the grave. I’m sure Lani could tell the “authorities” what Gabs is up to and Kayla could switch the pacemaker with a new one behind Gabi’s back to shut this revenge-fest down fast but I’m not betting on it happening.

Should Nicole be worried?

Sarah’s been on repeat the past few weeks chanting, “Eric can’t find out I’m having his baby,” as if she’s keeping a cancer diagnosis from him. While I say let the chips fall where they may, Nicole disagrees. She’s backslid into her old ways keeping secrets and lying to her beau but without a martini in hand. Sure, this will backfire, but I may be siding with Nicole’s concern. Eric’s religious and conservative background could have him dumping Nic and marrying Sarah and I’m not sure anybody wants that.

Some of us are still wondering who Jordan’s baby daddy is. Some wonder if David’s even Jordan’s biological son but with the possibility of Philip Kiriakis returning it’s more likely it’s his kid. Unless it’s Rex’s. I asked on Twitter if people thought I was horrible for laughing about Arianna gave Ciara’s cupcake to Baby David. It turns out I wasn’t the only one laughing. That whole scene was hysterical. A highlight of the week. It played out so creepy and shocking and the look on Jordan’s face was priceless. All in all, Jordan’s plan to poison Ciara blew up in her face which made me laugh even more. With Rafe eating the poisoned cupcake, I’m wondering how fast Ciara and Ben will find the planted vial and figure out Jordan’s plot and send her back to Bayview!

Am I a horrible person because I laughed aloud that Arianna gave Ciara’s cupcake to Baby David? #DAYS #IDontWantDavidtoDie pic.twitter.com/VikMozpOm7

Tell me your thoughts on this week’s Salem Shenanigans.

Kristen hands Victor an ultrasound photo, “What is this, a pictorial representation of your soul, a black and dark abyss? A morass of sin and darkness?”

Victor about Kristen, “I think she’s having the vapors. Does anyone have any smelling salts?”

Rolf to Princess Gina, “Welcome back from exile, your royal highness.”