Deconstructing DOOL: Claire’s Goodbye Was Like an 80s Afterschool Special 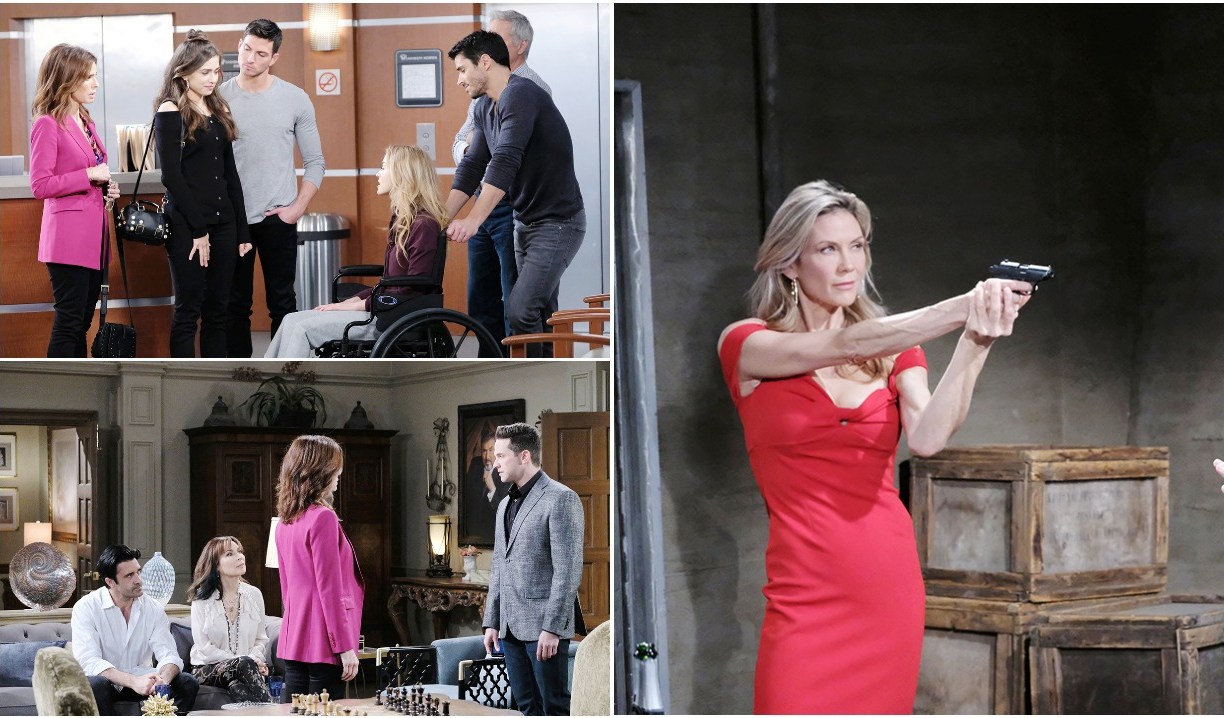 People were behaving badly as usual, on Days of our Lives this week as we expect them to! There were a few scenes that made us raise an eyebrow such as Sarah marrying Rex and the next day trying to make out with his brother the ex-priest, in a chapel, after praying to God. Just another Monday… Then Haley tried knocking on the door of the loft and when nobody answered, she did what anyone would do and broke in through the window. You know, because texting or calling in advance to ask if one can visit is so inconvenient. We saw the end of Claire’s big pyro storyline, missed a touching scene between Victor and Ciara and Kristen finally decided enough was enough and revealed herself.

The theme of the week – threats

Hope was a good (ex-)detective this week. I was reminded of how much I used to like her, even when she was dragging Eli to the dark side, asking how he felt about unofficial police work, I was into it. I just can’t understand for the life of me why Eli stays working at SPD. I had hoped that these two working together meant that Kristen would be caught soon. I’m at my wits end with her special brand of crazy, but she obviously made a deal to spare Ted and Kate’s lives if they lied about who Xander’s partner is. I feel for Xander and Stefan and am curious about how they’re going to get out of this mess. Xander has dirt on Kristen. It’s time he used it and got out from under her thumb because if I have to take sides, it’s Team Xandy all the way.

I wasn’t a fan of how Claire’s last day played out which was a shame since in Friday’s Deconstructing DOOL I touted the end of the psycho story. This week for me, took a turn. Nobody forced Claire to set those fires and try to murder people yet everyone blamed Eve and Claire didn’t even have to stand trial. I guess it’s easier to delude themselves than facing the truth that Claire would have caused all of that pain even without Eve’s manipulations. Eve should be punished for keeping quiet about Claire the pyro, but I doubt it’ll happen since stupid Marlena gave her the ammunition to get rid of Claire’s cell phone with the incriminating evidence on it. It’d have worked better for me and added a touch of reality if Ciara was angry at least to some degree at Claire, not just Eve. Forgiveness takes time and because this was so rushed, it played out and wrapped like an 80s afterschool special with Ciara not only forgiving Claire but wanting to be BFFs – something that never happened on canvas anyway. The only highlight was Ben sharing a bit of sage advice from one mentally ill person to another before Claire worrying about her stupid social media following nearly gave me a frigging brain aneurysm. I was glad she at least apologized to Tripp and Haley but could have done without Haley’s crocodile tears which were predictably over-the-top and annoying.

Ciara runs through a litany of excuses to justify Claire trying to kill her. Makes sense to me. #DAYS 🤪

Eve’s actions would have been more sympathetic if they hadn’t done the MAGA stuff. Trying to avenge your dead daughter? Understandable. Racism? Will make the audience love the town and a serial killer verbally curb stomping you. #Days

Victor’s heart may be in the right place…

Victor seems to have good intentions where his family is concerned but he usually needs someone to get him on the right track. Nobody was around when Vic tried to get all the alcohol out of the house for Maggie’s sake. It was sweet and something that never happens in soaps, but the big dufus hid a bottle under the sofa instead of in a locked cupboard! I knew this was going to come back to haunt him. Poor Maggie found it and almost fell off the wagon again. Vic again showed compassion when he told John he could gas up the jet and get Claire out of the country within an hour. It was both sweet and horrifically irresponsible! It’s a good thing John reminded him the woman needs help. It really amazed some viewers that Claire got what was seen as the royal treatment for almost murdering three people, yet people are still hating on Ben for what he did and they both have mental illnesses! That’s called the Horton/Brady privilege!

“I mean she could’ve killed Tripp Dalton and Haley Chen too.” #Days pic.twitter.com/0UFCidzWcF

Scenes are always cut from TV and movies but his week Victor and Ciara’s touching moment was cut rather than Kristen/Nicole babbling about the same old shit. Here’s what we missed:

This is my opinion – I realize I left out some bits from Friday’s episode which I enjoyed, but you don’t need to read a book. Still – I’d love to hear yours!

Victor to John, “Listen, I got a bottle of bourbon hidden under the sofa. Would you get it for me?”