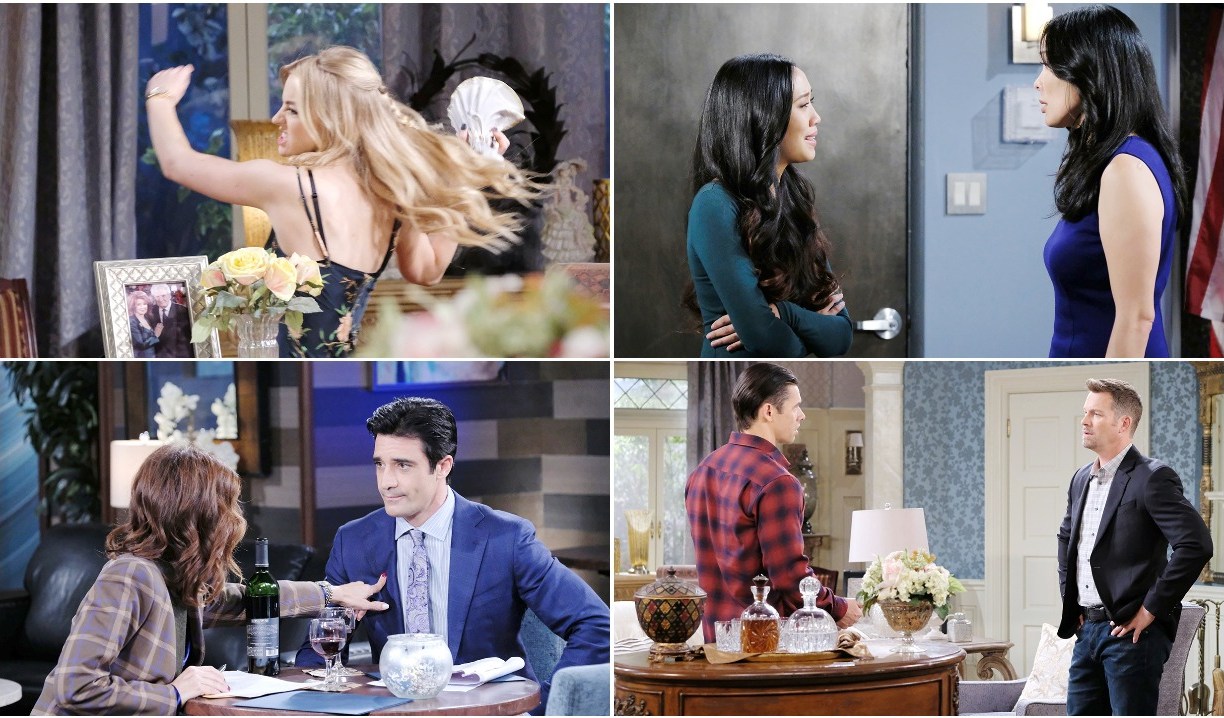 Last Friday in Deconstructing DOOL, I commented on how sweeps started out so bleak. This week things became downright morose. I knocked around using this as a working title: ‘Anyone Watching Requires Antidepressants’. But by Wednesday the storylines either picked up or climaxed. Sure, there was a lot of sobbing and consoling going on but many fans, even those who aren’t into violence, cheered JJ on for knocking his father to the ground, Rafe and Hope finally ended their long-suffering marriage, it was confirmed that Haley is really Melinda’s daughter – something we assumed, Claire was forced to confess to some of her secrets, and the highlight that had me laughing aloud was Claire smashing Maggie’s prized figurines. Maggie’s going to cry her heart out when she finds out…

Salem’s got a new mayor

For a storyline that most viewers loathed, I found the ending surprisingly anticlimactic. In the worst twist ever, Jack’s Salem’s new mayor. I liked that Jack fired Hope and I also loved Hope’s indifferent reaction – the smirk. It was oddly satisfying that our mean, mean, mean Ted gave up his job in solidarity. What I don’t like is who the next Police Commissioner will be…We thought the immigration story was bad. These are trying times coming, my friends. The one silver lining was Abe talking to dearly departed Lexi about this farce.

What was that, wishful thinking?

Maybe Hope was drunk when she weaved the story to Ted about how she and Rafe were always so supportive of each other because that was one of their biggest issues. That, lack of trust, and being on two different wavelengths. They had their moments but I think this divorce could be best for both parties. I am sorry for their fans. I know what it’s like to lose a couple and right now, there are so few to root for that this must hurt even more.

As much as I love that bitch Melinda Trask, she’s right. She most certainly did not do everything she could to keep her sister-daughter in the country. So while I can see that she is saddened by Haley’s deportation I can’t relate to shame playing a part. Sister or daughter, they should have applied for a green card when she got to Salem. It’s not as if she didn’t know the law. Though at the heart of it, I’m team Haley, I agree with Jennifer. Mel and Haley can’t exactly blame those cretins, Jack or Eve for their own mess.

I felt a bit surprised that John Black isn’t Haley’s father. I mean he’s everyone else’s father. And I’m already bored that JJ and Haley are on the run. This can’t end well.

Marlena stopped by Eric Eeyore’s place and told him he should consider moving on from Nicole to Sarah, and then when he questioned her she backtracked and said she thought they should “just be honest with each other.” Um did she forget that Sarah already told her they were honest with each other? What’s the point now? Wouldn’t it be best if he focuses on what appears to be clinical depression rather than one of the many babes who find him attractive? Many fans were affronted that Marlena compared her love for Roman and John back in the day to Eric and Sarah’s flirtation. I understand the reaction but found it relative. It’s always helpful when your parents can relate to you. But I’d be happier if Marlena would stop propping all of these relationships.

Sarah going to Nicole to talk up Eric was another stupid move and so cringey. It’s also not her place.

Marlena I love you, but I know you didn’t just compare Eric and Sarah to you and John. 😐 #days

Ciara’s now pushing Ben to gain access to David, but I couldn’t tell if Ben cares to the extent that she seems to. So off she went to Lani to ask if her boyfriend could see his nephew. Just crossed right over that boundary. It gave me second-hand embarrassment and that doubled when Lani lied to Ciara about David having a fever in order to get rid of her. Lani really is too invested in someone else’s kid and Ciara needs to let her boyfriend fight his own battles. My own thoughts – I see no problem with Ben getting supervised visitation rights. I did see a problem with Ciara comforting who Dustin’s now referring to as “crazypants” Claire over her break-up with Tripp. Wait til Ciara learns who set that cabin fire! Ack.

Finally into the family fold

I’m glad that Brady made Xander an executive at Titan though Kate, Victor and I aren’t sure he’s qualified. Heck, Victor’s not sure he’s qualified to take out the garbage. We need a new permanent villain to take over for Victor when John Aniston retires. Regarding Xander revealing his partner is Nicole, I still maintain that she must be Kristen in a Faison Nicole mask. Unless Xander pulled a Stefan and brainwashed her. It’s intriguing to consider the possibilities but at the same time, I feel robbed of what should have been a better return for my Nic. What if Kristen really is Nic and Nic’s really dead?

More: Xander, the villain Days of our Lives needs

Xander is a true STAR. The show needs to really nurture him into a new Victor. They also need to flesh out Ciara more. The Veterans will soon be too old to carry the show. #DAYS https://t.co/CPo11agmI4

JJ to Jack, “I hate you. You’re a worthless, pathetic excuse for a man.”

Agent Smith to Haley, “Well, well, well, look who turned out to be a naughty little liar.”

Hope, “Haley’s with an ICE agent.”
Melinda, “Does she have a lawyer?”
Hope, “Yes, Justin Kiriakis.”
Melinda, “I meant a competent one.”

Victor, “Why did you hire that blood-sucking leech to work for Titan?”

Victor to Kate, “We’re stuck with that worthless maggot.”

Victor to Kate, “Would you be so kind as to fetch me my gun?”

Deconstructing DOOL: Things Can Only...