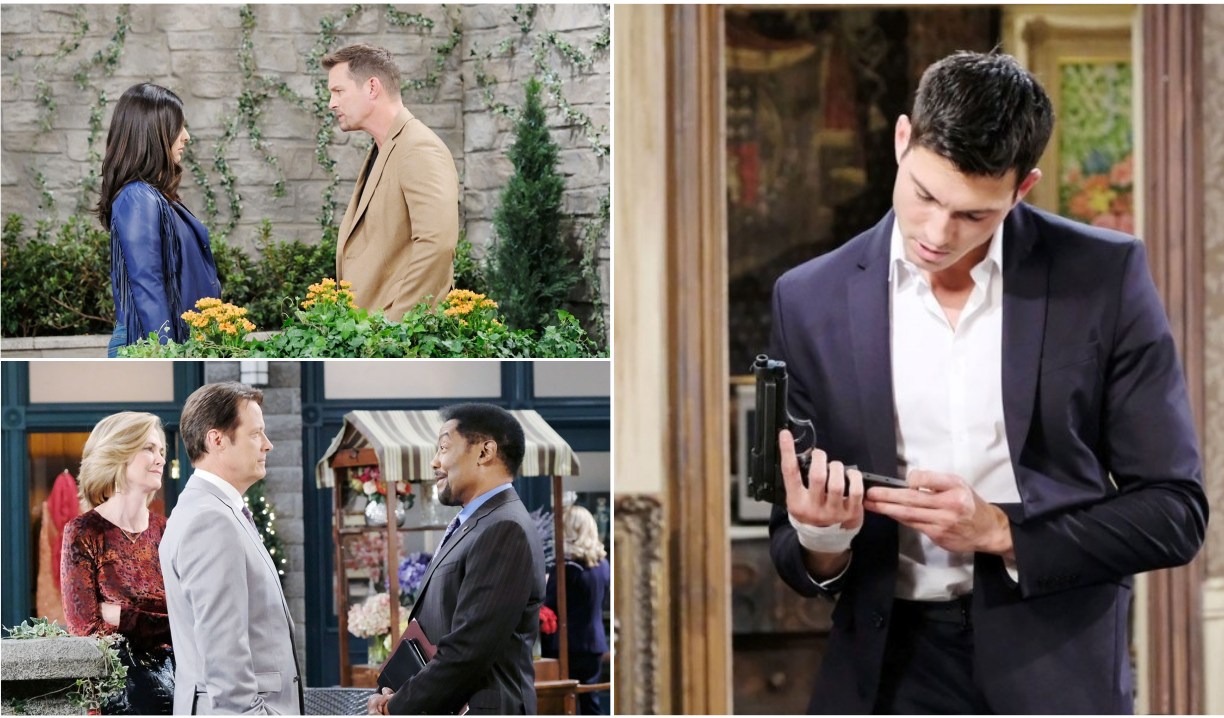 Last Friday in Deconstructing DOOL, I admitted I was bored with the storylines. This is the second week feeling the same only this time I’m annoyed. It pains me to say so but pained me more to watch. It was the week of the drop-ins. Maggie, Victor, Melinda dropped in to make appearances and I guess help further the storylines, but essentially didn’t do much. And Jordan’s lullaby song was straight from some obscure film from the 1940s that I found eye-roll inducing. Basically, there’s not a single storyline that I’m interested in on Days of our Lives right now.

Maggie’s mouth was as big as her hair this week when she yapped off and cried at Rex’s place of work, about him being a serial cheater. I’m not siding with Rex but she was a little out of line to have spilled as much as she did. Sarah’s an adult. If Maggie’s always cleaning up after her mistakes, how is she going to learn from them?

Brady wants Gabi to seduce Stefan, marry him and then take him for everything he’s got which is a direct repeat of what we saw Brady do to Eve on Days last year almost to the day. Nobody wants to see this. Nobody wanted to watch it the first time. And it’s worse this time since it reminded us that Stefan’s a rapist. Brady asked a woman to seduce a rapist. Let that sink in. Why does romance on this show always have to start out like this? Why not see Gabi and Stefan’s chemistry as a gift, an easy way to create a couple and attempt to forget the rapey past? This isn’t what women want to watch. Stefan’s as obsessive as his father was and I hope Chloe sees it soon. I assume that if she didn’t have kids, Stefan wouldn’t be interested in her. Now I’m even more convinced that he set El Fideo’s men on her so he could be her White Knight. Especially after realizing he kept the police out of the loop.

I understood Hope’s laughter after hearing that Rafe’s going to fly out to California to get Jordan’s baby and bring him back. She couldn’t believe her husband was leaving her once again to tend to yet another ex. But I can’t help but admire his kindness toward Jordan and Sami. And I find Hope hypocritical. She knew Ted the opportunist was into her and has been allowing him to practically drape himself all over her for months and kiss her while her husband has suffered. Makes it easy to see why Rafe keeps taking off! I wasn’t into Hope and Ted until I saw that kiss. Sure Hope was cheating and I’m not condoning it but it was really tender and hot. I was into it.

Claire’s painful insecurity is as annoyingly heartbreaking as it is frightening. It’s also frightening to see Eve manipulate Claire and then suddenly attempt to play mama. While I agreed that Haley should have given Tripp a heads up that Eve and Jack were suspicious of them and dropped by the loft, I didn’t think Tripp needed to rush off to hold Haley’s hand over it. This damsel in distress routine is getting old. Haley sure doesn’t take after Melinda. Speaking of which, I liked that Melinda finally dropped by to see how her sister was doing but there seemed to be no point to it if only to villainize her in Tripp’s mind. Why didn’t Melinda try to help her more now that she’s no longer DA or in the mayoral race?

What happened to my Ciara?

Again Ciara’s double standard for mentally ill patients was astounding. In front of her mentally ill boyfriend, she told her mama she “can’t take the word of a crazy woman over Ben’s” when Jordan claimed not to have set the cabin fire. Um, Ben’s “crazy” too. And even more bizarre than that, Ben just stood there and took it because he has zero self-esteem. Poor guy! How does Ciara see Jordan as “crazy” but defends Ben the serial killer who now owns a gun? If Ben goes off his meds he’ll be wringing her neck in a heartbeat. That’s the reality of this. Ciara has changed and I’m not a fan of the change. She went from badass motorbike babe to a needy harpy.

More: Your vote counts in the 13th Sudzies Awards

I can’t wait for this storyline to end…It was shocking to see Abe tell Jack that because of his stance on immigration he might as well have stayed dead. Dead? Really? Also, seeing Abe give Ted back his job wasn’t right. Honest Abe is better than that. But I digress. The question everyone has is to ask if this about being opportunistic or racist? We’ve never known Jack or Eve to be racists so what’s the real story here? You decide:

What happens after the mayoral race has ended? I think these types of storylines cannot only hurt characters in the long run but the fanbase. Days of our Lives can’t afford to lose more viewers.

Good point. Someone should tell Jack!

I’d say that Jack is probably just an opportunist. Eve is being racist. JMO

That’s just my opinion. I’d love to hear yours!

Victor, “Sure, I’ll frame them and then I can shove them up his…”

Abe to Jack, “If this is the man you’ve become, my old friend, you might as well still be dead.”

Deconstructing DOOL: The Lull Before...