Deconstructing DOOL: No shocker – murderess Hope Brady’s back at SPD 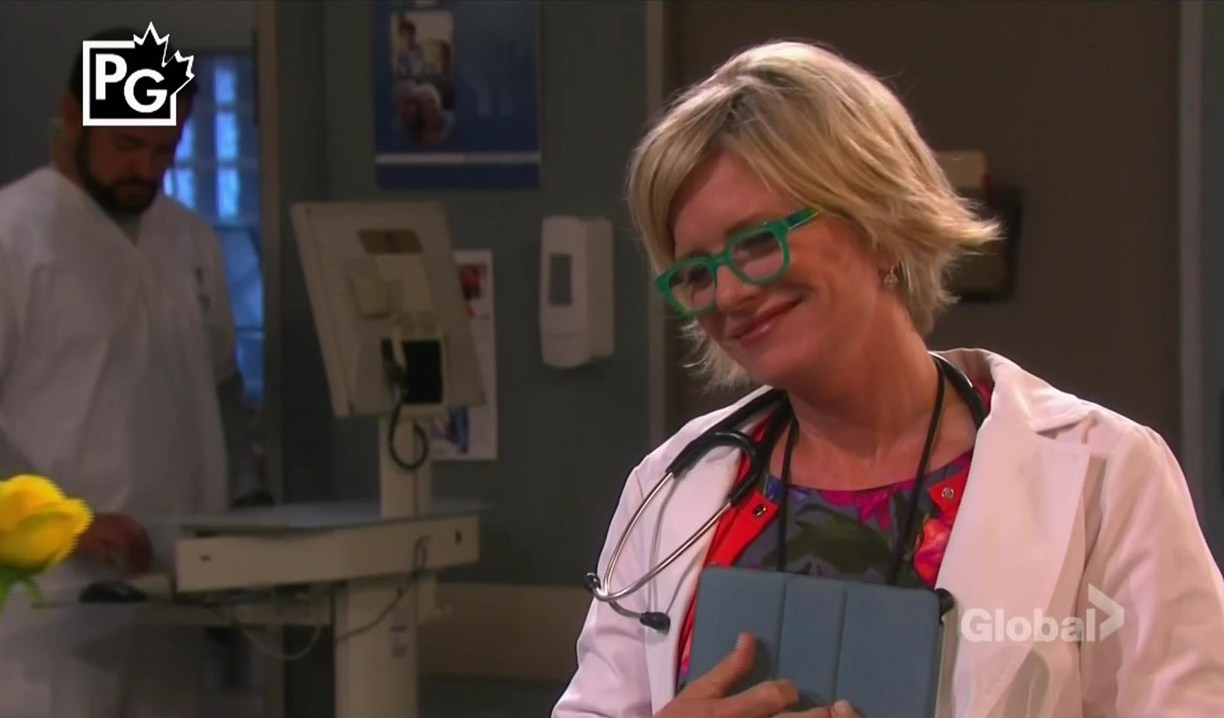 This week the episodes deteriorated as the week went on though it was great to see the return of the DiMera mansion and the new furniture that reflects younger owners is beautiful. The most touching scene, surprisingly had nothing to do with Nicole and the baby but Roman retiring from his post as police commissioner, and his reason behind it. Bo. We had our fourth kidnapping in four weeks and the rest of the plots, in addition to the Hollynapping, are all plot-driven and short sighted. We feel so fortunate that the show has another year and are looking forward to Ron Carlivati’s tenure as head writer, hoping to turn things around.

Running Titan.
Last week in Deconstructing DOOL, Sonny running Titan was put into question. This week he spoke about being powerless, but because of his youth and usual sweet and kind demeanour, he came off sounding like a little kid. It’s not believable that Victor would put Sonny in a second position, disregarding Brady and PhillyK. When Sonny confronted Deimos, he told him, “You are not fit to run this family,” which was interesting, because he’s only running the company, not the family. This isn’t “The Godfather.” It’s plot-driven. Gratuitous shirtless photo…
Apparently some can tell that Eric’s not standing in his bedroom in this scene and it turns out the room he lives in is actually not just a room but an entire house that the studio now calls ‘the farm’. This must be one of those Magic Eye optical illusion photos because I don’t see a background. Do you?!

Anne’s shenanigans.
Anne was her usual fun self this week, confiding to Chloe that she’s into Lucas, a scene that reminded us Chloe and Lucas were once married. But suddenly having Lucas in a scene with her out of the blue when we haven’t seen him in months, was out of left field. Does Lucas really have a shot with Adrienne still or could Anne be a contender?

Hal’s transplant.
Jade’s father needed a kidney transplant but nobody cares about Hal. Or Jade. So why even bother writing for these two?

Ironic glasses worn today are tomorrow’s regrets.
Shaking my head at whoever came up with the idea to stick those thick blue subfuscous glasses on pretty Kayla. I guess with Brady wearing those ugly 90s vests we can’t expect them to remember the 80s clearly enough to stop stuff like this from happening.

Keeping it real.
Many fans found Gabi’s jealousy over JJ to be pathetic but it seems valid to be pissed to learn the woman your beau cheated on with is now dating him. Hopefully it’ll be the last of their run-ins. After all, their relationship was barely a blip on anyone’s radar.

Chloe vs. Nicole and the fourth kidnapping in less than four weeks.
As angry as I am with Chloe for her cruelty in keeping Holly from Nicole, the fact remains that my misguided Nic Nic has kidnapped a child in the past should mean she doesn’t get custody of any child in the eyes of the court. That pains me to say since I want Nicole to have her baby. Chloe’s even right not trusting that Nicole won’t get back together with Deimos. The fact remains, she made a choice – Deimos, instead of Holly, something we again point out that Nicole would never do. That restraining order was just twisting the knife further but Chloe was probably hoping it’d keep Nicole from doing exactly what she did – kidnap Holly. She doesn’t know her BFF that well. She only succeeded at making Nicole more desperate. Either way, it’s sad to see this friendship ruined, written with such short sightedness. Nobody is a fan of a plot-driven story. It’s also not easy to forget the fact that Chloe has abandoned Parker for the past 9 months but calls herself a better mother than Nicole. Yep.

This week we learned that Arianne Zucker is leaving as Nicole once her contract expires in April. What a blow to the show and to me. And maybe some of you. My Nic Nic’s days are numbered. And there is no Vivian to console us, no Stefano… no villain, no really interesting characters. I won’t miss all the crying as of late and how they backtracked her personality but that could have changed. All I ask is that they don’t recast her. Just give her an option for a return and bring back some past favourites.

@SheKnowsDOOL @Ari_Zucker The show has lost so many good actors and now Ari. It wont be the same. — loganne (@logannehb) March 1, 2017

@SheKnowsDOOL This should be the last year of the Daniel show with Nicole leaving #FingersCrossed #Days — Steene Marie (@MarieSteene) March 2, 2017

Some fans are saying, “Nope to Rope.”
Rafe and Hope cooking and getting amorous was enough to make any ‘Nope to Rope’ viewer want to claw their own eyes out. Fancy Face turned to Flour Face. I can appreciate the scene was meant to be light-hearted, loving and romantic. It was much-needed after Hope spent all that time in the big house but I just didn’t care. I only care that Roman let her back on the force as his last move as police commissioner. Whether or not anyone knows she really committed murder aside, she did shoot Stefano in cold blood and there’s no way she should, in the eyes of the law, ever be a cop again. Even in a soap. There are plenty of jobs she could do that wouldn’t have fans hating on her for getting away with murder. All that aside, Roman’s reason for retiring because he didn’t feel quite himself after Bo’s death was touching and a nice welcome to the constant talk of another dead character we won’t mention.

Oh Gabi. This can’t be good.
Ex-con Gabi took money from two cons, Eddie and Dario for her business. It’s like the former head writers want to ruin every single character, one by one.

@SheKnowsDOOL Oh yeah and Gabi? What is the ex con thinking taking money you just KNOW is going to land her butt back in jail??? — Denice (@DlishDenice) February 27, 2017

Anne to Lucas: “…there’s wind in our hair and our bodies would be like entwined in this way and I would be free falling in a sea of ecstasy.”

Deconstructing DOOL: A slow week in...