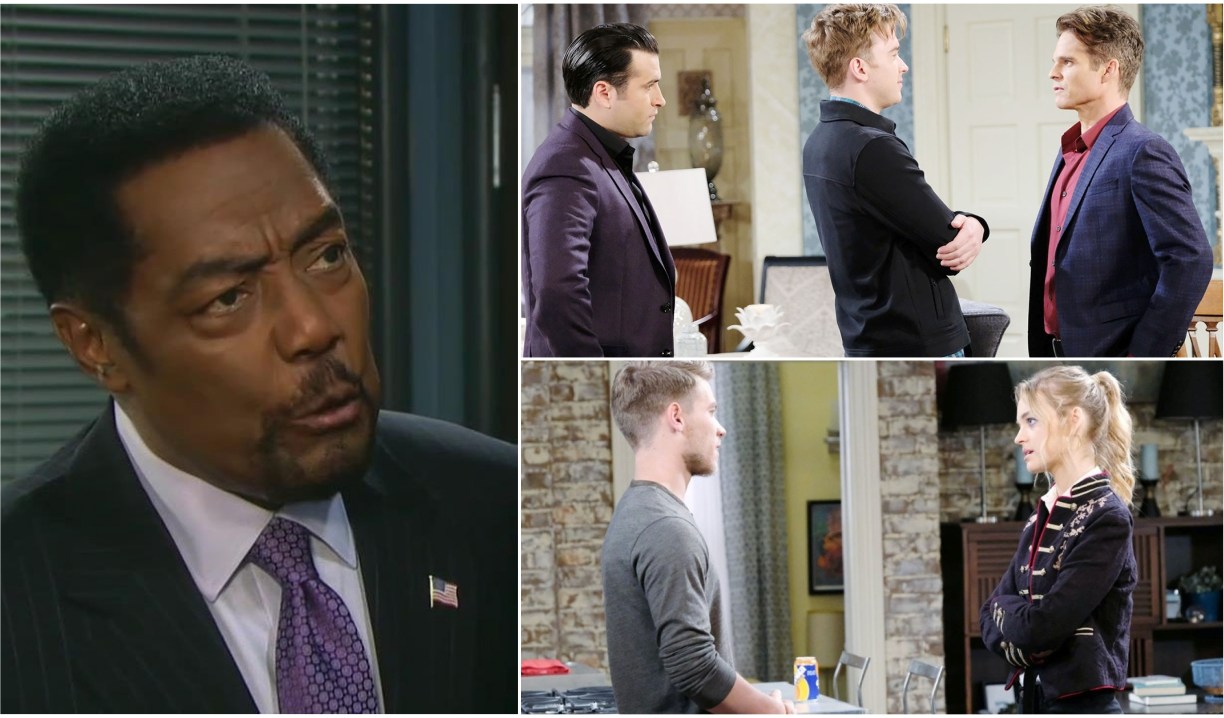 I hate to admit it but this week watching Days of our Lives wasn’t one of my favourite trips to Salem. I felt annoyed by more characters than usual and was jealous that I couldn’t give some of them the evil eye as Leo did with Will.

Brady wins for most annoying this week

Last Friday in Deconstructing DOOL, I voted Eric was most annoying over Brady with all that bartering with God and this week, though I’m annoyed with Eric for not punching Brady in the noddle for blackmailing him, Brady takes the cake for doing the blackmailing. He hasn’t learned from his past misdeeds and is blind to see that Chloe’s not ready for him or maybe not that into him. He has better chemistry with Gabi. Maybe he should focus his attention elsewhere or perhaps go up to Canada and see how his hardware store is doing for a while. He can take Eric with him. And Claire. And Tripp…

The buffoons of Salem wore me down

I’m extra cranky with these Salemites this week. I know, I know, Claire is young and inexperienced, but I can’t stand that she hasn’t voiced her true horror at what Tripp is doing to their relationship and their futures by marrying Haley. It’s the dumbest thing ever and ridiculously illegal. Where the hell is Belle and Shawn in this mess? Their parenting truly sucks, and I’m not too happy with Kayla for basically encouraging Tripp. And JJ standing around like a doofus while the girl he is into is marrying his cousin is the lamest. And Tripp is the tackiest to use Claire’s ring to propose to Haley with.

Dumbest moment: JJ being oh so puzzled by the lighter he found in Claire’s jewelry box.

Sarah finally owned up to chasing after her boyfriend’s brother and making out with him but only because her precious Eric was being blackmailed. If I were Rex I’d dump her in a heartbeat because she only wants him back because she thinks she has no back-up. Let’s hope at least he has some self-esteem. I wanted Rex to punch Eric in the face so badly…

More ridiculousness in the romance scene

Will and Sonny had literally two full minutes of romance before Will took ill after being cursed by Leo. I love the supernatural element and would prefer if the evil eye is the reason Will took ill but I can’t help but think it’s got something to do with Rolf’s serum. In related news, Greg Rikaart has finished taping Days as Leo Stark which we expected would happen sooner rather than later as he has no real ties to Salem. I found Greg’s portrayal to be captivating. I went from hating Leo to feeling for his plight. Well done.

What happened to the writing for CIN?

Ciara and Ben went from being the hottest couple I’ve seen on any soap in years to an old married couple at lightning speed. The actors are talented, they’ve got this amazing chemistry but the writing has gotten cringey. Ciara used to be badass and this week I saw her as a harpy, nagging Ben to go see a doctor for his infected hand. At this stage in a brand new relationship, only the diehards want to see domesticity. I was bored. Shouldn’t that writing be reserved for when they’ve been married a few years? Give us the wining, dining and uh…sixty…Just kidding- no wine. These guys are too hot to be doing what 40-year-olds would do. I want to see more fun than a hospital visit. Even the sponge bath wasn’t as hot as I expected. I curse Kayla for interrupting!

What writers have done to Ciara as character is making me lose interest in a pairing I once adored. Rovi still have chem which is making this awful plot point writing work. Ciara trying to get Ben comfy on a “bed” thats an examination table is another example of stupid writing

Yeah I agree Cin needs light moments, but the writing lately has been contrived and this scene pretty DUMB.

Stefan and his obsessions

Brady and Stefan have something in common. They’re obsessive. When Chloe sang to Stefan, he looked spellbound. I thought he’d pass out from sheer bliss. The recast was perfect. He didn’t just resuscitate Stefan, he recreated Stefan as a better character. He’s awake in all of his scenes. But I still see no chemistry between Stefan and Chloe. He’s like that lonely kid in the playground who doesn’t know how to be friends and tries to buy you with candy. He needs to learn to relax. He should be looking in Gabi’s direction. Though that kiss between them was bizarre, it did seem obvious that they’re into each other. I wouldn’t mind seeing a tumultuous relationship between them.

I really loved that Kate and Rafe’s easy friendship returned. I also thought it was funny that Kate was as astounded as the rest of us that Pepe Laurent Ted Laurent was made DA with his shady past. It’ll be fun watching Rafe dig up dirt on Laurent and bringing him down. I also loved Kate and Marlena’s hospital scene where Kate learned who tried to off her friend. Those expressions! The laughter was appreciated between them. Last, but not least, I loved Abe going off on Hope for allowing him to hire a blackmailer as interim DA which will ruin his mayoral campaign! I yelled at my screen, “Fire her, Abe!”

The biggest “reveal:” Jordan has a baby. Who the hell cares? Unless Rafe’s finally going to be a daddy, I couldn’t care less.

“I was drowning, and I didn’t know how to save either of us.” – Diana

I know that many find Diana a cartoon character or over-the-top. And I too have winced a few times but I love Judith Chapman’s work and I felt for Diana as she explained how she spiraled after all the beatings at the hands of Richard, er “Dick.” She even admitted to knowing she’s desperate and sick. But she’s messed up and needs Bayview – stat! But first, she needs to tell us about how she saw Ted’s dead wife alive and in France!

This is an opinion piece on this week in Salem – I look forward to hearing your opinions on what went down this week in the show.

Kate, “What? Who the hell would appoint him DA. My God with his shady past. How many skeletons do you think he has in his closet?”

Rafe, “That’s a good idea. I just dig up some dirt on him and I get him out of that job and out of my life for good.”

Kate to Marlena, “What kind of family is that? So, Leo is a lying blackmailer, the mother is a homicidal maniac. What do you think the father is like?”

Diana, “He’s not your father you idiot. I made the whole thing up.”

Jack to Eve, “Sex, lies, and videotape. Now that feels like a real political campaign.”