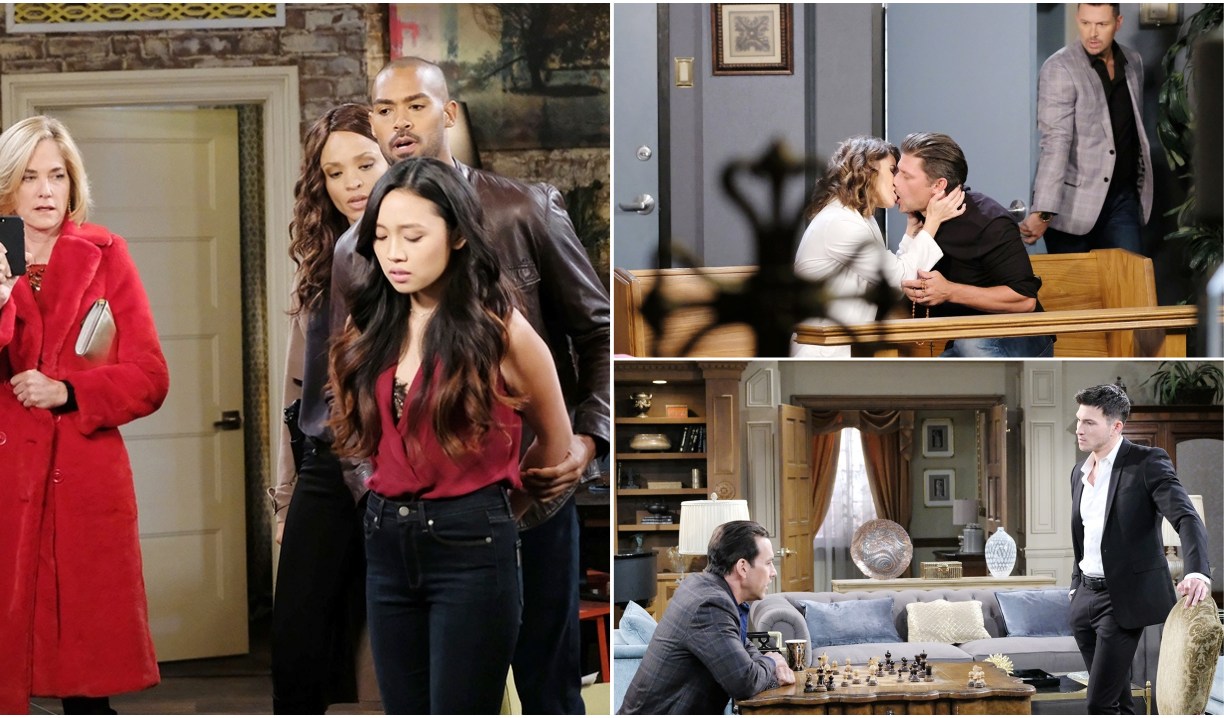 We saw some repetitive storylines with predictable outcomes this week, with Marlena being hunted down and hospitalized and dying at the end of the episode, then John finding yet another son (do we believe this though?). The political campaign has provided a lot of excitement though some are downright angry that their soap has any politics in it. I can understand that and can’t recall when American politics was so ‘in your face’ in a soap. I give Ron C credit for taking a chance in going there. I find the story well-written.

Marlena was shot seven months ago and almost died, yet already, she’s been poisoned and is predictably back in the hospital and this time she didn’t just knock on death’s door, she actually died on Friday’s cliffhanger episode. The problem is, nobody’s worried since we know she’ll be fine. That doesn’t mean I’m not enjoying the storyline but some aren’t. They’ve complained about that and how they find it annoying and predictable that Diana was left in Marlena’s office alone with the paternity test results which means she likely changed them in her favour. You know, just like Gabi did to Chad a few months ago. Yep, a familiar trope, just as Lori Wilson mentioned last week in Deconstructing DOOL, on Jarlena avoiding one trope only to face another.

So what’s new? Another story of someone trying to kill Marlena. Wash, rinse, repeat.

How’s this for originality?

Some expressed their distaste at the defrocked priest kissing his brother’s girlfriend in a hospital chapel. I found it original and pretty juicy. More so when Brady caught them together, especially since Eric has been down this road before with Nicole. That part’s unoriginal. I am guessing Sarah hasn’t told Rex or Eric her true feelings because she’s waiting for Eric to pass her a note in chem class to say that he like likes her. You know, before she admits to her own feelings.

Nurse Shelley Santos spewed racism and hatred at the public square this week. I felt embarrassed for her while she regaled Jack with a hapless story about how her nephew applied for the nursing program and was turned down. It was a surprising scene. As for the nephew, it sucks that he didn’t get into college but nobody knows for certain why and since we don’t know him or Shelley, nobody cares. After what she did to Marlena, most think she’s basically trash. I admit I judged her for blaming others for her nephew’s  shortcomings. Instead of blaming and whining, perhaps he can apply again or elsewhere. Or hey, he could bribe the college admissions board… Too soon? I digress. I couldn’t believe Shelley jeopardized her own career and freedom in order to allow some random woman access to a doctor’s office and pharmacy on the off chance that she could stick it to Haley. Super short-sighted. Lucky for her, Dirty Diana’s quick thinking to blame Kristen DiMera of all people saved her hide. Oy.

I smiled when Jack called Jenn Jenn a hypocrite for criticizing Eve for not following the rules while she defended Haley for knowingly breaking the law. He wasn’t wrong! But Eli mentioned that illegal entry into the country for the first time is a misdemeanor – so what will that mean for Haley? That she should be more afraid of Claire than the cops?

I could not believe it when John gave Leo the mysterious envelope before the charges were officially dropped against Will and Sonny and before Leo and Sonny’s marriage was annulled. Ack! And John didn’t even read what was in the envelope! And in keeping with the stupidity, Marlena didn’t look at the paternity test results as soon as she got them? Wouldn’t you have torn into the envelope the second they hit your hot little hands? Yeah. Me too.

What I loved: Diana’s Groundhog Day fantasy with John returning to her door over and over crying over different ways that Marlena had died. Hilarious. Those tears!

Should Stefan be with Chloe or Gabi?

I don’t see chemistry between Chloe and Stefan though I enjoy their friendship. For me, it’s like trying to make ‘fetch’ happen. They’re Rope to me. I did like Chloe and Rex’s scene but I can’t recall what they discussed because Rex was shirtless the whole time. But I’ll try to do better next time they’re in a scene. Gabi and Stefan’s chemistry is still super hot and this week I found their argument fun and not forced. Leo catching them during “foreplay” was pretty funny. I like how he tells it like it is. It makes me miss Sami. Stefan’s finally becoming a character that I enjoy. I loved his scenes with Ben and the kind and smart advice he dispensed but sadly, Tyler Christopher’s not with us much longer. Hopefully Brandon Barash will do well with the part, and maybe we’ll see Christopher back at General Hospital as Prince Nikolas.

What I didn’t like: The bizarre way Gabi speaks to the CEO of the company she works for! Calling him an idiot and doing as she pleases. I mean it’s hilarious but scandalous!

THIS SCENE HAD ME DYING LAUGHING…Stefan:”If you say so.” Gabi: “You’re seriously delusional. I wouldn’t touch you w/a 12 ft pole unless I was using that pole to beat you senseless.” Stefan: “Ooooo…” w/a smirk while he’s probably imagining it. #Stabi #Days 😂🤣😂 pic.twitter.com/vIYFDNYPGp

This is my opinion piece and I look forward to seeing your own respectful opinion in the comment section!

Jack to Eve, “Why did my brother name his son Tripp? That’s like signing him up to get his ass kicked in fourth grade!”

Stefan to Gabi about her new throw pillow. “It’s ugly. It’s Ugly with a capital U.”

Leo to Stefan, “I haven’t seen the results yet but I’m certain they’ll prove I’m half-Black.”
Stefan, “Uh?”
Leo, “You know what I mean.”