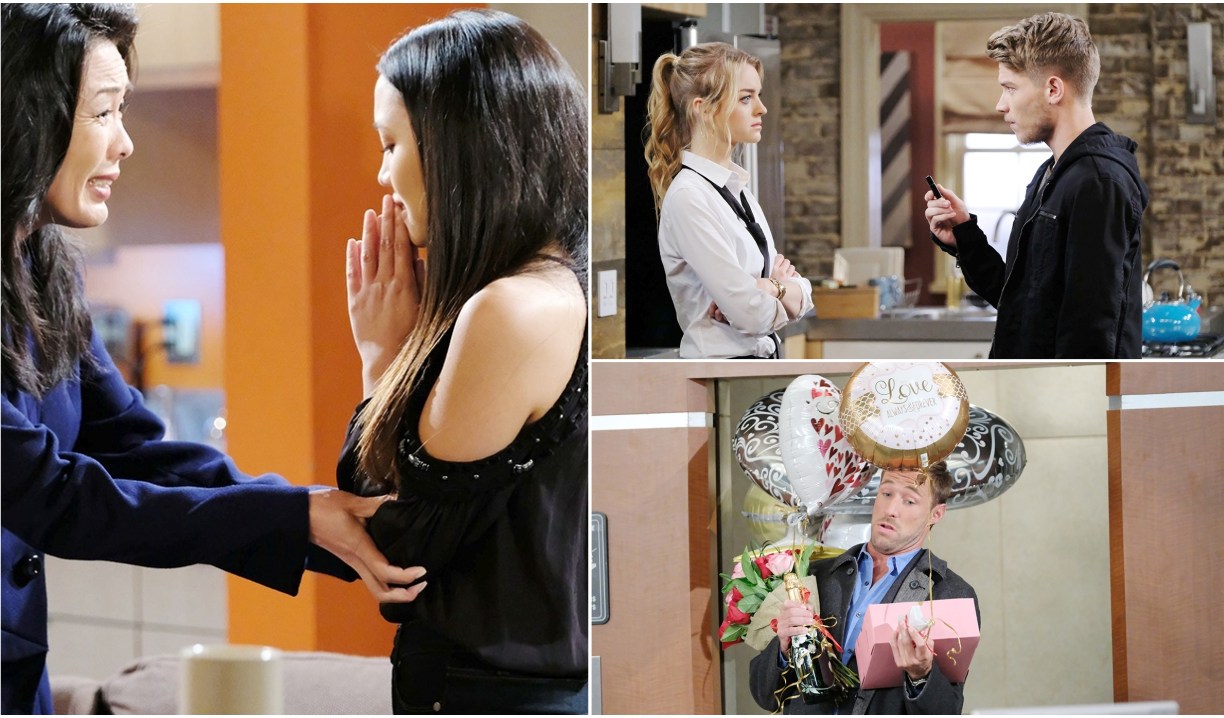 There’s a theme this week – himbos. First of all, John assumes Diana’s telling the truth, that Leo’s his son and is defending him when he hasn’t even had 15 DNA tests in 15 different countries to confirm the kid is his (and not Ted’s!). Second himbo is Rex, who hasn’t even considered that something is going on between his girlfriend and brother, and third is Stefan, who has nothing going for him but his business, yet it didn’t occur to him that Gabi would go to Mr. Chin behind his back.

The scoundrel and the shark

This week Leo finally got a little taste of his just desserts in one fell swoop when Will punched him in the face, and Diana and Victor decided to work together to take him down. Unfortunately, John and Marlena’s relationship will be tested in the process. I loved Diana wearing princess gloves mid-day with that dated 90s black and white dress. Hilarious and effective in showing she gives zero uh… cares. While I adore Judith Chapman and am interested in Diana’s story, this is falling flat already for many viewers who feel it’s stunt casting.

Poor Rex doesn’t have a clue when it comes to relationships or Sarah. Instead of taking things slow and building trust after his indiscretions, he pounced with another proposal. Oy. At least he’s trying…I guess. But Sarah had the perfect opportunity to dump him at that point. I found Marlena counselling Eric to reveal his feelings to Sarah to be selfish and disrespectful advice. I guess I’m not a fan of hurting someone else just to spill your secrets.

Curious… How has Rex been surviving since he’s jobless?

I’m not sure if we were supposed to feel bad for Jordan because she lost her marbles after some offscreen terrible car accident which led her to remembering that she murdered her mom and her unborn sibling, but since they didn’t flesh out her story, I was left feeling empty. She could have had a more compelling story long-term. I guess she’s gone now that she propped Ben’s character so Hope could apologize to Ben and maybe have some redemption for her own behaviour in the process.

The most popular sentence of the week from Days of our Lives fans: “So Claire’s crazy now too?”

I wonder if the show had Ben as the fire starter and once they saw the positive reaction to Ben and Ciara they decided to make some major changes to their story. Or perhaps Olivia Rose Keegan decided to leave Days of our Lives and this was a good way to write her out. Either way, it was a massive shock that Claire was the firestarter considering they already established Tripp as the culprit. Didn’t Tripp admit to it? This makes her look completely insane. Even Sami Brady wouldn’t have gone this far. I’m a little disheartened because once again it feels as though they’ve ruined another character in order to prop Ben or Ben and Ciara as a couple. It’s not necessary and sadly is ruining them for many. That’s crushing when there aren’t many couples on the scene as it is.

I admit it really hurts that this legacy character may have no future since she’s likely prison bound.

Last week in Deconstructing DOOL, I wasn’t feeling Gabi as a harridan and this week, I quite enjoyed Brady and Gabi working together which has already proved to be impressive since Gabs was able to worm her way back into DiMera. I liked the little smirk she gave Stefan when he was talking with Chin and realized she duped him. What I didn’t care for is Chloe massaging him afterward. Too fast, too familiar and… plain weird at least for me. It looks as though more of El Fideo’s goons are back to avenge his death – unless someone else is lurking outside the DiMera manse. I’m intrigued.

Best scene: Gabi promising to tell Mr. Chin about Stefan’s unprofessional behaviour and then snapping, “Hashtag me too,” when she left the mansion. It. Is. About. Time.

You mean the one tablet in Salem? LOL

While I enjoyed the mayoral debate and found that both parties had some very good points. We expected the dirt to be flung but it wasn’t any less of a sting to see Jack reveal Haley’s secret in public that way, humiliating her, basically ruining her life in order to get back in the mayoral race. I’m also disgusted that he’d do that to JJ, especially since he told JJ he loves him moments later. It’s no wonder that JJ disowned him. He deserved it. A Soaps.com reader, VoteOutDandRs, called Jack a “simpleton puppet.” Rings true. I felt a little bad for Melinda who now has to vote for Abe “I turn a blind eye to the SPD” Carver as mayor instead of Cutthroat Jack until she turned on her own sister in front of the cops. Thankfully, Haley has a few Salemites on her side but the only way she’s likely to stay in Salem is if JJ and Haley get married.

Why hasn’t Jennifer beaten the crap out of Eve yet? #Days pic.twitter.com/qvMorNP05J

This is an opinion piece. Please feel free to leave your own respectful opinion in the comments!

Rafe, “I always thought Trask was the bottom of the barrel,” in response to learning Ted was the interim DA.

Melinda to Jennifer, “Aren’t you supposed to be moderating?”

JJ to Jack, “You’ve destroyed me. You let me think that I can trust you, that you were the father I remember. The dad I loved would never have done that.”

Jack to Eve, “Two-crime family in a one-horse town.”