Deconstructing DOOL: Gabitch’s Superpowers Include Tying Men to the Bed 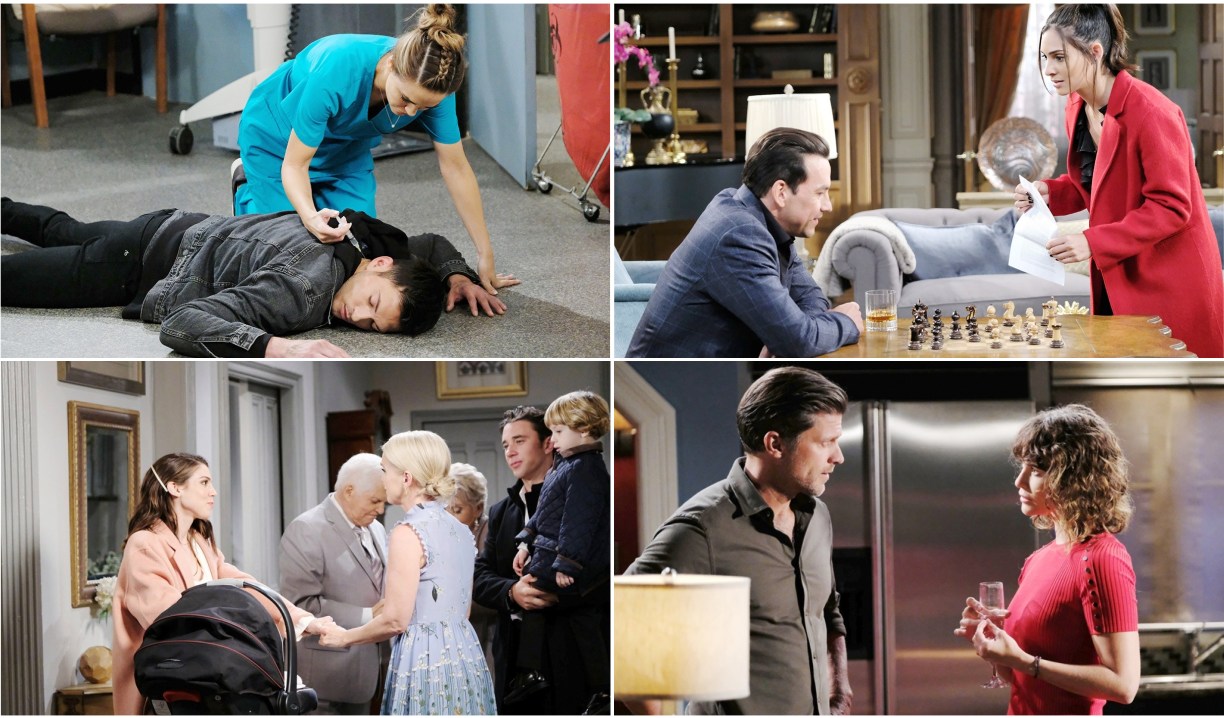 Recent oddities on Days of our Lives this week in Salem…There’s a theme of ruining one character in order to prop another, while Kate flatlined at the end of the Valentine’s episode, but in the next episode, there was no mention of this, like it never occurred. When Eric was talking to Rex about his grandma Caroline, he forgot that she’s also Rex’s grandma, and lastly, miracle of all miracles, Stefan apologized for taking advantage of Abigail. Last week in Deconstructing Days, I spoke too soon about Valentine’s Day romance because it spanned from February 14 – 18, and gave us more romance, I was quite pleased. Please note that I’m off Friday so this column doesn’t include discussion for that day.

A happy ending for this tortured couple

Literally, this couple has been brutalized for quite some time, though this week, everything changed for Chad and Abigail as their storyline wrapped up with some lovely reunion scenes before their quick sendoff. I loved this couple in the beginning but that feeling faded somewhat. Even still, I loved how it all came together with their reunion, Chad taking that job in Paris that Eve refused. The Chabby wedding was beautiful and heartwarming. They’ve been given so much airtime over the last few years that I wonder who that big hole is going to be replaced with.

Picky… Chabigail got married without a license. How does that happen?

Le sigh, goodbye Chabby 😭💔😭 @billymflynn @KateMansi I shall miss you both #Days

Longtime followers remember I was a Billy Flynn stan from 2014 to 2017. Then he started thinking about pizza and showing out on Twitter. I’m happy he’s gone. #IWillTurnOnYouIfYouThinkAboutPizza #Days

More: Read Chad and Abigail’s vows during their wedding

The shark has become the interloper

Rafe returned from Italy and oddly, didn’t see Not-my-Ted making out with his wife (#metoo), though the entire hospital did. But he didn’t need to when Not-Ted attempted to make Rafe jealous of all the time he spent with Hope while Rafe “was off in Europe with his ex.” How lame. I expected more from Ted who used to be a shark. Sure, for Hope, Rafe running off to Italy to help Johnny sucked but that doesn’t give Ted an invitation to help himself to Hope. How boring and weak. Maybe ruining Ted is being done to prop Rope. It seems to be a theme on Days of our Lives these days. Ruin one character in order to prop another.

Is Jordan’s reign of terror over?

It appears as if they’ve ruined Jordan just to prop Ben, which isn’t necessary. I don’t have anything to say about this story this week except to wonder if Jordan’s soon on her way to prison or Bayview or if like everyone else in Salem, she’ll find a way around the law.

I laughed aloud when Ciara said she’d call for help when Rafe – Detective Hernandez – was holding Ben back from killing Jordan. Was that Ron C’s way of subtly mocking SPD? And I loved Eli admitting to Lani that he was down on himself for being so incompetent when he let Ben Weston get the drop on him. It makes it easier to forgive. But didn’t that just happen a few months ago uh on August 21, 2018 to be exact, when Sami bashed Rafe in the head at SPD and escaped custody? Oy.

Wearing her heart on her sleeve

As everyone knows, I like all of the Days of our Lives characters. I like Gabi. But I am still not feeling her as a harridan or whatever. It looks forced at times and more as a caricature of a bad girl and then she starts to whine to Kate and it ruins the bitchiness. Maybe she just needs more lessons from my Kate in how to keep her emotions to herself. I loved that Gabi stuck up for WilSon – very sweet and reminded us of their history, but how did she tie up Leo? Same way she dragged Abigail across town drugged? Superpowers I guess. Having Leo try to commiserate with Gabs for both being ‘bitches’ was lame though. Leo’s not a bitch, he’s frighteningly certifiable. I was shocked that he went to the cops with his “attempted murder” story but more shocked that Sonny’s hired Justin as a defense lawyer. How long before he and Will wind up in the slammer for “attempting to murder Leo?” Meh.

Gabi’s firing: Did Stefan fire Gabi out of spite or because Gabi Chic isn’t performing? If it’s truly not performing, then she can’t really blame him can she? And if he fired her out of spite, she should be angry but not surprised in the least. Maybe she’ll take him down.

Sarah, our resident off-the-wagon alcoholic, got trashed again and trashier than ever by making a complete fool of herself to poor Marci on Valentine’s Day no less, confronting her about “sleeping with Rex.” The scene disturbed me and if she were my friend, I’d have ripped that phone out of her hand before she could dial. Yet…I couldn’t help but burst out laughing at the adorable grimace on her face afterward. What I’m amazed by is that Eric hasn’t called Sarah out for being addicted to alcohol. Amazed. Truly…

This is an opinion piece. Please feel free to leave your own respectful opinion in the comments!

Sarah, “Do you think I’m just a paranoid, crazy person?”
Eric, “I think you get tunnel vision sometimes. It’s like when your brain hits the gas and it doesn’t stop.”

Eve, “Look at you, campaigning your little heart out. Oh that’s right. You don’t have a heart.”
Melinda deadpans, “Hearts are overrated.”