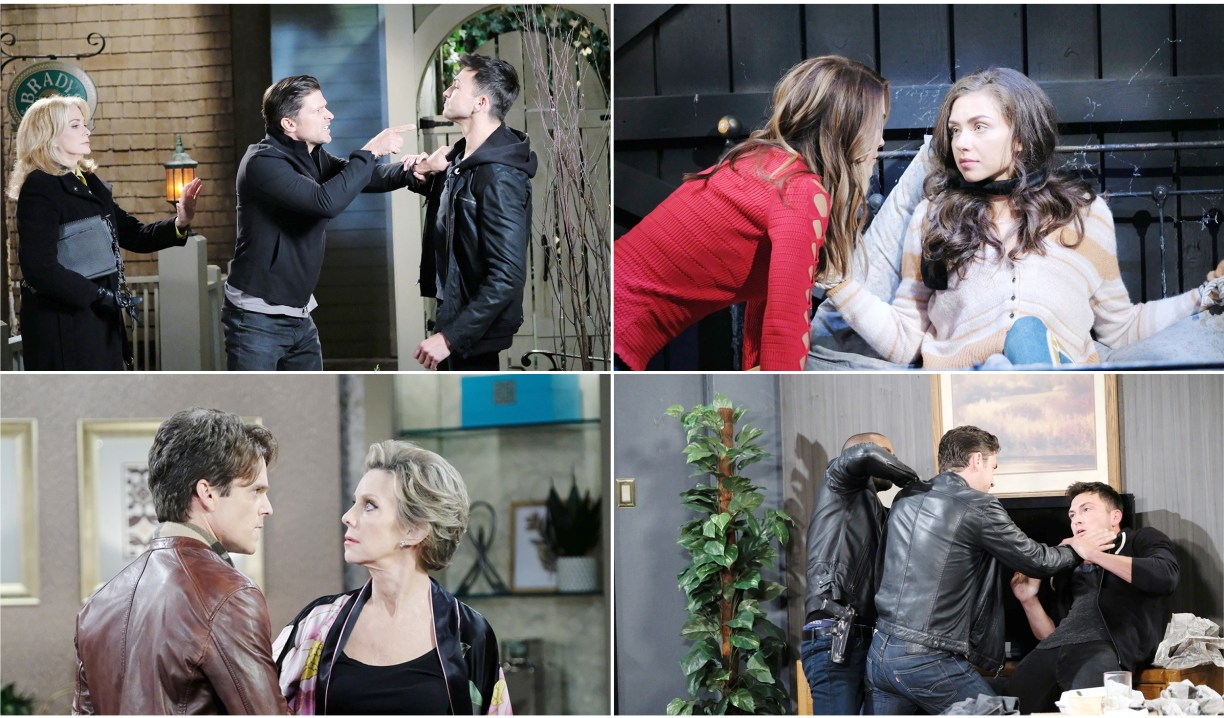 Days jam-packed their episodes full of great reasons to watch. Big steps were taken in order to humanize Stefan more, we were treated to a scene between powerhouses, Eve and Melinda, Victor returned and at his most bitter and in need of new material in his decades old grudge against Chloe, and Sarah forgave Rex and jumped into the sack with him faster than Eric could sniff her dress. Yep. The biggest news for Days since their renewal is that Ron Carlivati confirmed he has re-signed with Days, which means more entertainment ahead.

At least they’re together?

Tripp and Ciara are often written 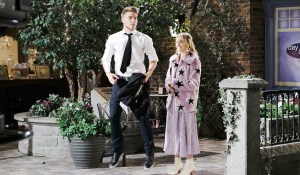 as if they’re on their own island or planet, they’re so rarely in scenes with other characters. This week I’ve enjoyed their chemistry but it won’t last since Olivia Rose Keegan is leaving Days.

Did anyone else notice that Tripp can levitate?

His timing is curious

Last week in Deconstructing DOOL, I talked about Chloe’s past haunting her. I love the twist of bringing up El Fideo again because it’s illogical that Mexico’s biggest drug lord’s murder wouldn’t have been avenged. I can’t recall the last time a Salemite faced consequences for any crime! Stefan opened up about missing Charlotte which was a nice touch to humanize him. But by Monday’s episode I briefly contemplated about the possibility that Stefan orchestrated the entire attack as a way to be the hero and change how he’s seen by Salemites. I ran this by my friend Jennifer Kelly, who said, “My first thought is no because the character has never seemed to care, or at least pretends not to care, what Salem thinks of him.” Good point. We agreed the theory was interesting and if true, would be a classic Ron C twist.

Twice now, SPD’s commissioner and her sycophant buddy Ted broke into Ben’s hotel room to ransack it and twice, Ben did nothing about it. It’s preposterous. He needs to start defending himself and not by angrily pointing his finger and yelling, which makes everyone near him look around for the necktie that they feel is sure to be wound around their necks if our Necktie Killer gets too bent out of shape. It’s hypocritical of me not to give Hope a break but my compassion for her is almost nonexistent because she’s been so unsympathetic for too long. A good cop would have gotten someone else on the case, not take Ben’s lawyer, her new lackey, with her to pull a B&E. Hope has wasted precious moments investigating Ben instead of going to the last place Ciara was seen first – the airport. I was irritated that Ben of all people had to point that out! I’m not happy that Marlena broke Ben’s confidence, either or that Hope told Ben. Without Doc’s support, Ben could relapse.

Eli, one of the two “good cops,” refused to search Ben’s place without a warrant yet allowed Chad to get away with attempted murder on Ben. And none of the cops have figured out that Ben was with Eli and Lani when Charlotte was taken. Yep.

Hey Eric, how about a show of concern for your missing cousin. Instead of even an ounce of worry about Ciara, he’s just coming down Ben’s throat. #Cin #Days

Is Leo John’s son? I like the idea of finding a way to keep Leo and Diana around, but find it disappointing that they’d repeat the story of John learning he had another kid out there. I loved hearing Leo and Diana’s compelling backstory. I felt for them both until Leo threatened his mother’s life. Now I don’t know what to think! I’m constantly a contradiction with my thoughts on characters under Ron C’s writing.

Jordan Ridgeway was one of most bland and dowdy characters which is why it’s such a shock after four years she returned with a makeover both on the outside and inside. She kidnapped both Ciara and Charlotte to “protect them from Ben” to mixed reviews. Just because Jordan and Ben share the same childhood doesn’t mean they’d both have mental breaks. Many are entertained by her being psycho but frustrated by another character assassination for the sake of a few shocks during sweeps. Fans always tell me this is the reason people stop watching. Those who loved Jordan the first time around and hoped she’d return for Rafe are likely crushed to see what’s become of her.

Here’s what makes no sense – How did Jordan even know where the cabin was? Why did she bring Ciara there of all places and why hasn’t Hope gotten a clue to look there first?

More: Rumour of a new Days serial killer has merit?

This is an opinion column filled with thoughts you may agree or disagree with. Feel free to respectfully provide your own comments below on this week’s episodes – that means we don’t shoot each other’s opinions down!

Roman, “Nobody sat you down and told you how not to get a woman pregnant?”
John, “I don’t know. I don’t remember…”

Stefan to Eli and Lani, “If it isn’t Crockett and Tubbs.”
Eli, “I don’t know who that is.”

Victor to Brady about Chloe, “She’s a lowlife slut who isn’t fit to shine your shoes.”

Abigail to Chad, “What’s wrong with this town?” (Surprisingly, that line has never been used before when it probably should have!)

Abe, “Under my leadership this town has prospered and its citizens are safer than they’ve ever been.”  Melinda, “Save it for the few people that still believe in you.”

Deconstructing DOOL: How Do We Ship...