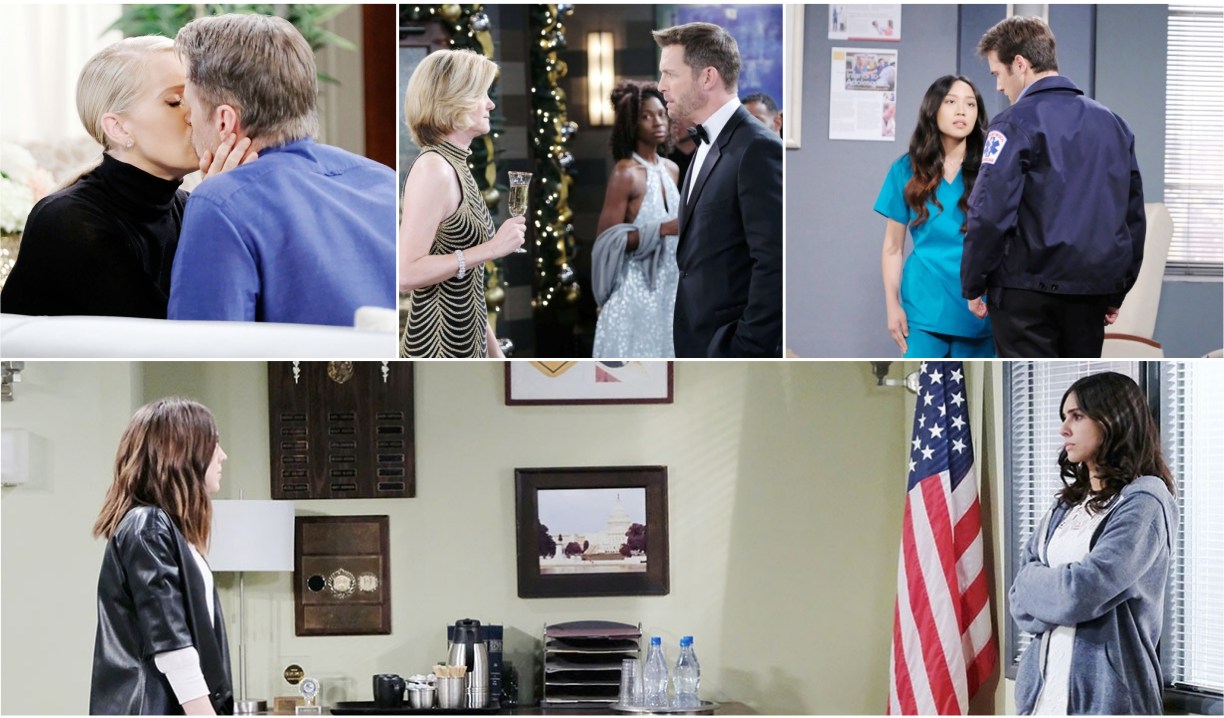 Days wrapped up a few major storylines from 2018 and already has new intriguing ones underway. As usual, though I may have a few problems with some of the things our beloved characters do, I’ve been loving the entertaining stories. Special thanks goes out to to Lori Wilson for taking over my columns while I was on holiday the last two weeks.

I loved reading Lori’s thoughts in Deconstructing DOOL on Abigail’s toughness boiling to the surface which I agreed was a welcome sight. And after wondering for weeks how things would end for Gabi, I was shocked at the ending to this storyline. Abigail agreed that mentally ill or not, what she did to Gabi was terrible and that she wouldn’t press charges because of Arianna. Shocking. It must have been validating to Gabi for Abigail to acknowledge that but at the same time, it’s hard to believe Gabi doesn’t believe that if Abigail wasn’t mentally ill, she’d never have done those things to her. I thought the story might have ended soapier like with Gabi being diagnosed with PTSD or a brain tumour or… I don’t know. I guess Ron C has my expectations for soapy twists pretty high. I know many were disappointed that Gabi didn’t pay for what she did but this is Salem, and depending on the plot, people get loads of free passes. Mostly I’m still reeling that there’s no twist and find it intriguing that Gabi is unapologetic. I wonder if Chad will take revenge upon Gabi since Abigail refuses.

The only good cops in Salem are Eli and Lani. Rafe broke into Stefan’s home and attacked him and lucky for him, there were probably no cameras to capture it. Not that I care too much about Stefan but I do like to keep things fair. Rafe should be suspended at the very least for what he did. Instead, Stefan was arrested for espionage. But like everyone else in town and just like a DiMera, he’ll be out in a flash, I’m sure.

Hope told Rafe that Gabi gaslighting Abigail was “unforgivable.” While Hope should be angry at Gabi for gaslighting her niece, why throw it in Rafe’s face when he’s already hurting? Not to mention that some fans pointed out that Hope has done worse. Murder surpasses gaslighting and Hope’s been forgiven. Hope could have been emotionally supportive and still made her point. The more I see Rope together the more I realize Hope’s going down a different path than Rafe and hers aligns more with Ted’s. If these two break up, I’m sure Rafe will find solace in Jordan Ridgeway. Hope’s 2019 is off to a good start, what with her learning that Ben kidnapped Gabi while Arianna was in the next room. She couldn’t wait to tell Ciara about it which on one hand was hilarious. I’m torn between thinking it was horrible timing since Cin was on the sofa close to getting it on and feeling like it’s best that Ciara knows the truth before they go down that road.

I wasn’t a fan of how they met with JJ violating a professional boundary with a patient. Gross. Then if that wasn’t enough, he harassed Haley afterward. Ugh. If I forget their first meeting I admit I like her and enjoy her chemistry with JJ. Her secret is intriguing but I’ve already figured out who she’s got a connection to in Salem.

Eve roasted all the recovering alcoholics at Doug’s Place on New Year’s Eve I guess in order to feel better about herself. It might have been entertaining to some, even myself if I could get past feeling a little letdown that her return was a rip off from Vivian’s last year. With Eve only gone 2 months, the effect wasn’t the same and honestly, as the owner, why didn’t Chloe just give her ass the boot? It would have been more fitting if Eve would focus on directing her revenge to Ben Weston, who actually deserves her wrath rather than Jenn Jenn but that’s what happens when the plot dictates. I guess we can kiss Eve and Chloe’s friendship goodbye since Eve saw Brady kissing Chloe at midnight. And once Jenn learns that Eve and Jack are intimate, all hell will break loose. I keep wanting a better storyline for Eve.

Because Eve knows the audience never cared about Paige

As for Jack’s return, it was shocking and RoboJack quickly answered most of our questions about where he’s been and how he survived. I found it unsatisfyingly fast. It’s been a day and already Jack’s wondering why Eve has been lying to him, which is pretty funny, but she’s a master manipulator so quickly was able to get things back on track, even to the point of making out with him. Sort of creepy. I loved Abigail’s scene with her dad and felt her pain that her father didn’t know her. I loved that Jenn brought Jack old photos to try to jog his memory though Jenn kissing him was a bit too fast for my taste. Jeeze, he doesn’t even know Jenn.

This is an opinion column filled with thoughts you may agree or disagree with. I’d love you to respectfully provide your own comments below on this week’s episodes.

Jennifer to Eve, “Show me what you’ve got.”

Xander to Eve, “As you can see I was doing well until the Wonder Twins showed up and the entire place went kaboom!”