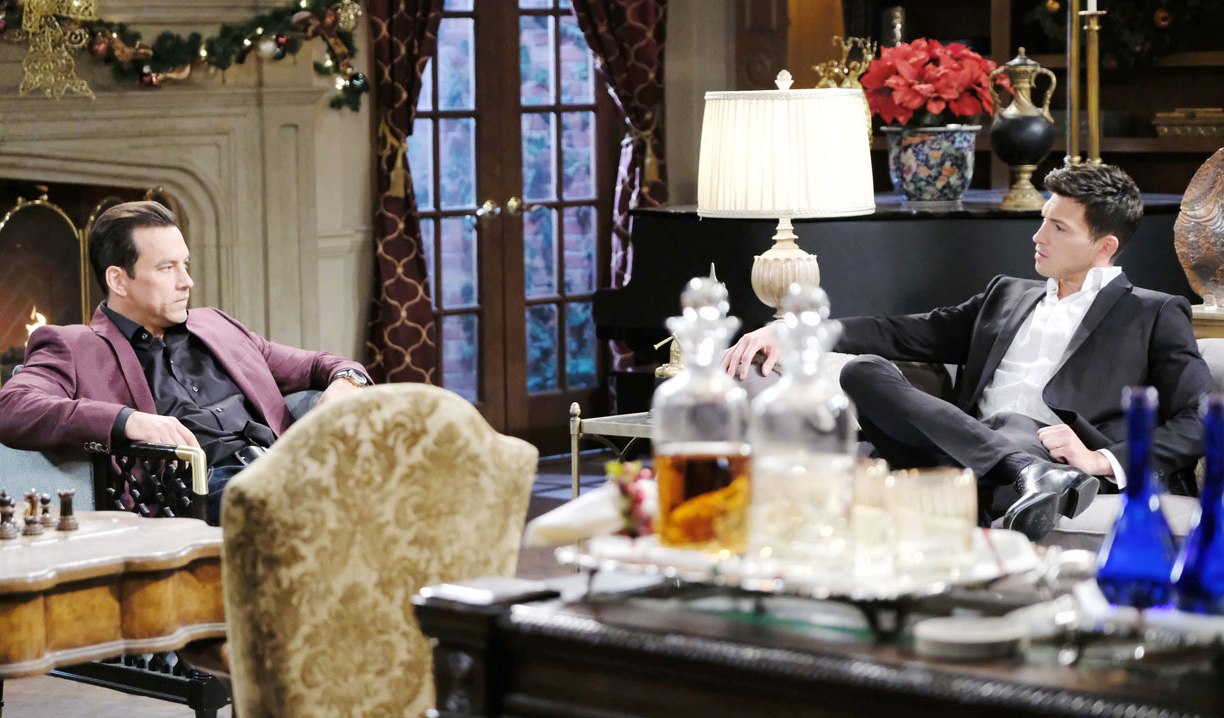 I’m Lori and I’m filling in for Christine this week while she’s on vacation. Last year Salemites sat vigil at Theo’s bedside. This year, in between all the prolonged flashbacks and dream sequences, it was Julie’s turn to await a Christmas miracle. As often happens in these soapy scenarios, it came just in time for the holidays. Now she can give Chad and Abby the gift of Charlotte’s true paternity. While we wait for that paternity reveal, let’s dish what else went down this week…

Characters as islands are not interesting. They need some balance. Stefan’s interactions with everyone in town is basically one long defense of his love for Gabby. But Stefan venting his frustrations and even insecurities to Ben humanizes him. Ben too. He’s already been redeemed through Ciara, but having a friend, or at least a grumpy boss, who might sympathize with his ostracization rounds him out. Stefan hasn’t had that yet. The only people on his side in Salem have been his mother who died and an alter, Gabby. He’s definitely going to need someone now that “Gabby” served him divorce papers and it will only get worse when he learns Charlotte isn’t his daughter. Tortured soul Ben just might be the perfect person for him to lean on, or use to burn Salem to the ground. You know, whichever way Stefan goes with it. My money’s on the latter.

Hope is absolutely right when it comes to Ciara dating Ben. In real life, any good mother would frantically run around town trying to keep her daughter away from a serial killer. But in the fictional world of Salem? It’s enough already. Move on. Ben has been redeemed. Or has he? What if he’s made Ciara and the viewers accept that he’s trying to make up for his past sins and is on a better path only to reveal he’s still evil… all with no spoilers to ruin the twist? That would be a great soap moment, while also vindicating Hope.

What’s next for Gabi?

Last week in Deconstructing DOOL, Christine pondered Gabi’s future. So, she asked Twitter followers if they thought Gabi might be suffering from PTSD, paving the way for eventual redemption. I hope that won’t be the case because I find her more interesting as a bad girl. I want her to lash out with a clear, yet vengeful mind. Gabi can be the new Kate, who is already serving as her mentor of sorts, even if begrudgingly. It’s been the highlight of my Days viewing lately – especially Tuesday’s Days episode – so more of this, please.

Here’s a sampling of what our readers said about the possibility of Gabi suffering from PTSD:

I sure hope they don't. That would grossly misrepresent what effects PTSD can have on a persons life. IMO

Gabi is pure… And I freaking love it! #Days pic.twitter.com/KybtjiKCxz

I was happy to see the show spend time on JJ’s struggle from last year. His suicidal thoughts were heavy and emotional and still deserve attention. I’m guessing the nurse he saved will be around for longer than just Friday’s episode since JJ saving her life only served to upset her more instead of make everything better. I am intrigued as to why she tried to take her own life and hope it turns into a worthy storyline for JJ.

Shout out from San Francisco

Paul may have been voted runner-up as the most annoying Days character by Soaps.com’s readers, but I miss him. His chemistry with Will felt so easy and natural. Will and Sonny just give each other pained looks while Leo tries to manipulate Sonny into sex. I appreciated the shout out to Paul when John received a text from him and would love for the character to return, as a recast if necessary. It’d be great if he could bring back that cute therapist who accompanied him to California too.

Other things I’d like to see in the New Year include a reworking of Leo’s character, Sarah turning it way the heck down when it comes to things that don’t concern her (like who raises Holly), and more romance for Eli and Lani.

But those are just my opinions. What miracles are you hoping for? Share your thoughts below and have a Happy Holiday!