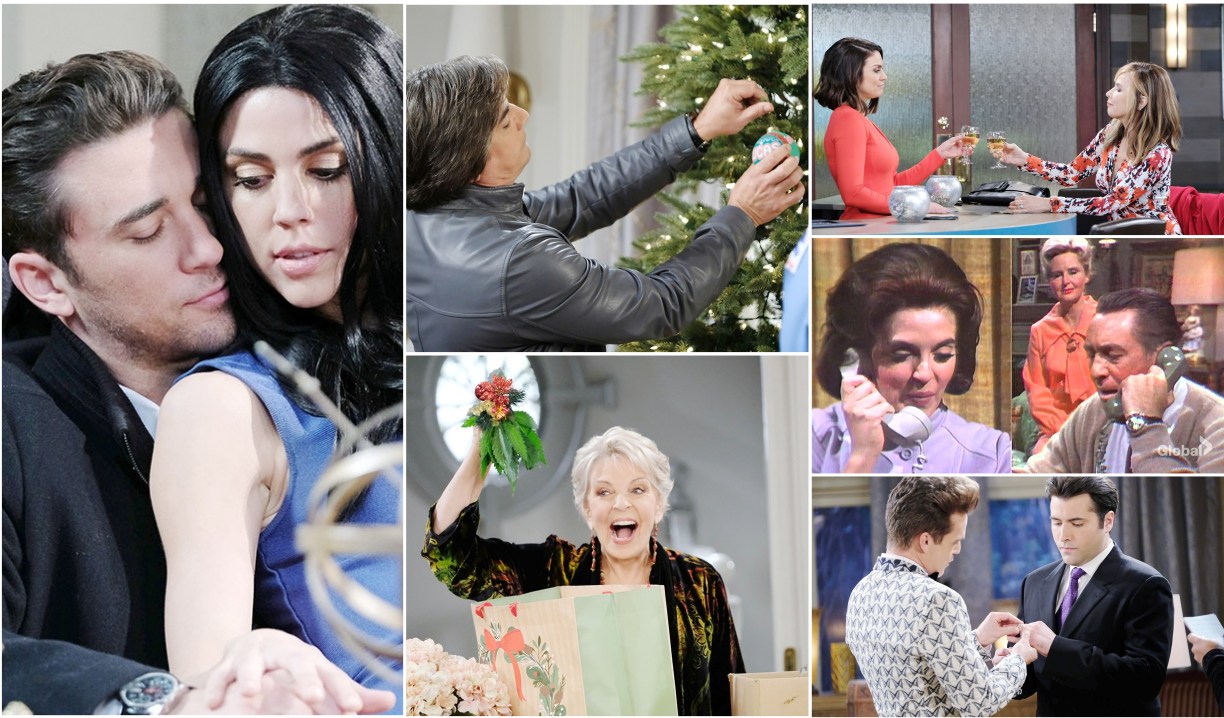 Lately some of us viewers have been a little prickly that while most of our vets appear to be homeless, Stefan’s got the entire DiMera mansion to himself – and his roomie Ben. Remember when John and Marlena had that glorious penthouse? Can we see that set again? She could work from it. When Belle and Shawn visit, they could stay there. Another thing that tests us is that so many Salem mothers are written as being useless, while the men are often dumb as bricks, the gay dudes are focused solely on each other and the people of colour barely get a story of their own…

I don’t recall Tripp being told that Steve was away on business. Maybe that was edited out in post. Tripp took it well which wasn’t that exciting and though the scene felt random since we barely see these two, it was also touching to see their relationship progress. I started to miss Patchy Claus while watching this.

I haven’t enjoyed a Chabby scene in ages. Often their voices were difficult to hear and I wasn’t seeing them as a sexy couple anymore. But when Abby as Gabby teased him by sitting in his lap and he looked as if he wanted to jump her, I was into it. Later, when he moved in for a kiss twice, I was into it. But I don’t get his motivation since he finds her nuts, nor do I get why Abby would do that since Gabby was never hot for Chad.

From our little gold digger Leo, his Ace Ventura hair and his butterfly suit writing his own vows to Sheila’s cue cards, and Adrienne hitting Leo, this wedding was ridiculously hilarious. Unless you’re a diehard WilSon fan and then it was plain ridiculous because all you wanted for Christmas was WilSon together. But because I’m not invested in them, I get to blissfully laugh my arse off throughout this entire storyline. Adding Uncle Vic was the icing on the cake.

The case of Holly Walker

This custody case in the making just got more complicated. Last week in Deconstructing DOOL I thought Eric would be a fine father though it’s weird that he is pushing so hard to do so. Everyone should be considering what’s best for the kid, not themselves. Now, with the registered letter Chloe received, she could legally adopt Holly. But since Nicole asked Eric to raise her kid after that letter was sent, perhaps Eric has a claim with Brady was a witness. I did disagree with Brady’s assessment that Nic only asked Eric to raise Holly because she was trying to save his life. That’s ridiculous. Brady should be supportive of his friend and bro but stay out of it. Since Chloe’s rarely seen with Parker, will Eric use her lack of mothering skills against her?

What Kayla and I don’t get is why the hell Sarah cares either way who gets custody of Holly. She should not be this invested. That’s annoying AF, and so is seeing Sarah and Eric act as if they’re BFFs or dating when they’ve known each other six days.

And wait. Maggie thinks of her children morning, noon and night? Please…stop trying to paint characters to be something they’re not. I’m not bashing her mothering skills but she’s been focused solely on Victor for years and rarely mentions her kids except for Saint Daniel. Let’s keep it real.

A sweet send off

Lucas’ goodbye with Kate and his family was poignant. The last scene of him waiting at the Horton square for his Uber and reflecting on how Salem will always be his home, while vowing to return was bittersweet. Hopefully the next time Lucas returns they’ll write him with more of a comedic flair the way they used to.

The older of the grudges

Happy Anniversary to Susan Seaforth Hayes, who celebrated 50 years on the show as Julie Williams. What a feat. We’re fortunate to have her. And as much as I love Julie, there are times when I just want her to shut it when she drones on about hating on Gabi because she sounds like a broken record, however; this time she must feel vindicated for being right all along and it’s fitting that she is the one to try to out Gabi for gaslighting Abigail. It was juicy that Gabi caught her red-handed in her room with the paternity results but I’m not happy at what’s coming next week… I really love how Ron C is using our biggest vet on the show in a principal storyline and that he gave Julie a lovely flashback episode. My concern is what will become of Gabi after this storyline ends.

This is an opinion column. You may agree with some of my thoughts or none. Either way, I want to hear from you. Please be respectful as you dish about your opinion on this week’s episodes.

Julie, “Look. Mistletoe.”
JJ, “Julie, where did you get that?”
Julie, “Oh one of those little pop up stands on University Parkway. Why?”
Eli, “It’s mistletoe pot.”
Doug, “Well, now that’s festive.”
Julie, “First the pot donuts, now this.”
JJ, “I hope you know I’m really sorry about that Book Club thing.”
Doug, “JJ no apology necessary. That’s the most fun Julie’s had in years.”

Leo to Sonny, “Are you going to marry this burning hunk of love or throw your life away?”
Leo, “Mother Kiriakis is that any way to talk to your future son-in-law?”
Sheila to Adrienne, “Yo Adrienne.”